By TerryYong 6309
Published on 27th October 2013
Just barely a month after my whirlwind USA vacation, I had to make a working trip to Bhutan. The trip was planned kinda late and while trying to obtain the tickets for the desired dates, the travel agent could only give us departure direct from SIN to Paro on Drukair in Economy, but on the return date due to no flights to SIN, we had to fly Business Class to BKK as Economy was full, followed by SQ in Economy to Singapore. As I was 'ineligible' to fly J due to company policy, I had to top up a shockingly low S$100 to fly Business Class on the Paro-Bangkok sector! Of course I would be willing to pay! Apparently Drukair prices its tickets such that the fare difference between Economy and Business is normally about or less than USD100 per sector!

Drukair currently only has 3 A319s and 1 ATR42 to operate its network. Due to the operation hours of Paro Airport, which closes at 12pm due to strong winds, all Drukair flight would have to arrive and depart Paro before 12pm. Thus this explains why all Drukair flights would overnight in other destinations, SIN included. Our flight had arrived in the afternoon the day before and had overnighted at Changi, operating the day's early departure at 0630hrs to Paro via Kolkata. The very early departure is to enable to aircraft to reach Paro early and turnaround to another destination before the airport closes.

On the day of departure, I arrived at the airport at 0430hrs (another record broken for the earliest morning departure from Changi) to check-in for the group. Drukair still operates in a very traditional manner, with no online-seat reservations nor check-in. Thus any seat requests would have to be obtained upon counter check-in. I requested for front row seats in Economy for the group, which was granted by the check-in agent. However Drukair was very strict with hand-carry luggage and due to some of our hand luggage being overweight, we needed to repack some stuff so that all of us were within the weight limit. Each hand luggage was weighed and tagged as well. Boarding passes were issued on Dnata stock. 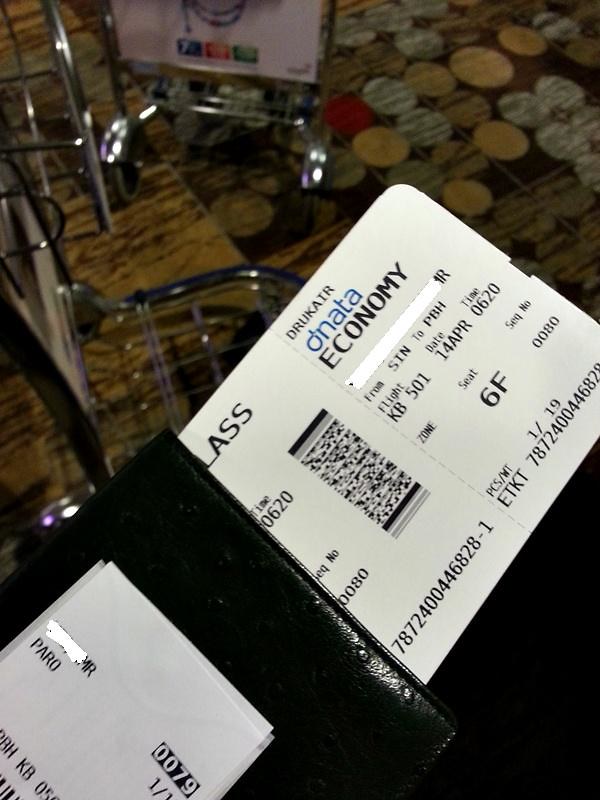 Cleared immigration with hassle, had some coffee in the transit area and proceeded to the gate. Drukair would be departing from Gate C12, which was a bus gate! It had been ages since I had departed from a bus gate at Changi. Apparently as Drukair overnights its aircraft at the remote stand and opted not to tow its aircraft to a proper gate, we would have to be bussed to the aircraft. No worries for me though it might be a hassle for some other passengers. 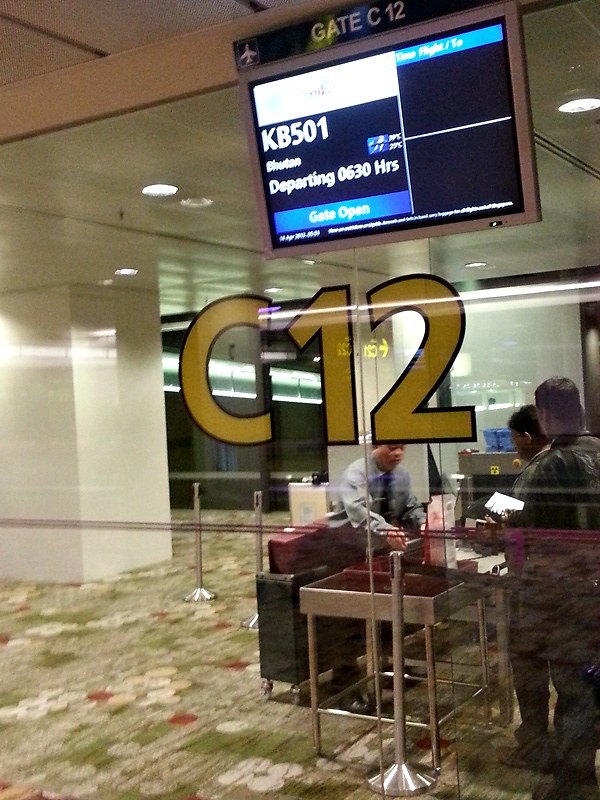 We were bussed to the remote stand just off the terminal building. A5-RGI, Drukair's newest A319, would be operating the flight this morning. 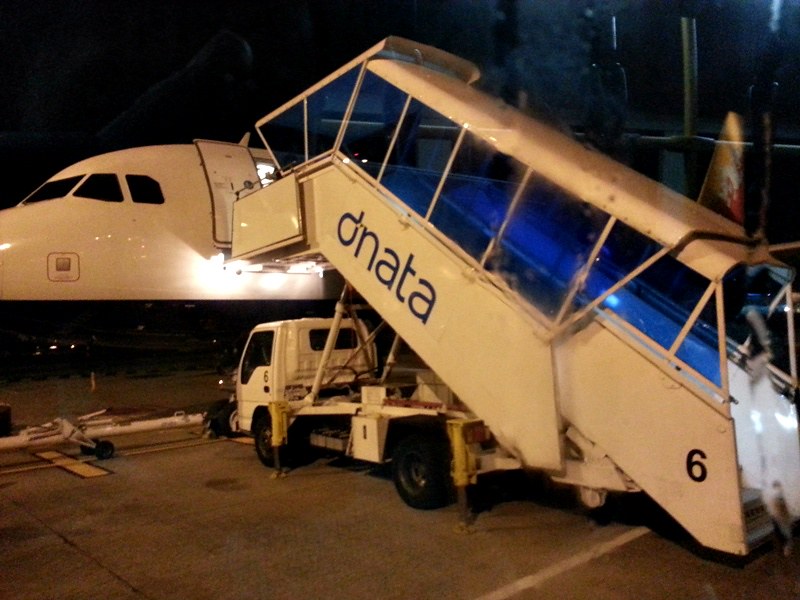 I was in a middle seat today, thus no videos taken. However no worries as the first row of Economy on this aircraft has lots of legroom! There was only a curtain separating Business Class from Economy and thus we can stretch our legs all the way till under the seats in Business! Bags could also be stored under the Business Class seats in front! Seriously, I guess I had more legroom than Business Class passengers! 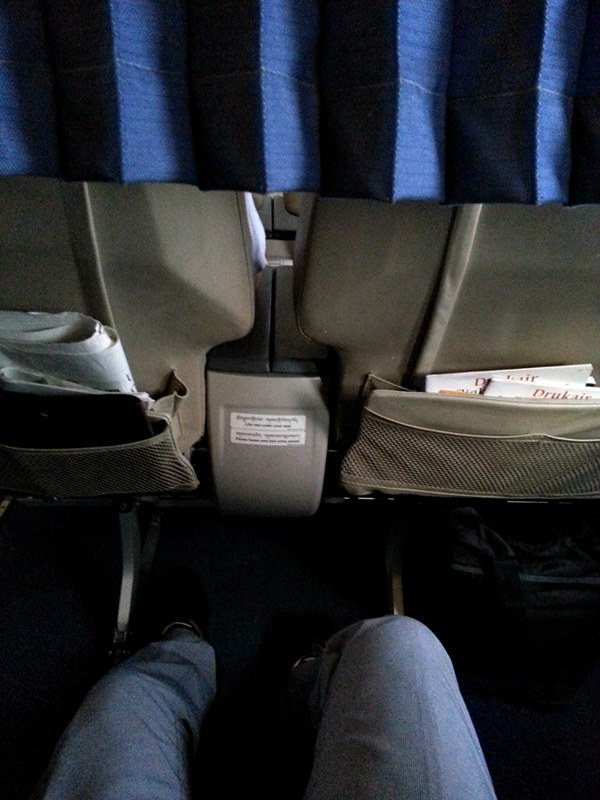 Packed refreshing tissue was distributed after boarding was completed. Flight time to Kolkata was announced to be approximately 4hrs. 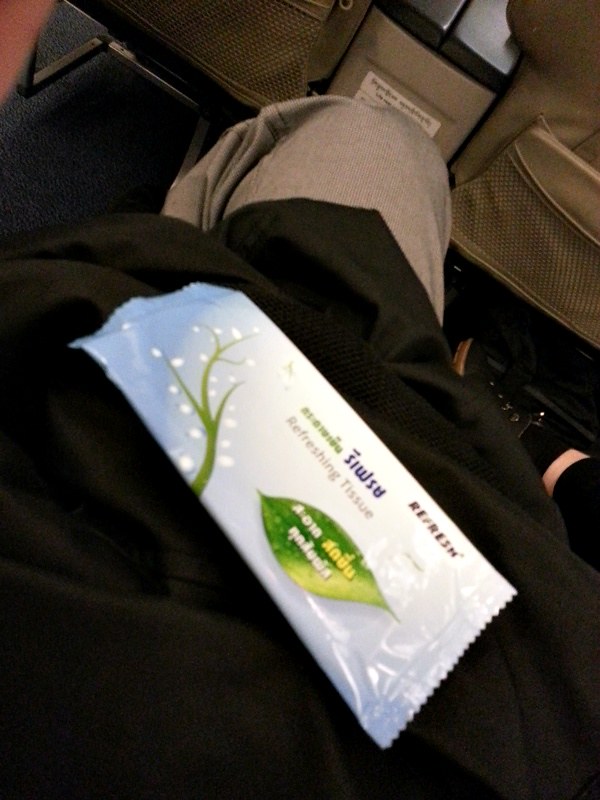 We had a long taxi to Rwy02C for takeoff, bound for Kolkata. Initial ascend was rather bumpy due to bad weather in the area, stretching all the way along Peninsula Malaysia. The seatbelt signs were kept on for almost half hour before it was turned off. 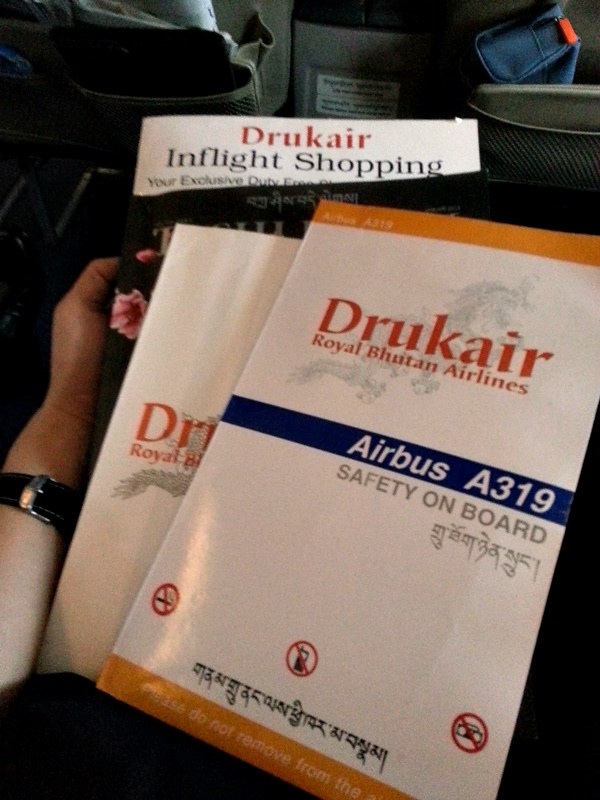 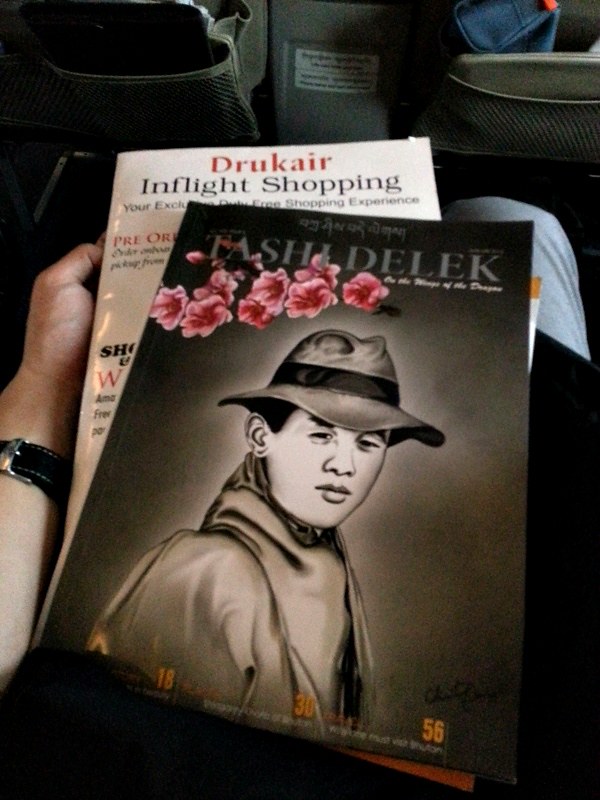 Peeking into Business Class, which appeared to be only half-full. 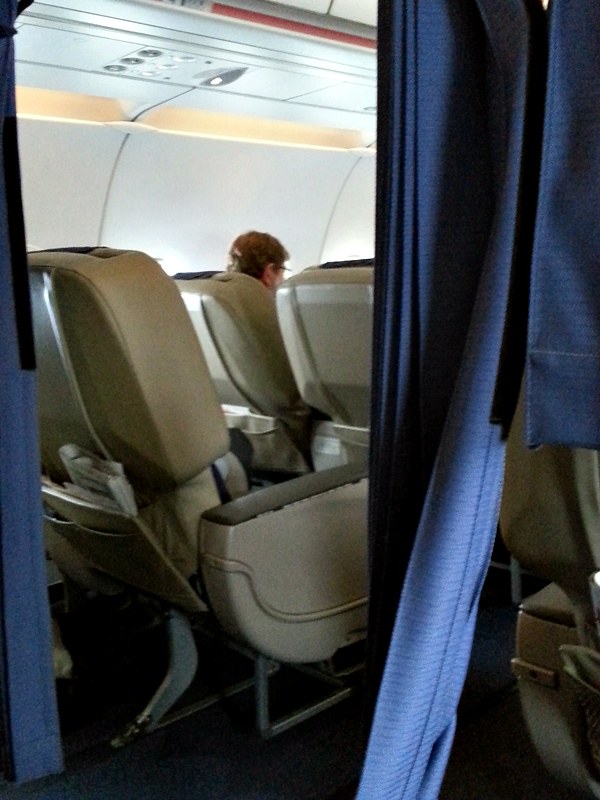 View of the economy cabin. Drukair has recently refurbished all its aircraft in Business Class with new seats and reducing the seating capacity from 20 to 16. Economy Class also got new seats with increased capacity, but apparently this new plane did not receive the new Economy Class seats, but only fitted with new Business Class seats. However the black leather-cladded Economy seats were still rather comfortable.

View of the cabin. Normal rows seemed to have about 30-31 pitch. 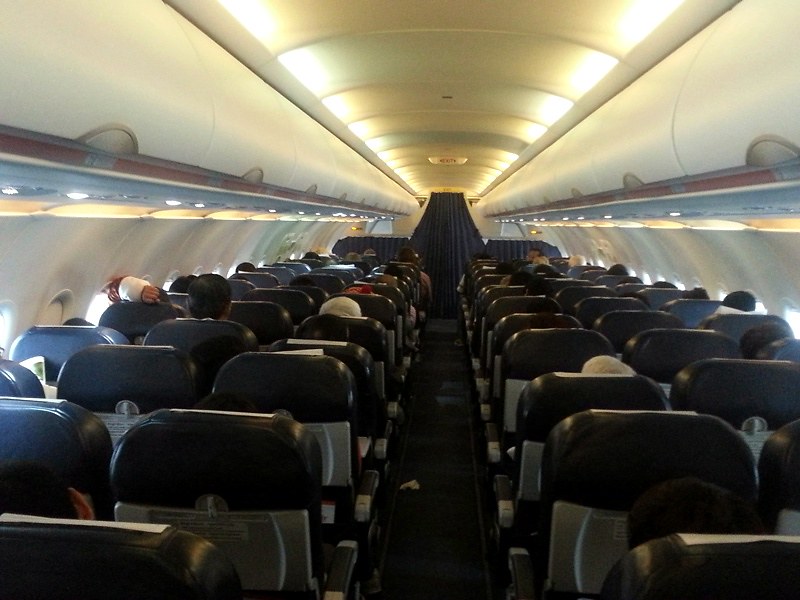 Visit to the lavatory. There were 2 at the rear of this A319. Not much amenities other than the necessary. However there was a floral decoration. 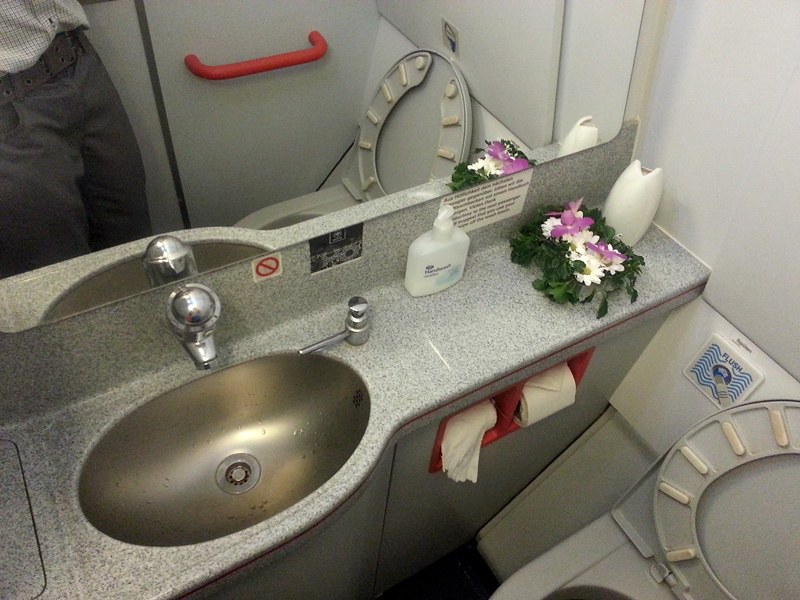 Drukair economy blanket. It was very thin and the blue cotton got stuck on my clothes very easily. Rather poor quality blanket. 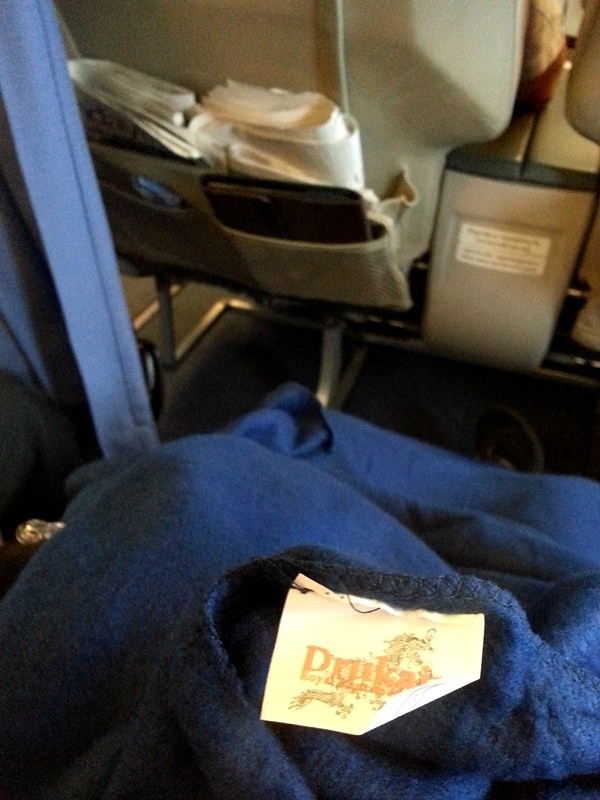 The crew first came down the aisle with a bar cart, offering water, juices or soft drinks. Quite a large selection available. For juices alone, Drukair offers orange, apple and mango. The crew were dressed in traditional Bhutanese wear (photo only on the return) and were not too overly-friendly. However they do get the job done. I had an apple juice from the bar cart.

After the bar service, breakfast was distributed. Today the choices were simple vegetarian or non-vegetarian. Upon clarification, the crew informed that the vegetarian choice was an Indian Prata dish while the non-vegetarian choice was a cheese omelette with sausage and hashbrown. Feeling adventurous, I went for the Indian vegetarian dish. It came with a plain yoghurt, warm croissant with butter and jam (which was yum! Why can't SQ serve croissants in economy??), citrus muffin, fruits and drinking water. I also had a tea to go with my meal. A rather substantial breakfast I must say, and tasty too! 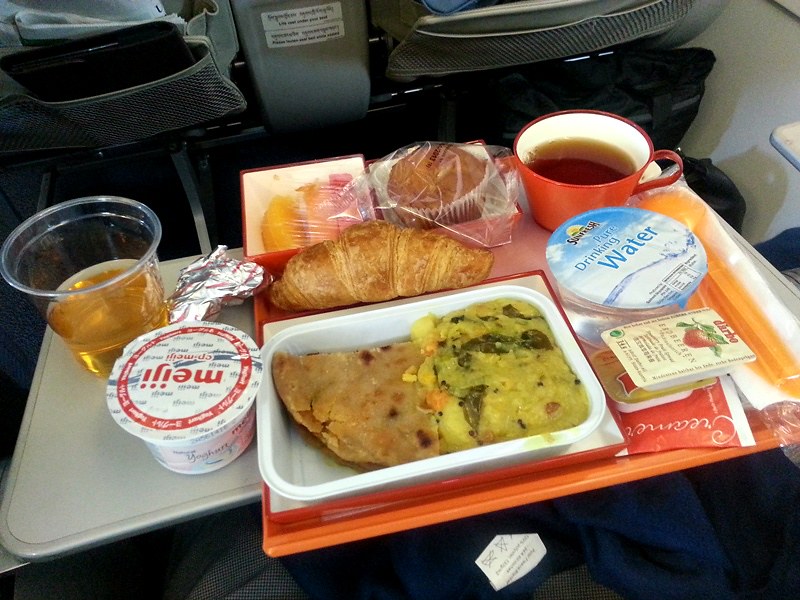 After trays were cleared, the crew stayed in the galley with curtains drawn to have their breakfast. However they do respond to requests for more drinks etc. 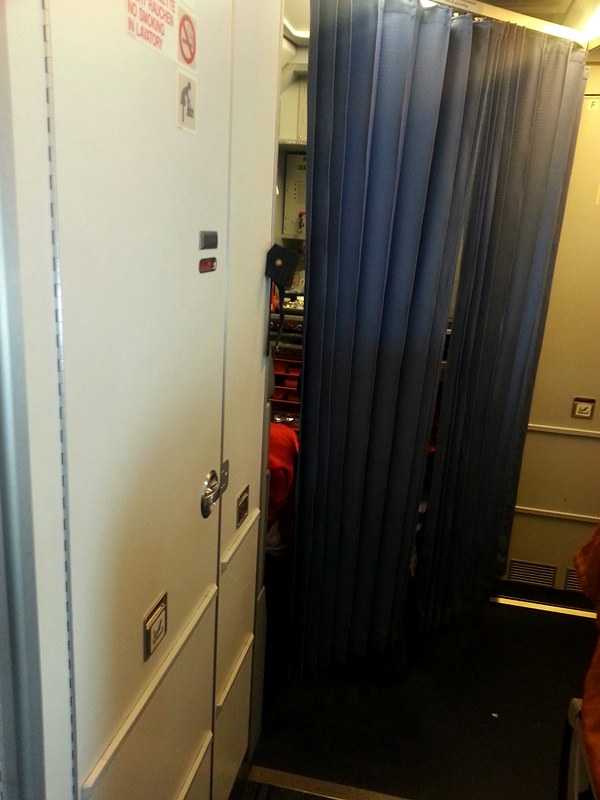 Galley equipment just beside the toilet. The layout of the galley and toilets are different from most other A319/320s aircraft. One toilet is at the side (behind the last few rows) while the other is right at the rear. 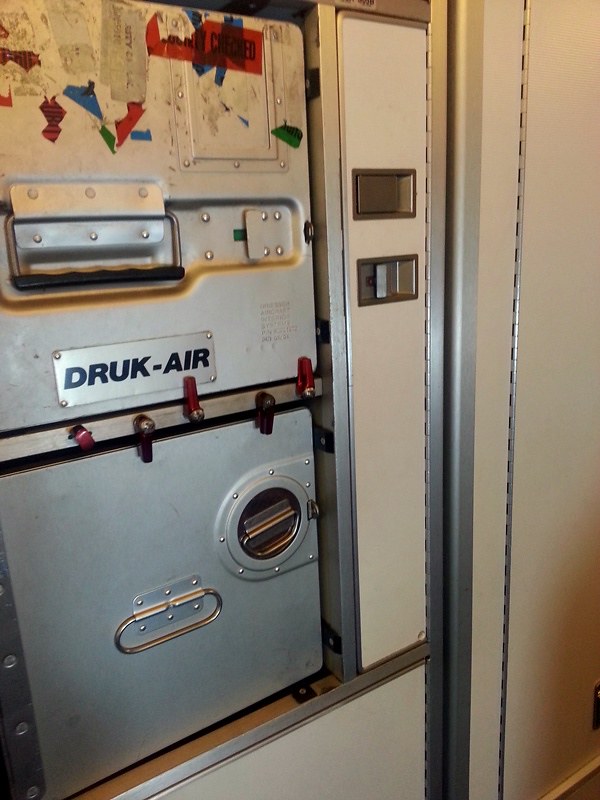 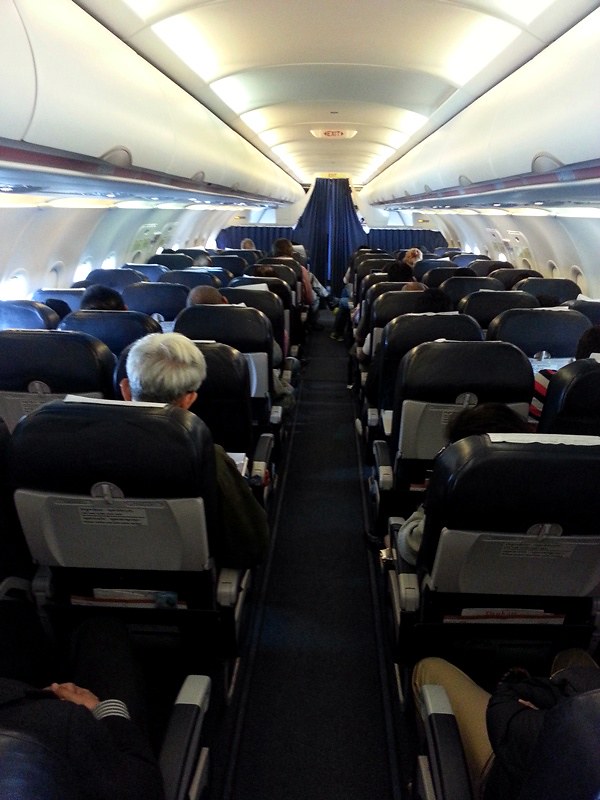 No inflight entertainment available except for the flight map info, which was only shown before departure and probably only 15min during midflight. Here, we were flying at 37,000ft. 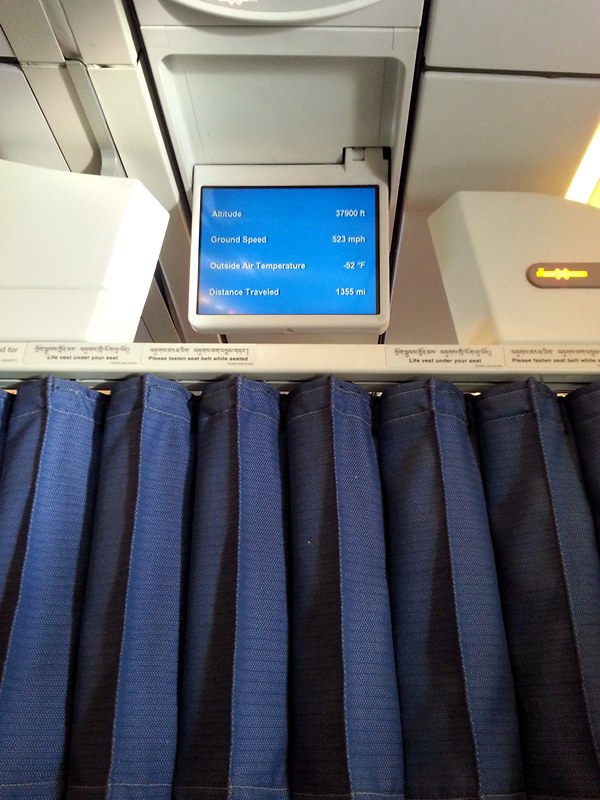 Over Yangon, with 1.5hrs to go. Shortly after this, the overhead monitors were stored away again. Weird… 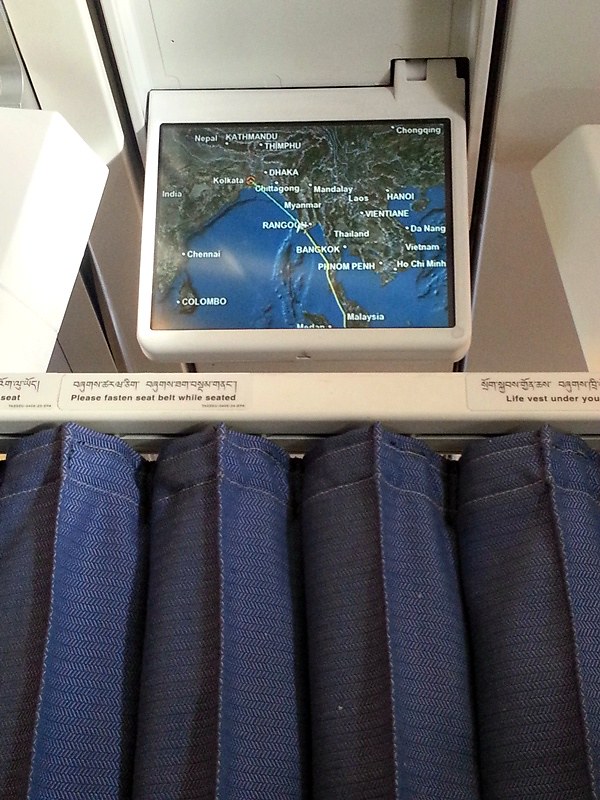 Took catnaps and soon we were approaching Kolkata. Sweets were given out before landing. Landed at Kolkata's Netaji Subhas Chandra Bose International Airport Rwy19L slightly behind schedule due to the late departure and initial detours to avoid storm clouds.
See more

Reasonably comfortable flight for this sector.