#10 out of 68 Airlines A minimum of 10 flight-reports within the past two years is required to appear in the rankings. 199 reviews

By TerryYong 3890
Published on 30th October 2013
Over the long Vesak Day weekend, me and a number of colleagues made a short trip to Kuching for some relaxation and feasting. As the agent in charge of planning the trip, I chanced upon Malaysia Airlines offering tickets over the long weekend for a pretty reasonable price of S$202 per person all-in to Kuching. Not bad a price for a long weekend since Air Asia was only $10 cheaper with no frills added. Guess this is due to their recent additional flights. So we booked and finally the day of departure came.

Checked in was done online earlier and we just dropped our bags at the deserted check-in desks. Surprising, since the flight was fully-booked in economy class. Got our printed boarding passes and cleared through immigration. 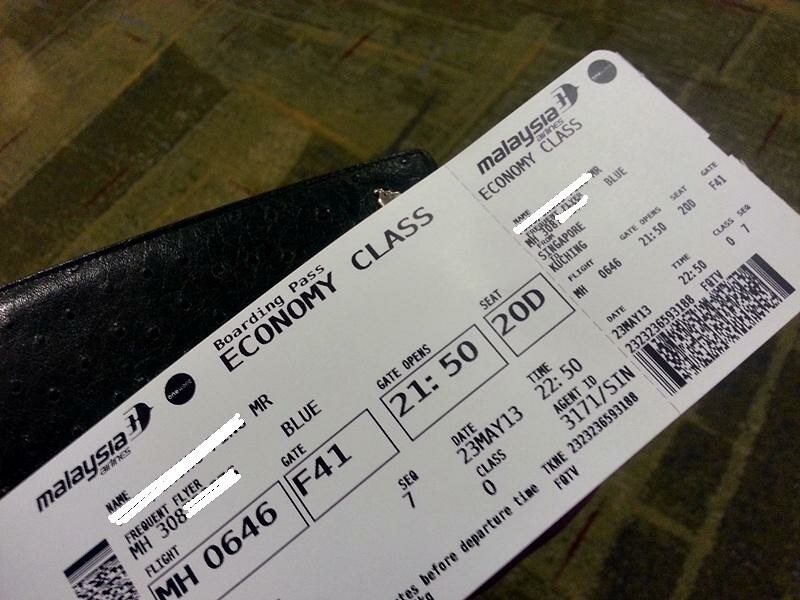 After some duty-free shopping, we proceeded to the gate F41, which was a rather long walk away. Boarding has already started when we reached the gate. Tonight, a new B737-800 with sky-interior would be flying us to Kuching!

One of MH's newer B738s, 9M-MXB would be operating her last flight of the day, ferrying us to Kuching. 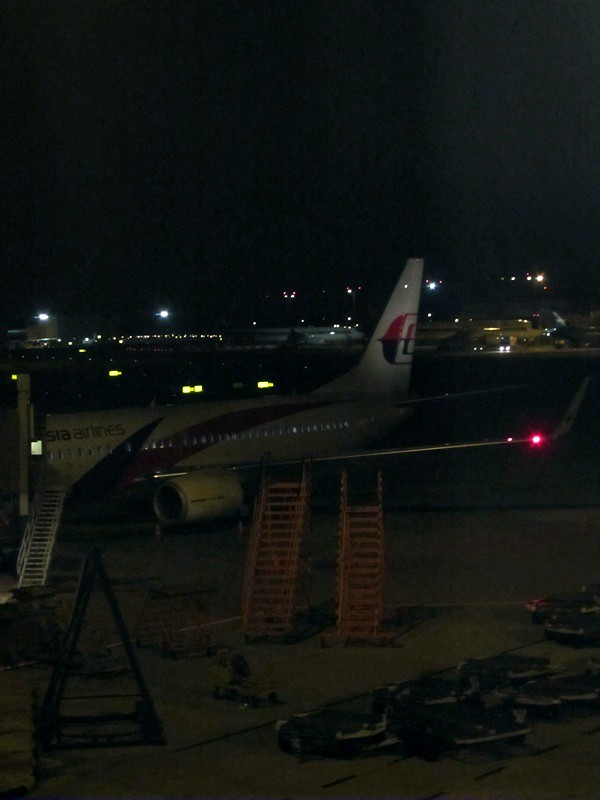 Welcomed by the crew, with newspapers available at the door. Passed through the Business Class cabin, which was not too full. 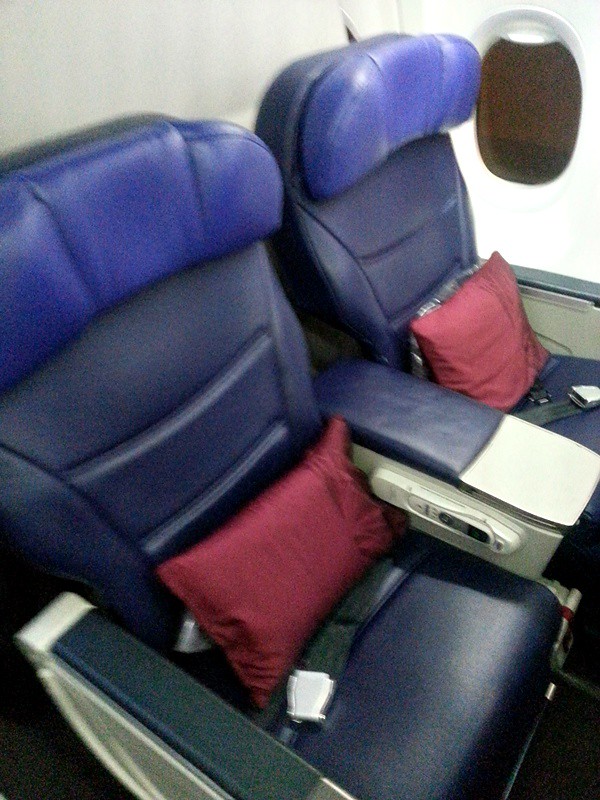 And into economy class, which filled up to the max. We were seated at Row 21, and I had the F seat. 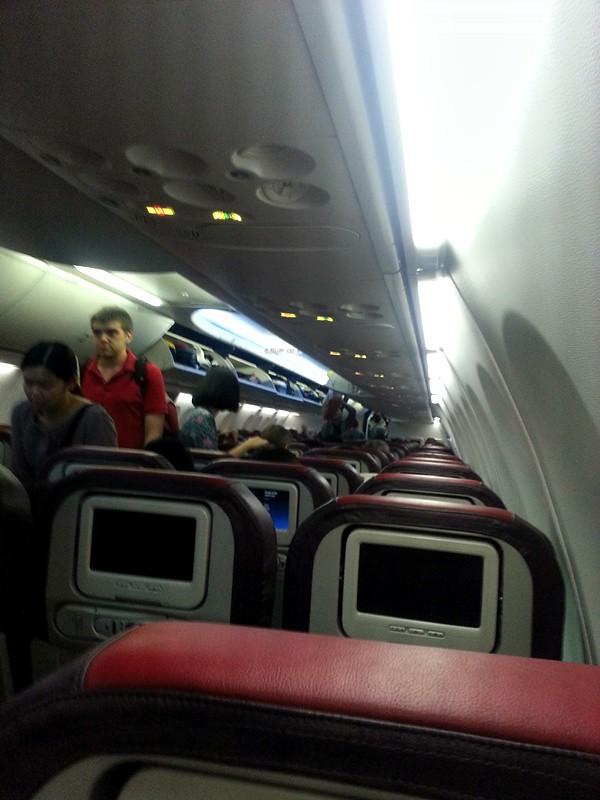 Boarding in progress. There would be 4 cabin crew serving in economy tonight, and 2 in Business Class, for a total of 6 cabin crew. A rather generous crewing. All the crew were rather friendly and assisted much in the boarding process. 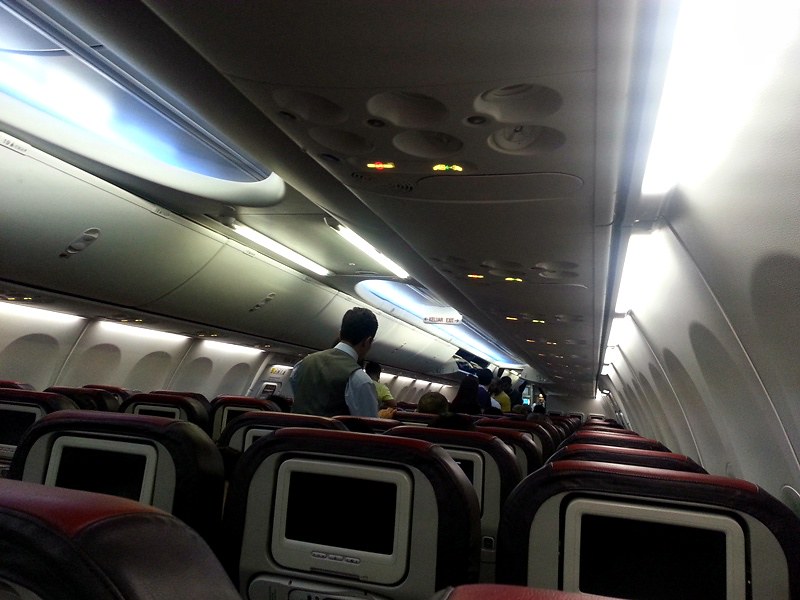 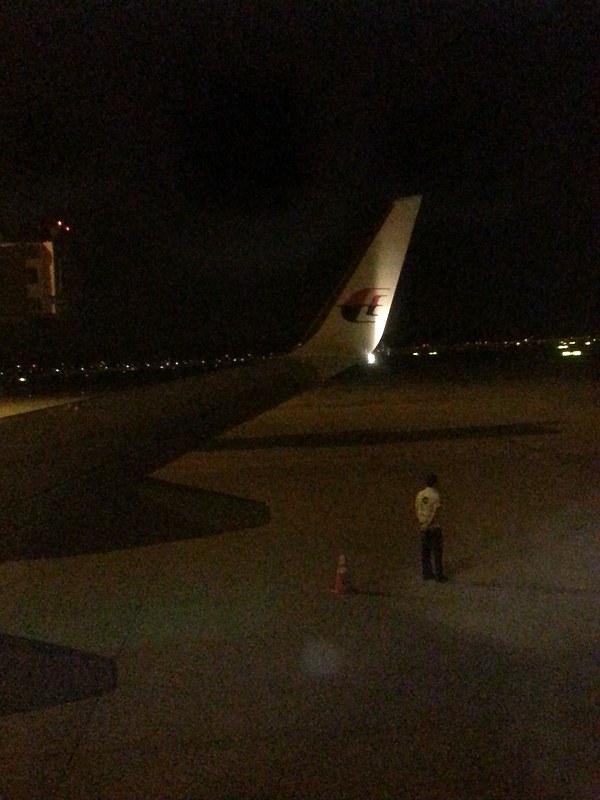 IFE was already switched on, with all the entertainment selections available. However, headsets were not provided but you can use your own headphones. Pillows and blankets were available upon request. Legroom was not the best, but sufficient for this 1hr 15min flight. 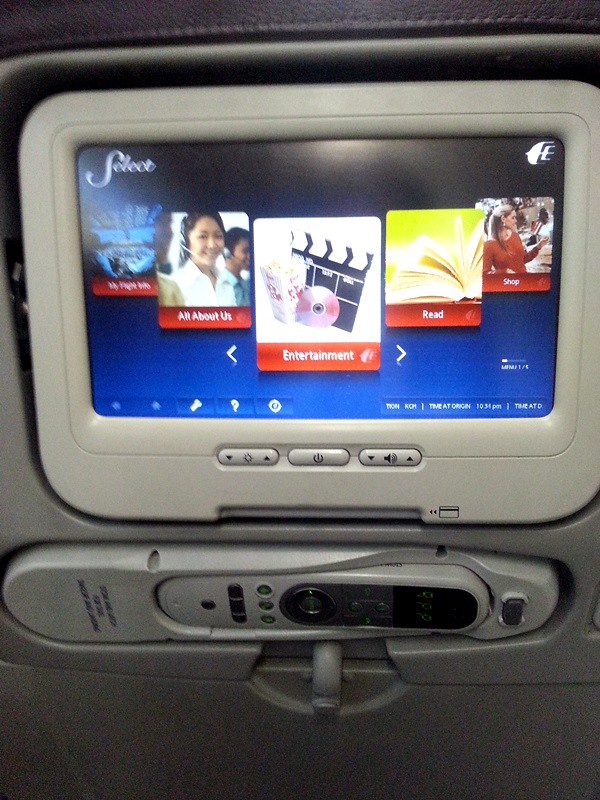 Very swiftly, boarding was completed and cool blue mood lighting were switched on. 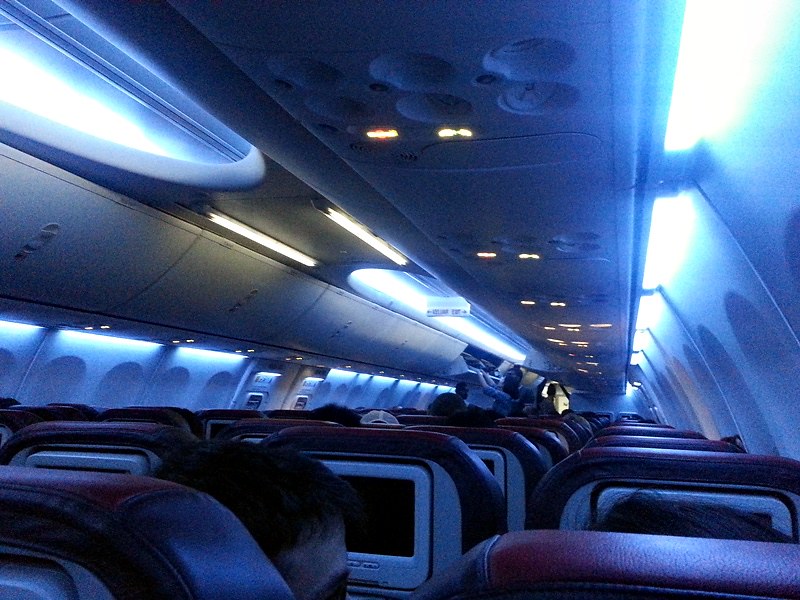 The safety video was played while we pushed back. 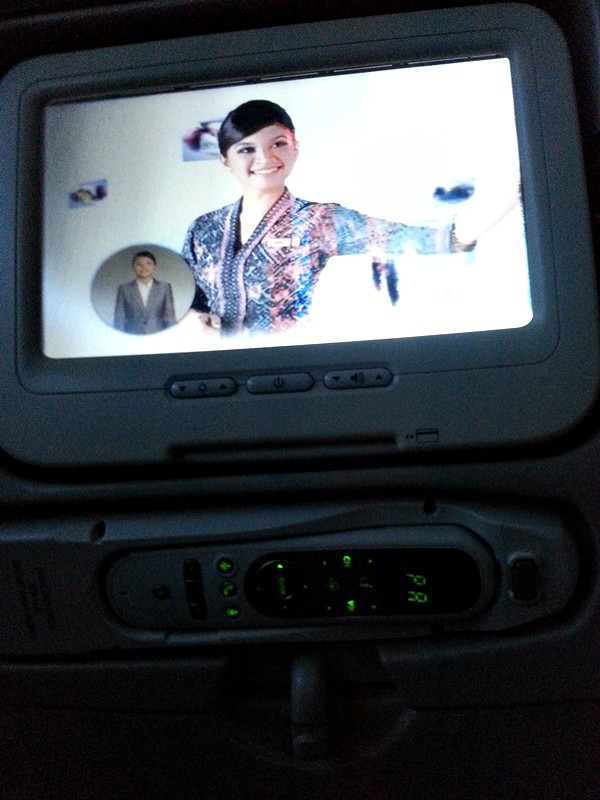 Taxiing to Runway 20C, departing towards the southwest. 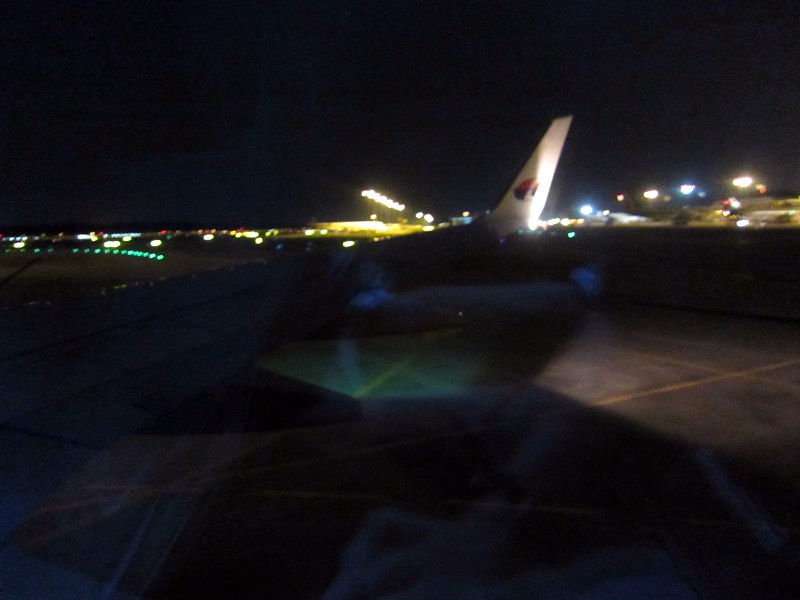 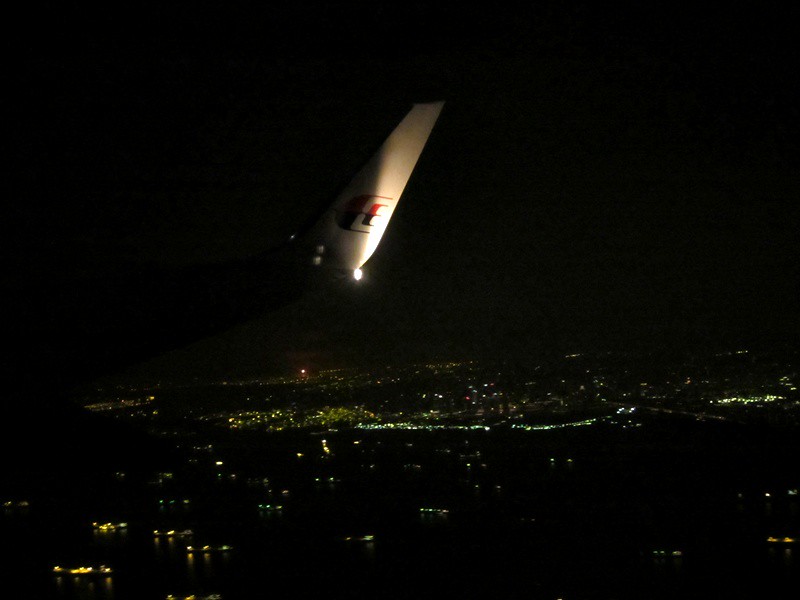 Announcement by the crew after takeoff. As there was slight turbulence throughout the flight with seatbelt signs turned on, no hot beverages was served initially during the meal service. 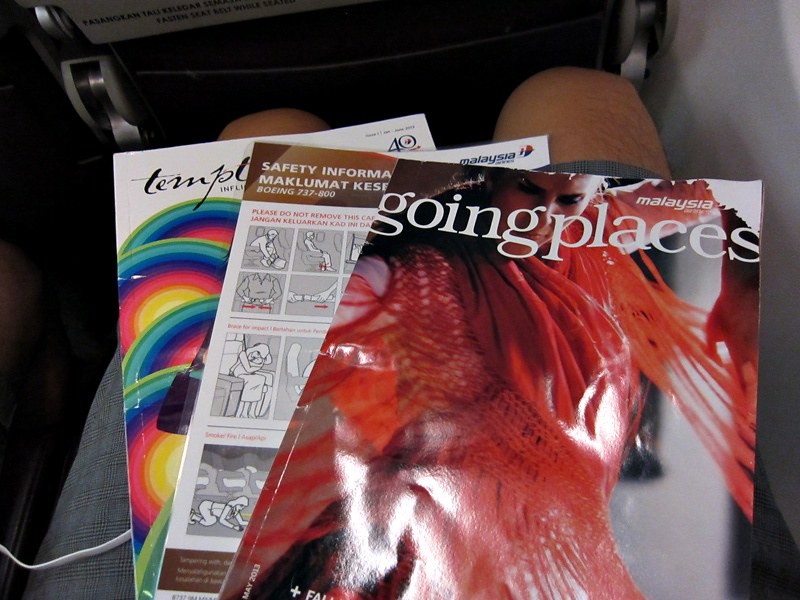 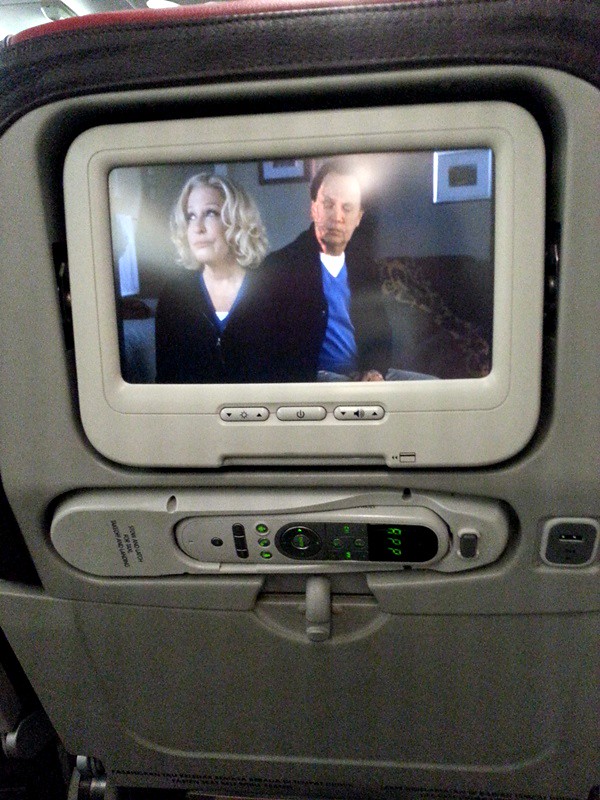 Supper was served very shortly after. It was interesting to observe how MH serves a full planeload on such a short flight with a proper meal. 3 carts were on the aisle with a total of 4 crew members performing the meal service. They were really efficient yet friendly, and managed to pull off the stunt of serving 144 economy passengers within 30min! 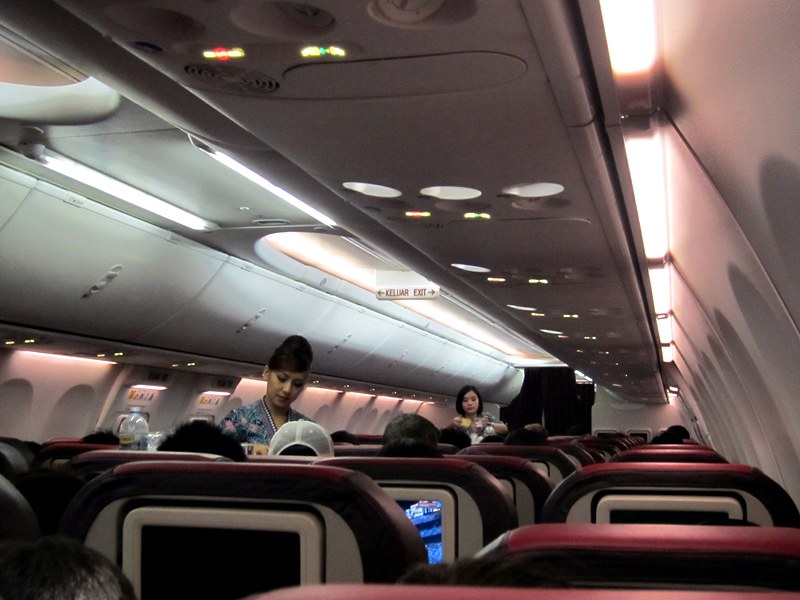 There were a choice of Curry fish with rice or Black pepper chicken with noodles. Impressive! I had the fish choice, and was handed a tray with the main, accompanied with a cake, drinking water and a kitkat bar. I also had an orange juice to go along. 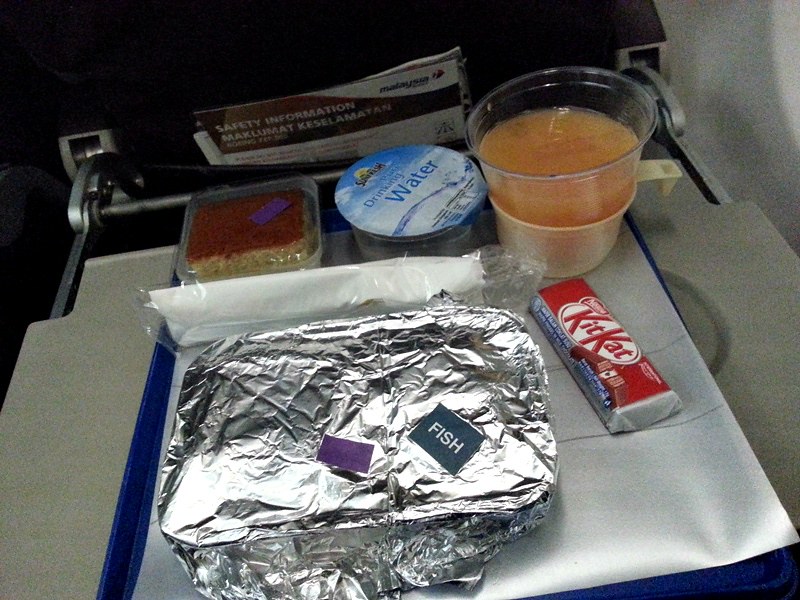 Meal unveiled. The fish came with curried vegetables as well. The portion of the main was rather big! And it was very tasty as well! Well done, MH! 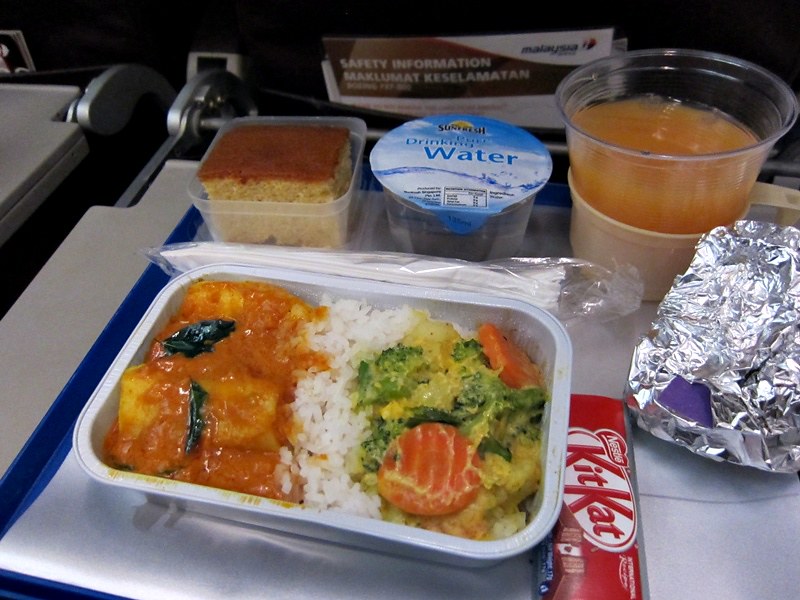 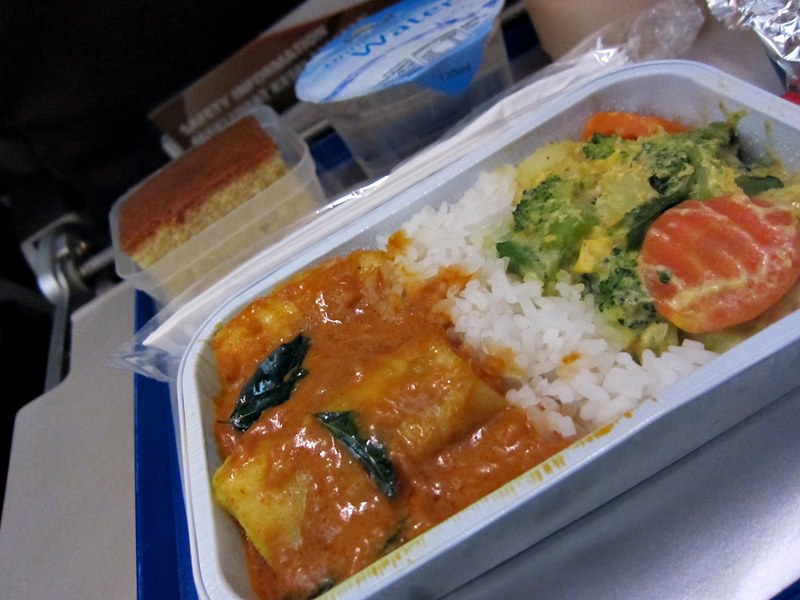 The other choice of black pepper chicken with noodles was equally delicious as well! My colleague commented that it was the first time he finished an entire inflight meal! 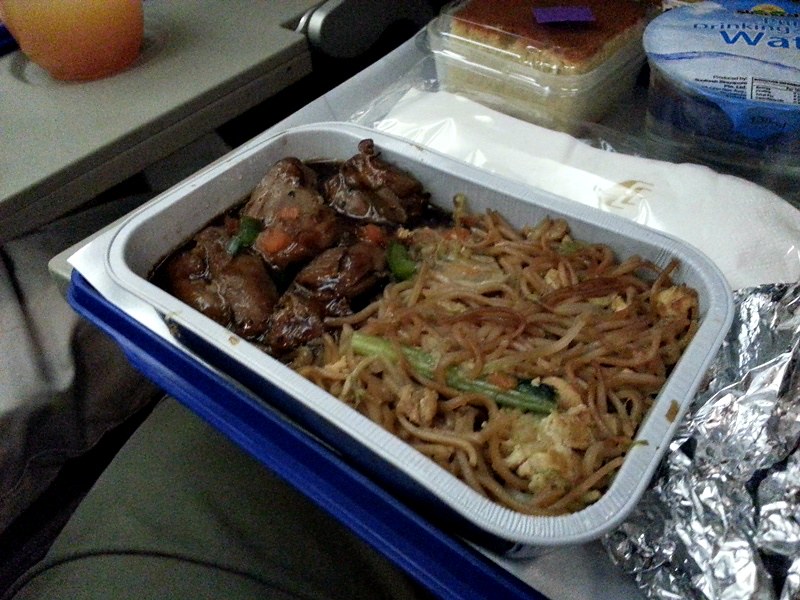 Wiped out everything on the tray. 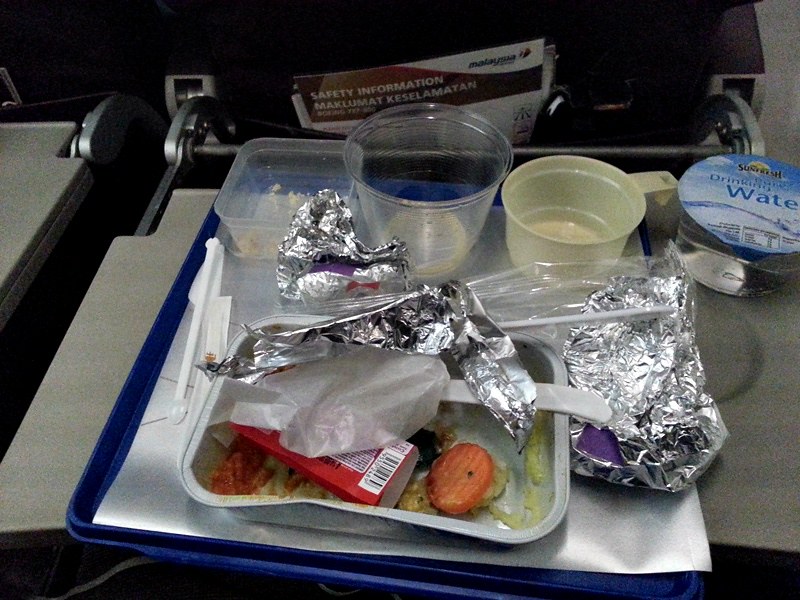 During tray collection, second round of drinks were also offered. The blue mood lighting was turned on again. 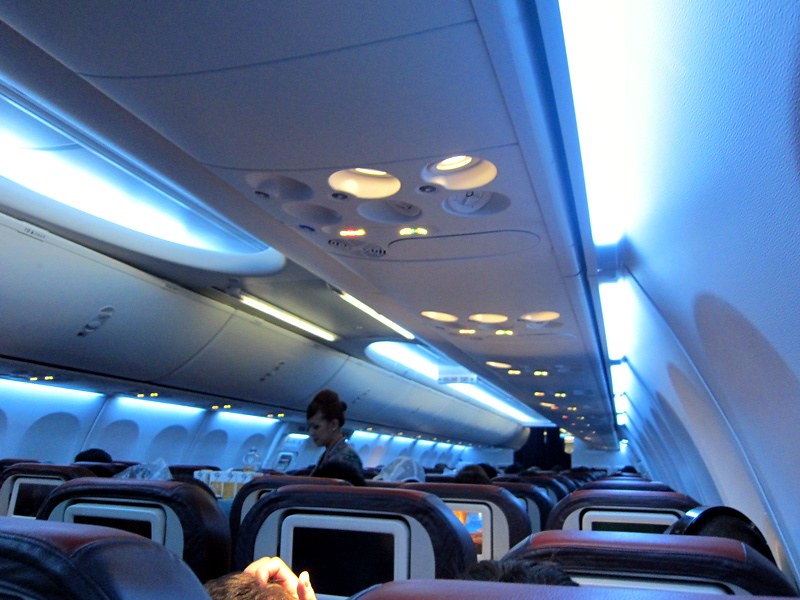 Pilot came on with the announcement regarding flight details.


Time for a bit of Glee after I was done with the movie. 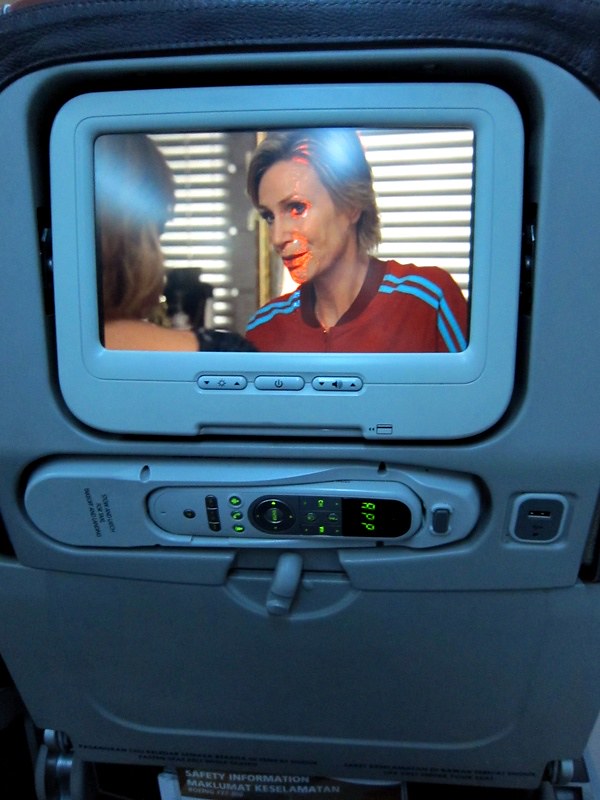 Very soon, we commenced our descent into Kuching. 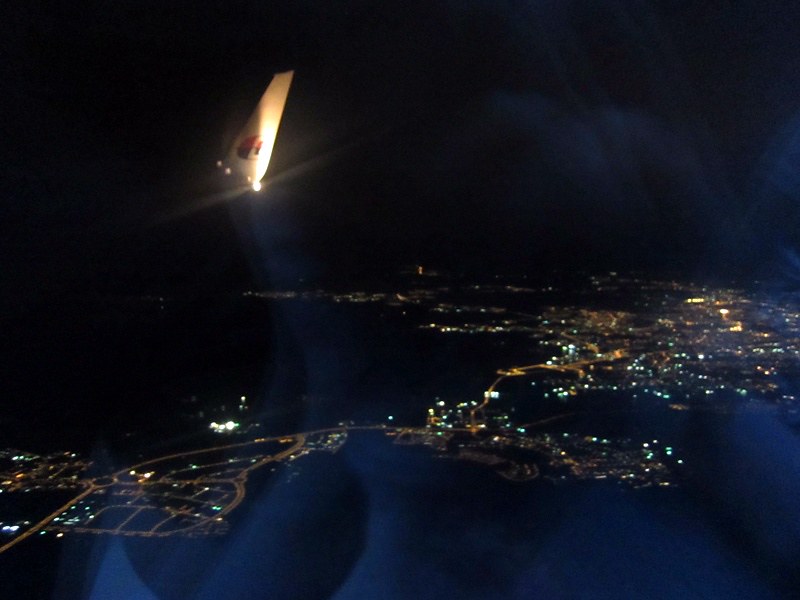 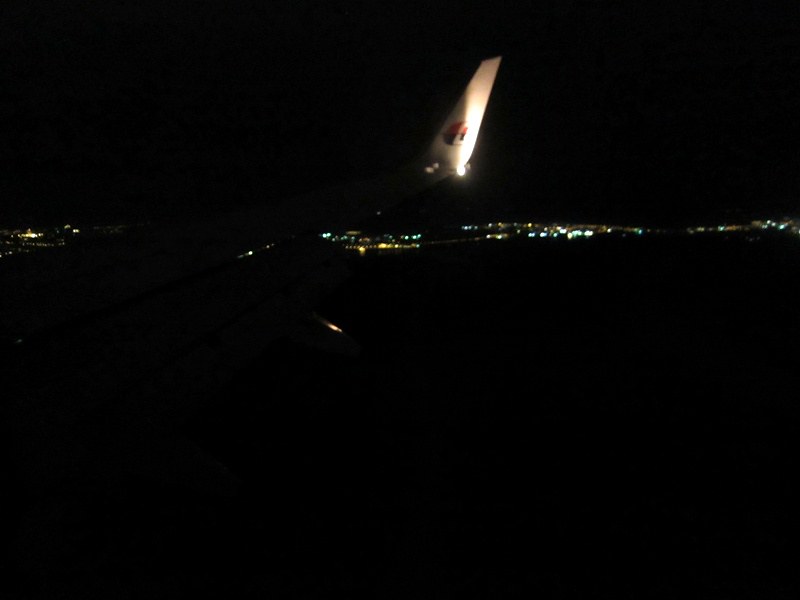 Landing in Kuching Rwy25 and taxi to the gate.


Parked at the gate. 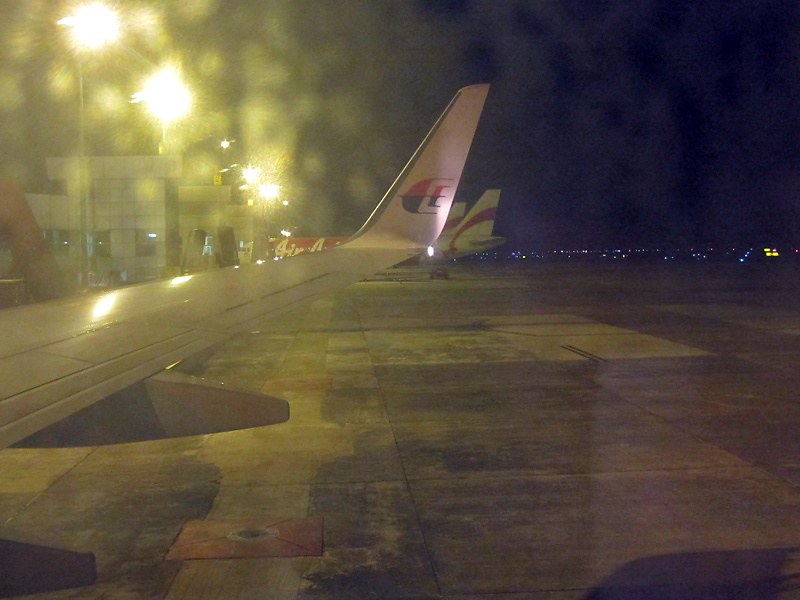 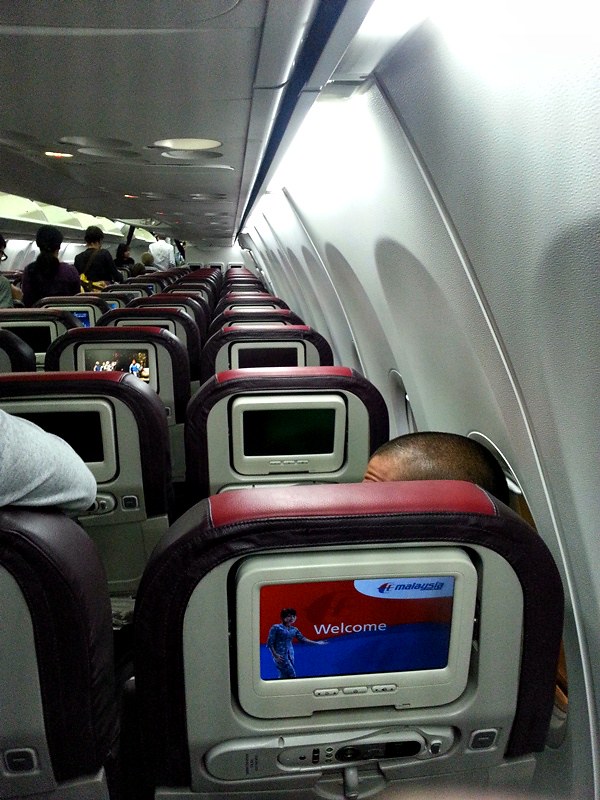 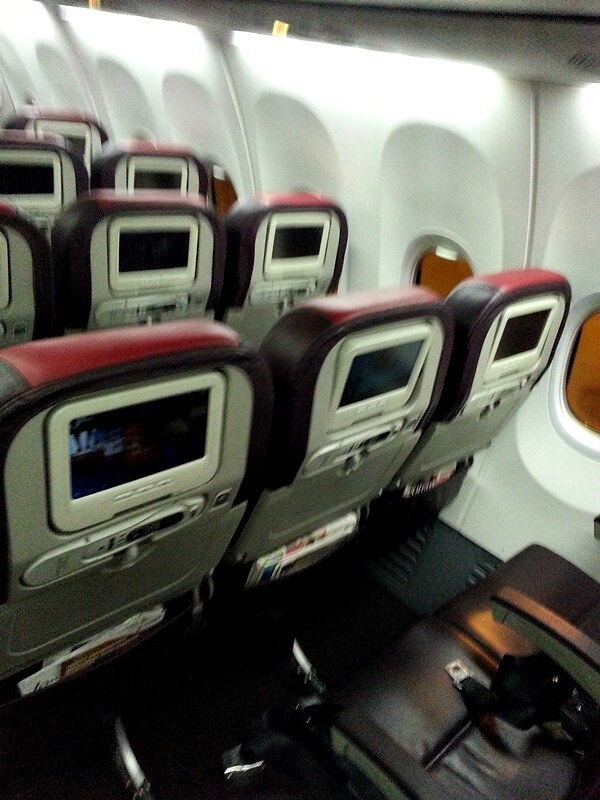 Immigration and baggage claim was swift as we landed just before the 2 flights arriving from KL. Surprisingly, the airport was still rather busy at this time of the night. 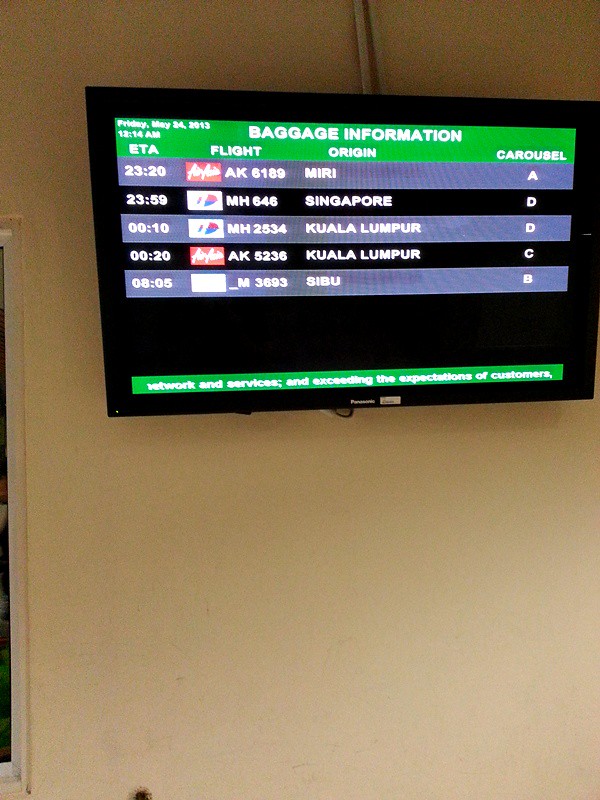 I was extremely impressed with MH's offerings on such a short flight! Tasty meal, great crew, inflight entertainment available (bring your own headsets though) and reasonably comfortable seats made for one of the best short-haul flights I have ever flown on.