By TerryYong 2646
Published on 2nd November 2013
Another short trip over the weekend, this time to Penang with my partner for an even more gastronomical experience! The flight up on Jetstar was partially paid for using my Qantas miles while the return flight on AirAsia was a mere RM99 one-way!

I checked-in online earlier for both of us and selected seats for free. Kudos for Jetstar for allowing free online seat selection during check-in, unlike AirAsia where we were allocated seats a row apart during online check-in and had to pay RM6 per person to be seated together. Boo, AirAsia! I suspect this is a conspiracy of AirAsia to force you to pay and pre-select seats. Next time, maybe I would just check-in at the AirAsia manual counters and request to be seated together. 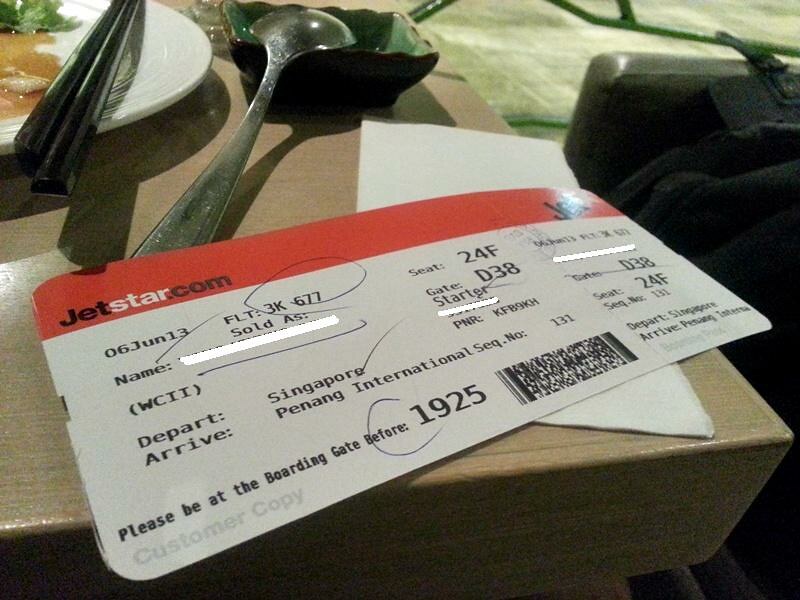 Courtesy of our Priority Pass and Maybank Horizon Platinum credit cards, we went to The Green Market at T2 to grab a light dinner. The cards allowed us a set-dinner each. For information, Maybank would be discontinuing complimentary set meals at The Green Market effective from 01 July 2013. The set meal consists of the following:


Soups and appetizers from the appetizer buffet, hot green tea and a cold drink. 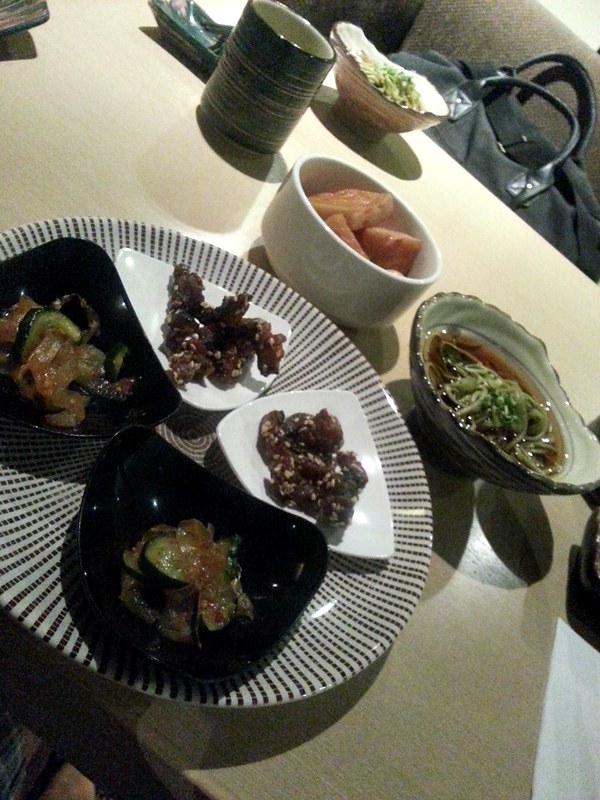 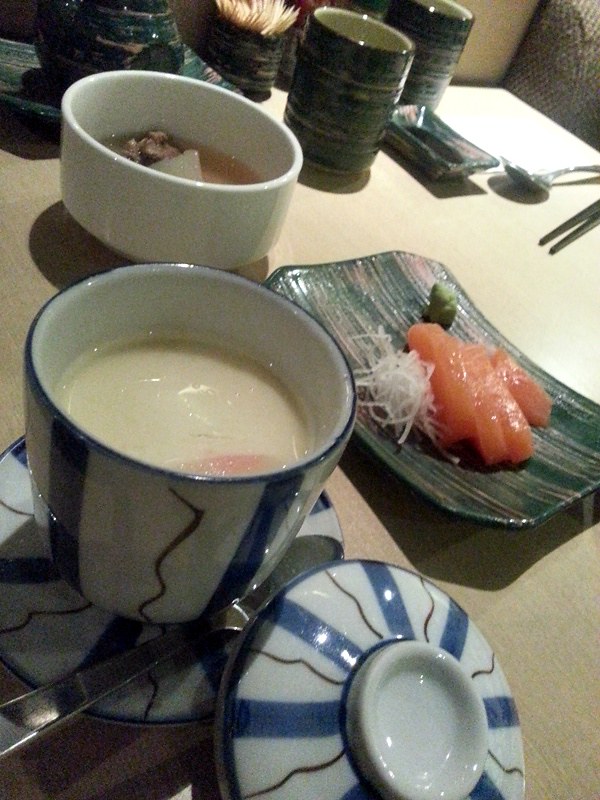 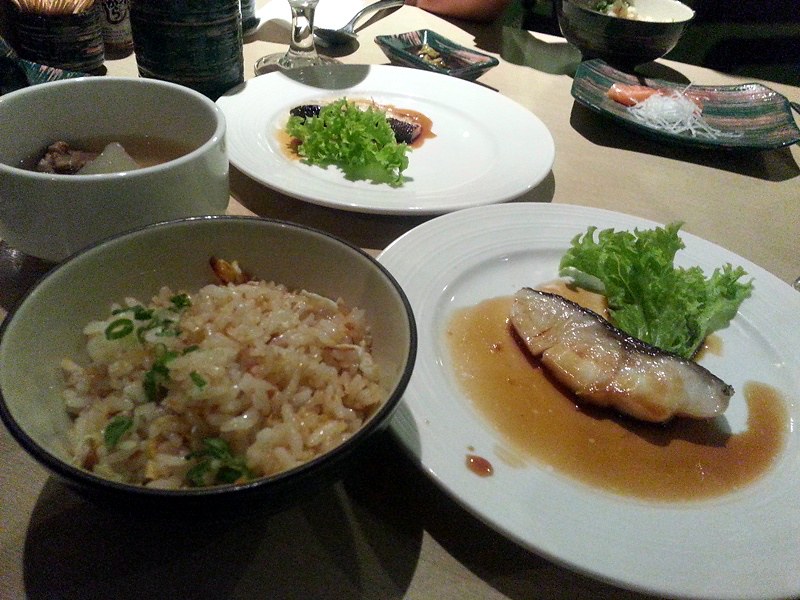 After the quick dinner, we back to T1 gate D38 for the flight. The gate was a bit of a trek and boarding has just started when we reached the gate. The flight appeared to be rather full this evening. 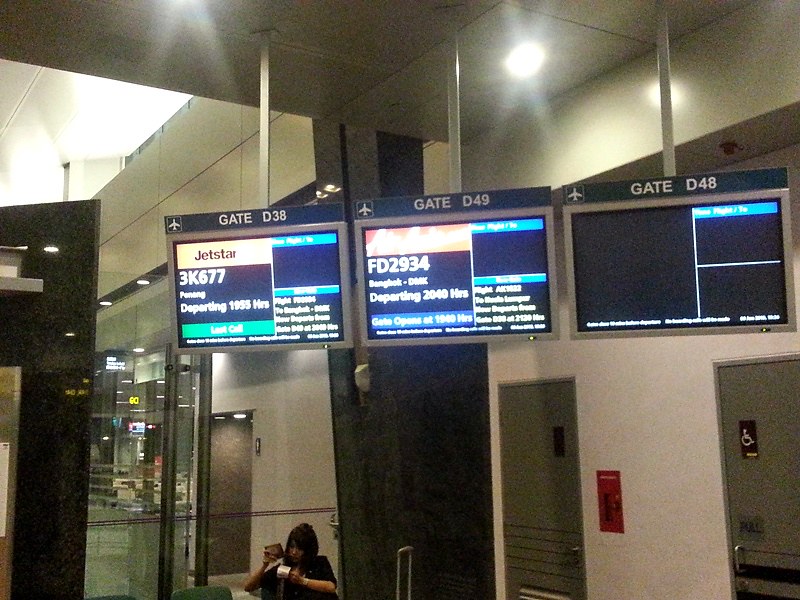 
Boarding the plane immediately but there was still a queue in the aerobridge. No photos of the plane as there were no decent views of the aircraft. 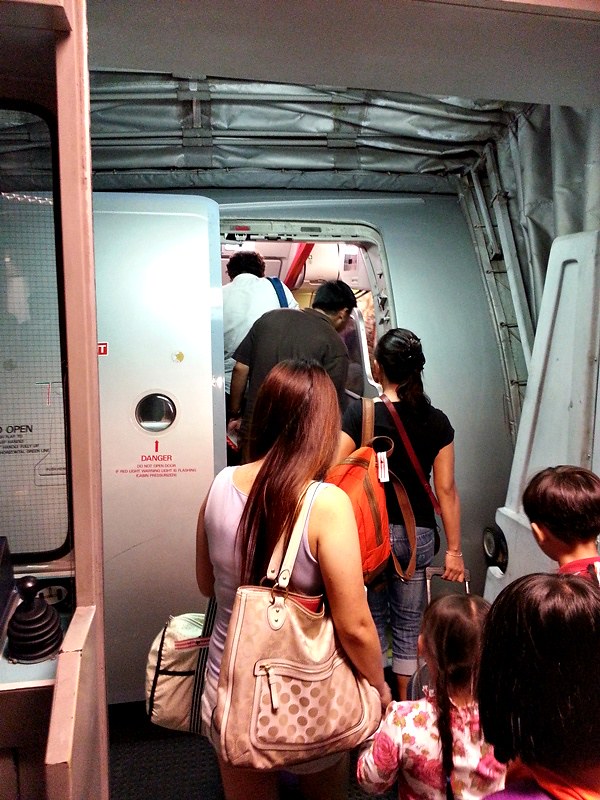 Welcomed aboard by the friendly crew-in-charge and proceeded down the aisle. The cabin of this 8 years old airbus looked yellowish and old, but was kept clean. Rest of the crew along the aisle were proactively guiding passengers to seats and assisting in storing of cabin bags (much more proactive than SQ I would say). Everyone seemed to be utilizing the 10kg cabin baggage limit on this flight! I was extremely impressed with the Jetstar crew managing to find space in the overhead bins for everyone! Guess they must already be experts in doing this. 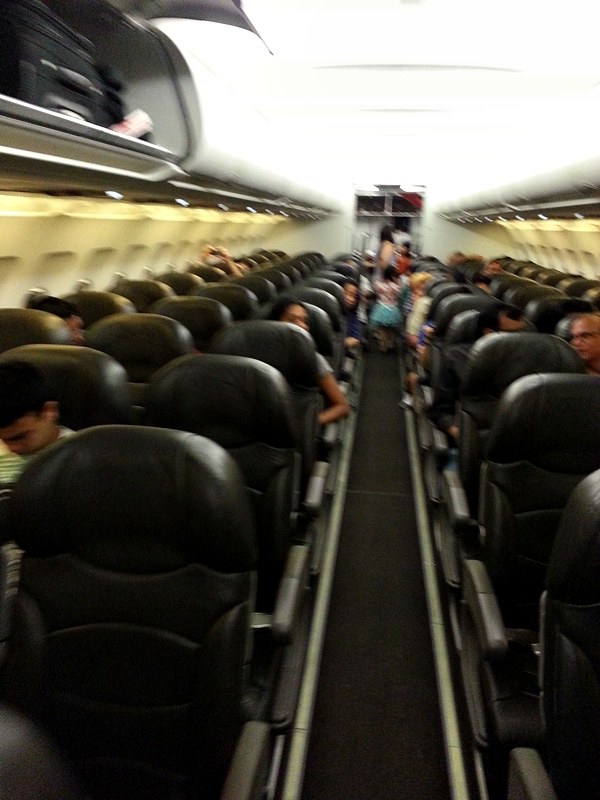 Crew assisting with storing of cabin bags during boarding. 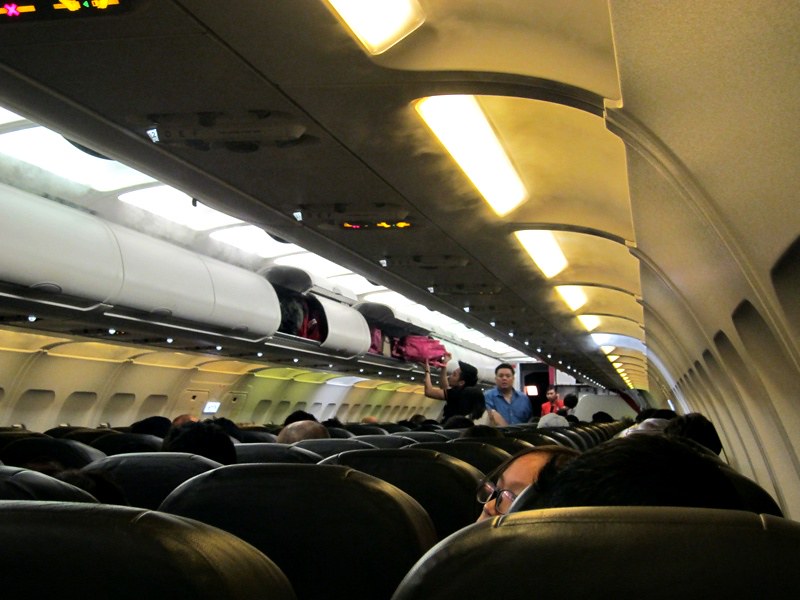 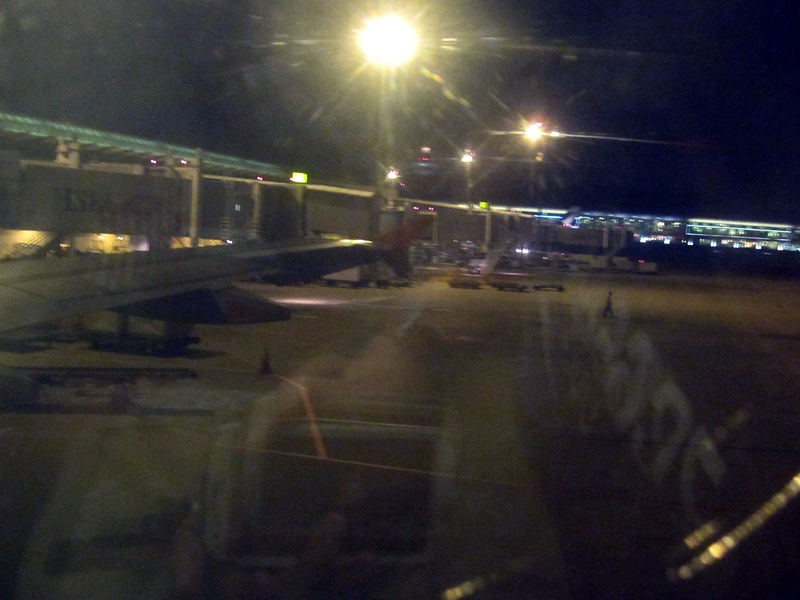 Seat pitch at row 25 was, in one word, pathetic! However, I heard that Jetstar's newer A320s have better seat pitch as the seats are slimmer. 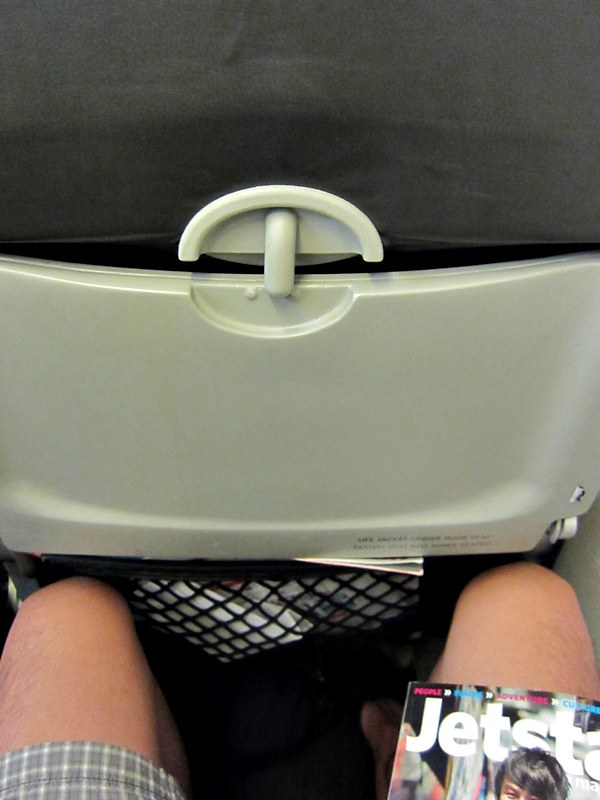 All the magazines in the seat pocket. 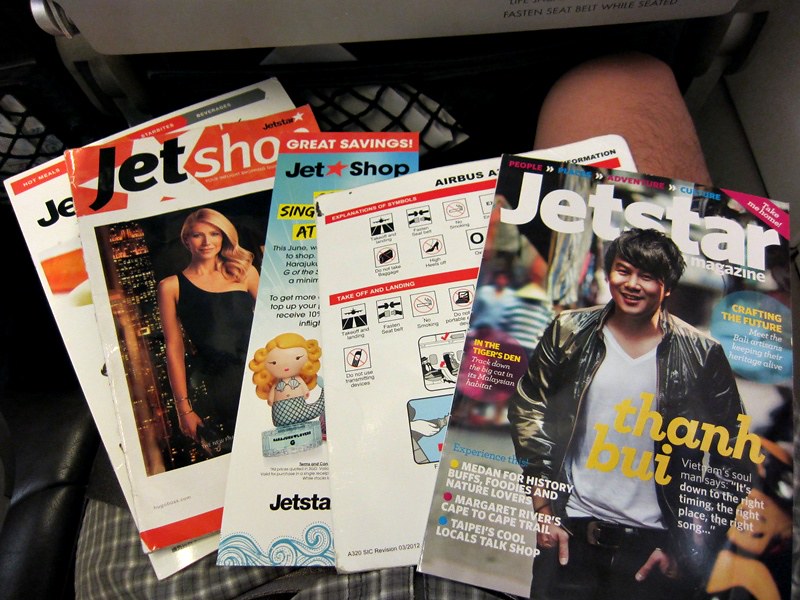 Doors were closed on time and flight time was announced to be about 1hr. Pushback and safety demonstration was performed by the crew.


We had a rather long taxi to Rwy02C, but it was cut short as we turned onto the runway at around the 3/4 mark and took off immediately.


After seatbelt signs were switched off, crew first came down and deliver pre-ordered sandwiches and drinks, followed by the buy-on-board snack service. Not too many takers for this though. Crew were all smiles and remained professional throughout the flight. 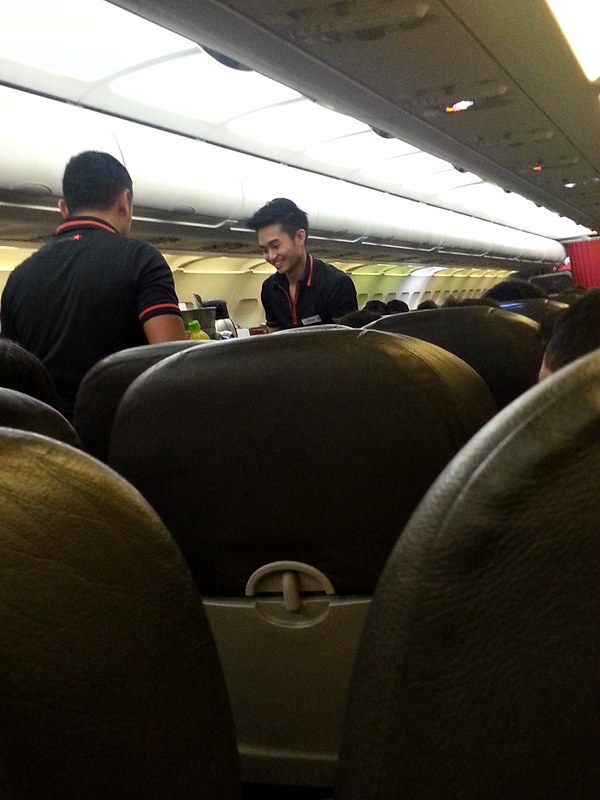 After the snacks cart as rolled down, it was followed by the duty-free sales cart. Again, not many takers. 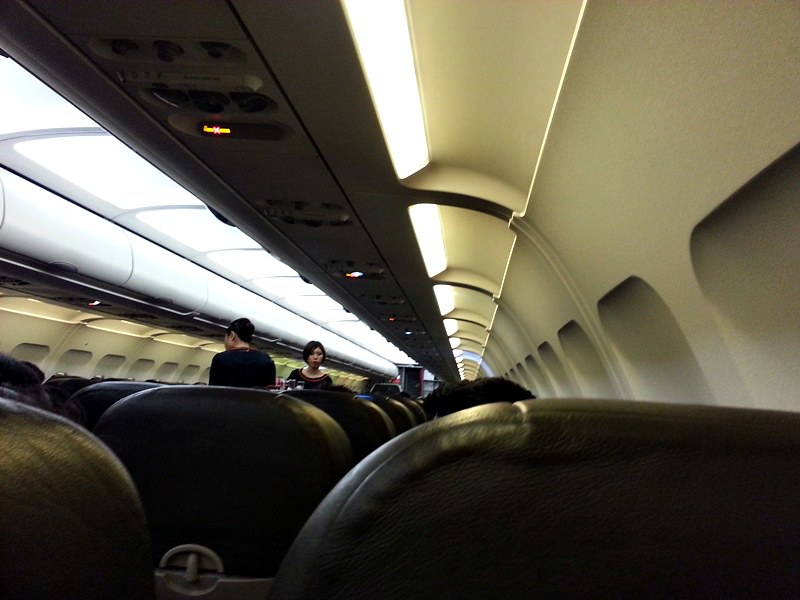 View of the cabin. 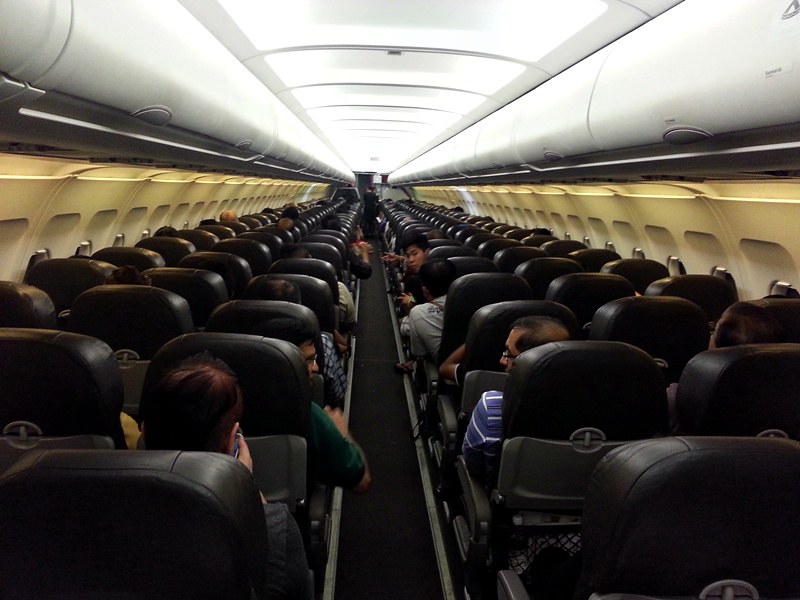 Very soon, we started our descend into Penang and landed on Rwy04 10min ahead of schedule.


Penang International Airport has undergone a massive upgrading project, and the exterior of the terminal as well as the transit area was totally different from what I had seen last year. Parked at the gate. 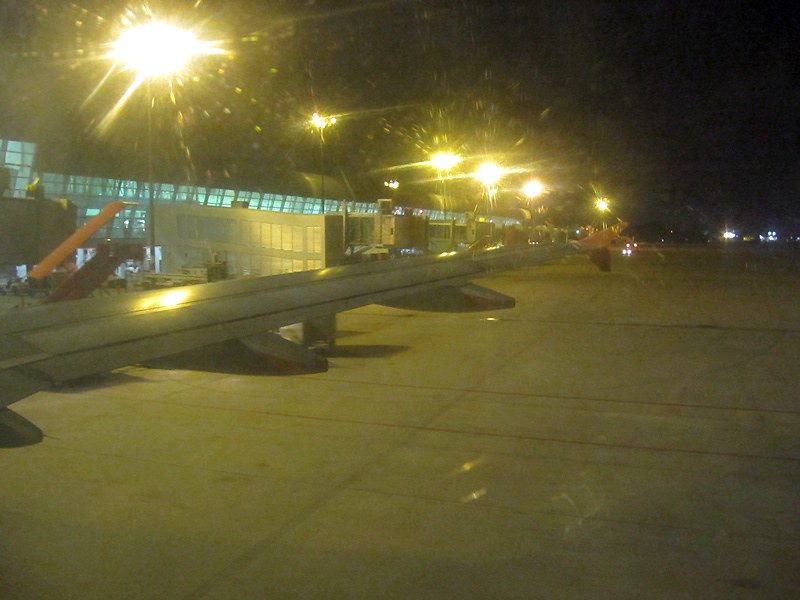 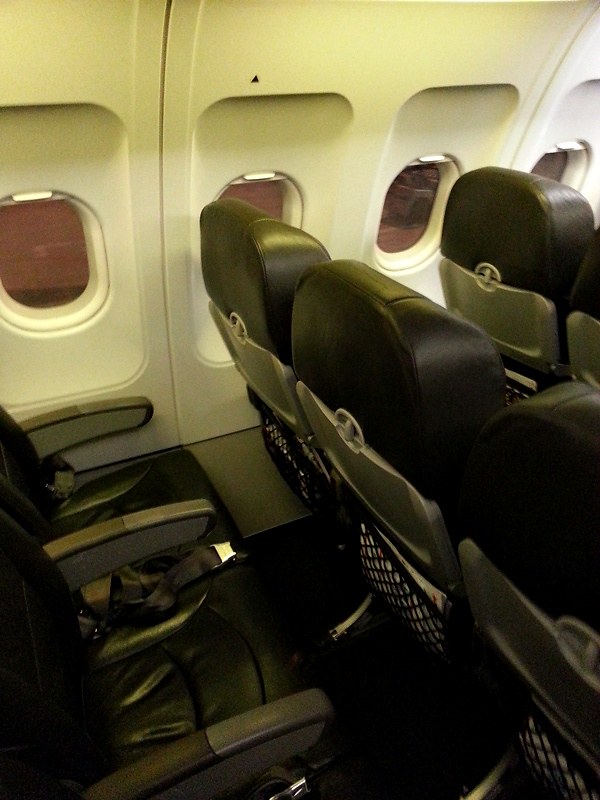 Only a short queue at immigration and we were soon across. At the arrival baggage claims area. 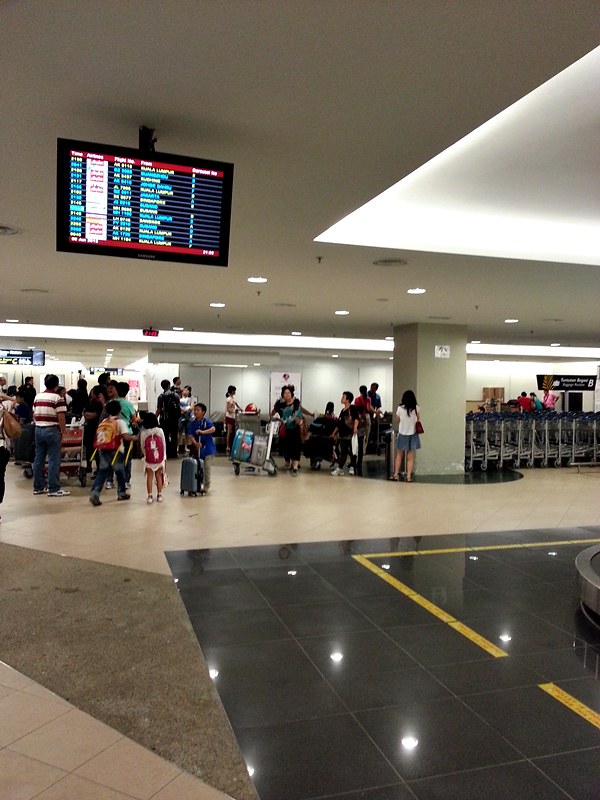 Overall, other than the cramped seating (luckily we had an empty seat in between us), it was a pleasant short flight on Jetstar.