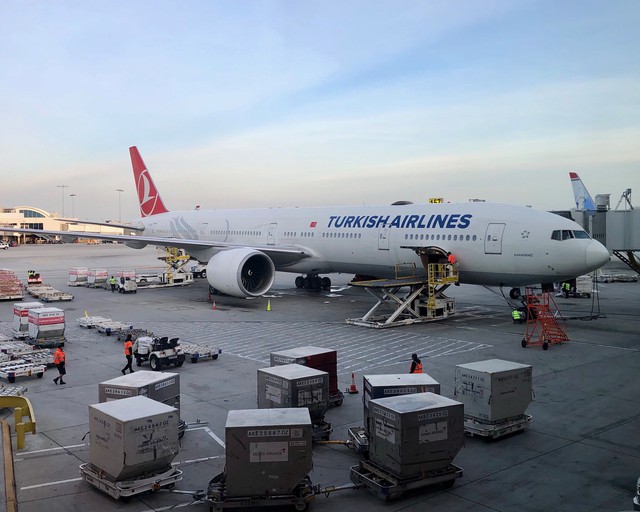 #16 out of 74 Airlines A minimum of 10 flight-reports within the past two years is required to appear in the rankings. 685 reviews

This series will be revealed as we go since it was a complex routing that took me ~24,000 miles and was assembled during the trip.

The first part of this routing was a 2-week trip to Veneto. There are no shortage of options into northern Italy from LAX, but I opted to take TK since their one-way fares were very competitive. I prefer to fly into VCE, but the IST-VCE flight times are incompatible with the arrival times of the TATL flights from the west coast so I had to settle for a LAX-IST-MXP routing and settle for a 3 hour car ride from Milan.

This FR will be one of the shorter ones since there are some missing meal pictures and I slept most of this flight.

I was late leaving work on Friday, so the drive to LAX on a Friday afternoon was a long and arduous task leaving me little time at TBIT. I did check-in as quick as I could and joined the long lines for security. I only had ~15 minutes before boarding was scheduled to start, so I just briefly popped into the *A Lounge for a quick bite to eat. 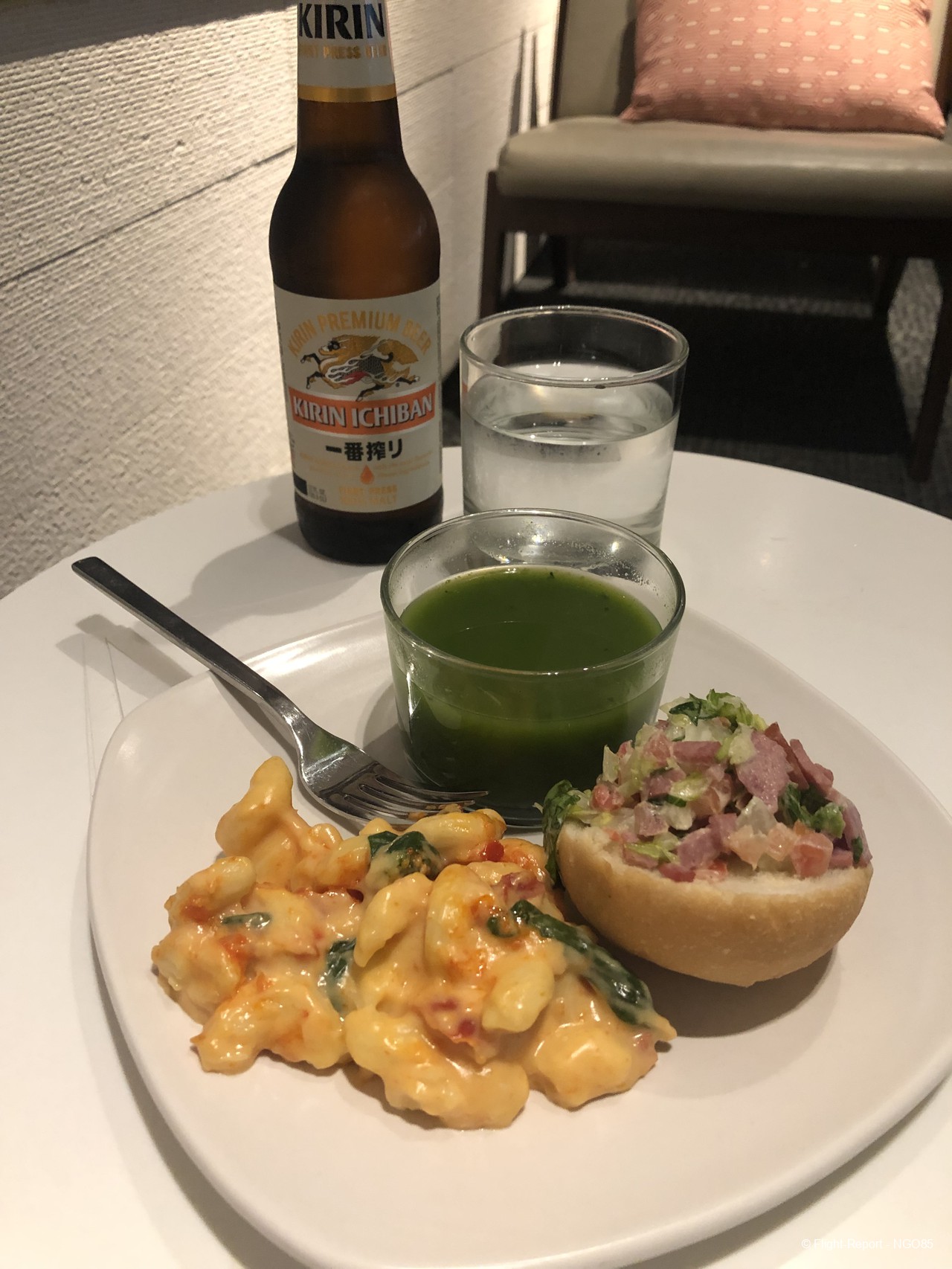 As the boarding announcement was made in the lounge, I finished up my food and headed to Gate 157. Our B77W preparing to head back to IST. RIP the DU B787 tail poking up at the gate next to ours that was operating to LGW. From all of the luggage containers in the foreground, an OZ B772 operating OZ 203 is likely to take our gate next. 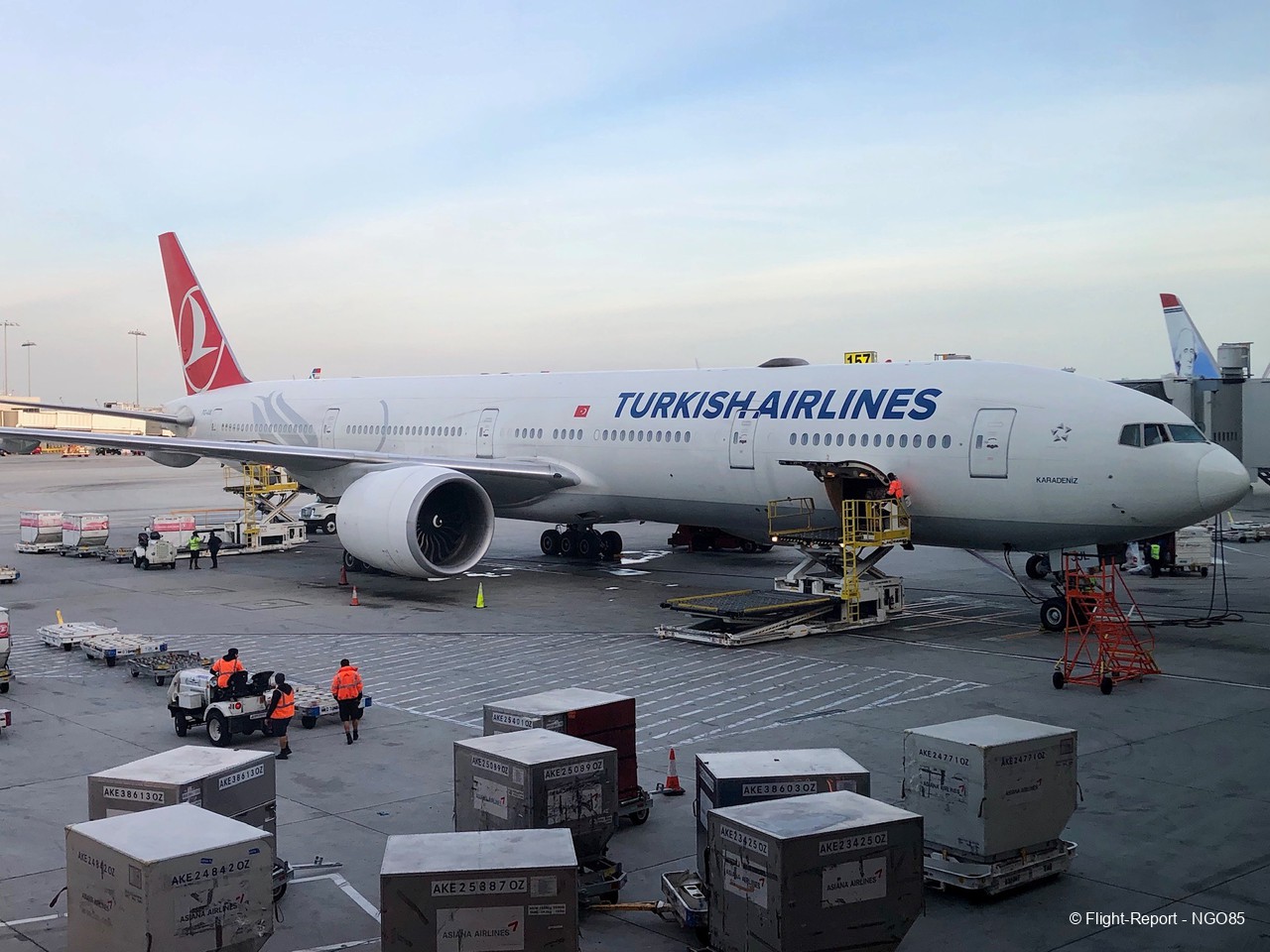 My boarding pass for this flight, or at least what is left of it. 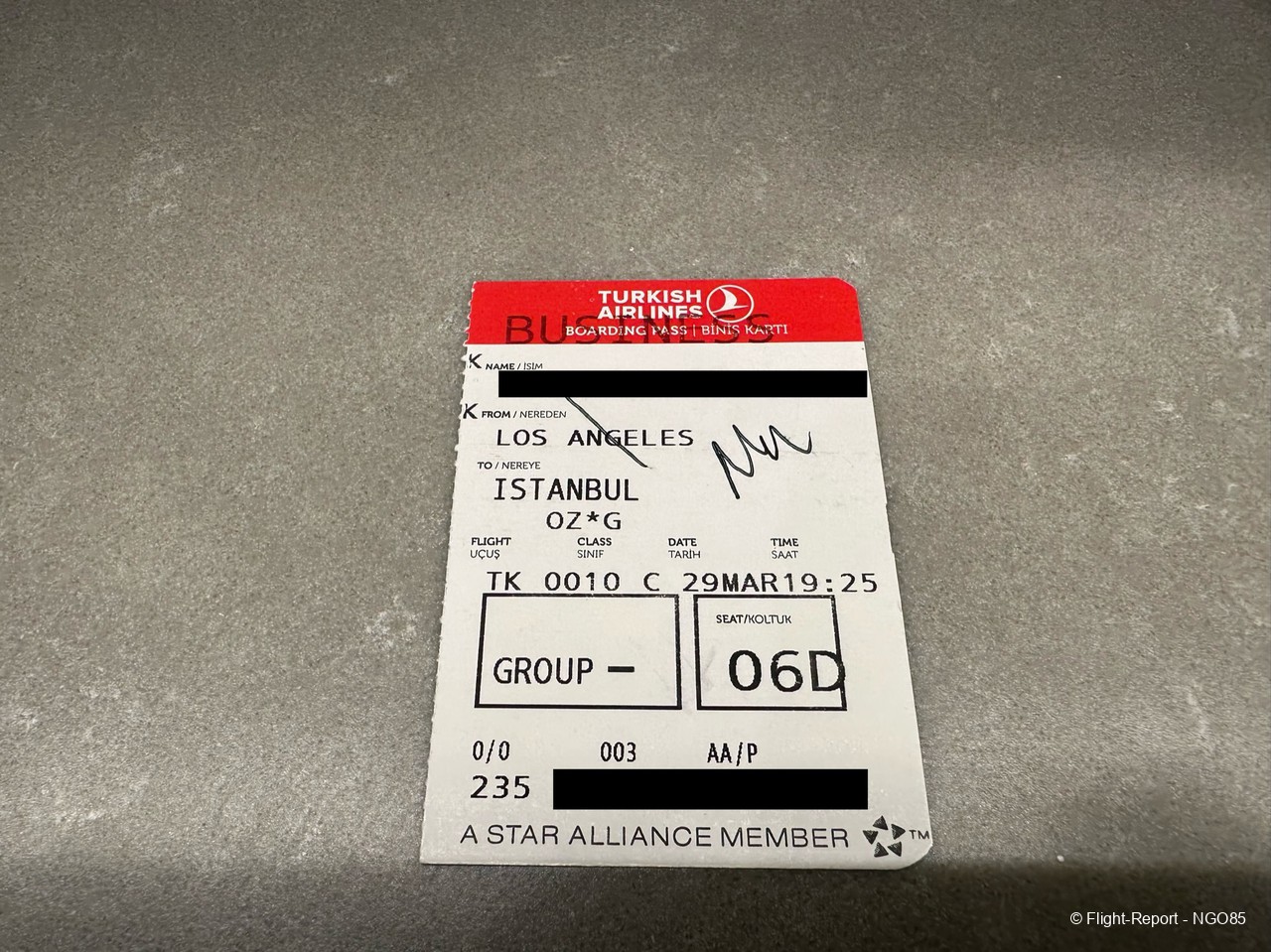 Boarding started on time and I boarded with the end of the business class queue. TK crews can be hit or miss and this crew was not very warm, but they did at least have good service and were attentive. I was shown into the direction of my seat.

My seat for this flight in the 2nd row of the mini J cabin. I booked this flight only 4 days before departure so the only remaining seats were 6D and 7E. I didn't want to be in the middle of the 3 seats so I chose this aisle seat in the rear cabin. My grumpy seatmate in the middle seat is already there and was not too pleased about my photography so there will be a minimal seat tour. Pre-placed on the seat was just a pillow. I actually like that they don't distribute bedding until after meal service when they do turndown service for you. It's usually awkward finding space to put the bedding and with this cramped seat, there is really no where to store it during take-off/meals. 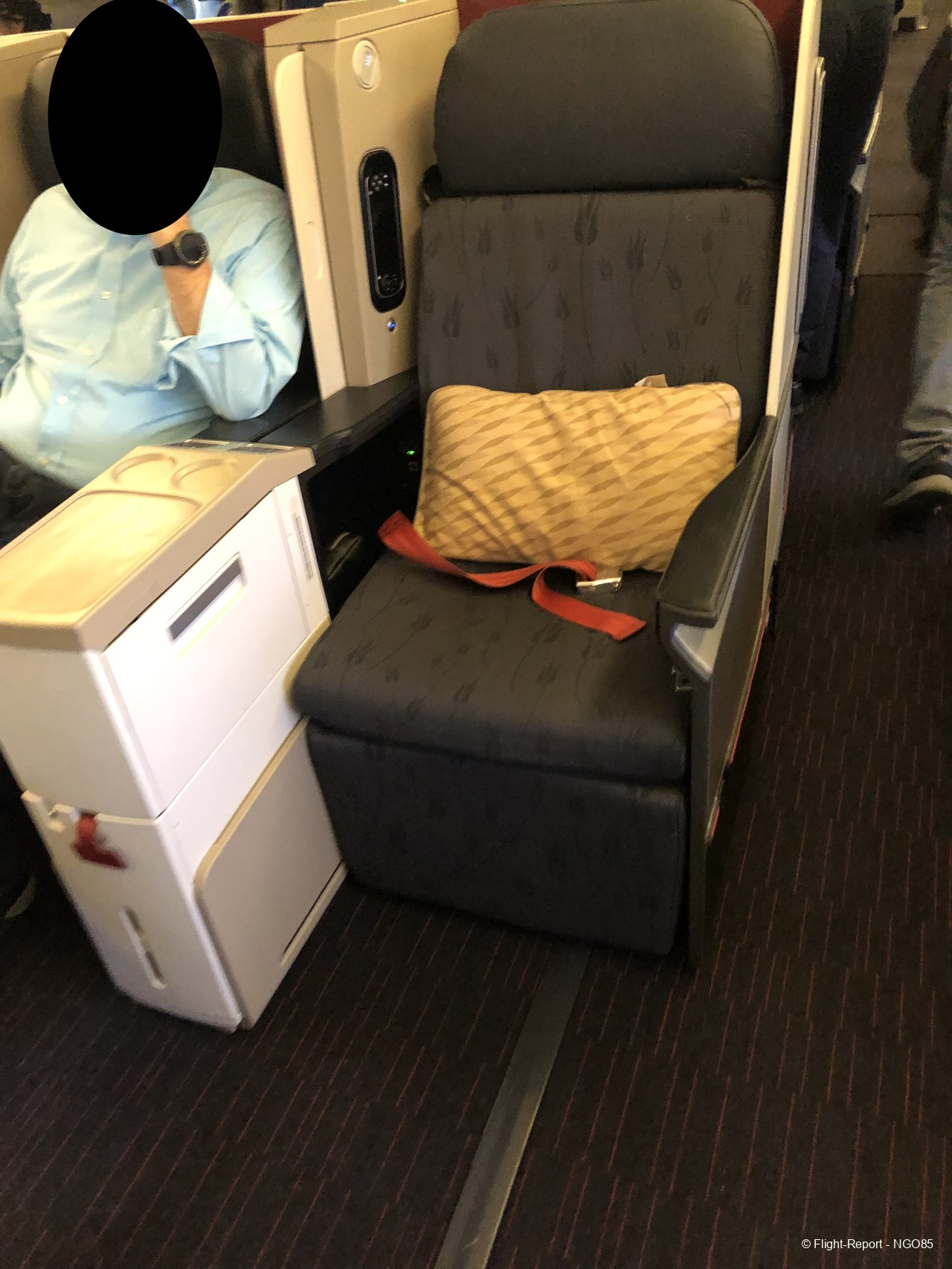 Since Mr. Grumpy was giving me the stink eye, just one quick photo of the cabin. The cabin is very open and exposed, but it is at least airy feeling since not as dense with walled up seats like in newer cabins. The IFE is big (kind of needs to be since it is ~5 feet away) and responsive, they also offer WiFi onboard, but I didn't use their complimentary 10MB. The ottoman has a storage compartment for your personal items, but is really not that convenient since you can't reach it from your seat. Pre-placed on the ottoman was slippers inside of a shoe bag, which are always a nice amenity on this half-Asian carrier. 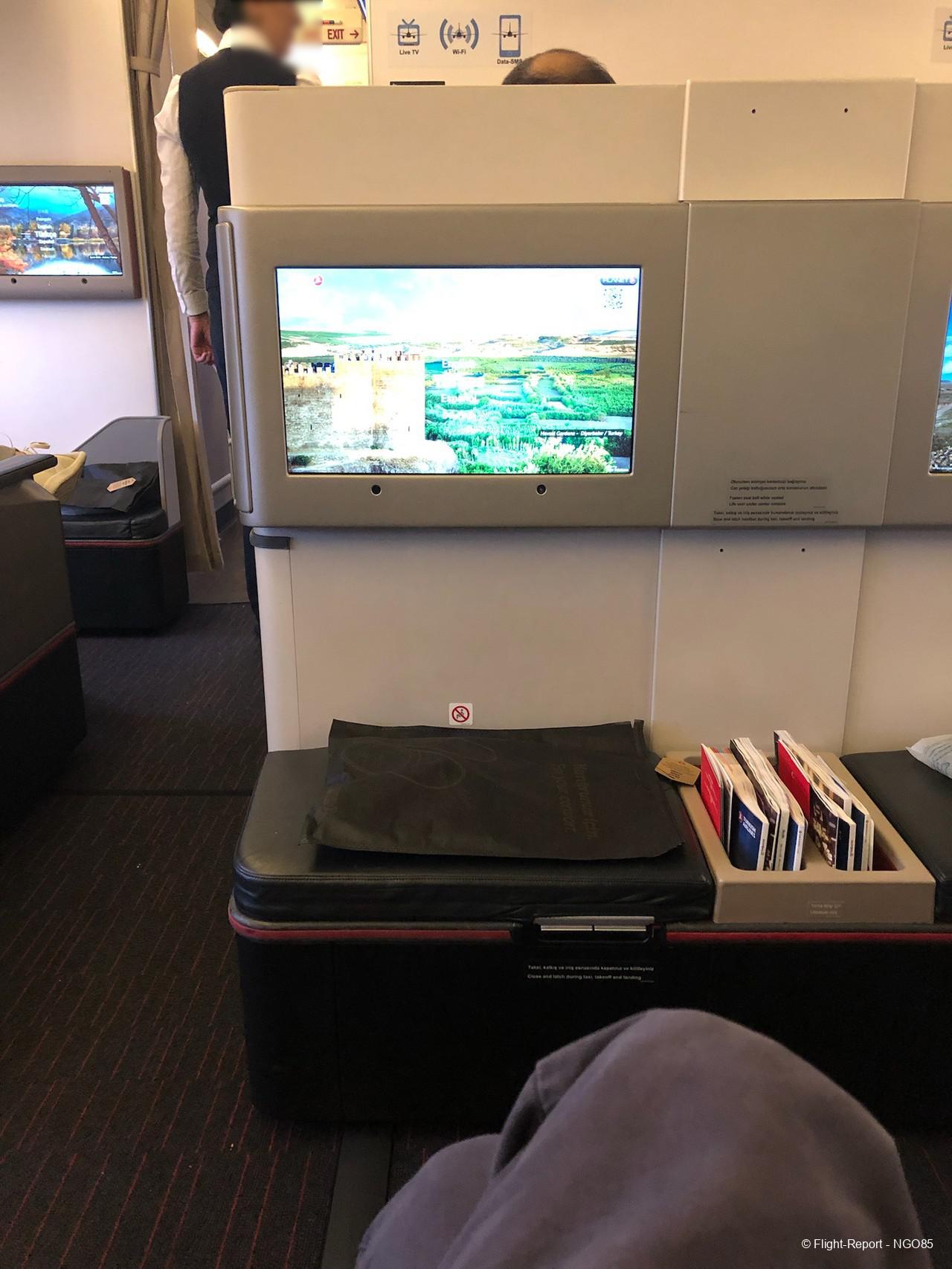 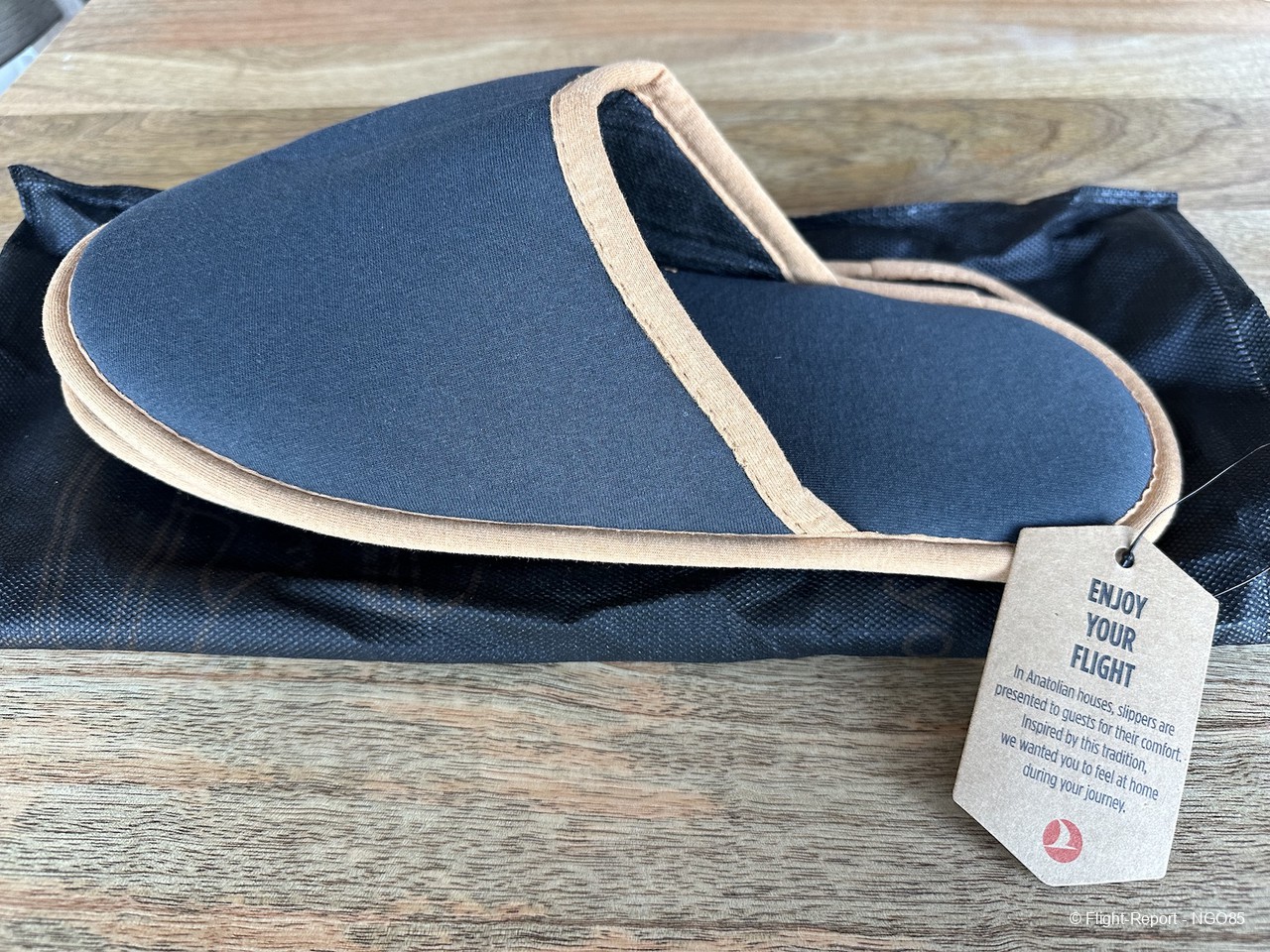 The crew came through and offered PDBs from a tray. No alcohol, only the standard TK juices and water. I took a raspberry juice and Mr. Grumpy took a lemonade. 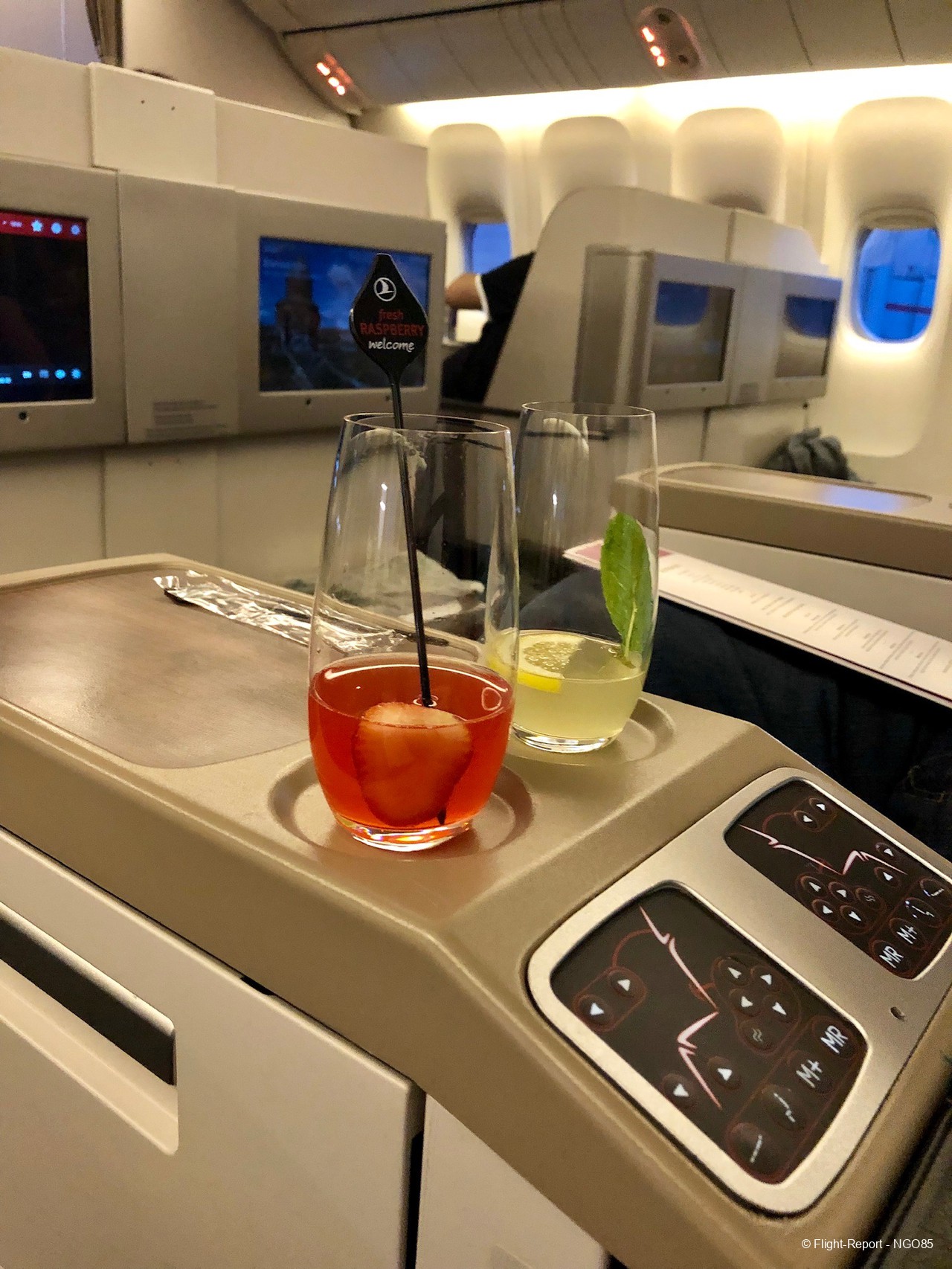 They also handed out menus with pens and amenity kits as boarding was completing. 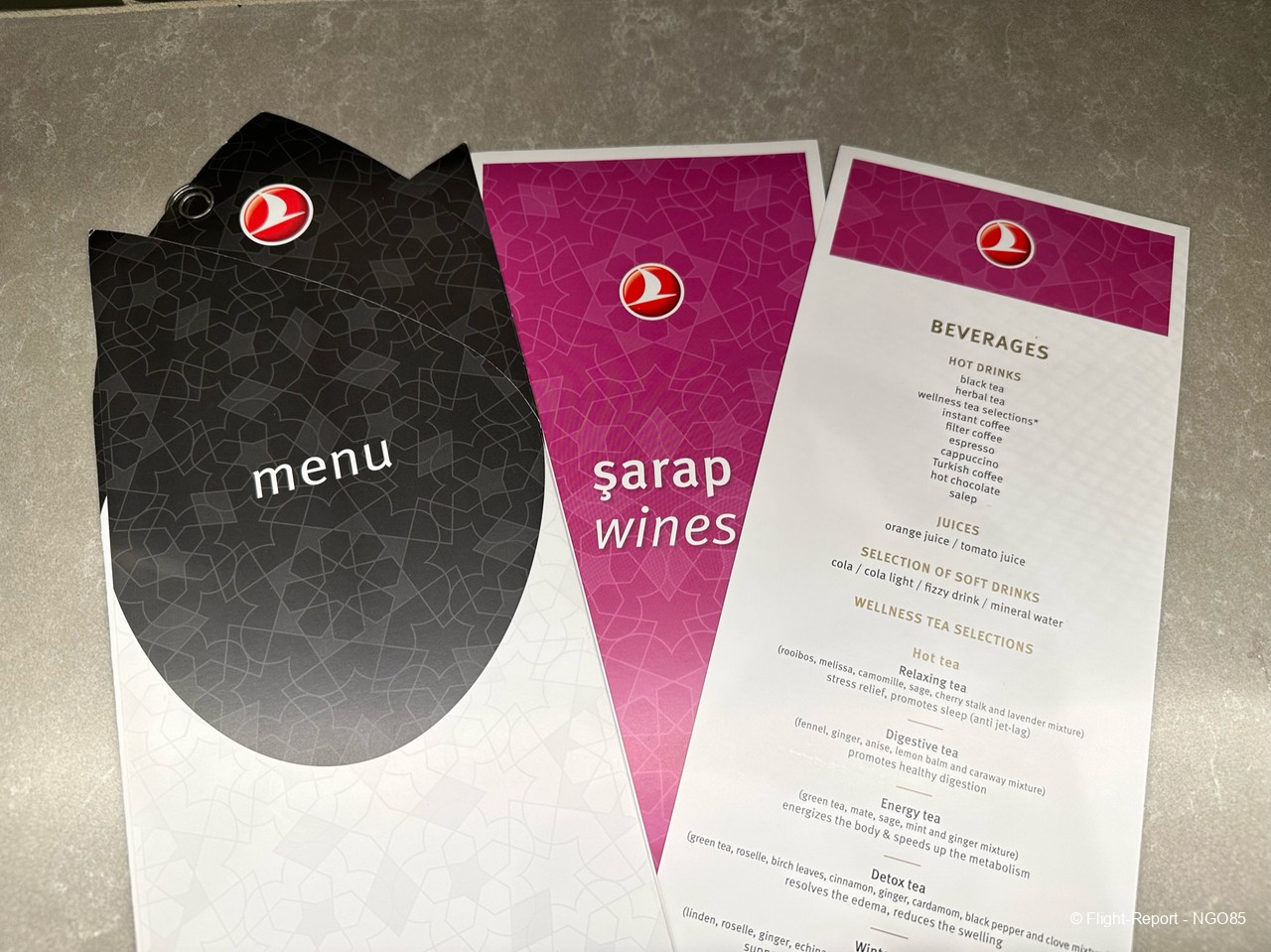 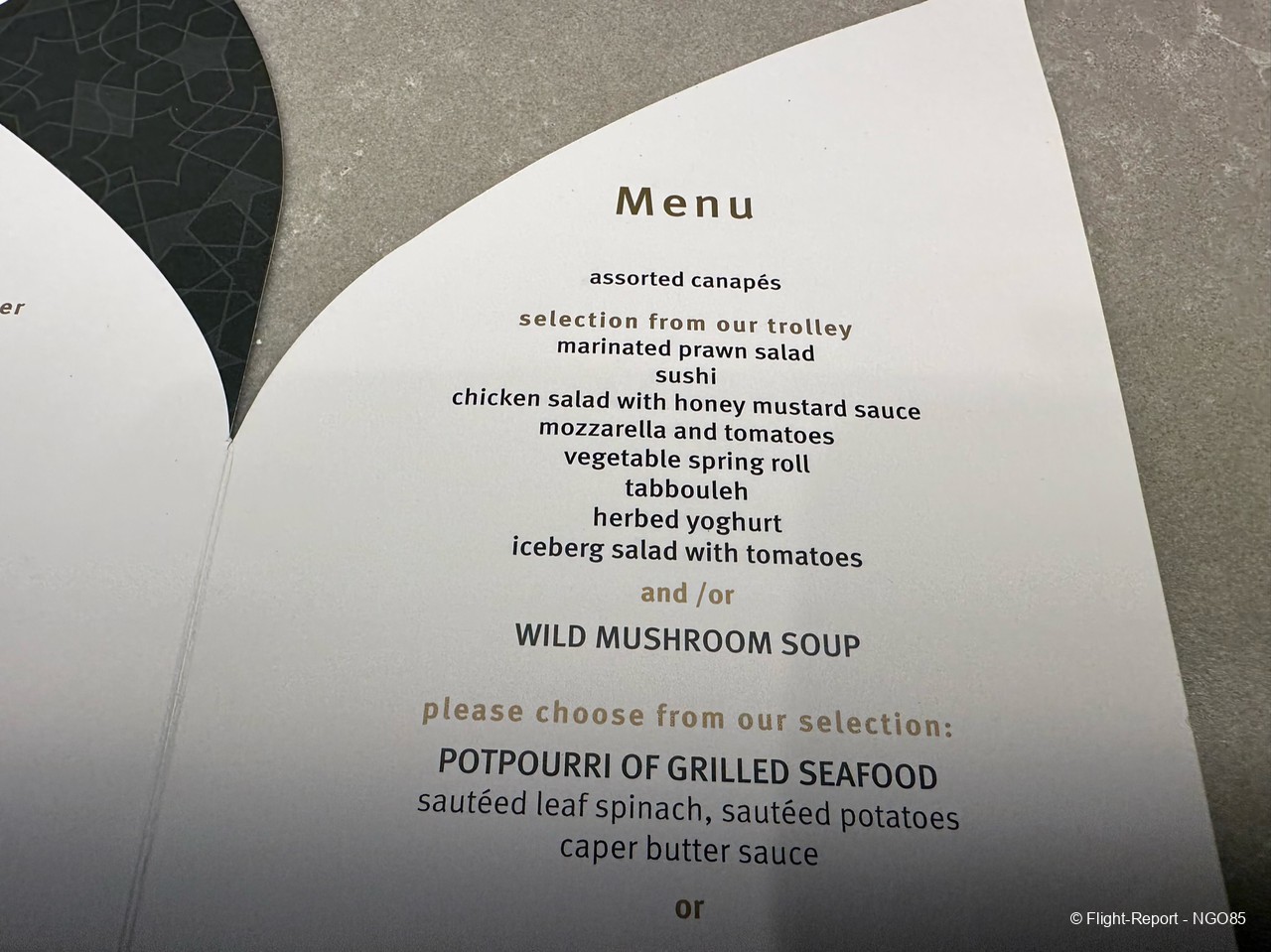 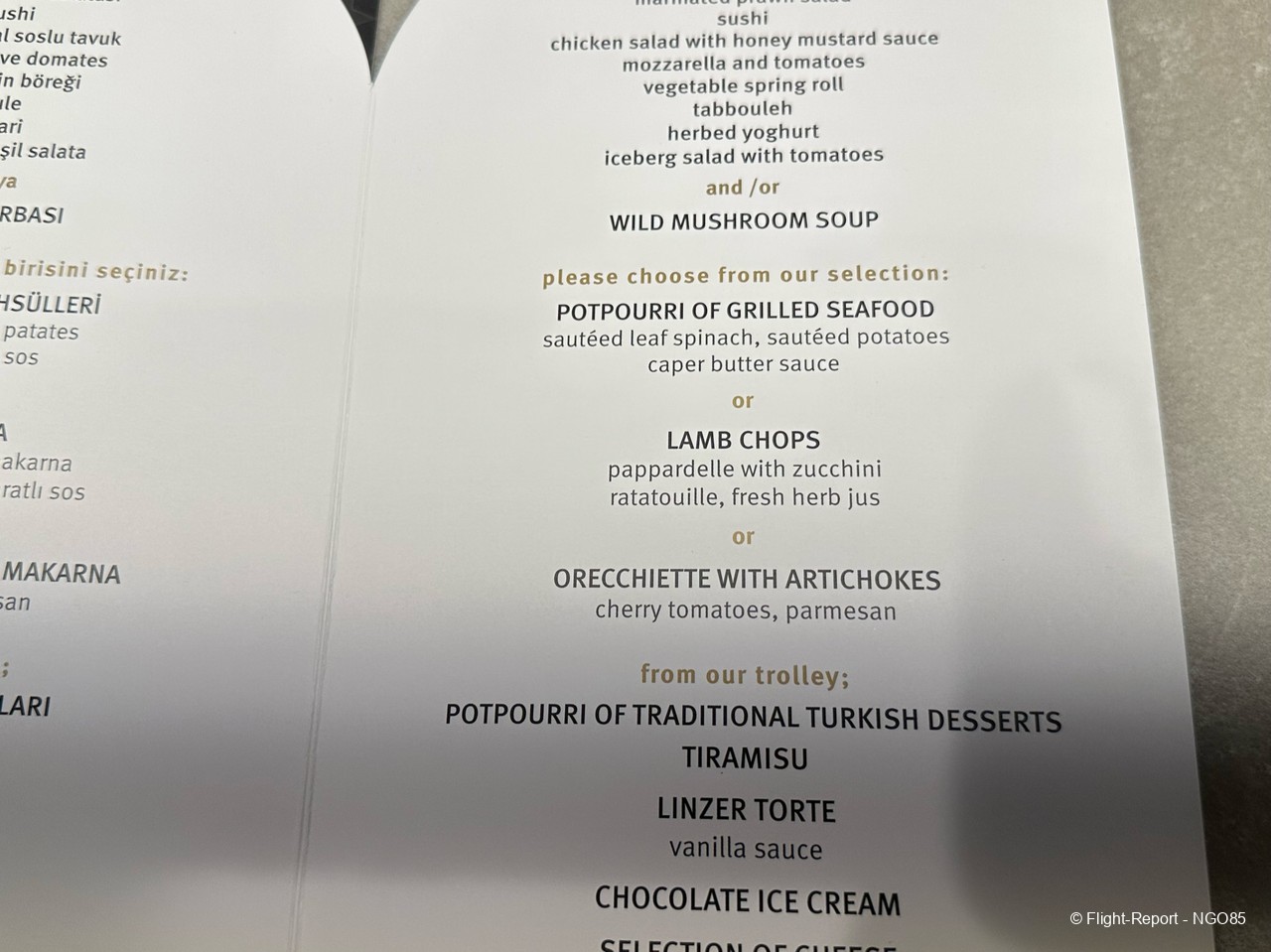 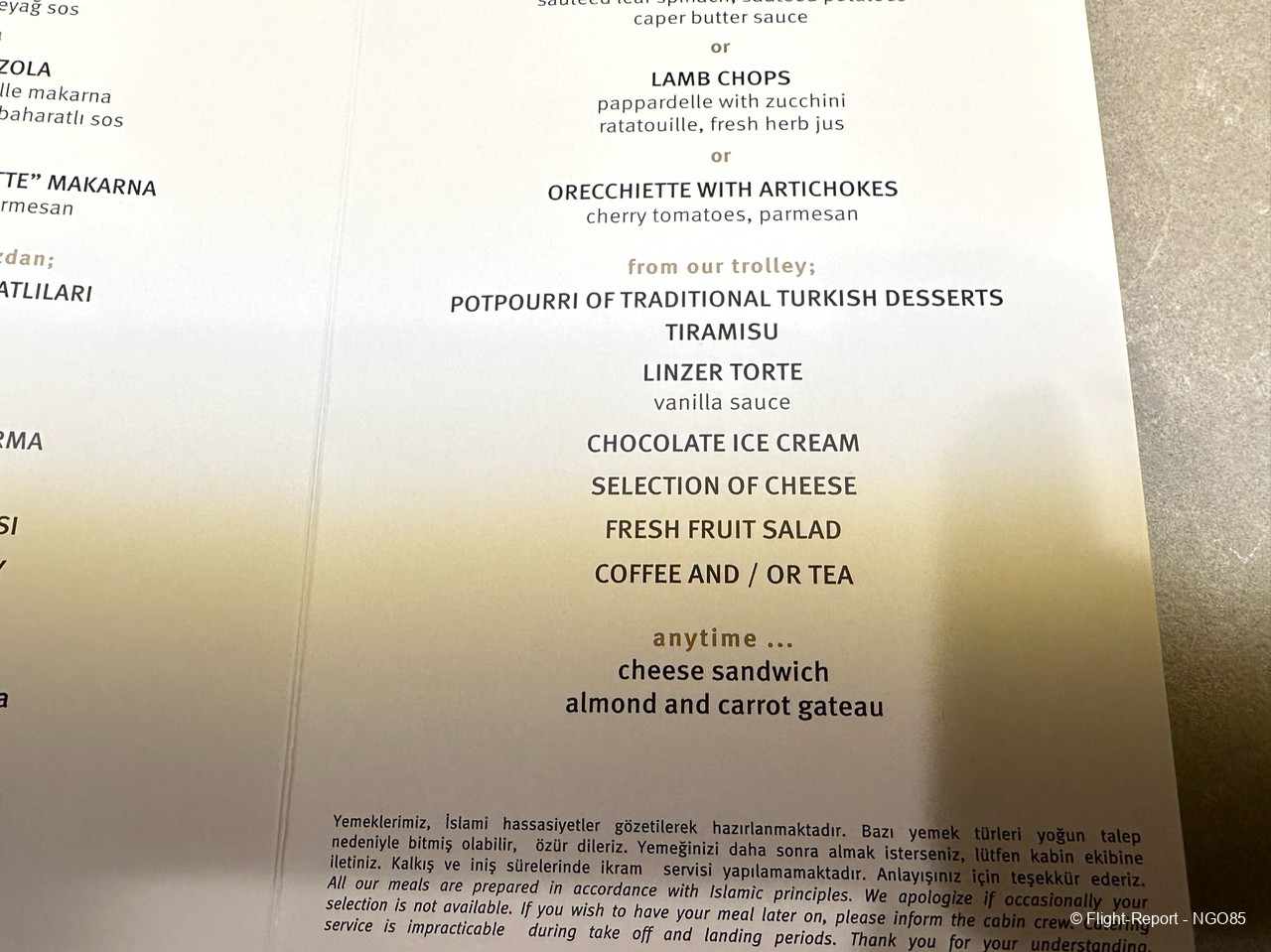 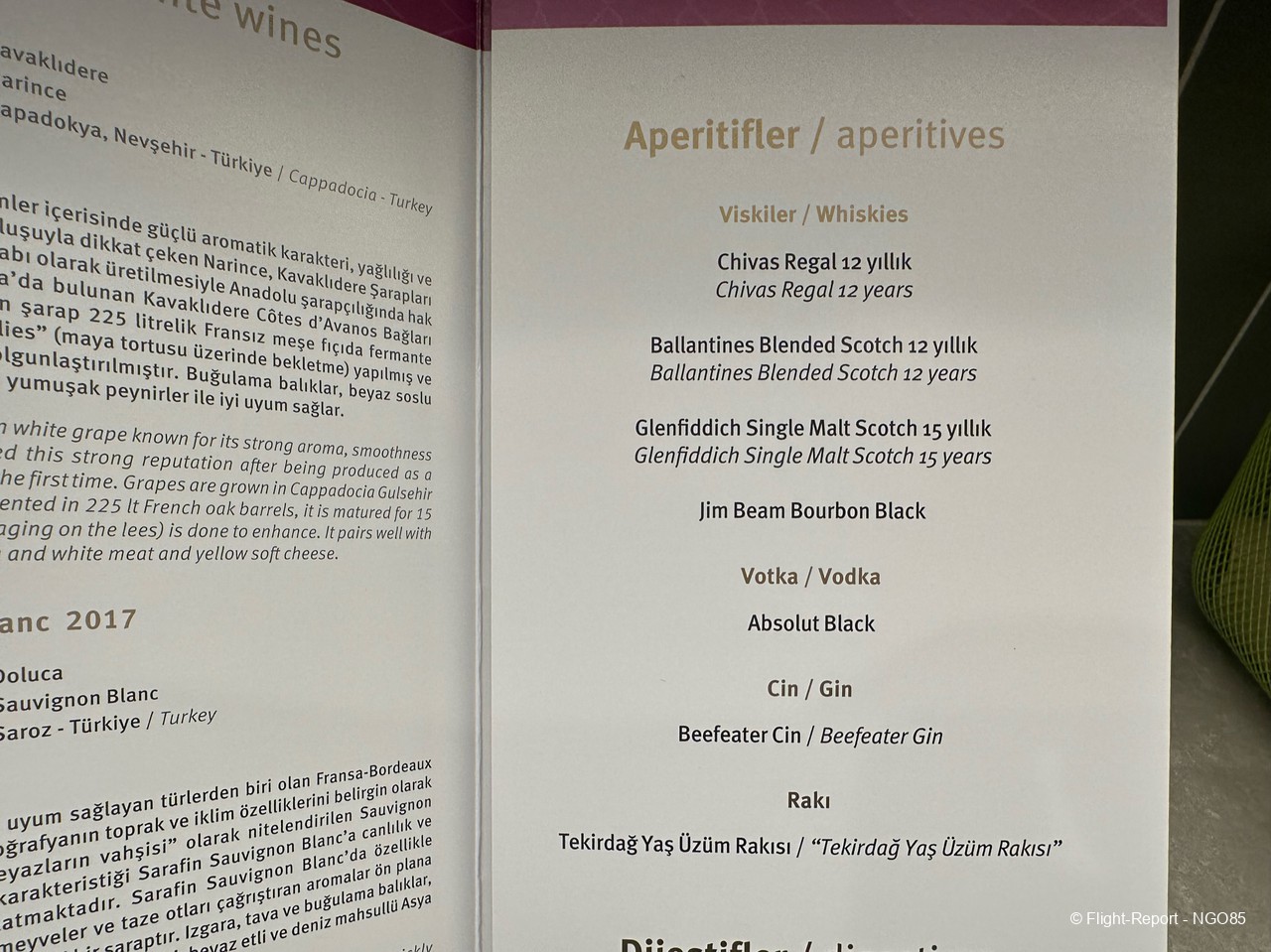 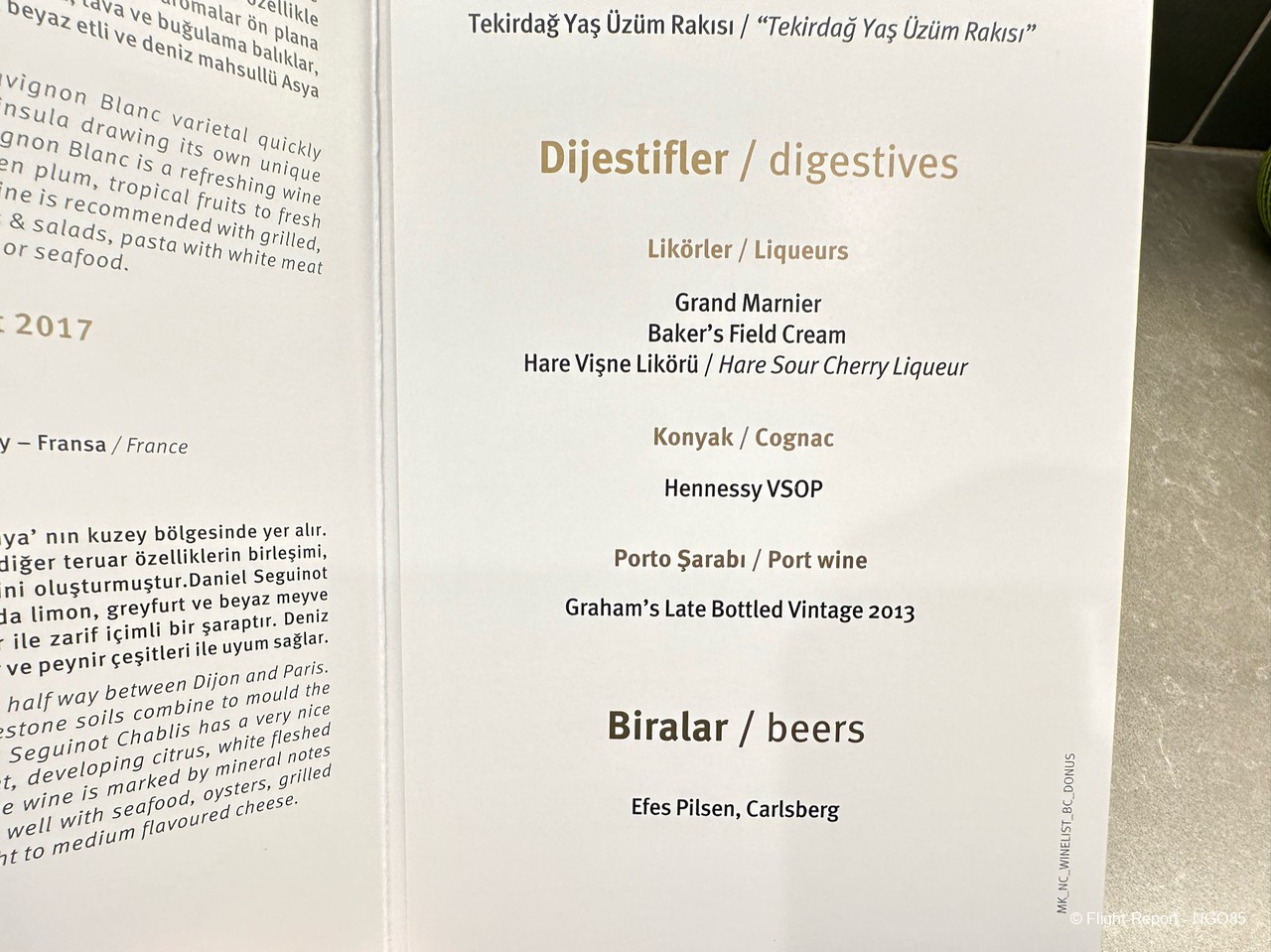 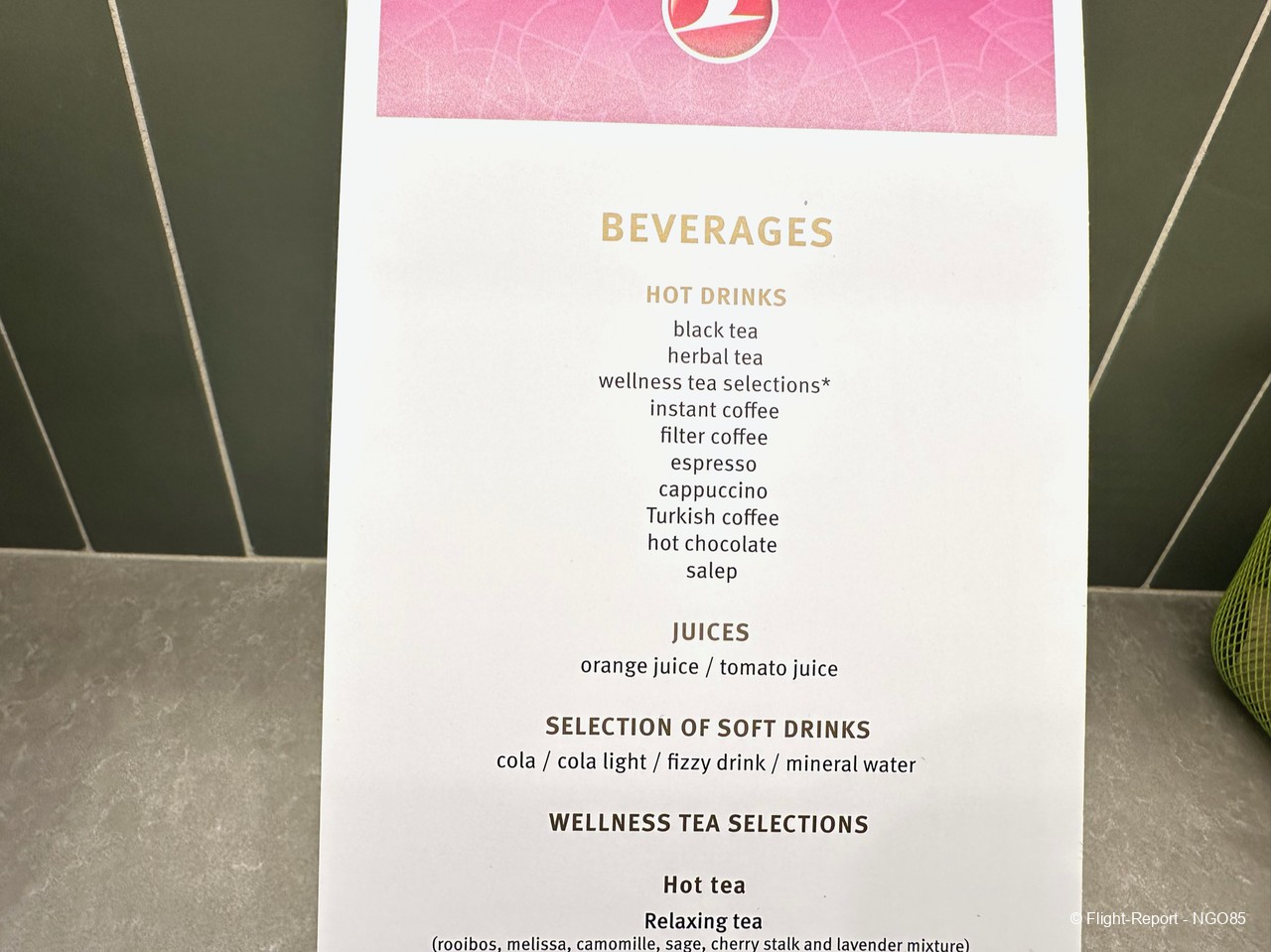 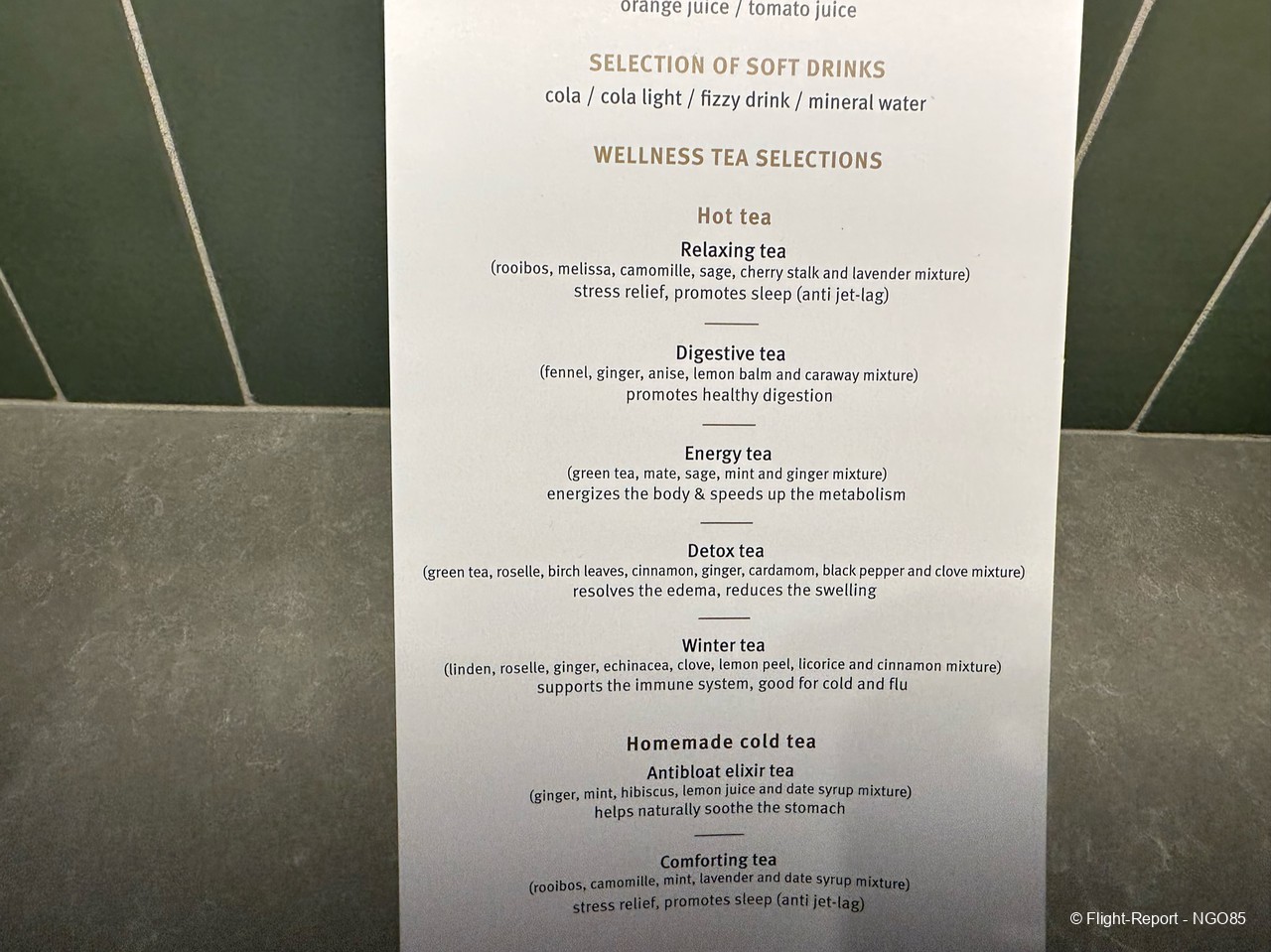 They then came by to collect the breakfast menus. 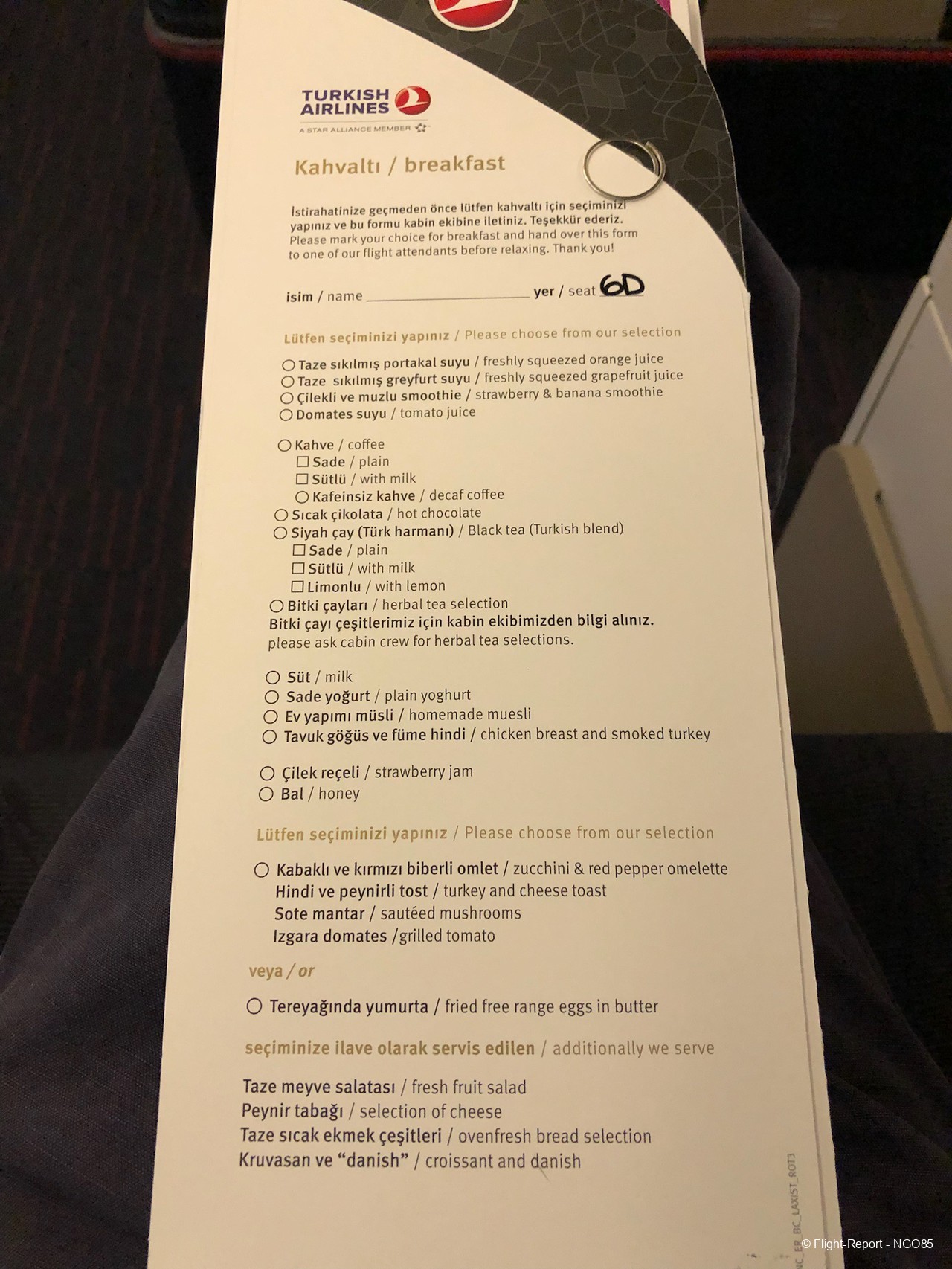 The amenity kit from Christian Lacroix, which contains basic products (lip balm and hand cream), but a lot of other items that are less common like a hair brush and shoe horn. 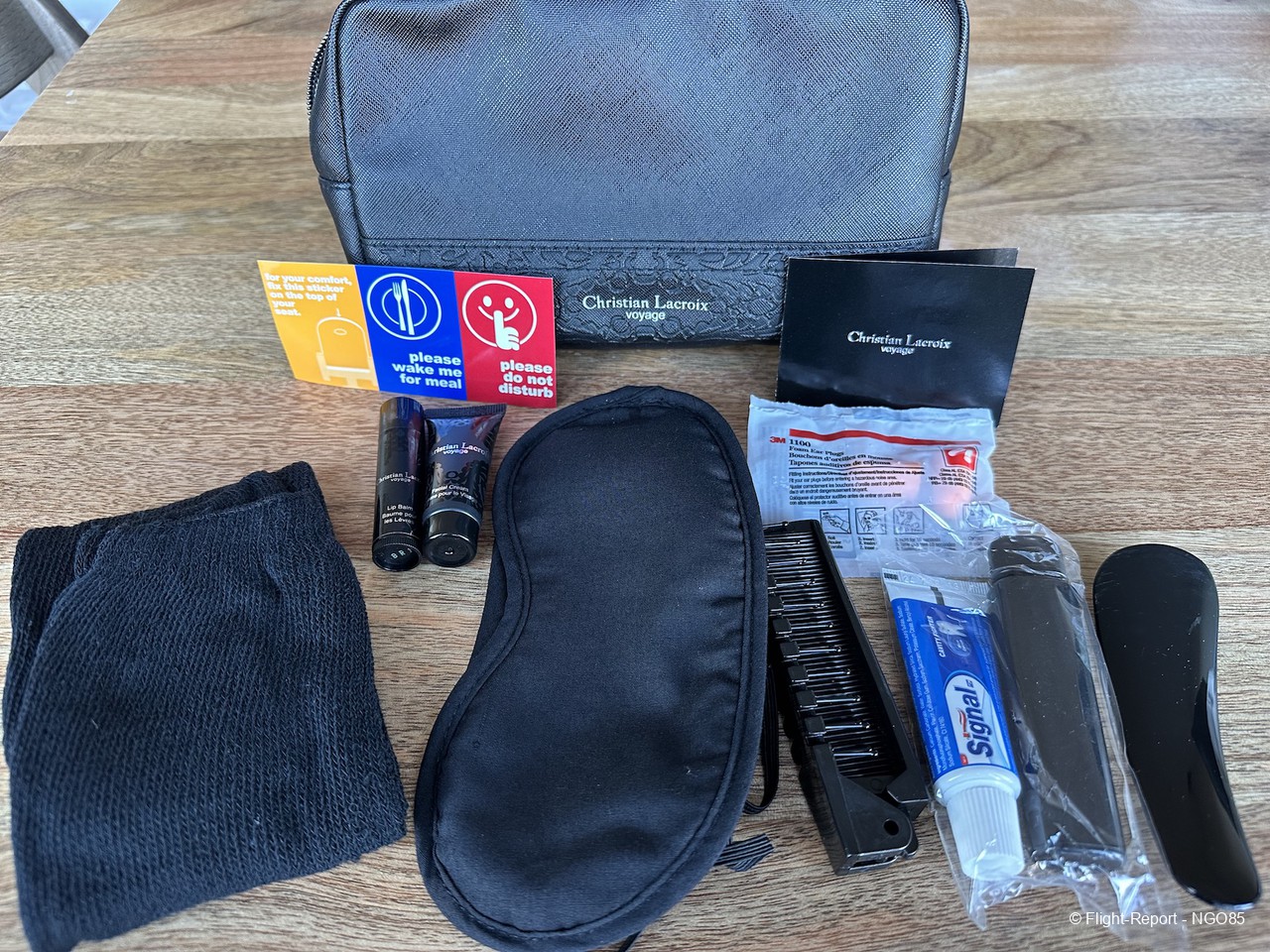 They predicted a flight time of 12:21 today, which was not too far off the actual. We left the gate slightly late and had the long taxi around LAX to do the customary departure from Runway 24L. 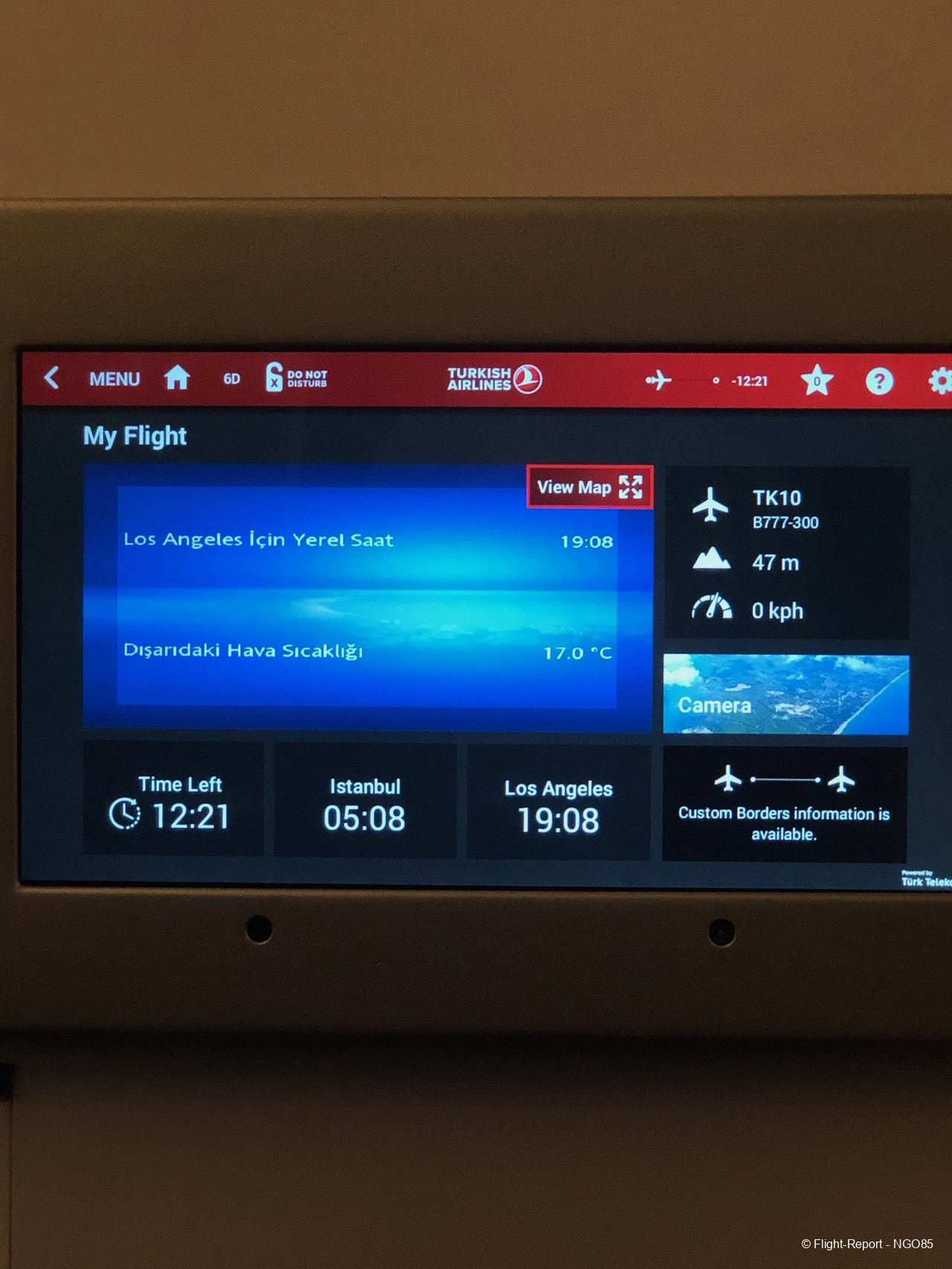 After leveling off, the mood lighting was turned on and we went straight into dinner service. Linens were laid and the place settings were done. I apologize for the photos, but the blue mood lighting makes photography very challenging and I was trying not to draw the attention of my seat mate to avoid any other confrontation. 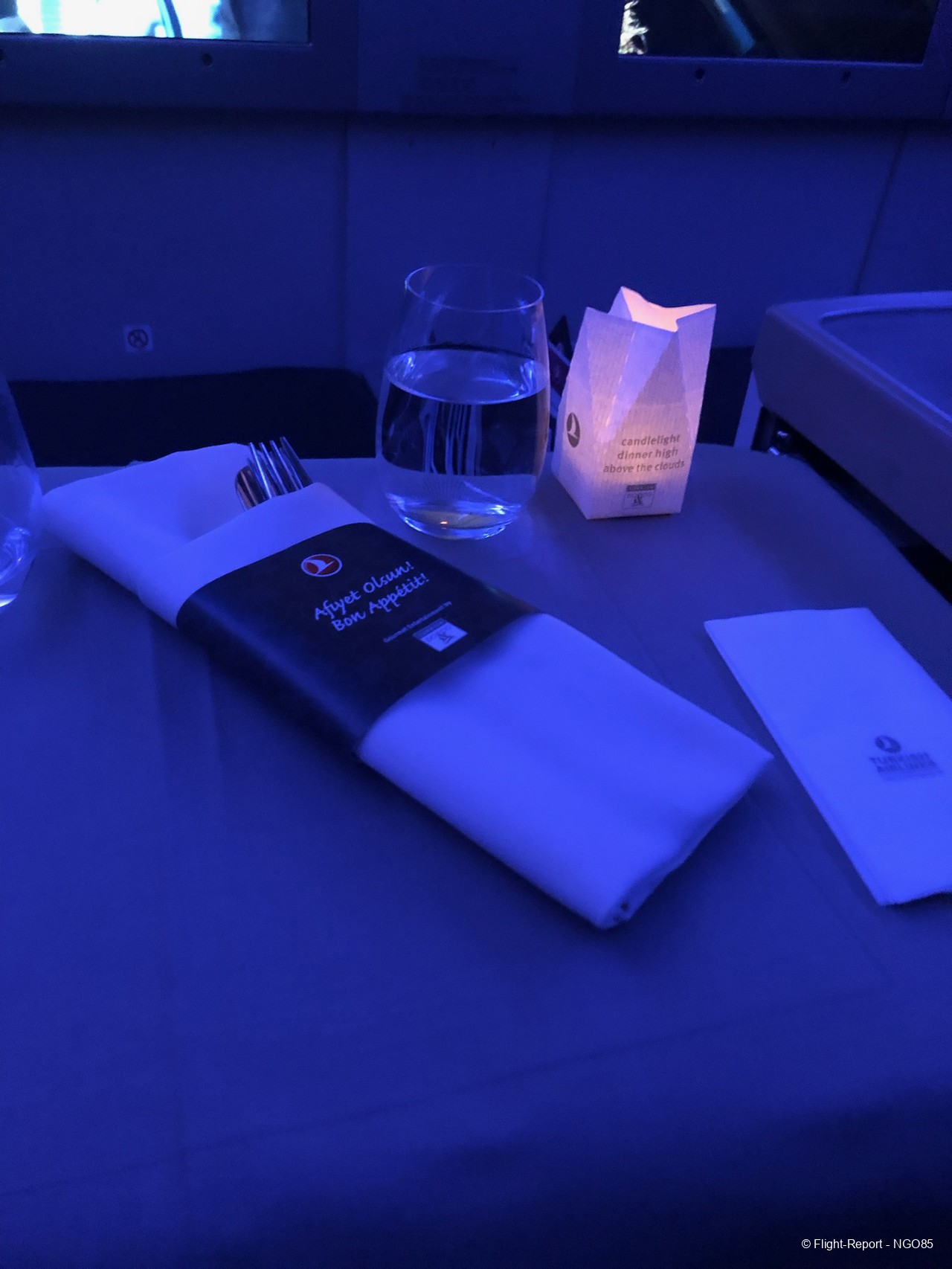 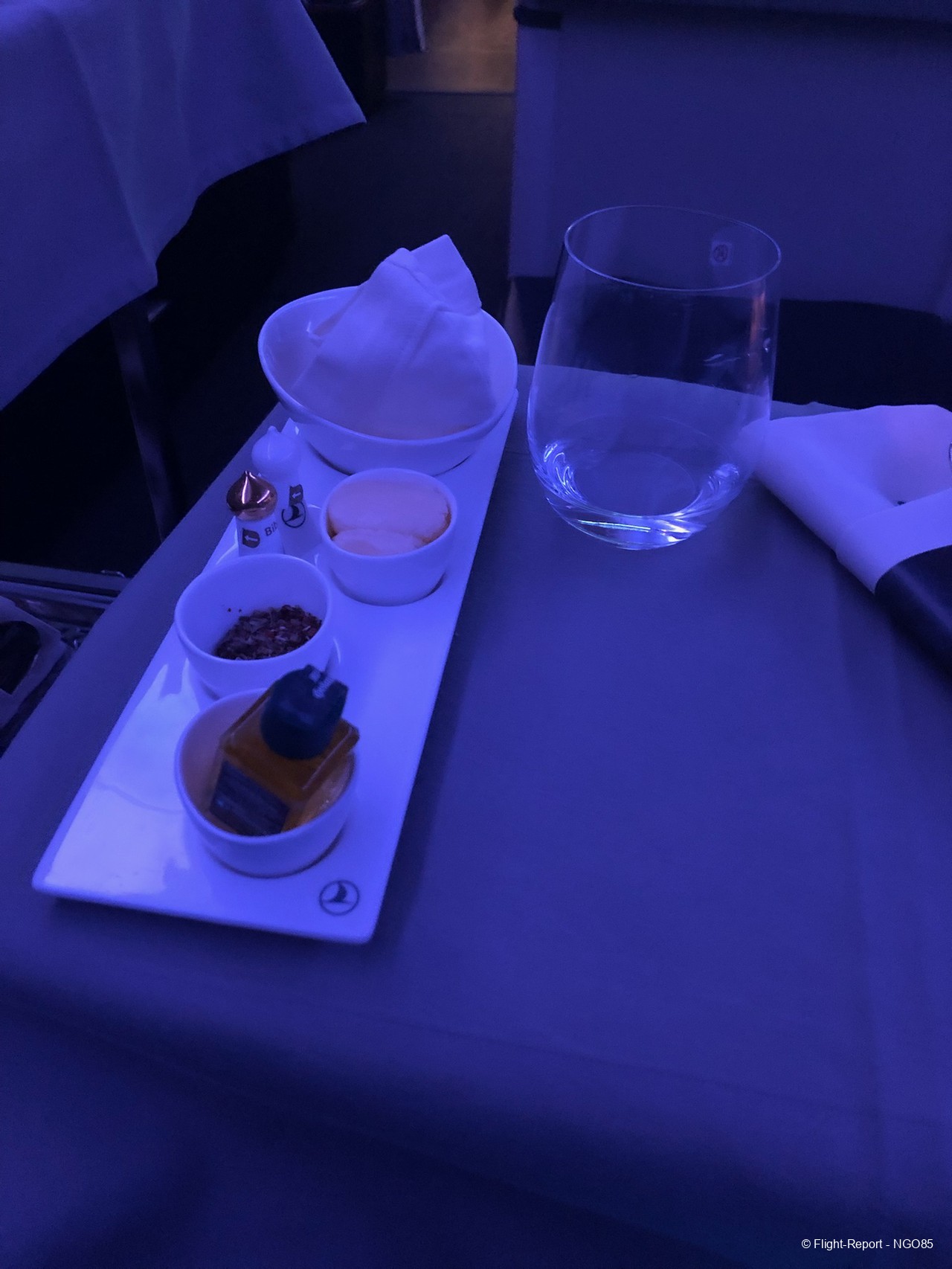 Appetizers were done by cart "family style" where you can just pick what you want. For some reason, I cannot find the photos of the appetizer or the dessert. For the appetizers, I remember that I took some prawn salad, spring roll, and tabbouleh. I find their offering to be quite eclectic versus the standard meze you see on other carriers from a little bit further south. Nothing really stood out from the selection I tried.

For the main, I was told that that the only option left was the seafood potpourri, which was the only thing I didn't want to eat on the menu. Apparently all of Rows 5 and 6 were forced to eat this entree. I was not very impressed with the dish and did not find the cook on the fish to be very good. 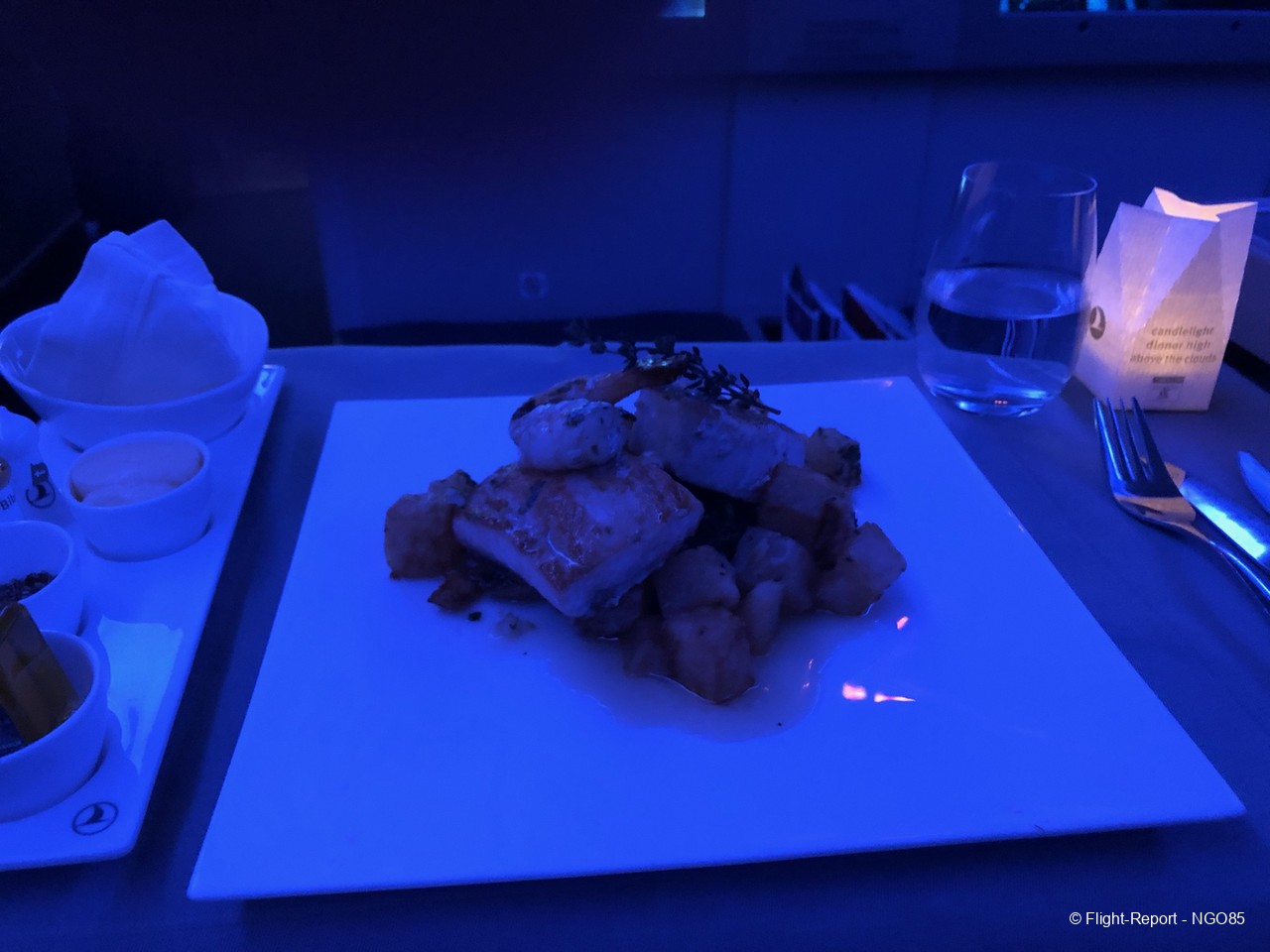 After the main was cleared, the dessert service was again done by cart along with coffee/tea. I had the Linzer torte, which was quite good. That was pretty much the highlight of the meal service unfortunately.

As the trash was cleared, the FA offered to perform turn down service so I left to go use the bathroom and freshen up for sleep. The lavatory is nicely appointed with fake greens and Molton Brown products. 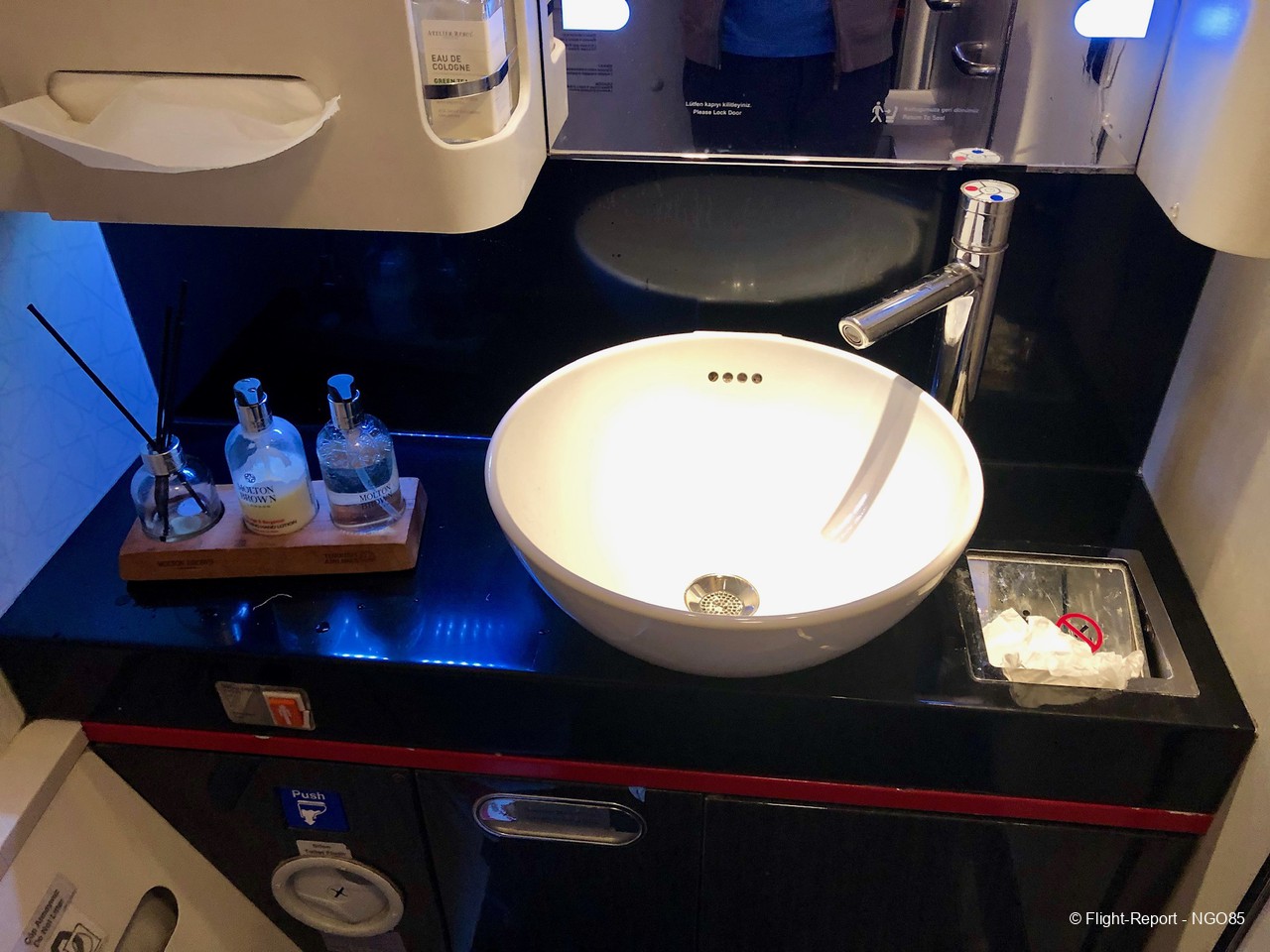 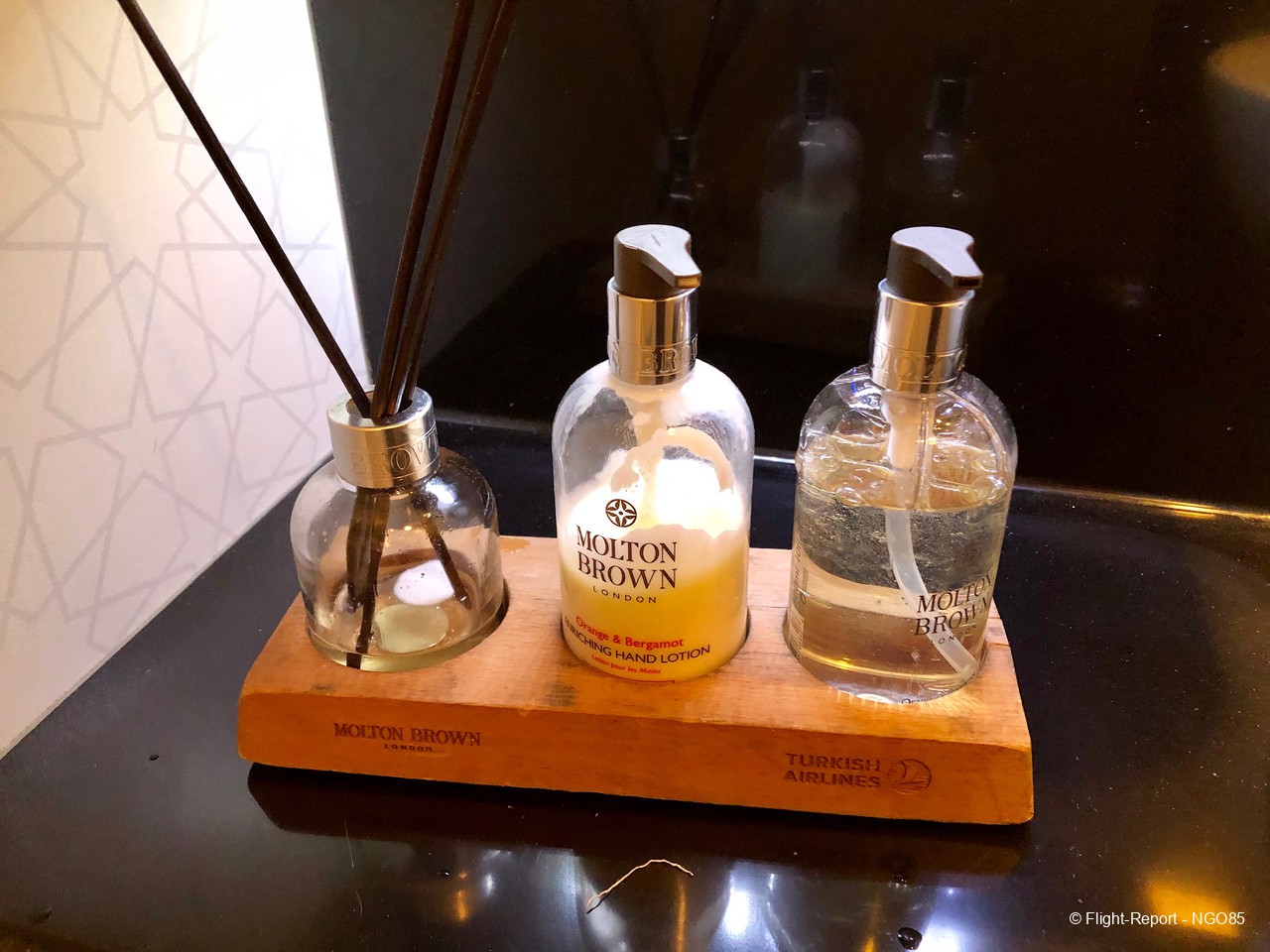 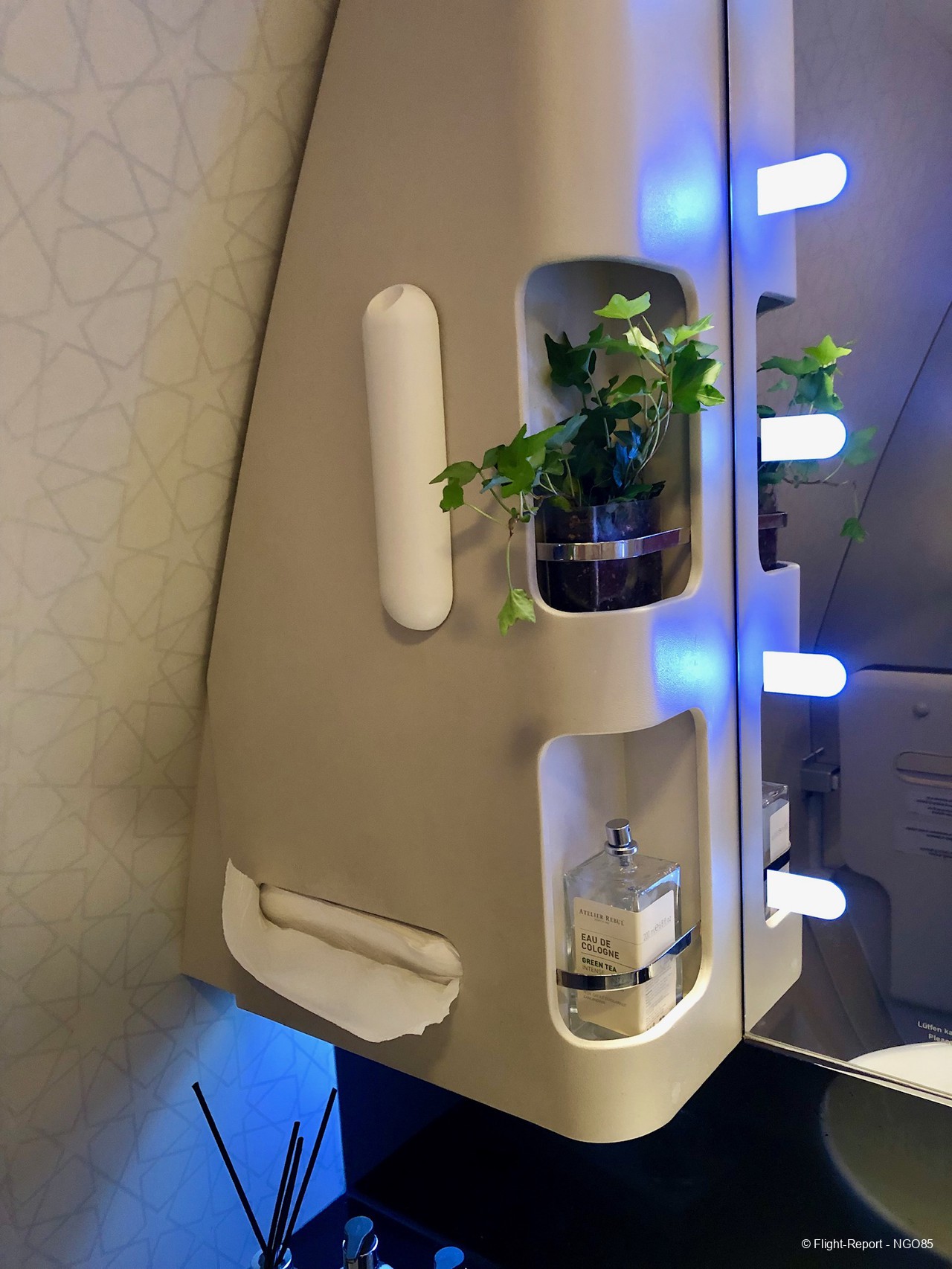 I slept most of the flight so didn't really peruse the IFE too much. The only issue with these cabins is that the screen is so far away that you are forced to use the remote to control everything, which is not very convenient. The content was not very expansive in my opinion, but for a single flight, there is enough to keep you entertained.

About 2 hours prior to arrival into IST, the mood lighting came back on and the meal service was initiated.

Breakfast service is done by tray since it is all pre-ordered, but at least linens are laid and the meal is coursed. The tray contained the cheese, yogurt, fruit and croissant that I requested. To drink, I had a coffee and the strawberry/banana smoothie. 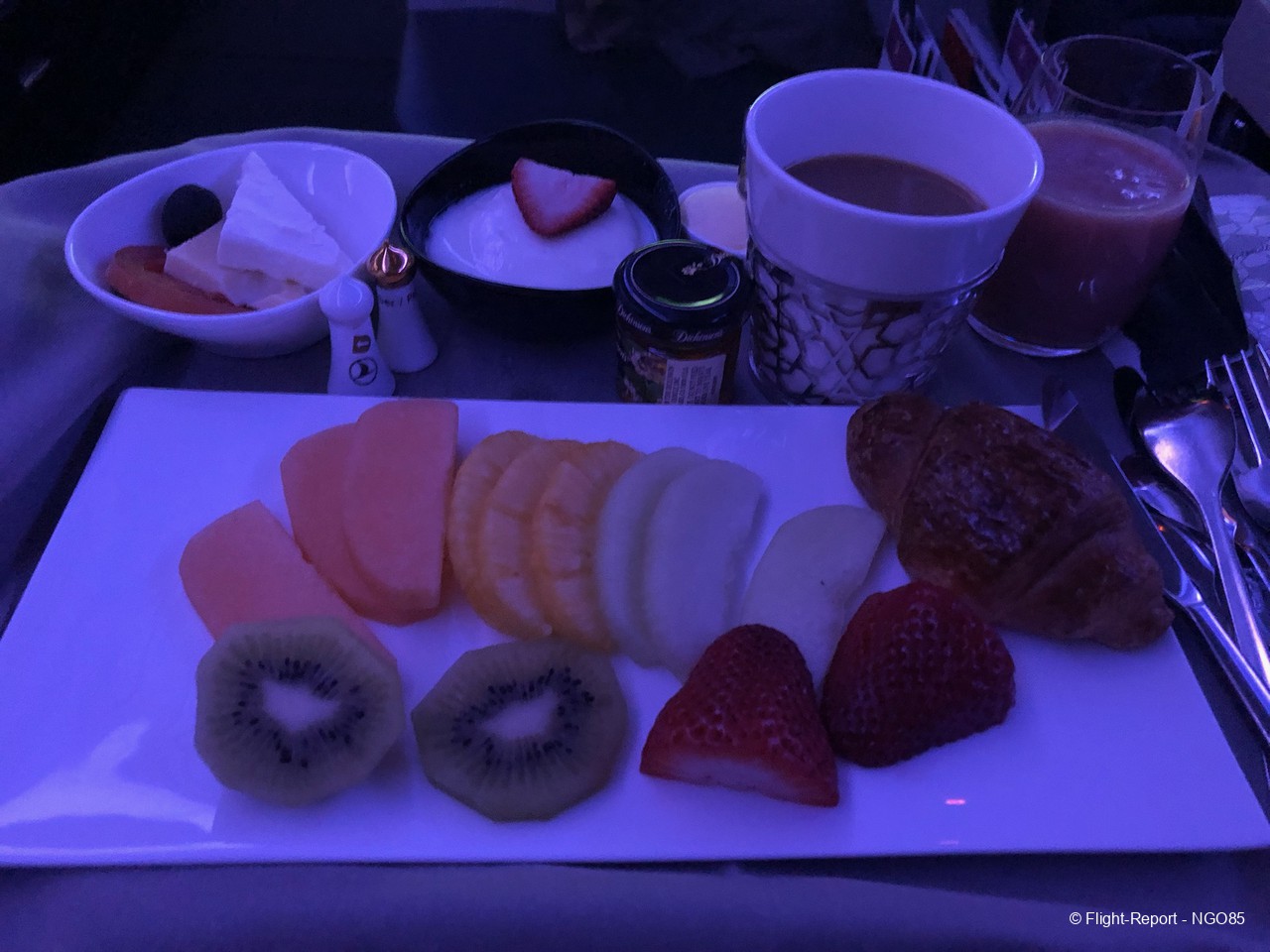 Once I ate my fruit plate, it was removed and I was handed my fried eggs along with a refill of coffee and and an offer of more pastries. 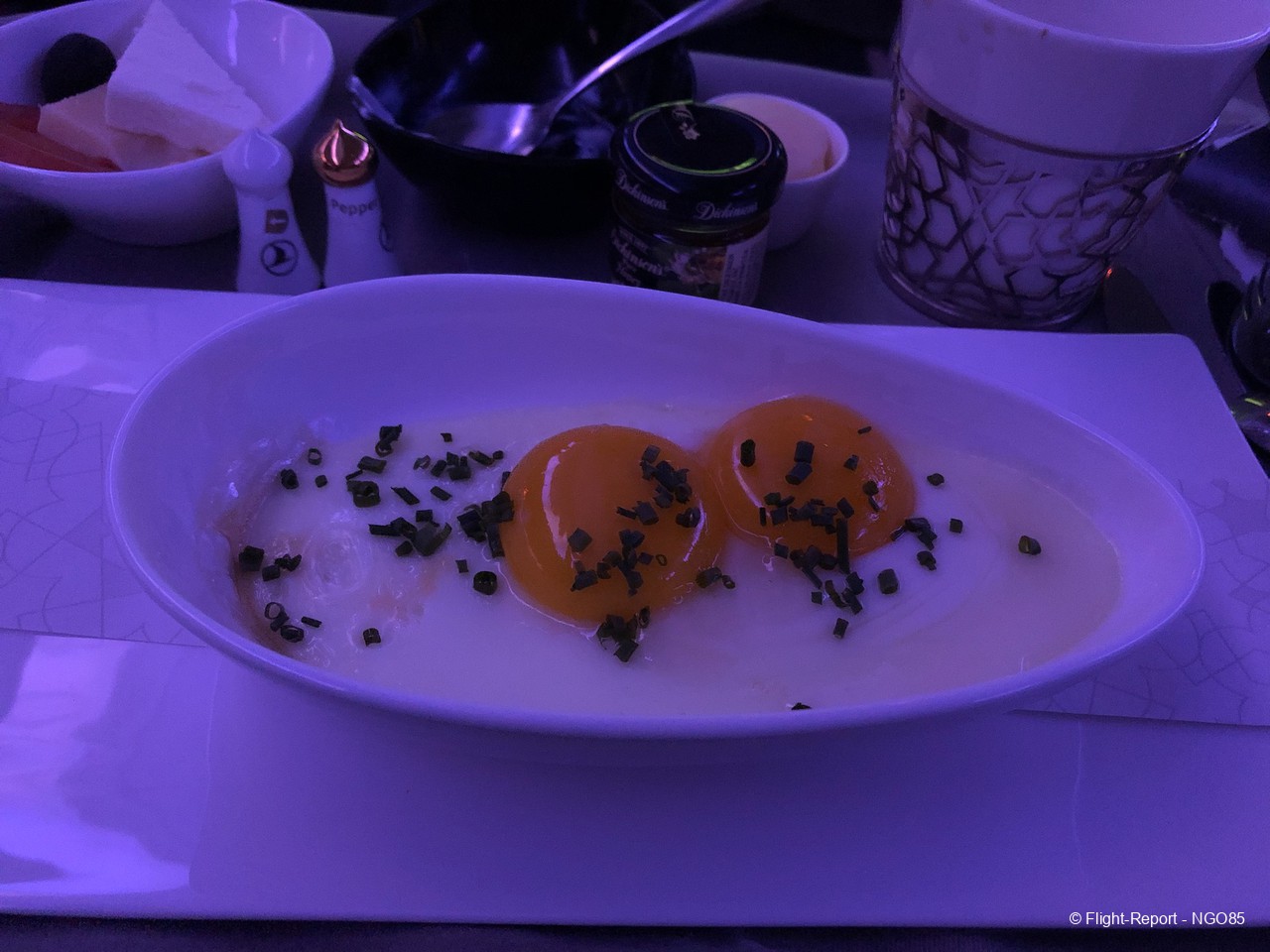 Being in the middle of the cabin, I couldn't tell too much going on during the decent other than what was on the moving map. We landed fairly smoothly and had a long taxi that eventually led us to the remote stands. We deplaned through 2L, but our cabin was held until the front cabin deplaned first.

A last look at the Karadeniz as I got into the paxbus and was zipped back to the terminal on a wild bus ride. 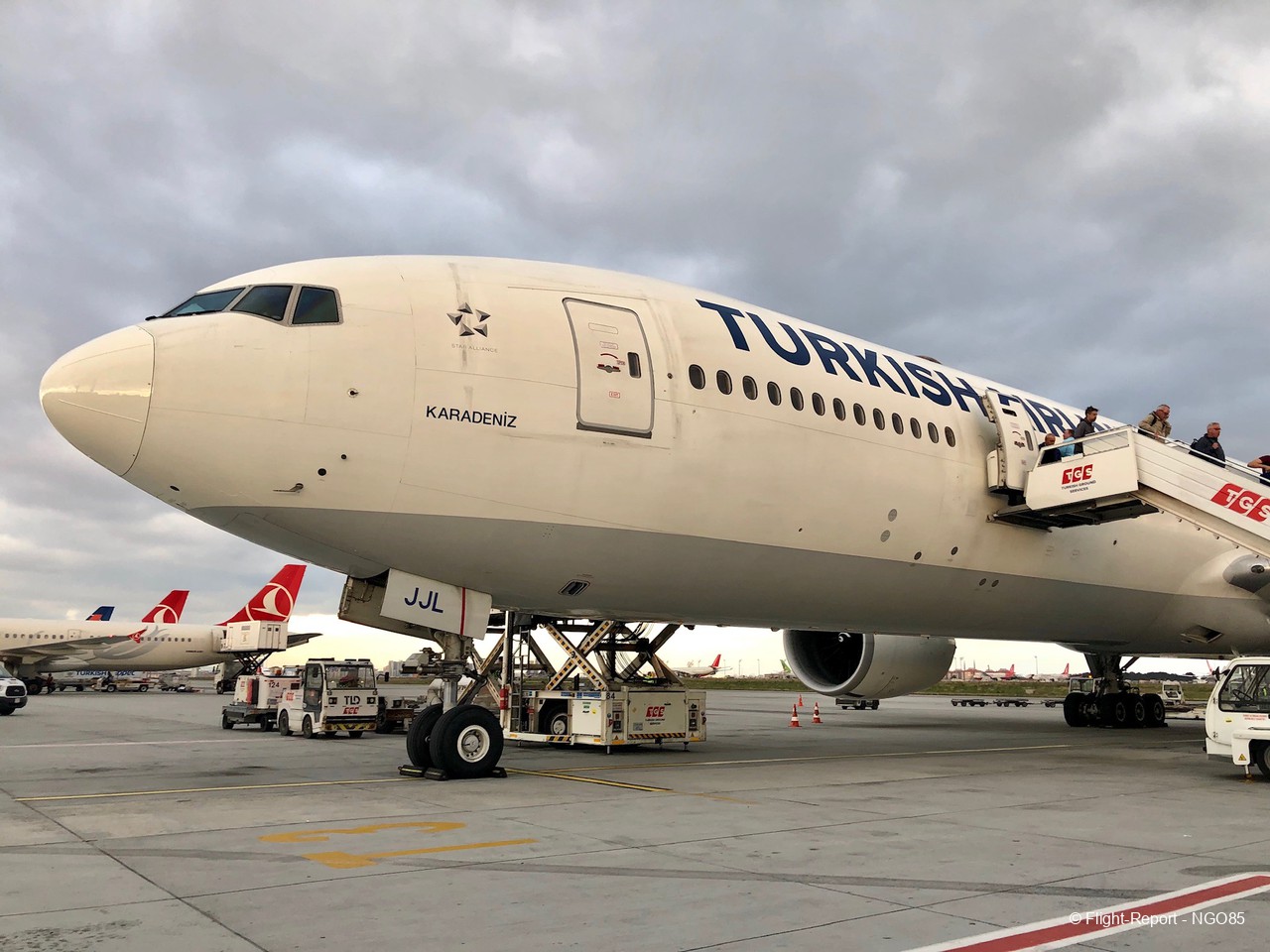 This is where I will leave off this series as I begin my short stay in (old) IST. Thanks for stopping by!

My first long-haul TK experience didn't quite end the way I had anticipated. I knew going in the hard product was going to be poor, but what stood out the most was how flat the Do&Co catering was (which is supposed to be their big selling point). That said, I would give them another chance if the opportunity arises since a lot of the issues are probably being resolved with the J cabins and I probably just got poor catering, which is strange ex-LAX.

LAX:
- Brutal to access on a Friday evening and backlogged as usual with the heavy TATL departures in the evening that run into the start of the TPAC departures.
- *A Lounge just keeps getting more and more crowded with the increased capacity of flights, the catering is okay, but not fantastic (Polaris Lounge just opened at this time so that will be my go-to moving forward).

Flight:
- Cabins are extremely outdated, can't believe they are still using this hard product on the B777s. They lack both storage and privacy, but sleeping was quite comfortable.
- Catering was a large disappointment based on what I've previously seen on TK on short/medium haul routes ex-IST. The appetizers were just average and the entree was not very enjoyable (not to mention that they ran out of 2 of the options by the time they reached the last ~30% of the cabin). The breakfast was complete (you pick what you want so obviously you only have yourself to blame for the quantity).
- The crew was not very warm, which is fine by me. They did their jobs well and they were attentive ensuring refills, performing turndown service, and regularly present in the cabin.
- The IFE has a decent selection, might be an issue on a longer daytime flight. I don't like that you are forced to use the remote with IFE to navigate the menus. WiFi is also offered, but I didn't use it on the flight.

Old IST:
- Paxbus on a B77W, I guess the New IST couldn't come soon enough.
- I was doing an international-to-international transfer, which was quite easy and doesn't require additional security.

The contributors of Flight-Report published 5 reviews of 1 airlines on the route Los Angeles (LAX) → Istanbul (ISL).

The average flight time is 12 hours and 52 minutes.