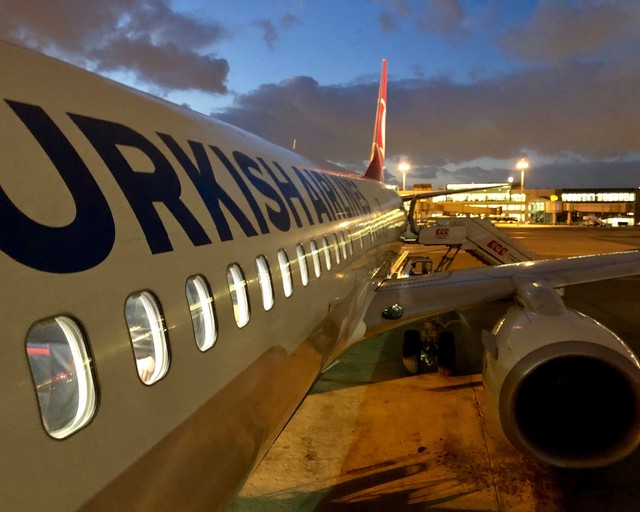 #16 out of 74 Airlines A minimum of 10 flight-reports within the past two years is required to appear in the rankings. 685 reviews

This series will be revealed as we go since it was a complex routing that took me ~24,000 miles and was assembled during the trip.

The first part of this routing was a 2-week trip to Veneto. There are no shortage of options into northern Italy from LAX, but I opted to take TK since their one-way fares were very competitive. I prefer to fly into VCE, but the IST-VCE flight times are incompatible with the arrival times of the TATL flights from the west coast so I had to settle for a LAX-IST-MXP routing and settle for a 3 hour car ride from Milan.

This report will cover the journey from Istanbul to Milan on TK's standard short-haul product.

I left off the last report after being deposited at (old) IST by paxbus after arriving from LAX. The international to international transit was painless using the indicated route. The terminal was of course very busy and so was the CIP Lounge. I only had ~45 minutes before boarding was indicated to start for my flight to MXP. I only briefly stopped into the lounge for some coffee before heading off to far end of the terminal to the paxbus zone. 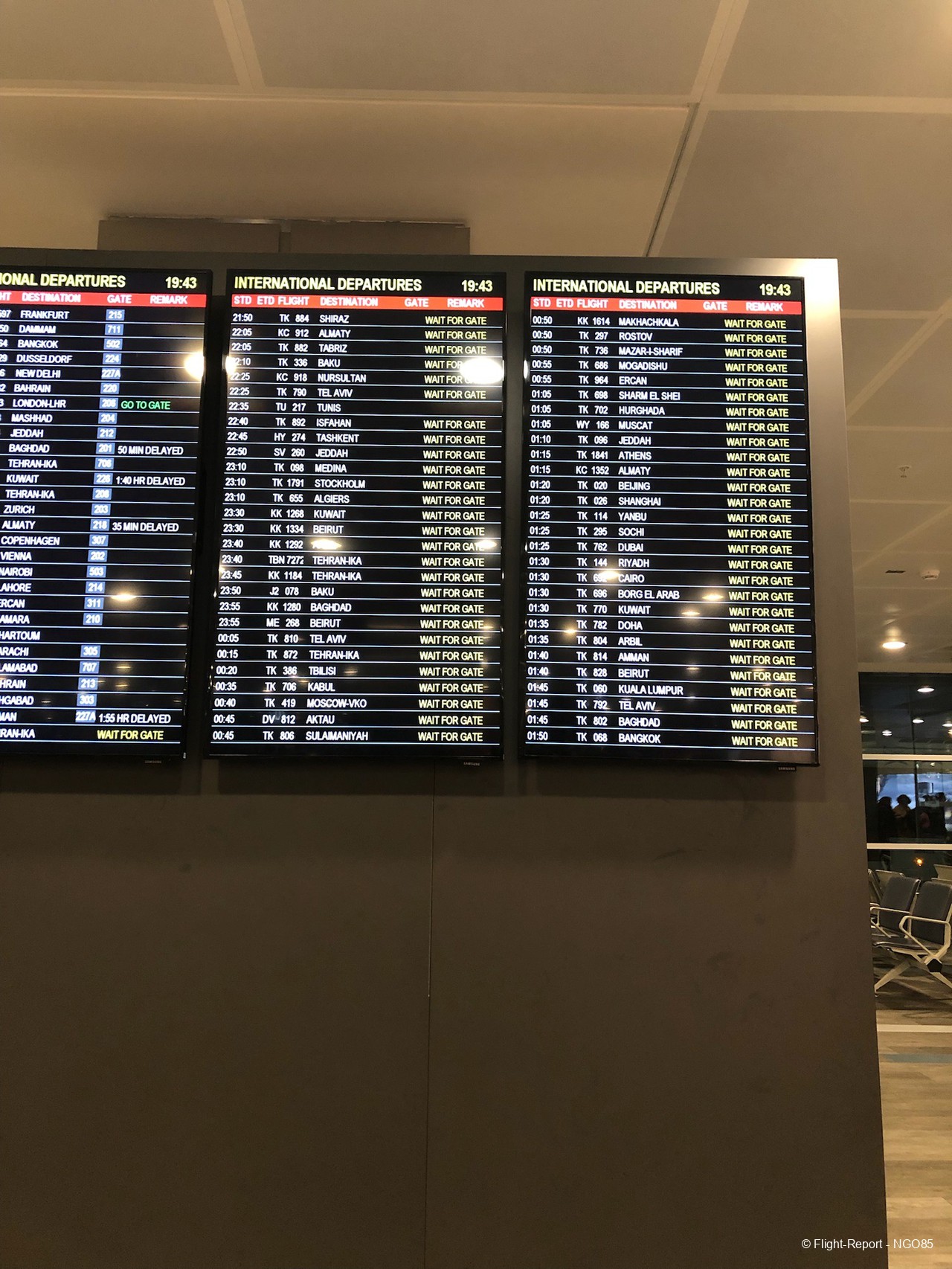 Boarding pass for this flight. 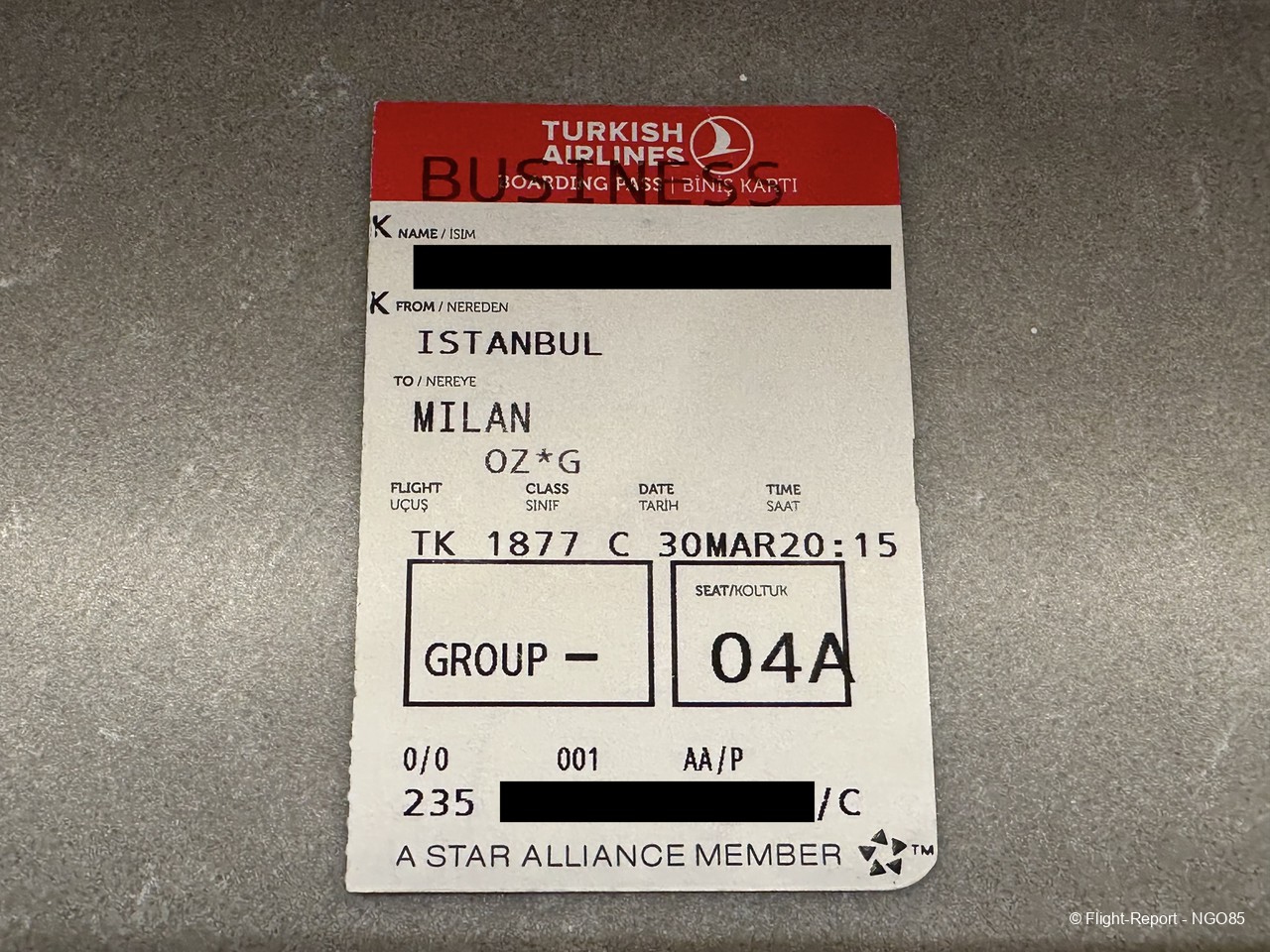 Boarding started slightly late at 19:45 despite being by paxbus. I immediately joined the queue when business was called so that I could get a seat on the paxbus. The drivers in IST are quite wild so standing is definitely not an enjoyable experience so I have learned from my mistakes.

We pulled in next to our B738, which would be boarded by both front and rear. I waited to be the last person onto the stairs so that I could get a good shot of our fuselage. 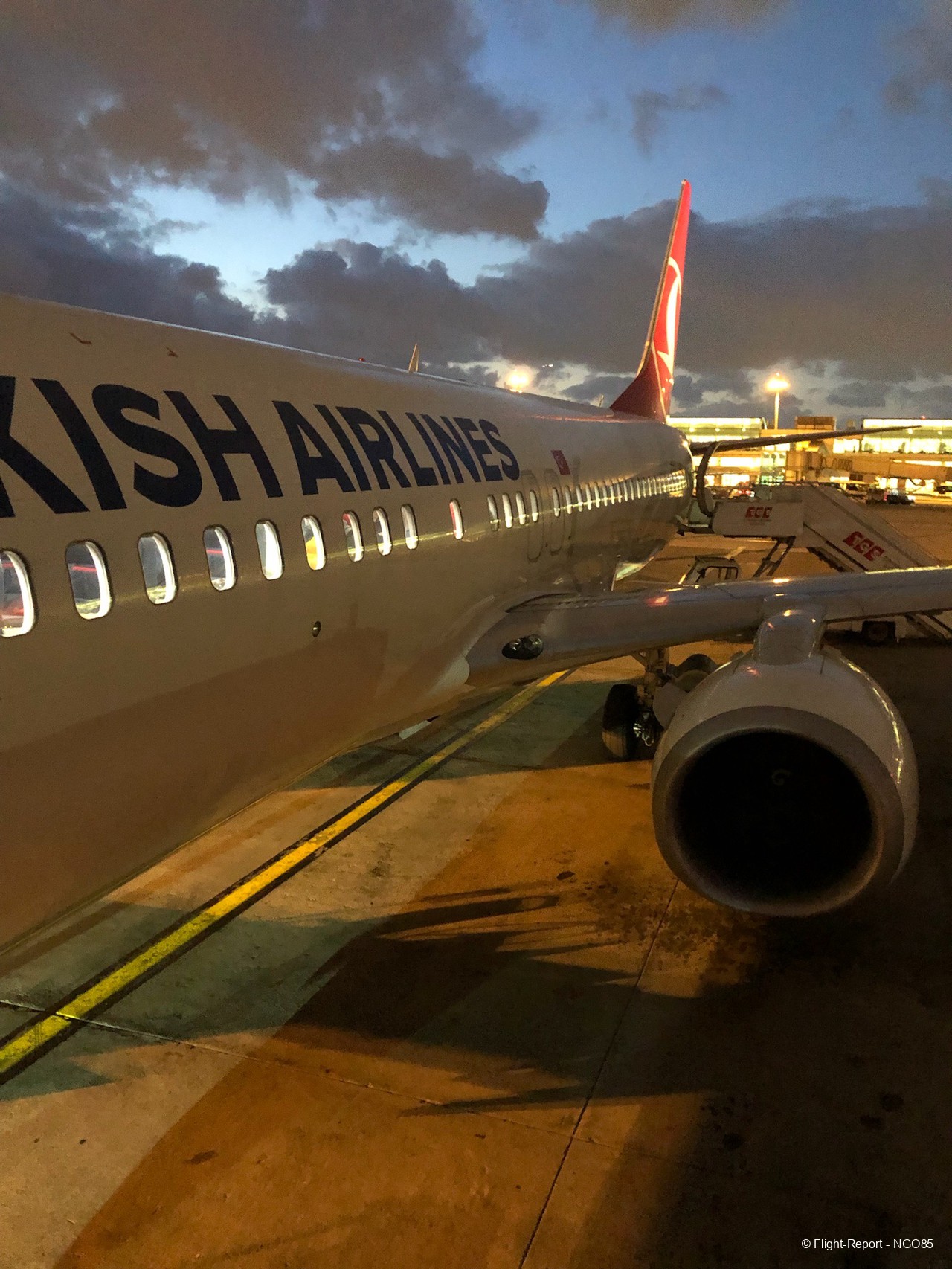 I was sitting in the last row of J in the 2-2 configuration with the "old" cabins. Arriving to my row, my seat was filled with ~8 pillows including some on the ground. I piled them onto the seat next to mine, which turned out to be unoccupied, but at no point in this flight did the crew remove them, acknowledge their existence, or apologize. 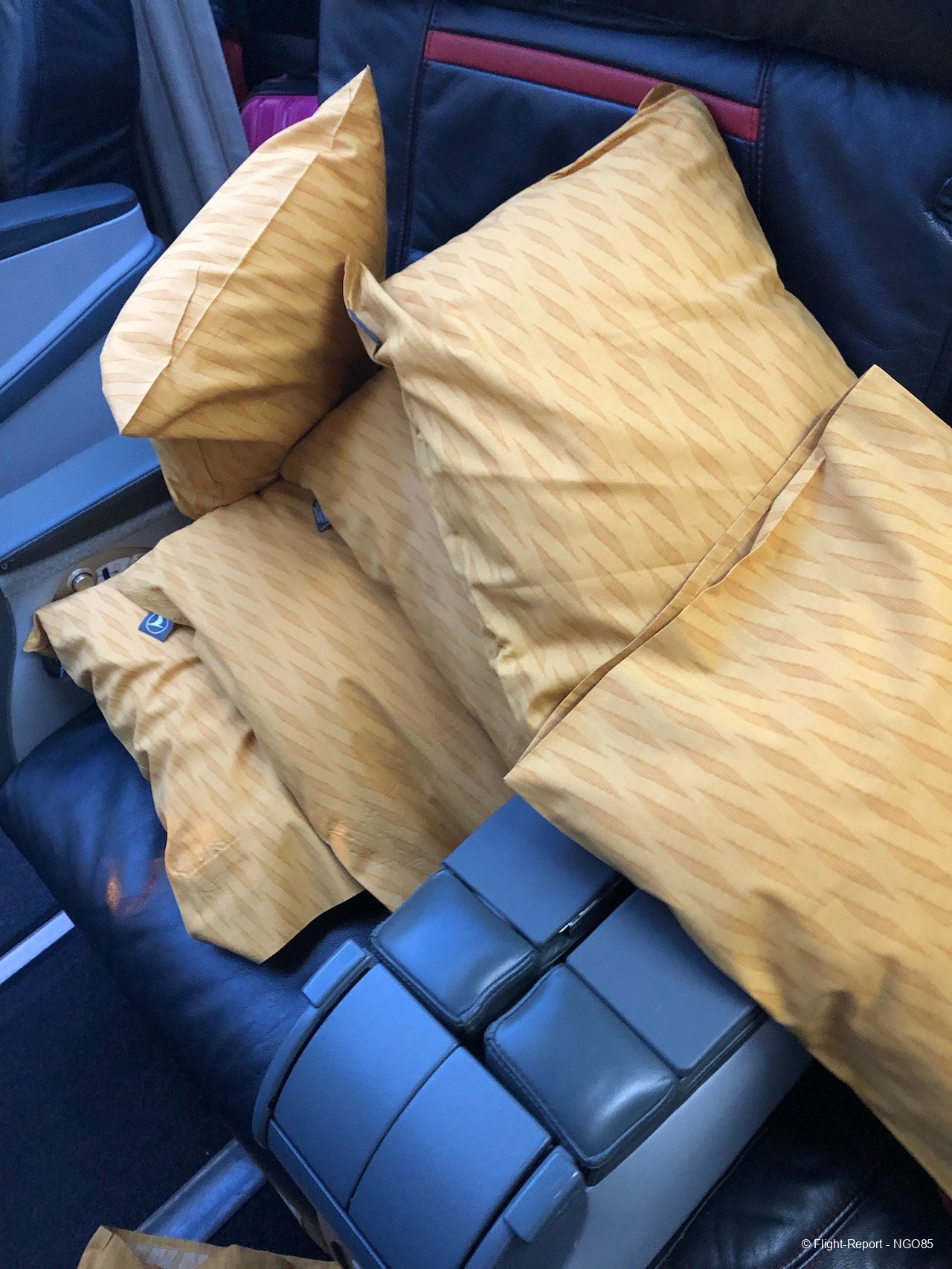 PDBs were offered from a tray with the standard TK juices and water. I again opted for the raspberry juice. You can see the pillows still on the floor at the seat next to me. 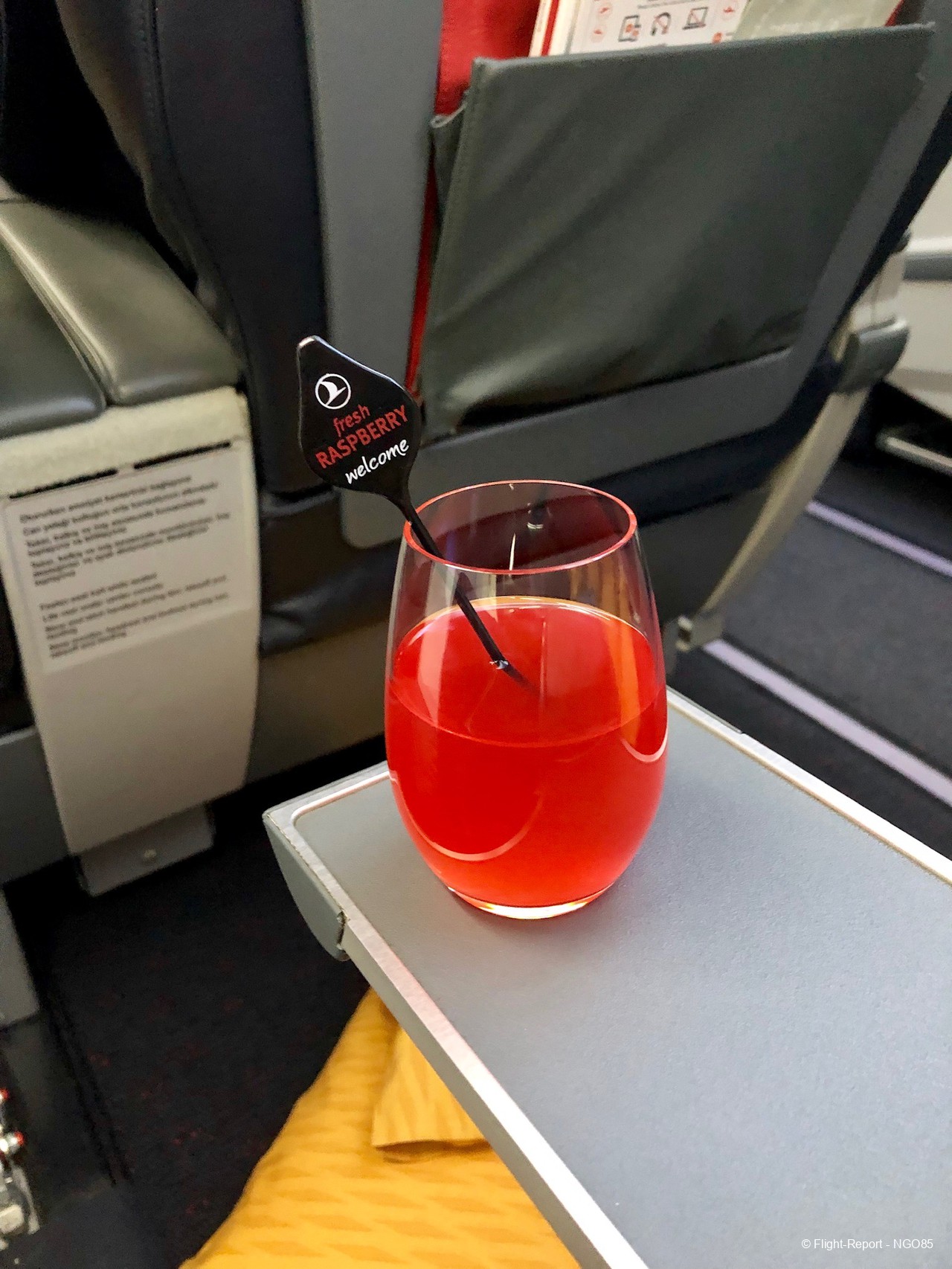 Menus were distributed and meal orders were taken as we waited to finish loading. 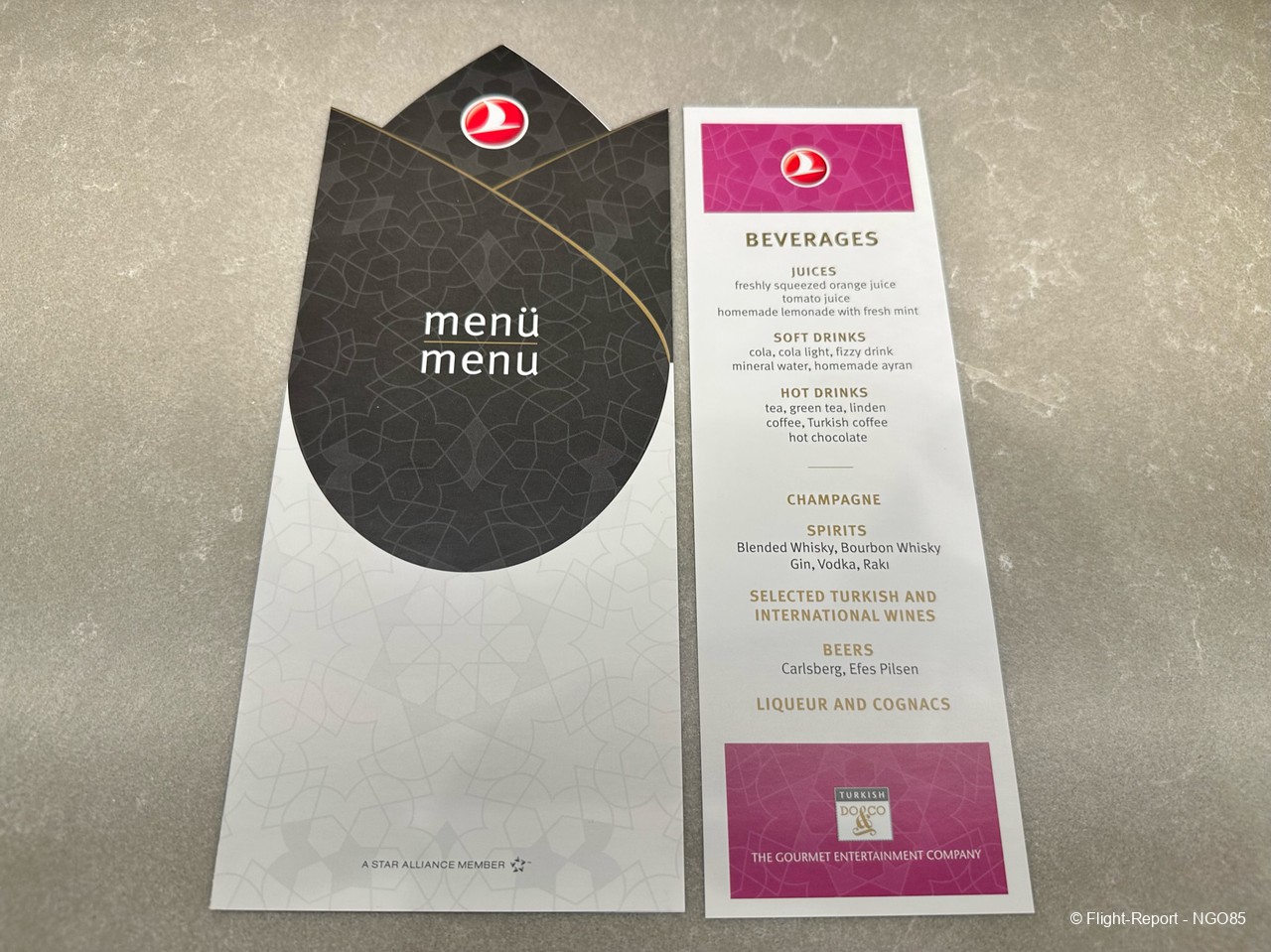 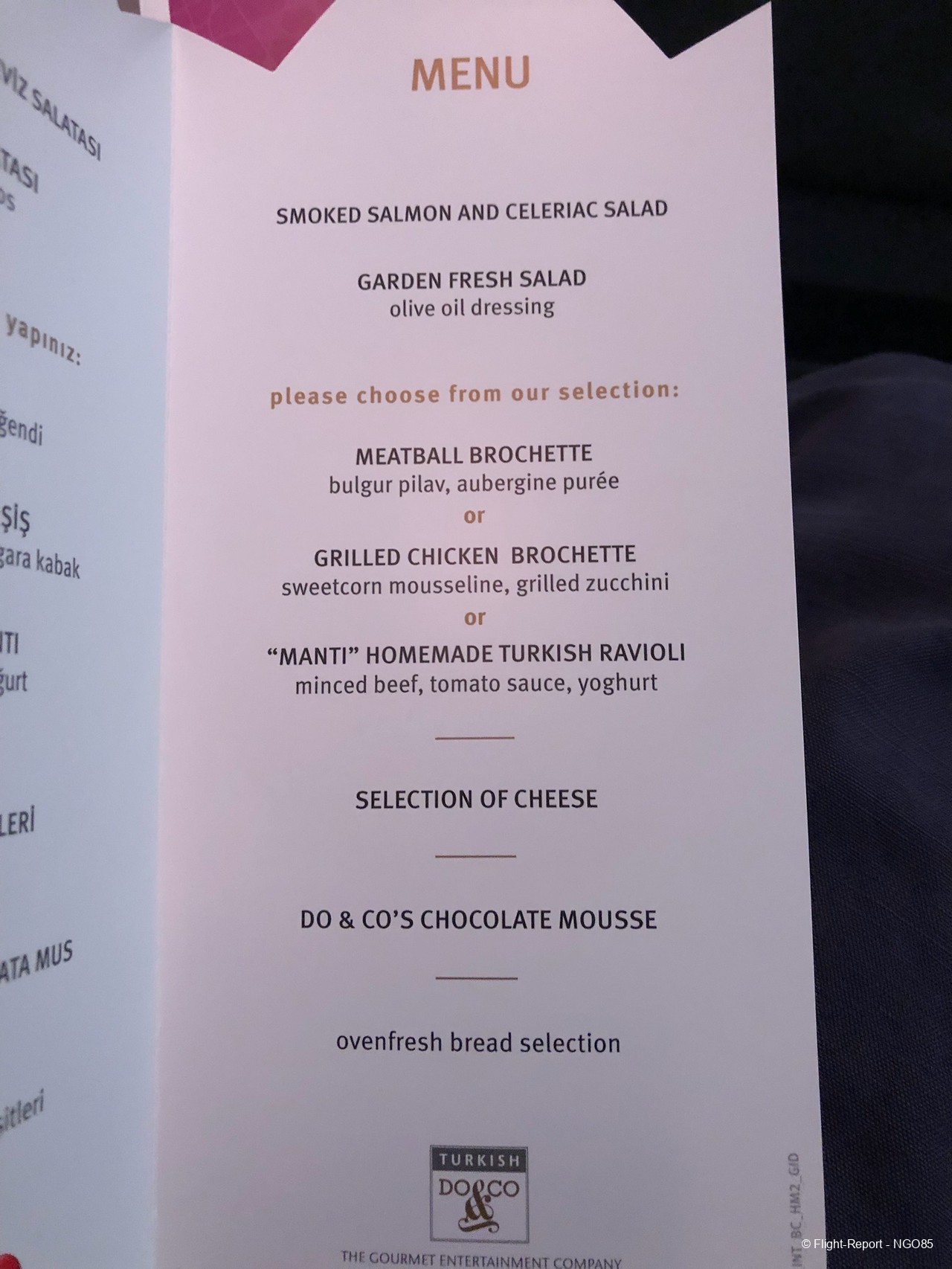 Since we had to wait for 3 buses to arrive at the remote stand, we initiated push back pretty late, but at least got to smell the jet fumes as our neighbors to the right and left departed. We had a short taxi to the runway from our remote stand and we were off…

A sampling of the eclectic seat back contents as we continue our climb out of Istanbul over the mouth of Bosphorus before circling to the west to start our trek north into the Balkans. 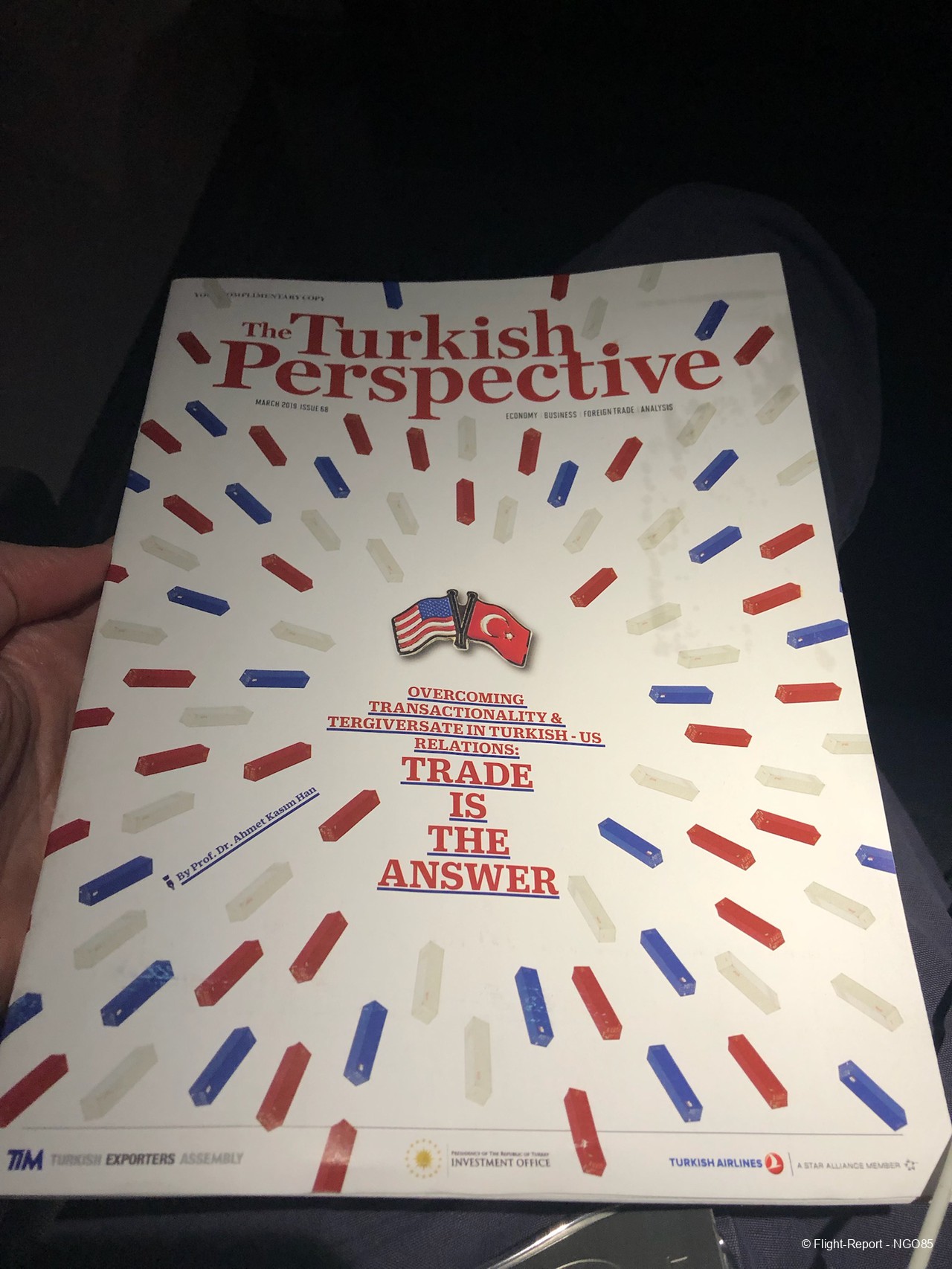 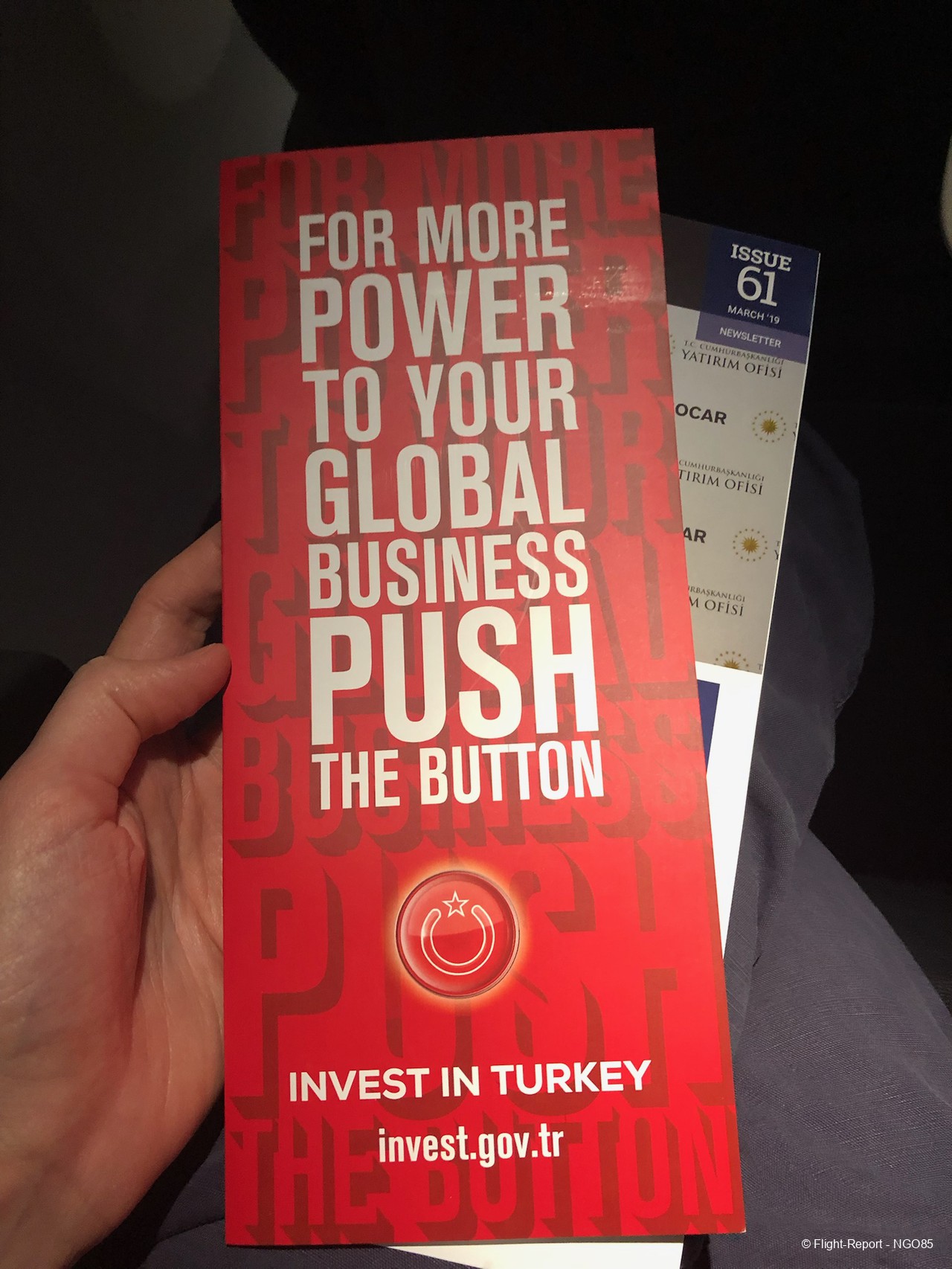 They did honor International Women's Day though, which was earlier that month. 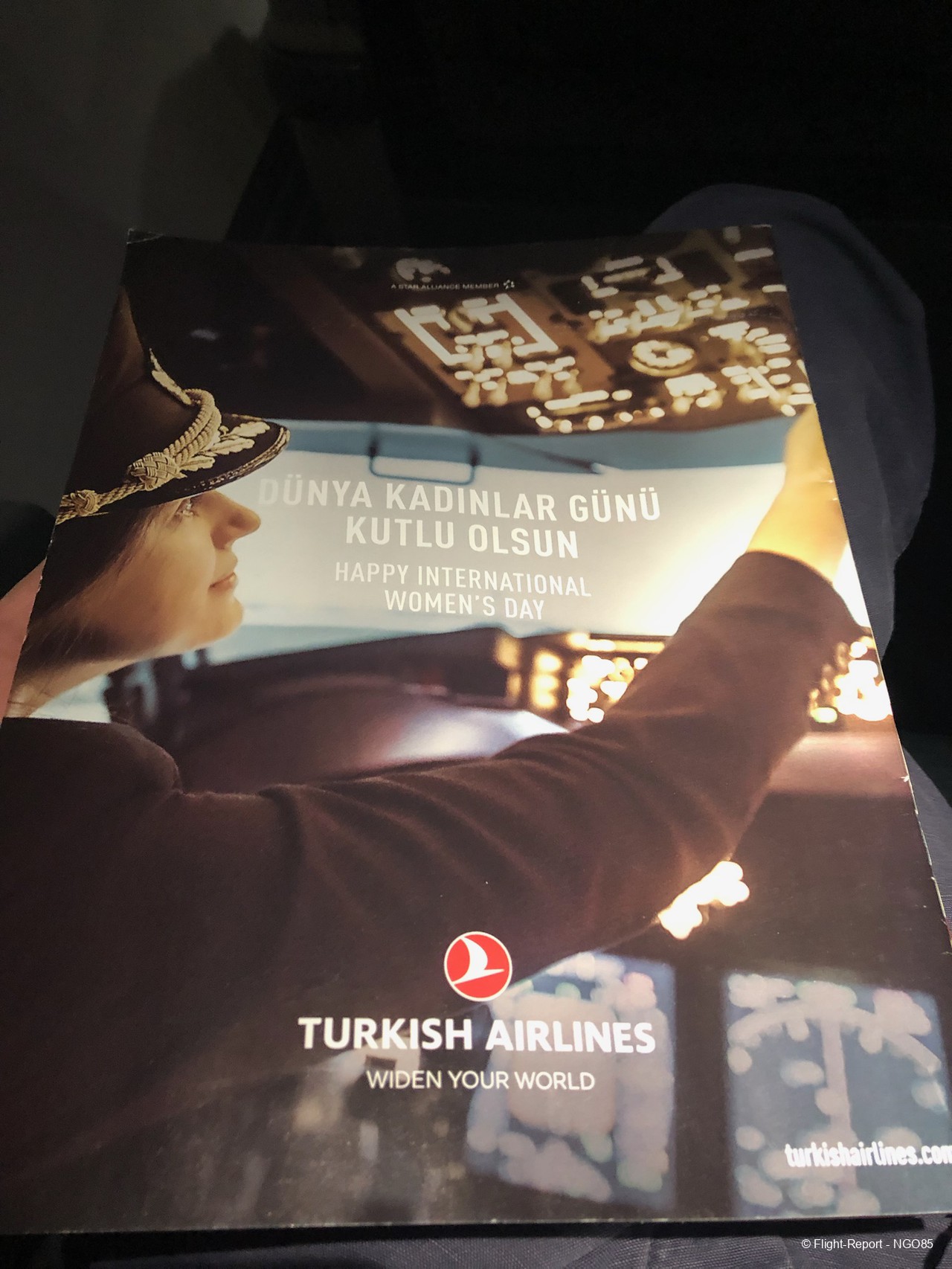 The flight did have WiFi, which provides a whopping 10MB free if you have a Miles&Smiles account. I did not test it out. The IFE screen folds out from the center console and is standard size and the content was more than sufficient for a short/medium haul flight. 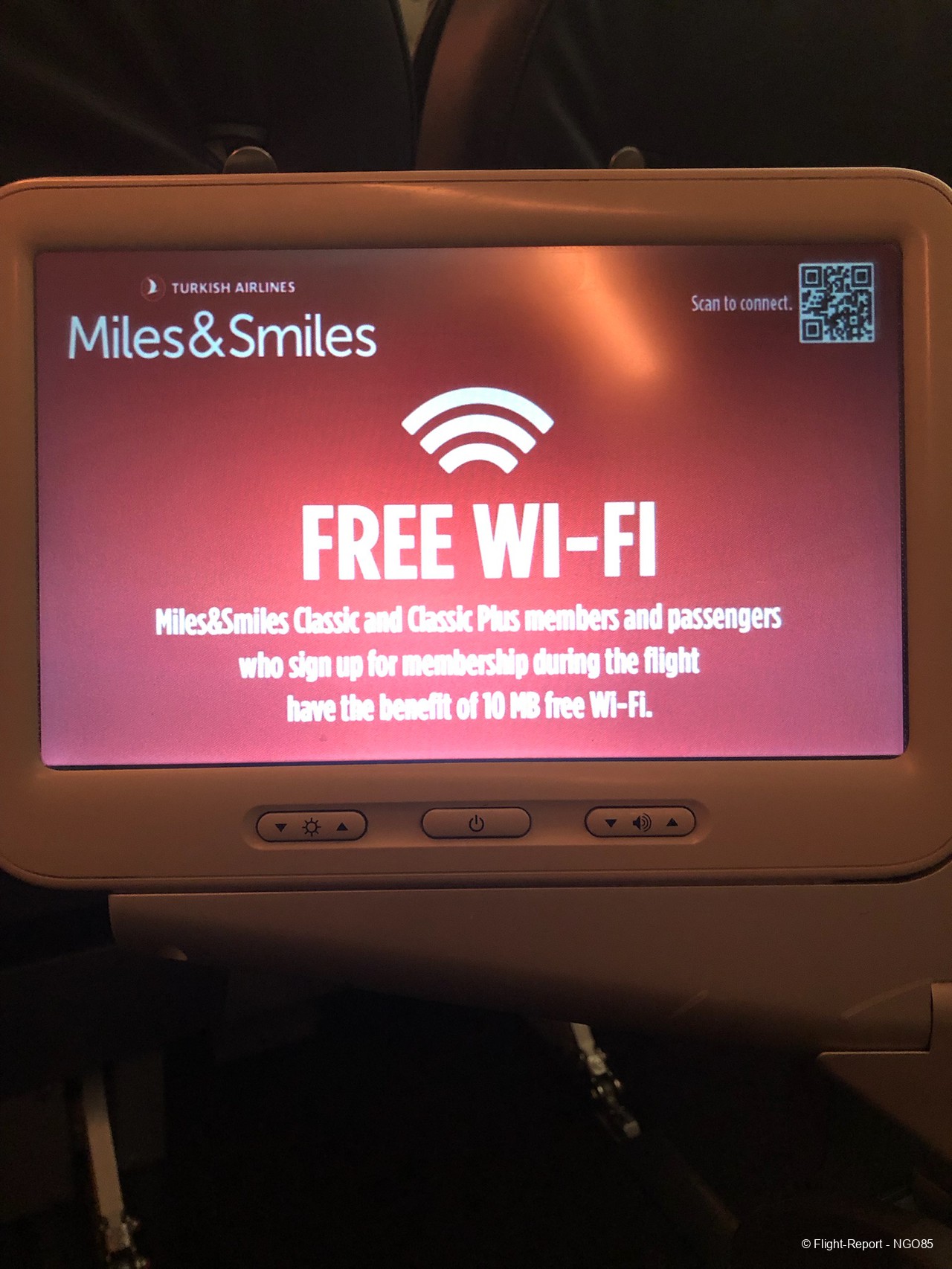 Linens were laid and my tray was brought out. The tray contains the starter, salad, cheese plate, and dessert. Only plastic salt and pepper shaker minarets unlike the fancy magnetic ones on long-haul. Warm breads were offered from a basket. Drink service was done at the same time and I just took a glass of water. The smoked salmon starter was very good. 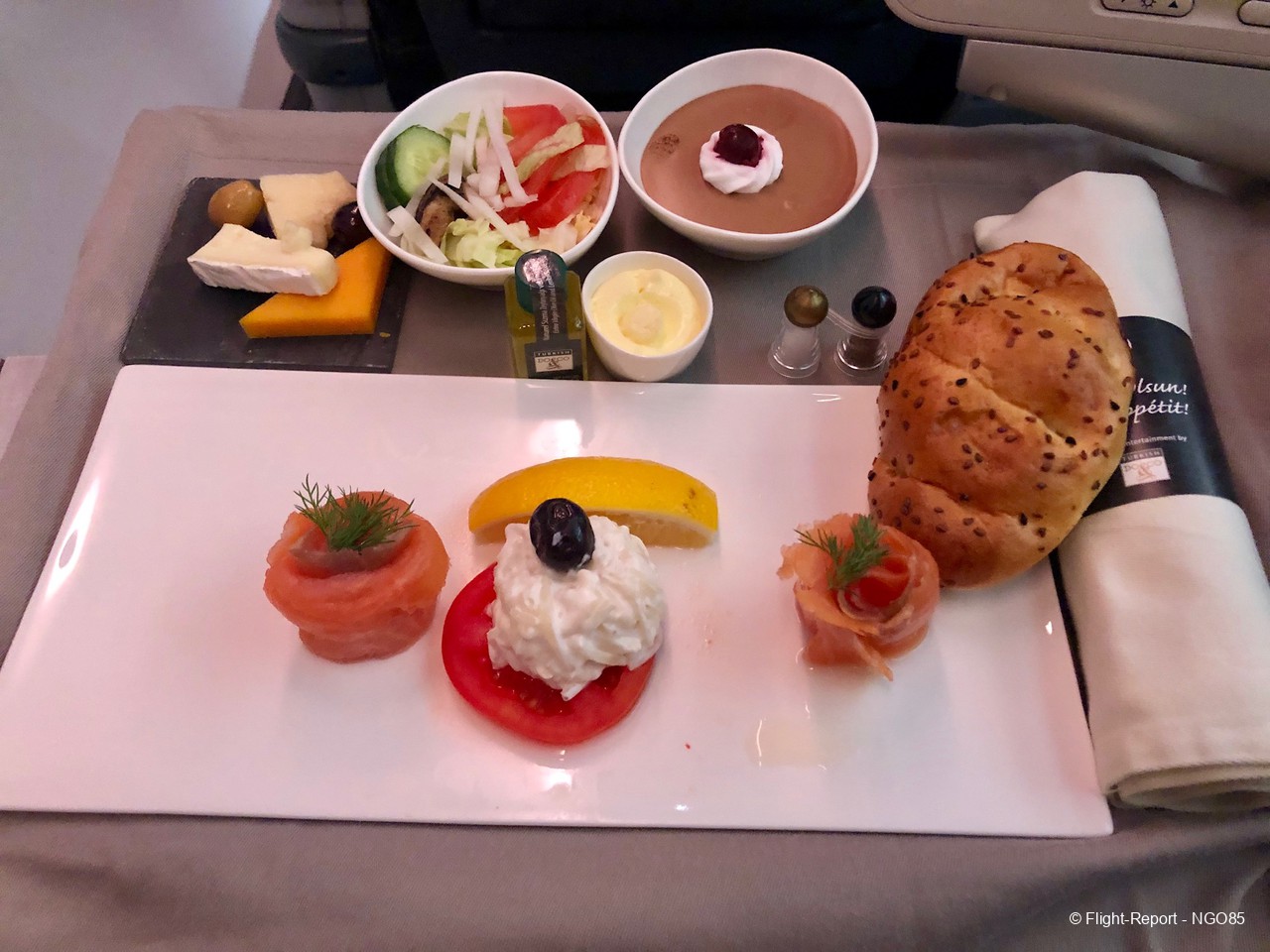 My starter was removed and my pasta dish (manti) was brought out. A very good and flavorful dish of little beef raviolis with yogurt and tomato sauce. 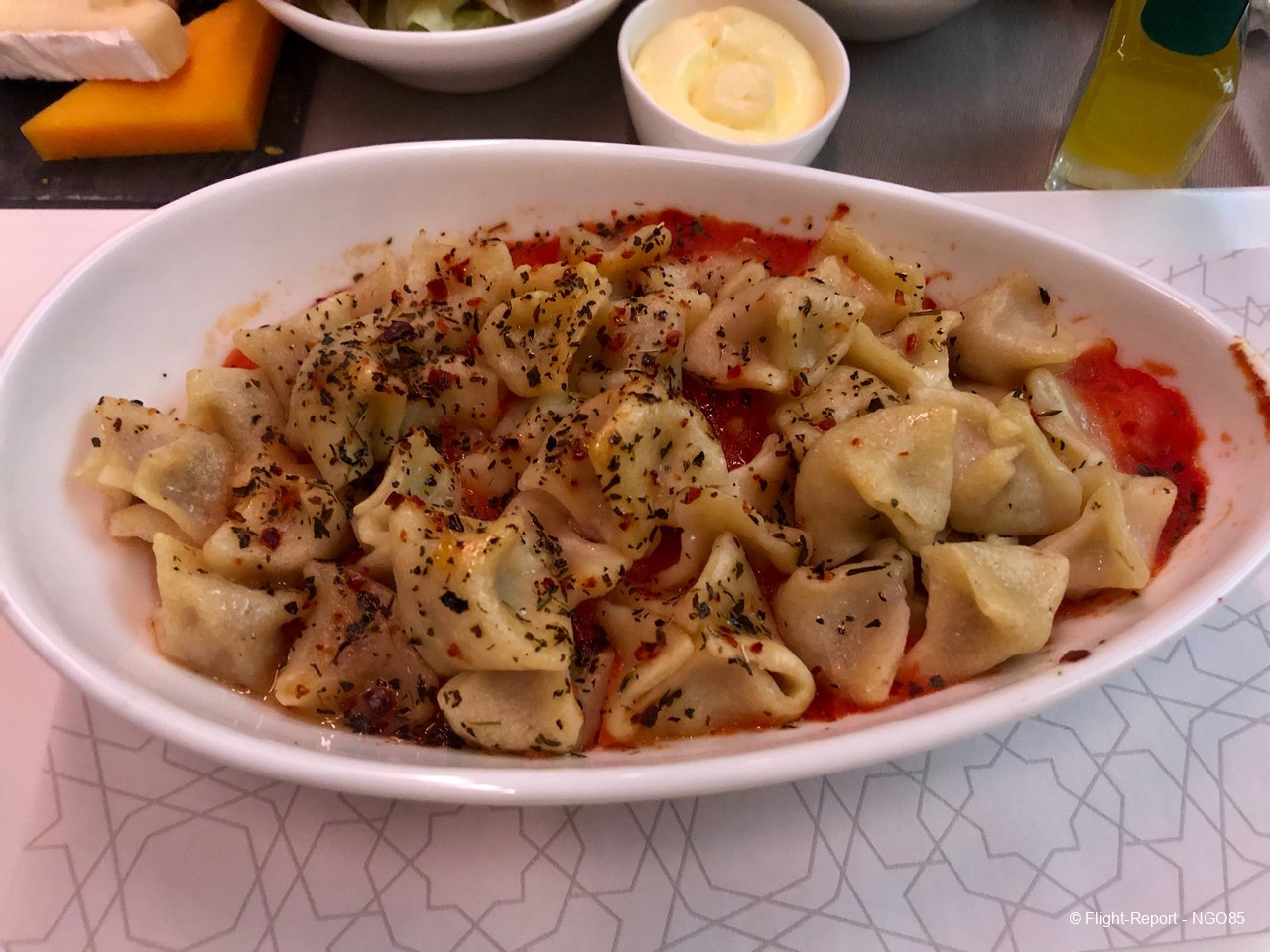 Cabin shot mid-flight, the load was just 7/16 on this sector. 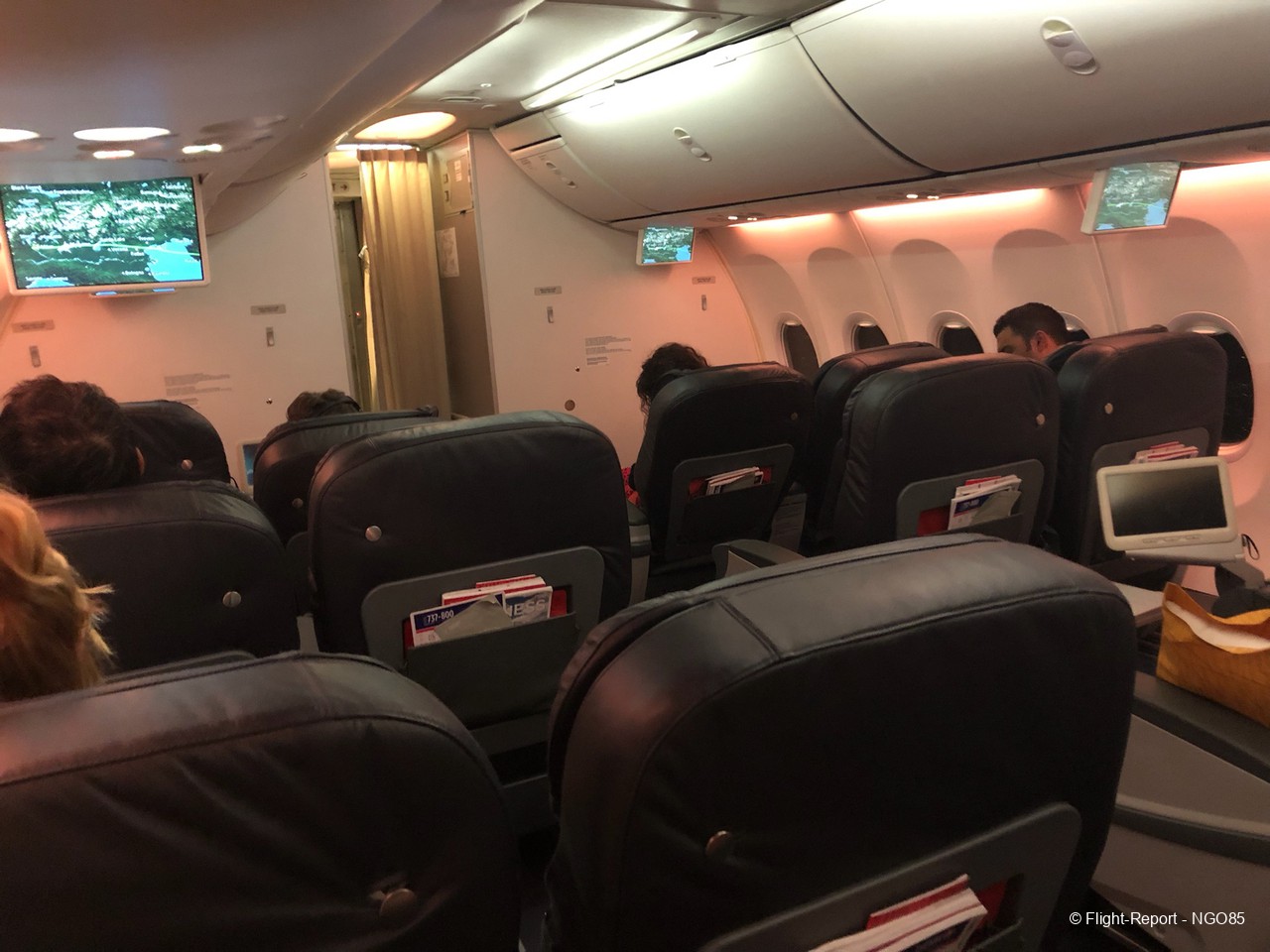 I finished the meal with a brandy before dozing off. 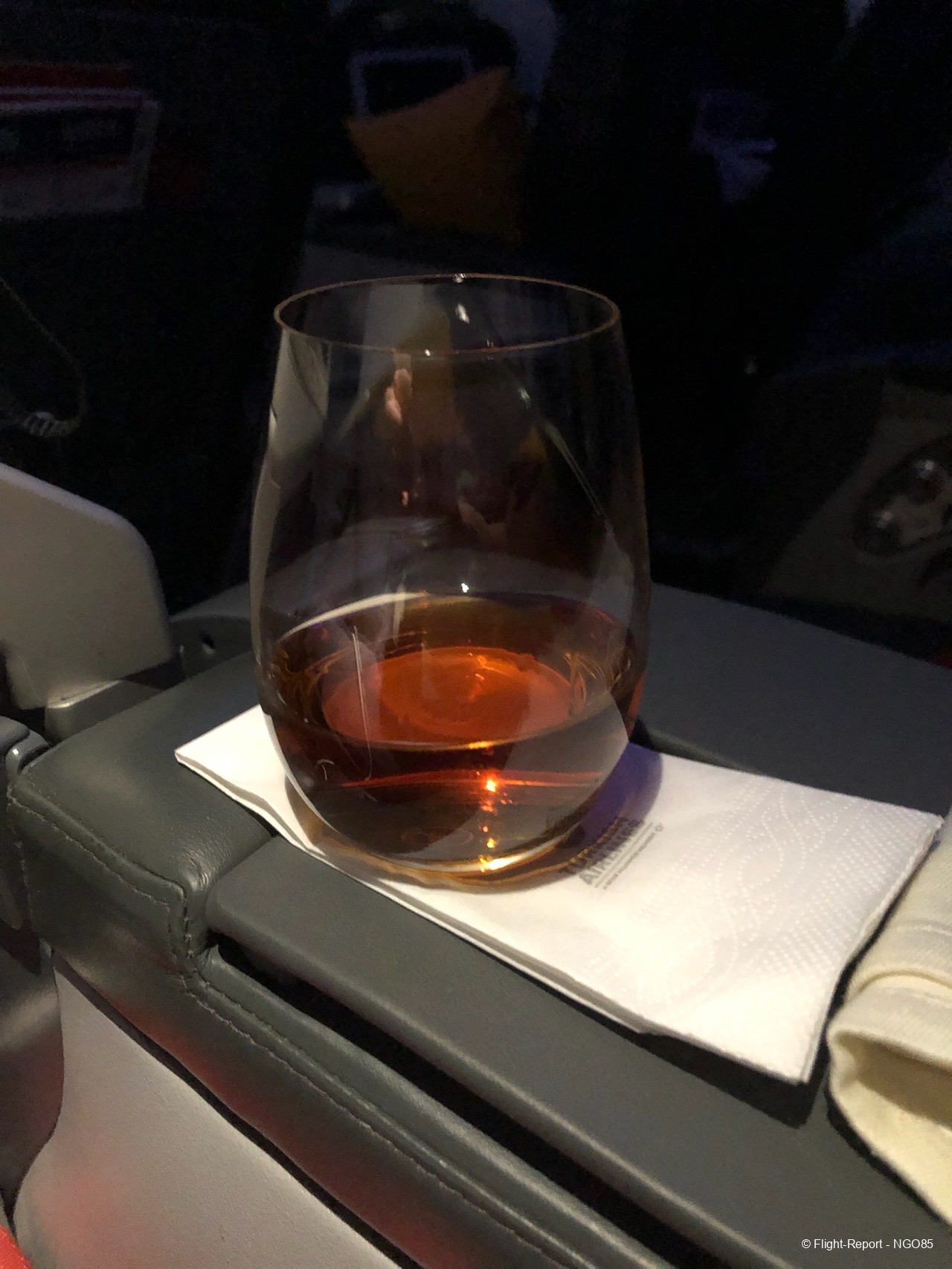 I was awoken as we started our final descent into MXP. I quickly went up to use the lavatory, which was reasonably clean and contained the same Molton Brown products as on the long-haul aircraft. 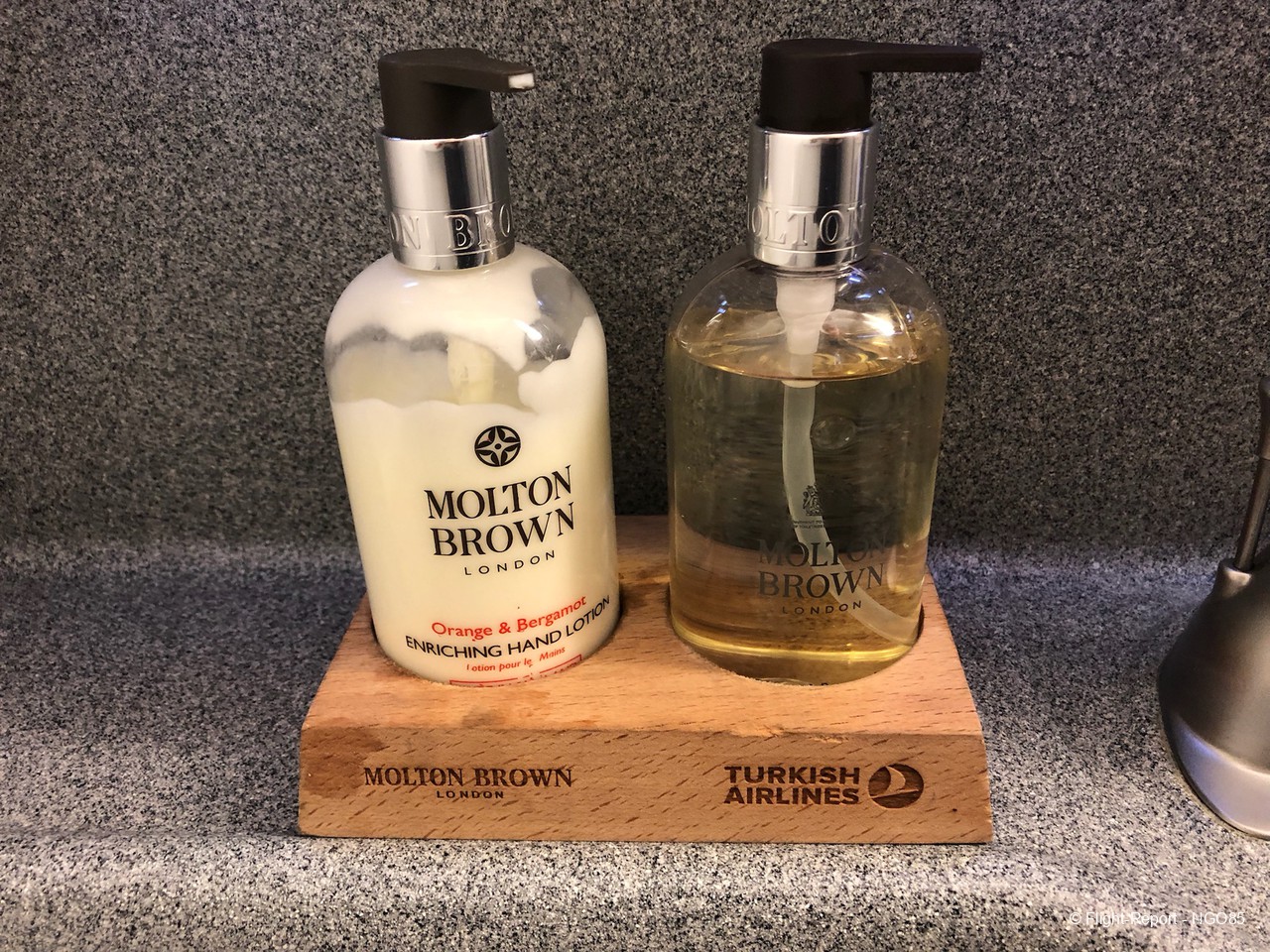 Back at my seat, I was in time for the aerial tour of northern Italy along the E70. 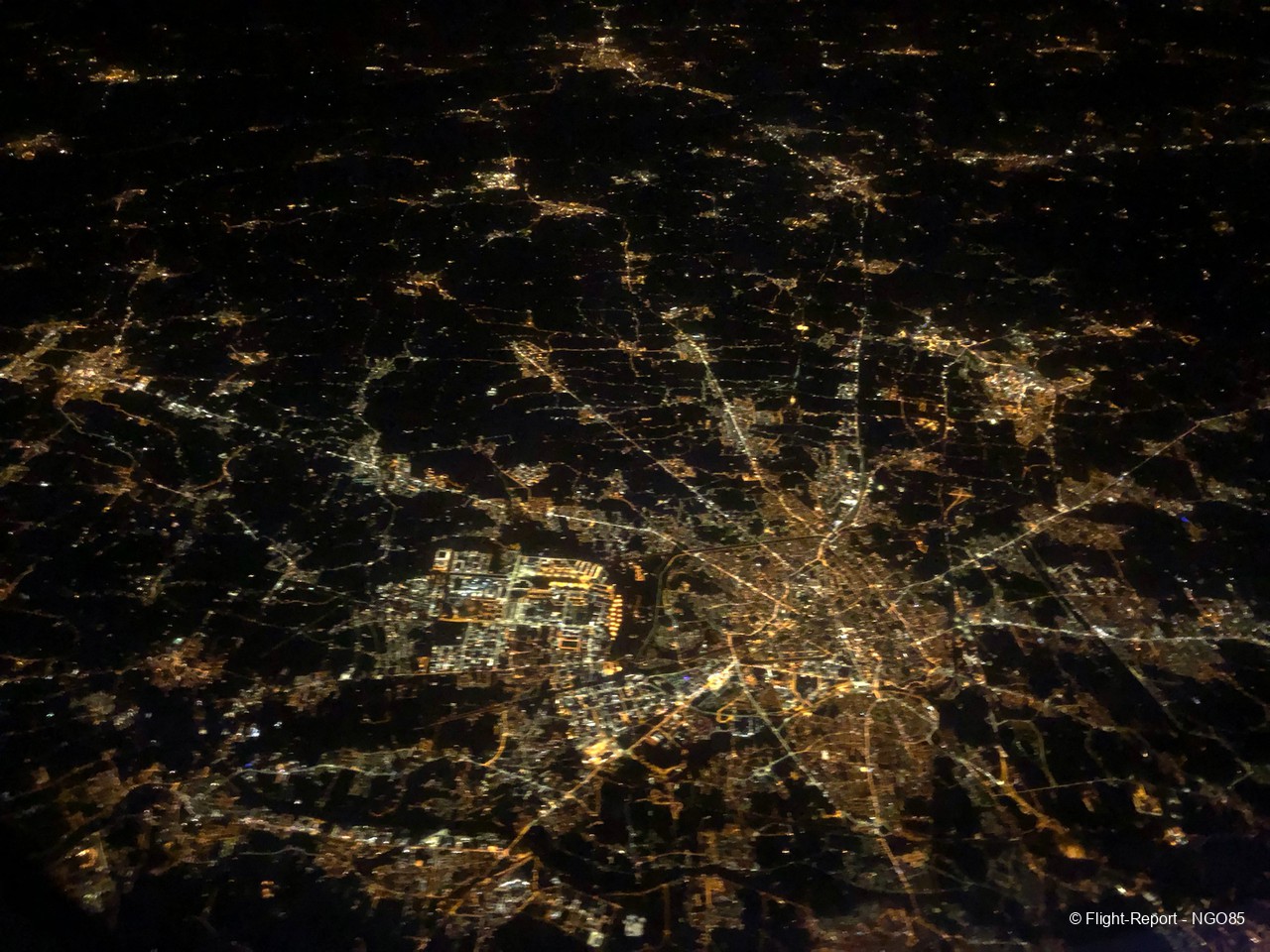 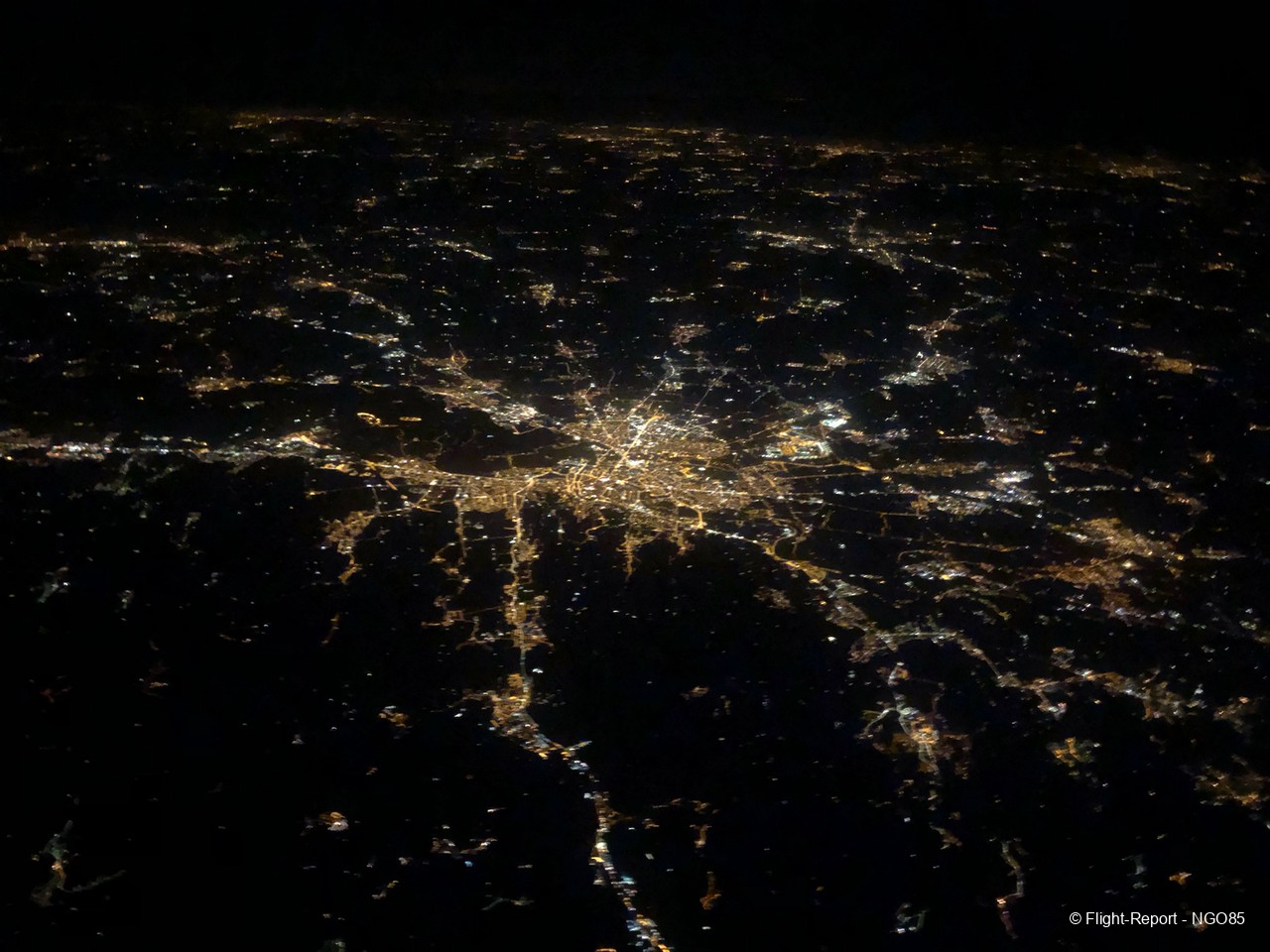 The little peninsula of Sirmione as we cross over Lake Garda into Lombardy. 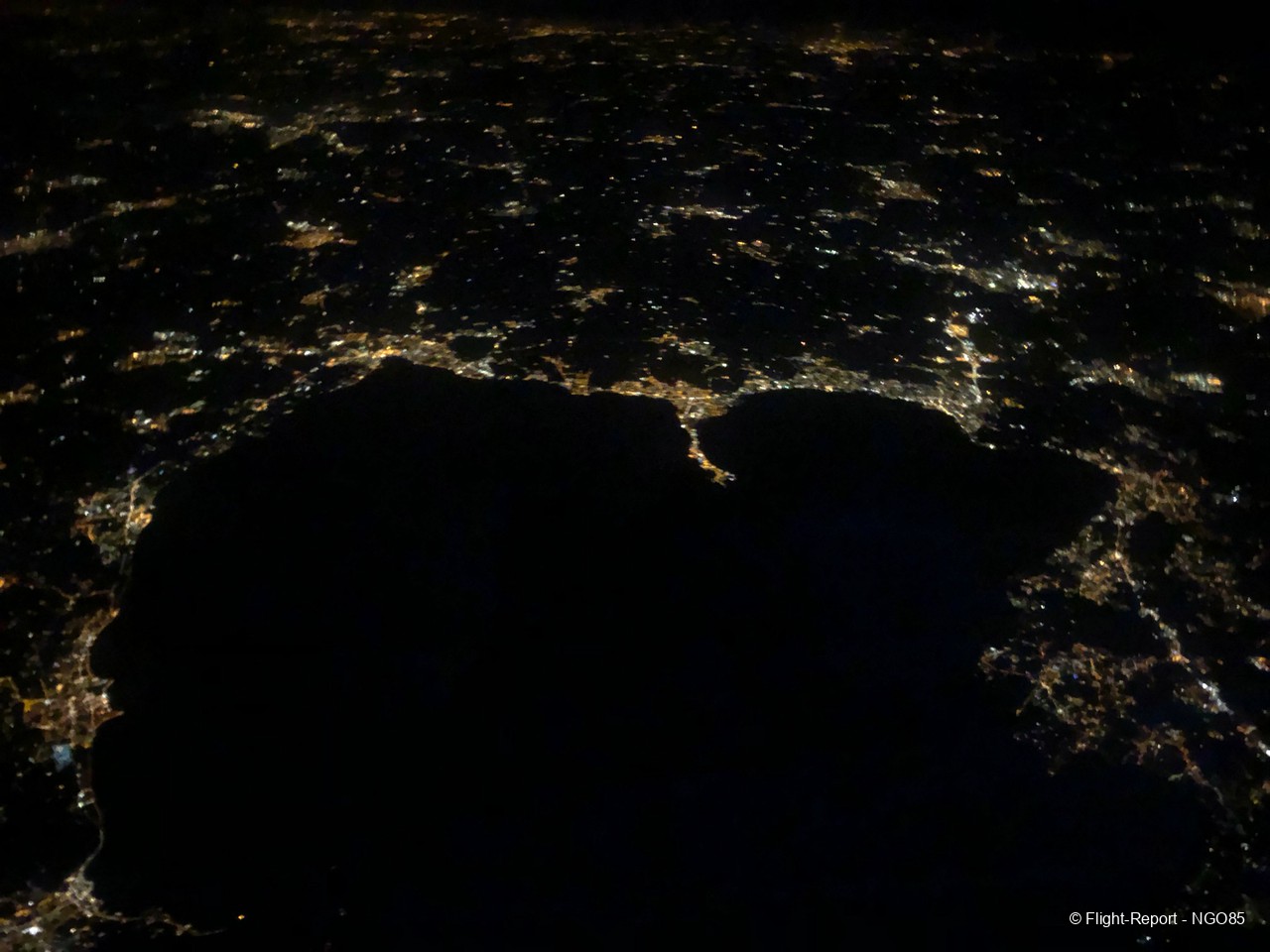 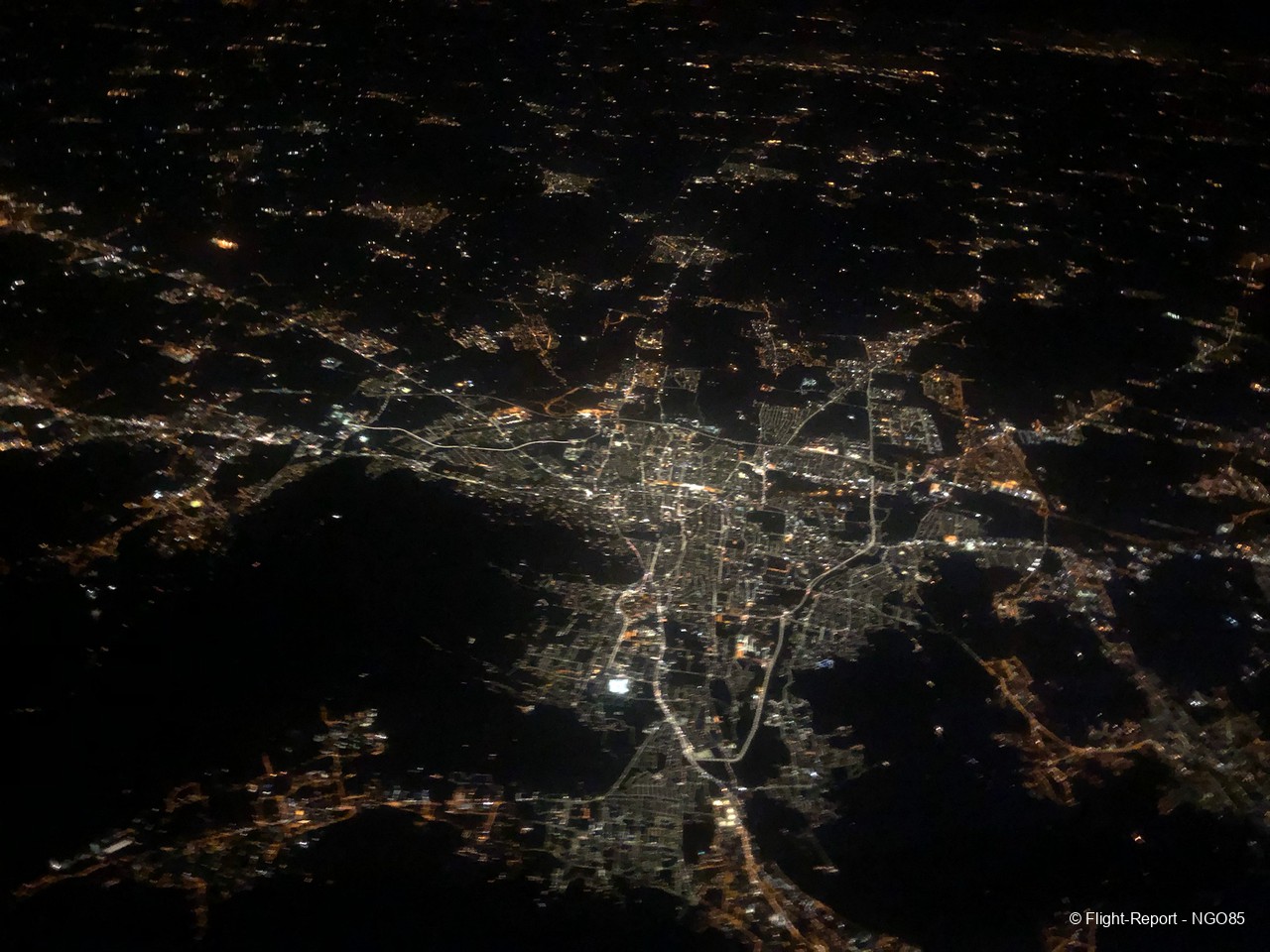 Our route was a very direct arc over the Balkans. 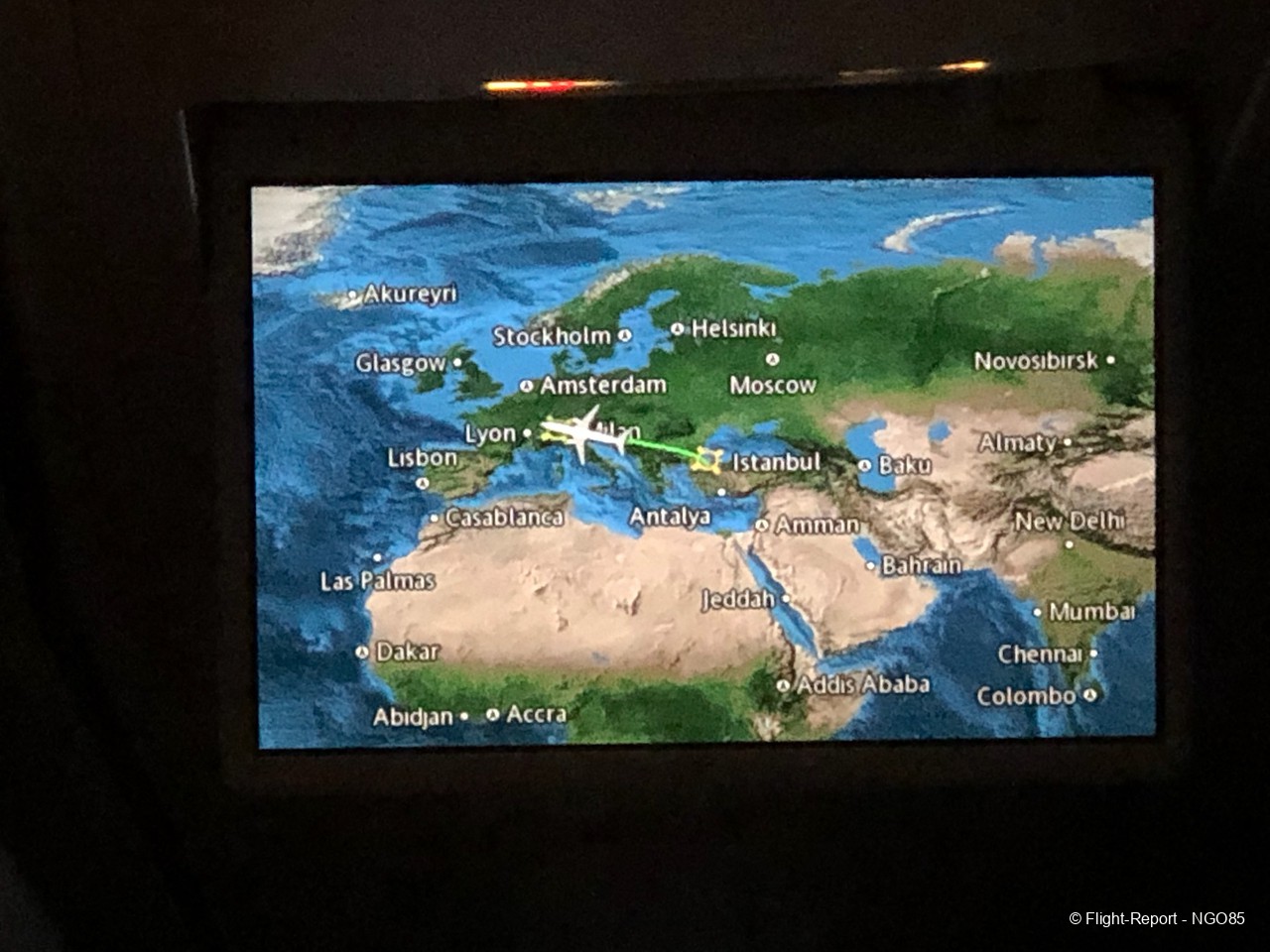 We had a fairly short taxi at a very empty MXP and were at our gate well ahead of schedule. 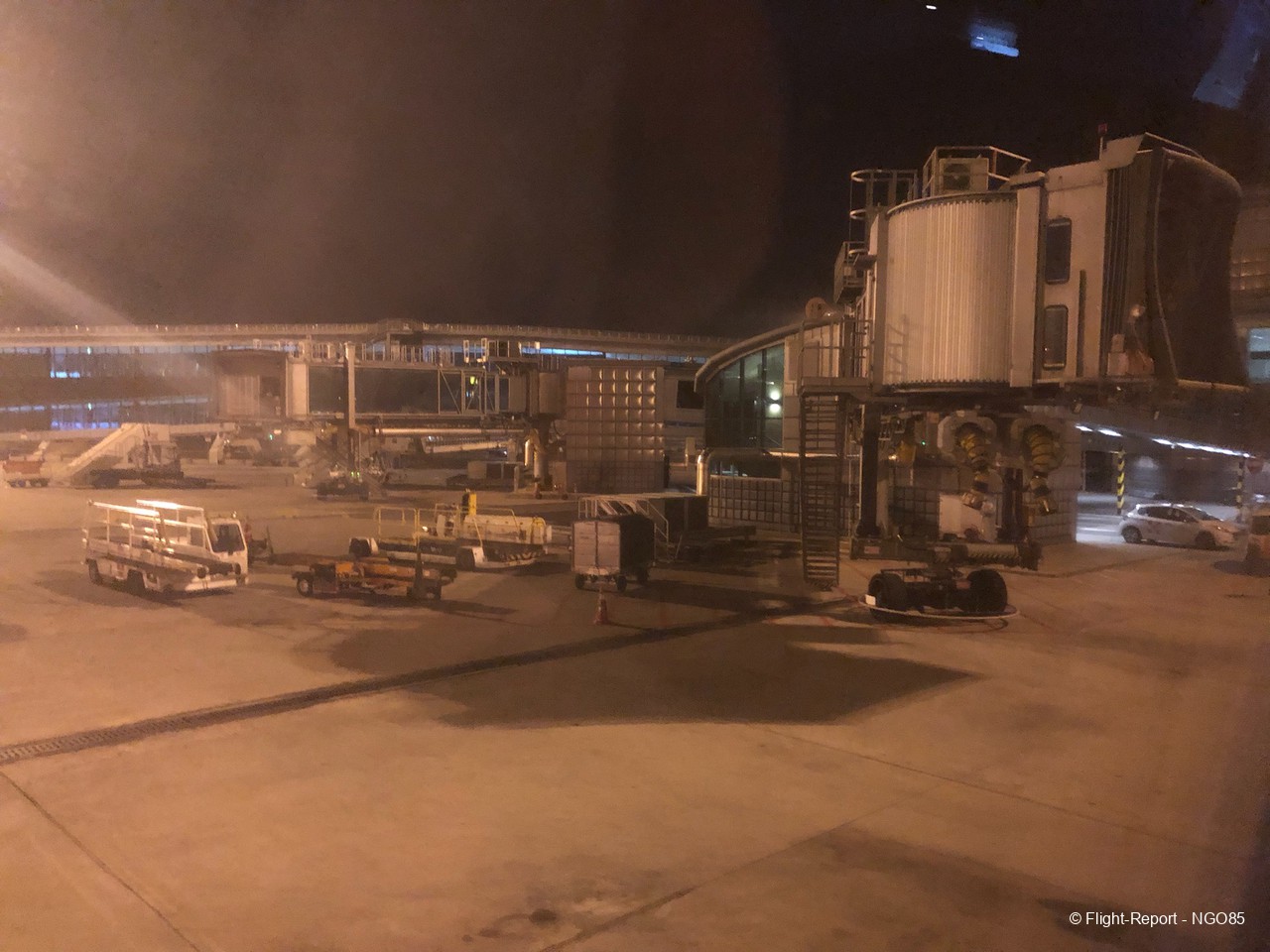 This little KL car parked next to us as the jetbridge engaged as our plane was getting ready to be serviced for the return to IST. 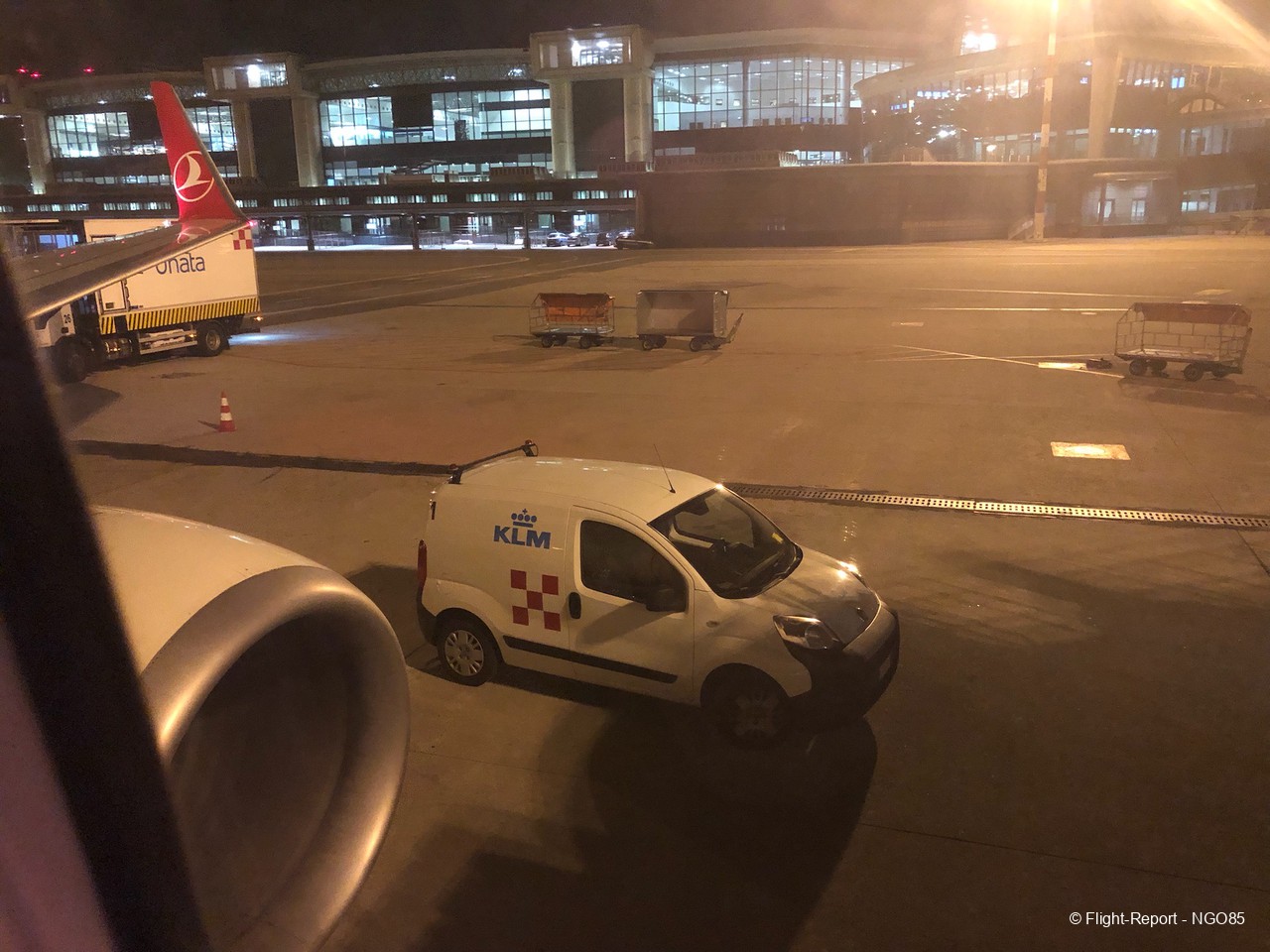 Arriving so late, the airport was a ghost town and immigration was a breeze. I collected my bags and made my way over to the bus stop to collect my shuttle to the hotel. I decided to just wait and collect my rental car the next morning to start the 3 hour drive into Veneto with a stop in Mantua for some afternoon sightseeing.

That's where I'll leave off this series, thanks for stopping by!

Unlike the previous flight, this was a more standard TK experience. TK is in a separate class for intra-European J comfort and their catering is excellent. The older cabins do have some outdated IFEs, but again it is well ahead of the competition in Europe. The only criticism is their crews, but their service is usually decent despite being cold. Overall, they are definitely one of the best options and the "back-tracking" required from North America is not a big inconvenience if you can get a reasonable layover time in IST.

Old IST:
- Efficient transit, but crowded.
- The CIP Lounge was okay, but again crowded. It felt like TK started to let it go a little bit since the new IST was opening soon.

Flight:
- These aren't the most modern of cabins, but still very comfortable for a 2 hour flight.
- Catering was as expected on TK. The appetizer was very good and the main was very good. The salad and dessert are just average and not different than what is served in Y.
- Again, a cold TK crew. They were attentive during service, but the whole pillow situation just highlights their attitude.
- The IFE has a decent selection, but the screen is older and lower resolution than the overhead monitors. WiFi is also offered, but I didn't use it on the flight since only 10MB was free, which might let you check some e-mails.

MXP:
- The airport was empty at this hour, so immigration was a breeze and bags were quickly circulating.