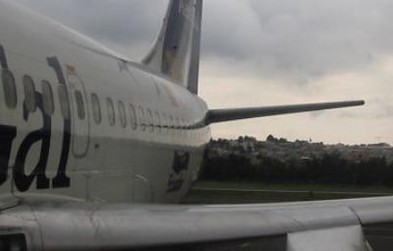 By Chibcha SILVER 2433
Published on 11th March 2014
Hello everyone! As I've already covered all recent flights, I plan to do FR from past trips. So welcome to this retro-FR, for the Throwback Thursday's sake.

This was a trip I did to Quito during my last year of school. It was exciting as it was one of many first: first time to Ecuador, first time on a then dodgy airline, AeroGal and first, and probably only, time on a 737-200, fondly called chanchos (pigs) in South America.

We arrived early to to the Airport, then still served by the 1950's terminal. Check in was a breeze, had our boarding passes filled by hand (Really retro). Said goodbye to my dad and off to the McDonalds to have breakfast with my friends. Emigration was quick for most of us, except for a friend who has three citizenships, the migration officer thought his passports were fake, and then hell broke lose. Calls, visits to supervisor, etc. Since we were travelling with a teacher he intervened to have him out. Eventually the issue got fixed.

Then police check (at the time you had 2 security checks at BOG, 3 if you were going to the US), the same guy with the passport deal got busted with his bag filled with Aguardiente (Colombia's signature alcohol), our teacher made a fuzz, but not about taking booze to school activity, but for wasting the guaro since it got confiscated.

We got to the Gate, and there our piggy was waiting for us


Besides, a (then) omnipresent maddog was being prepared to a trip to Caracas or Quito too…


The cabin was well kept, but the plane clearly showed its age.


While we were sorted out and OK to leave, FAs passed around offering OJ and Champagne…fancy detail.

Drinks done with, we were off to the runway.

At the time, AeroRepública (before being Copa Airlines Colombia) had the new and novel Embraers. Avianca didn't even had defined to buy either 737NGs or A320s


757s were also commonplace at the time, Deltaflot present!


The old terminal…check the difference with the present one.


The Puente Aéreo hasn't changed in these 7 years, bummer.


No IFE but the views…but there wasn't much to see.


If I'm not wrong this is Nevado del Huila, Colombia's highest Andean mountain.


We were handed breakfast…no pic (sorry, I wasn't a hardcore geek at the time)

Fastly enough we were over Ecuador


The scenery was stunning.


Arriving into Quito's old Mariscal Sucre Airport was an awesome approach was over the valley east of the city, surrounded by snow peaked mountains up to 6000m and then you dropped into Quito's valley, floating over the city's buildings.


The only bad deal about it, is that the coolest part of the flight happens so fast.


The terminal building, deserted…but for a TAME Embraer


We descended through stairs, then into a bus that left us in the migration zone. Even if smaller, and unpopular with locals, UIOs terminal was in a much better shape than BOG at the time. At the time of that trip, diplomatic relations between Colombia and Ecuador were really tense…so imagine our surprise when you hear at full volume Vallenato (Colombian typical music) being played at the hall, it came from one of the policewoman's mobile phone, the place was so empty the sound just echoed all around.

Passports asked for along with our Pasado Judicial, a document produced by the Colombian equivalent of the FBI or CIA in which you proved that you had no judicial records,they were just checked without much care, I felt a bit ripped off thinking of the ordeal that it was to acquire that piece of paper.

Bags were picked and then we were picked by the guys who had invited us, and so one of the most fun weeks in my life begun…
See more

Riding AeroGal and their old 732s was a memorable experience, and a great way for a first time into the awesome country Ecuador is.

AeroGal's product was a bit over OK, the plane was well kept, I expected it to be noisier and nastier, but unless you were an aviation geek you'd wouldn't notice it was older than AV's MDs. Don't recall how good the breakfast was, but the Champagne...better, bubbly wine, and OJ were nice touches. I recall that during the return trip to BOG, the crew was very friendly and they even help us to do a prank on our friends, we told the FA they were getting married and they handed bubbly and all for the toast!

BOG's old terminal, while it had given us many fond memories it was a dump. Although AV wasn't as big as it was now, so it didn't feel as congested as during its last days in 2012.

UIO's old terminal was way more modern, even when smaller than BOG's, it was well kept, and for our arrival proper. Don't know how confortable it would have been when the KLM MD11 or the IB A346 showed up at the same time.

Thanks for reading. Saludos!

He wrote 94 reviews about 31 airlines and 51 airports.