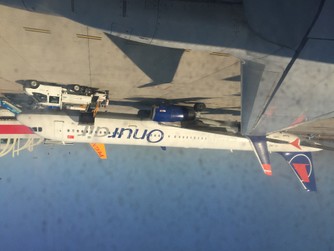 This report has been added to the FLASHBACK SERIES as this FR doesn't include much detail as my regular reports. In this series of flights, I would share reports from flights that I've flown before registering this website. Just a quick reminder that I am the same human being with "turkishflyer1" on flyertalk so the reports posted can be the same as posted there.

Was quite easy and simple but the bad thing was the seats were assigned to you by the system. After a 5 minute wait at the enterance security checkpoint as in Turkey you are screened twice at airports. One for entering the airport and one for your flight. Quick and fastly made. It was interesting that XQ had special check-in desks for families and for passengers who needed assistance. No other airline has this service in domestic routes. No lounge for my first report on flight-report.com

TC-SUV was going to operate today's flight to ADB. The boarding was made at gate 208B and on time. The seat was comfortable and the legroom was OK for a very short flight on a charter airline.

Some plane spotting. Sorry for the bad photo quality.

Today's XQ flight to AYT was going to be operated by Onurair. TC-JDL getting ready for his retirement TC-DCG getting ready for takeoff. Takeoff was a little bit delayed because of the air traffic but it wasn't a delay. There was no free meal. I could have ordered my meal online but I didn't and the cafe prices were very expensive. No monitors on board, only a magazine and a duty free catalogue for international flights. Landing 20 minutes late of scheduled time. Airport from the air. We were transferred to the terminal by bus. SunExpress is a good choice for short destinations in Turkey and it has low fares. This flight had the half fare of TK at that hour and SunExpress is a joint venture of TK & LH.

Once again sorry for the bad photo quality and thanks for reading.

The contributors of Flight-Report published 3 reviews of 3 airlines on the route Istanbul (SAW) → İzmir (ADB).

The airline with the best average rating is Anadolu Jet with 6.9/10.