#39 out of 71 Airlines A minimum of 10 flight-reports within the past two years is required to appear in the rankings. 131 reviews

By jetcitytraveller 615
Published on 3rd December 2018

Welcome to my Flight-Report, for Delta Connection flight 3719 between Nashville and Minneapolis. I was rebooked onto this flight, connecting onto a 757-300 to Seattle after my original itinerary from Nashville to Seattle via Atlanta went haywire due to my Nashville-Atlanta plane going tech. The reports from my other flights in this trip are here: https://flight-report.com/en/report/36892/delta-air-lines-dl2874-seattle-sea-nashville-bna
https://flight-report.com/en/report/36970/delta-air-lines-dl2939-nashville-bna-nashville-bna

As I mentioned before, my plane from Nashville to Atlanta had a maintenance issue that created a delay so long that I wouldn't have made my connection. It was a busy travel day, being a few days before Thanksgiving, so while I was lucky to even get seats on these flights, I had to wait for 6 hours in the airport which got boring quick. After I got off my previous flight and informed family at home about my flight changes, I went to a gate to get my boarding passes printed out. Amazingly, even though this was a completely full flight, I got seat 10D, a window seat in the very first row of economy. For my other flight, I was to get my seat assignment at the gate in Minneapolis. During my wait I alternated between doing schoolwork, walking around the airport, and plane-spotting. As with my previous reports, some plane spotting photos are in the bonus section below.
Bonus : Click here displayhide 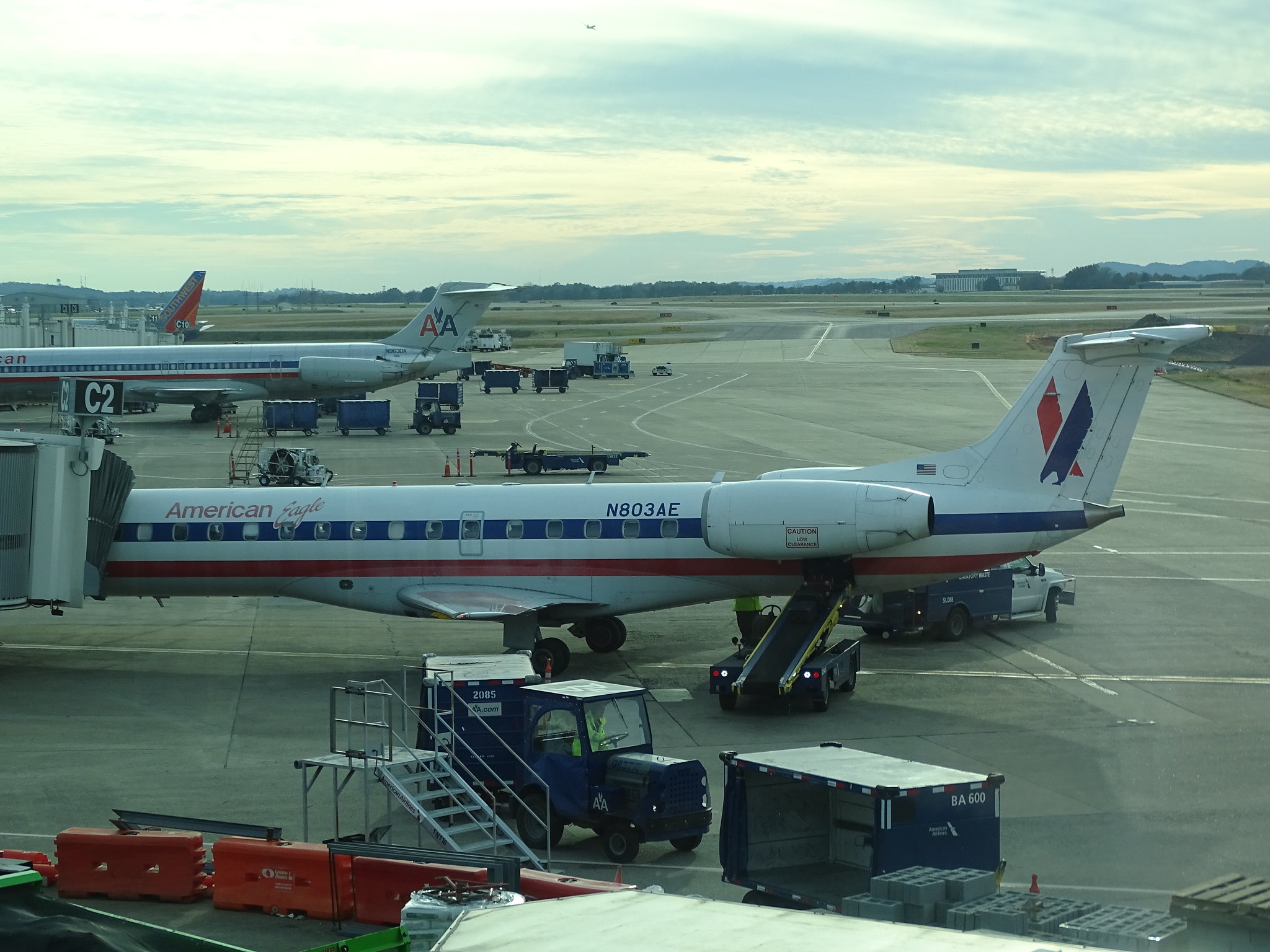 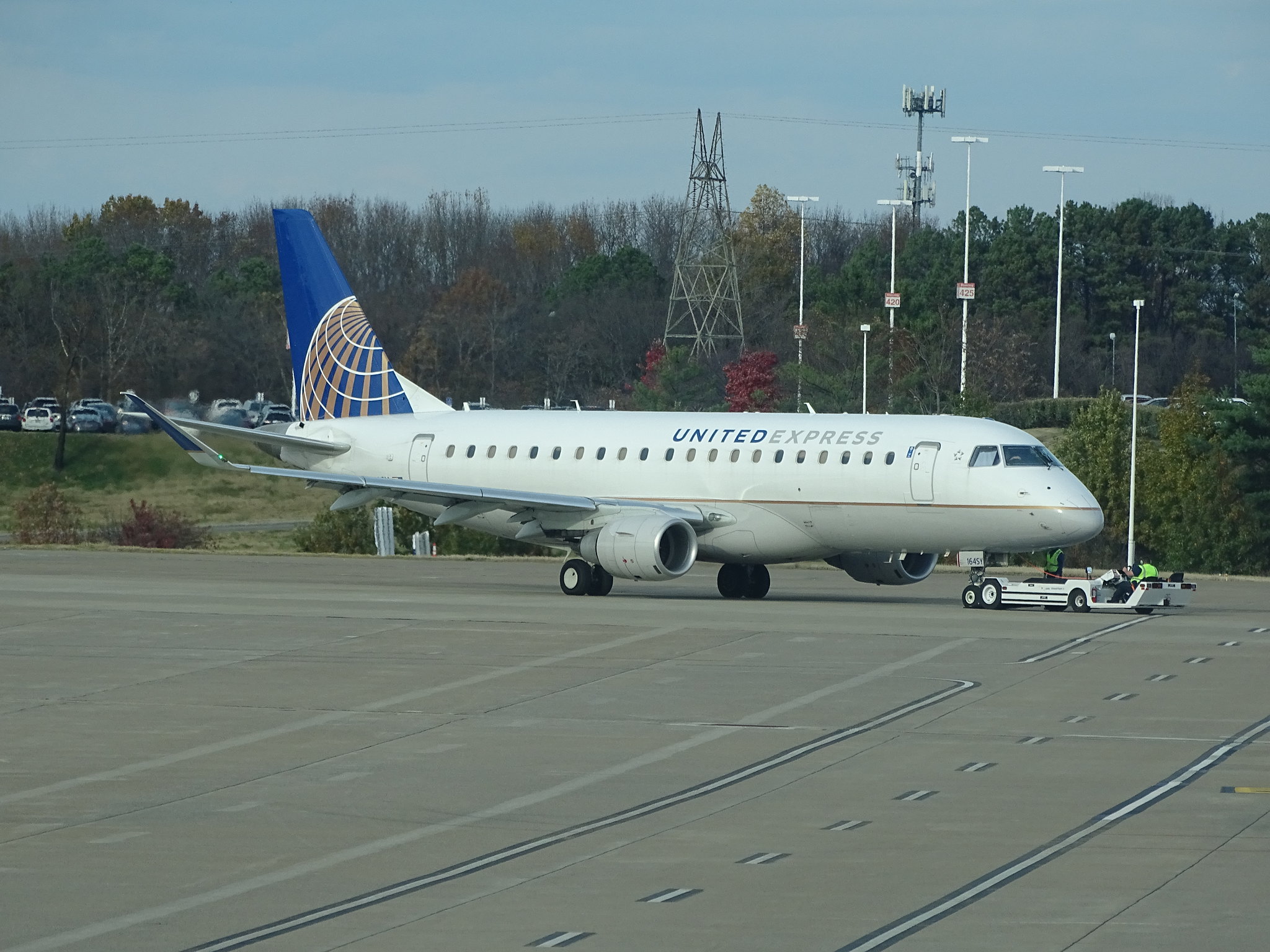 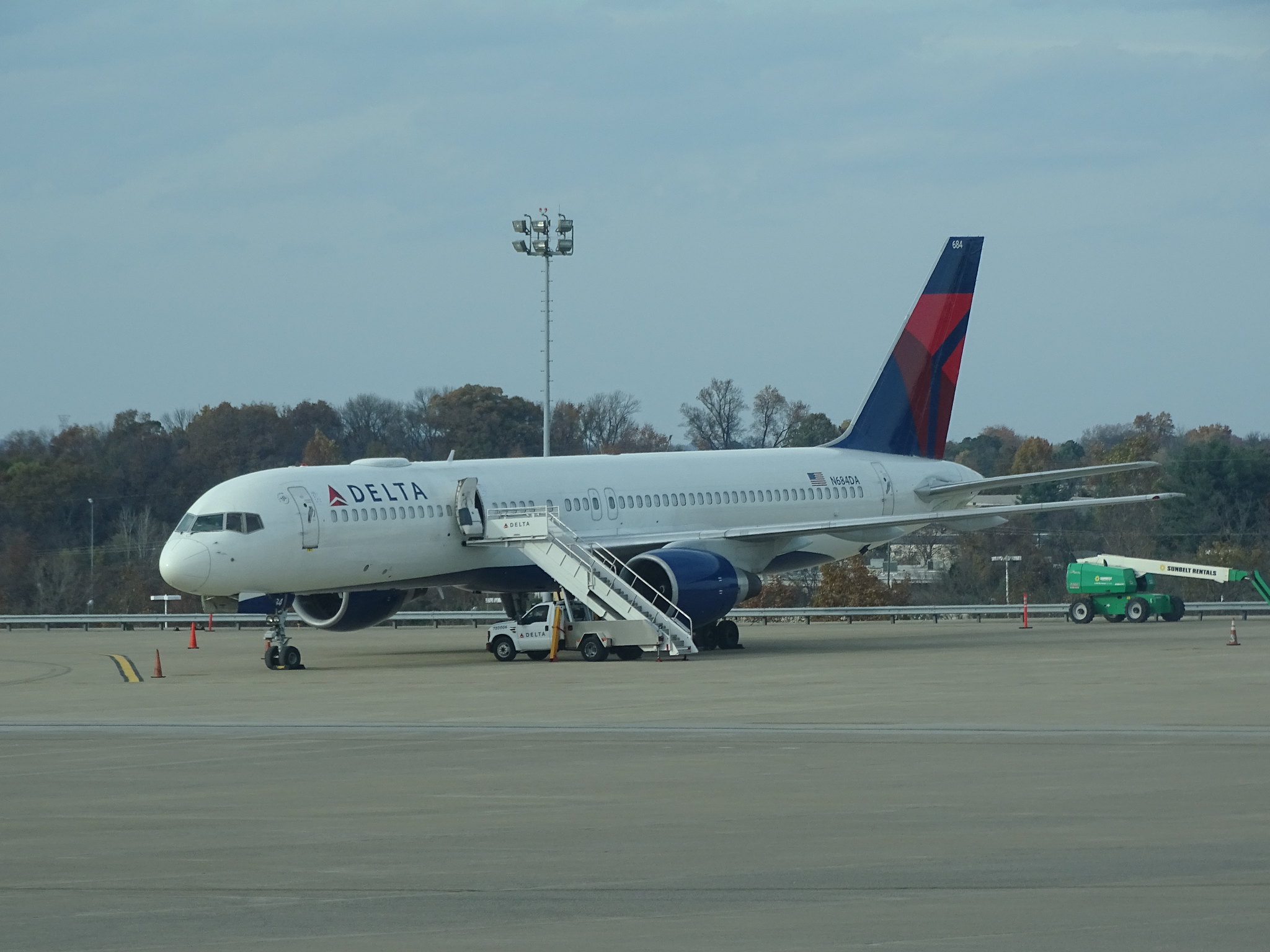 The 757 that I was supposed to take to Atlanta, getting some maintenance work done on it. 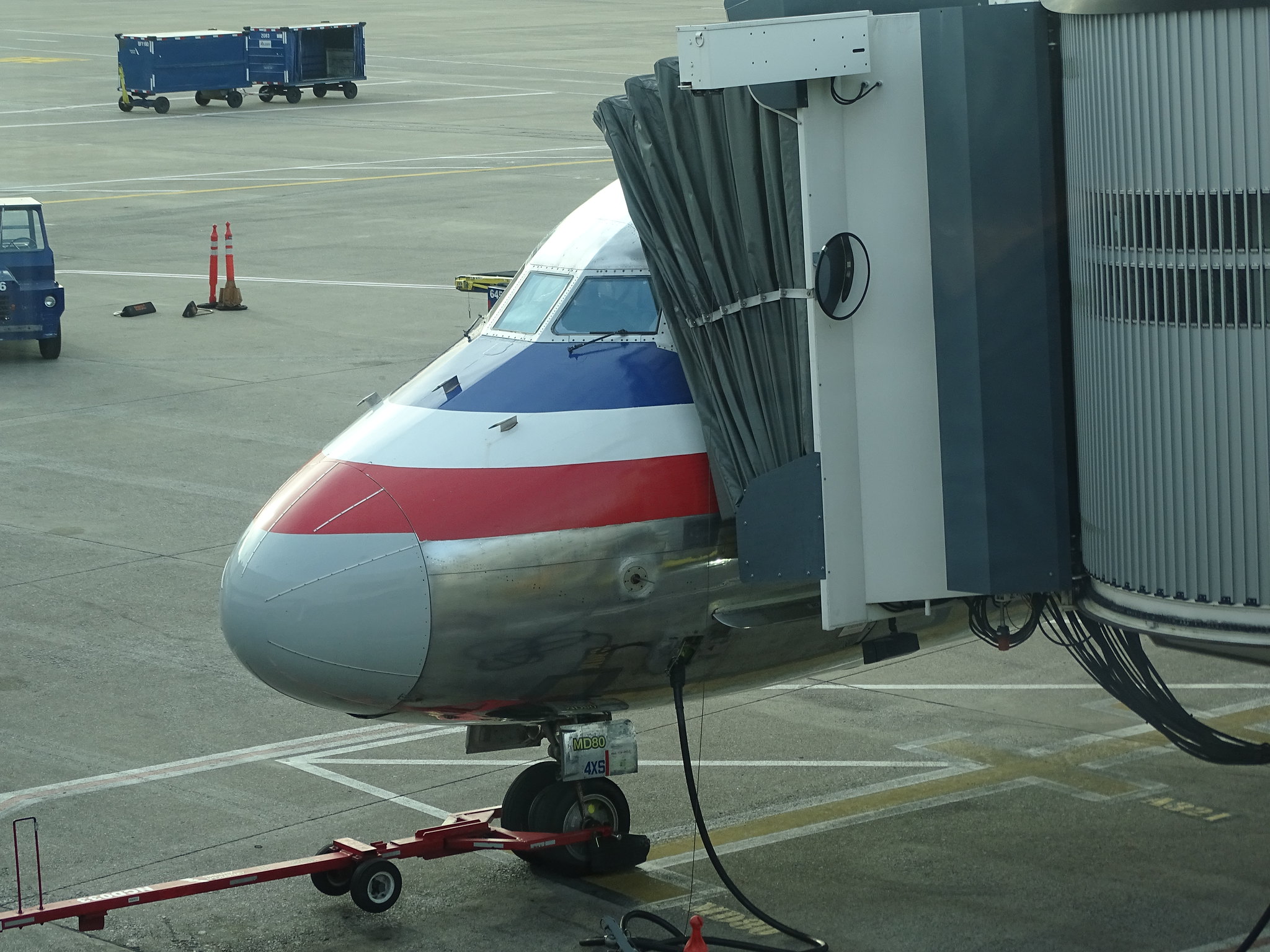 American MD-80 (sorry, it was the best angle I could get) going to Dallas/Fort Worth. 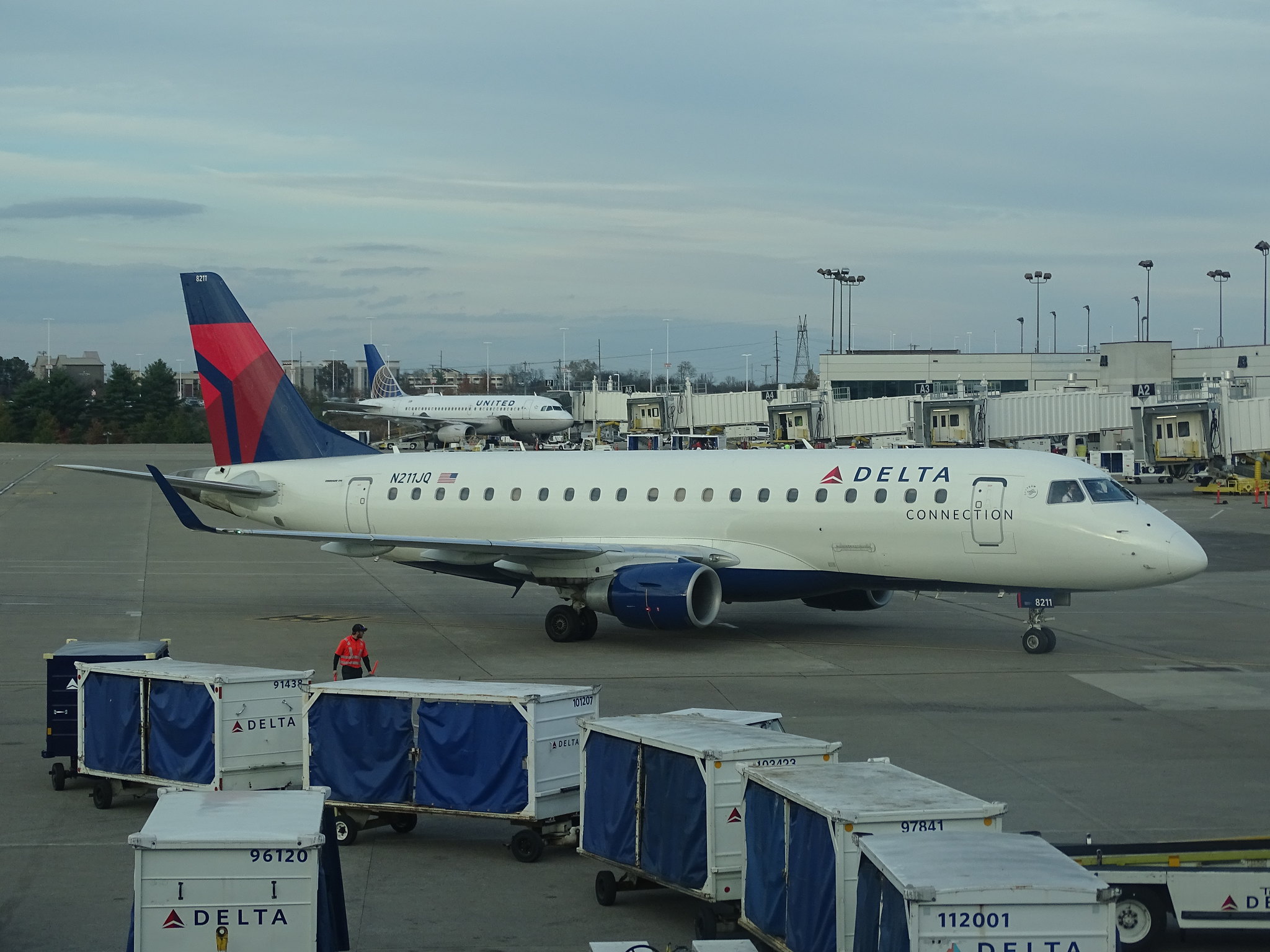 Another Delta E-175 at the gate next to my Minneapolis flight arriving from LaGuardia. 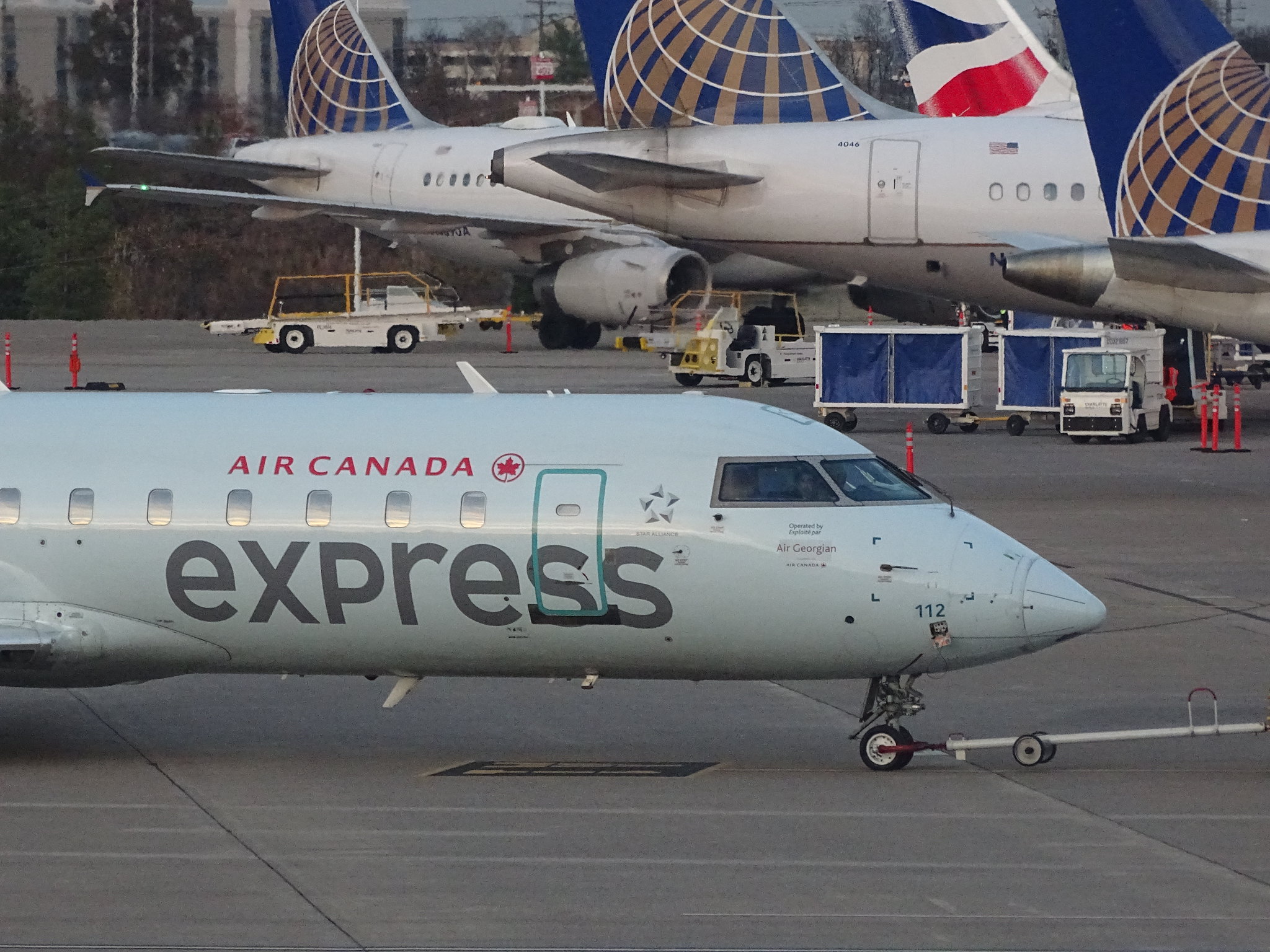 Air Canada Express CRJ-200 being pushed back for a flight to Toronto.

I'll just skip over the boring waiting part and get straight to the flight from here. My plane left Minneapolis about an hour late on its inbound flight, so a 20 minute delay was posted, but I wasn't too terribly concerned since airlines pad their flight times anyways. At about 4:15 pm, my plane arrived at the gate. 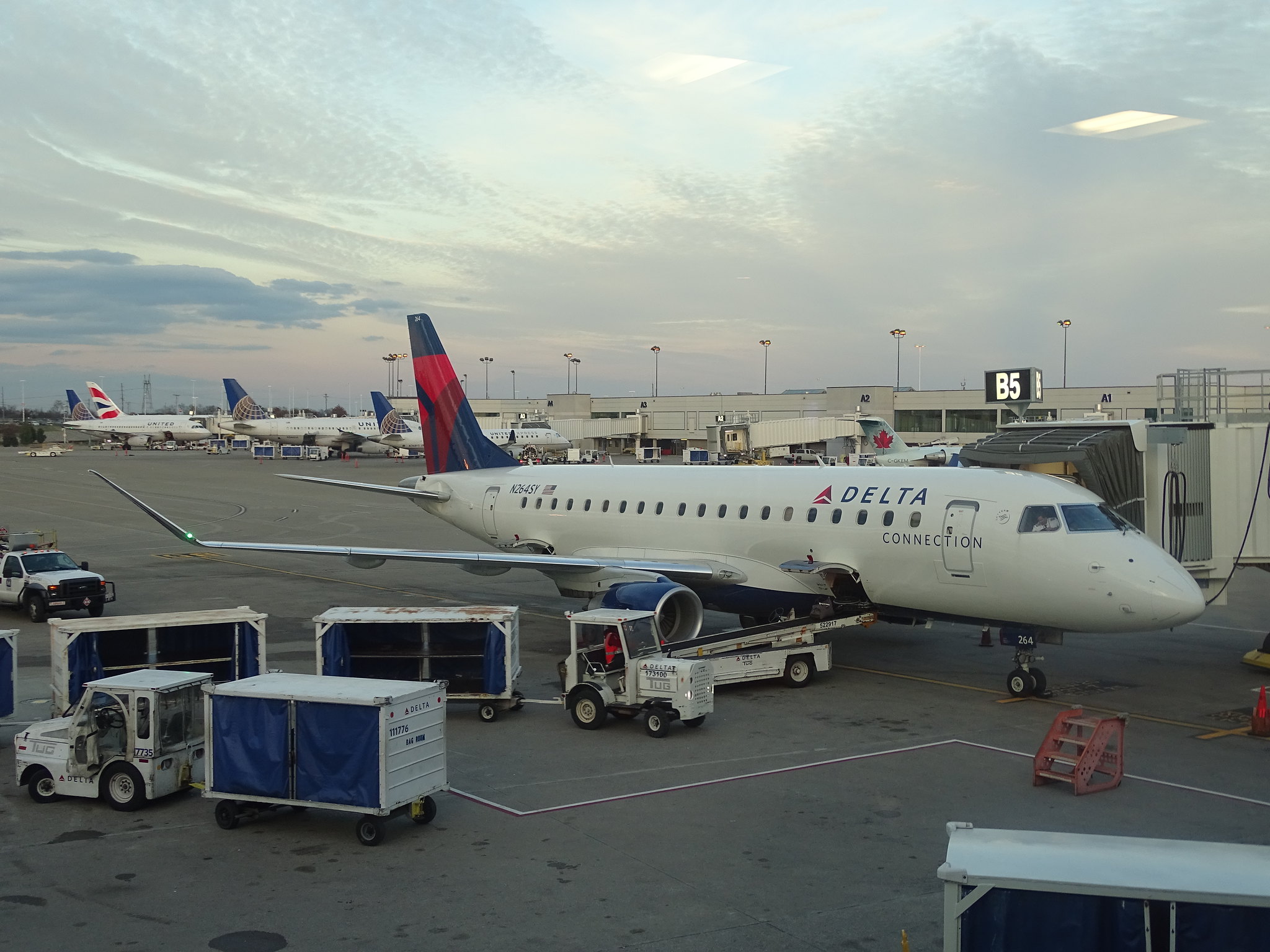 N264SY, a 0.7 year old Embraer 175 operated by Skywest Airlines.
They turned around the airplane rather quickly, and announced that everyone's tighter connections in Minneapolis should be fine. Boarding was announced shortly thereafter, at around 4:35.
A closer view of the plane. 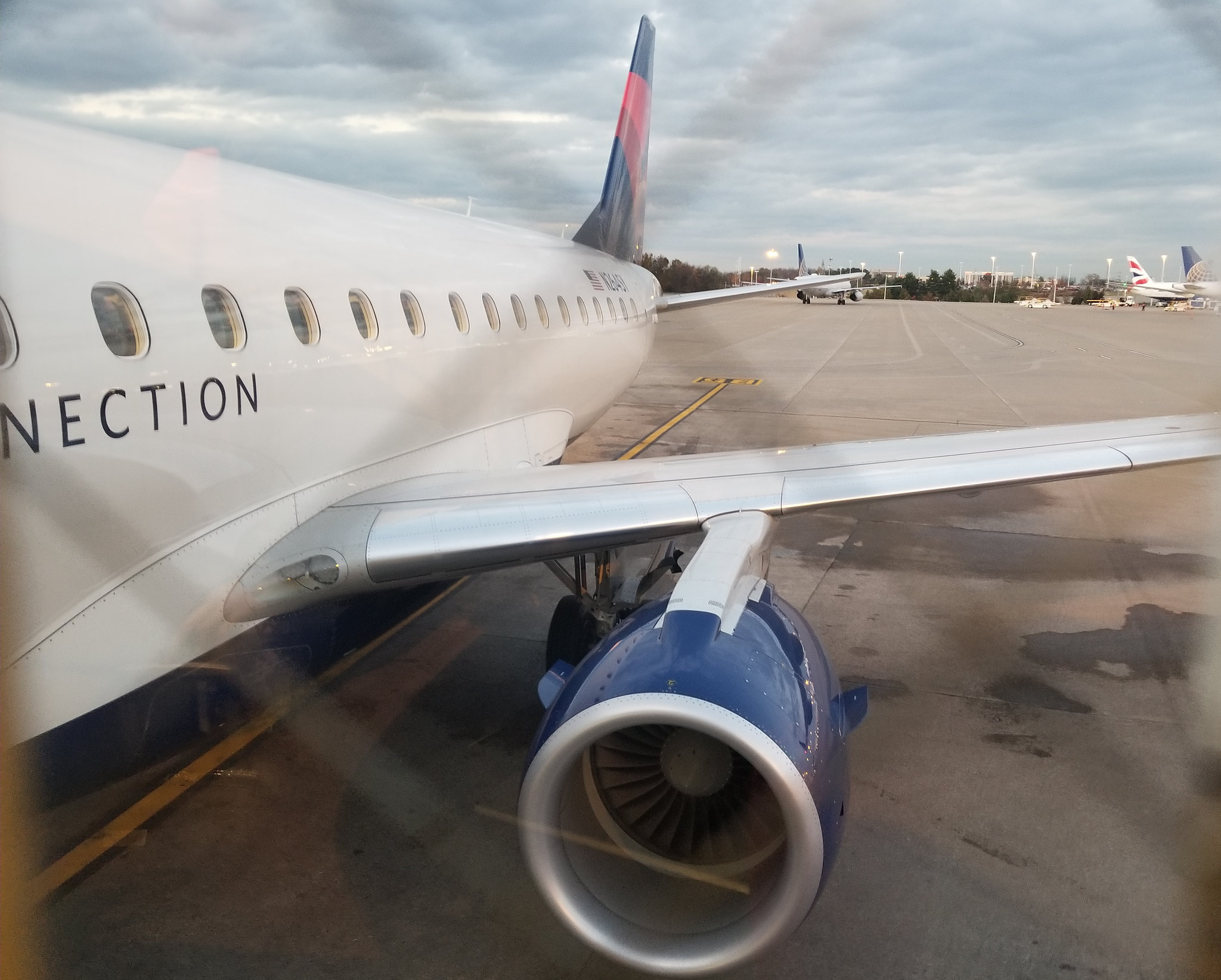 There was a bit of a holdup in the aisle thanks to the person in front of me taking 5 minutes to store a bag in the overhead that was too big, but other than that boarding was quick. I took my seat in row 10, over the wing. 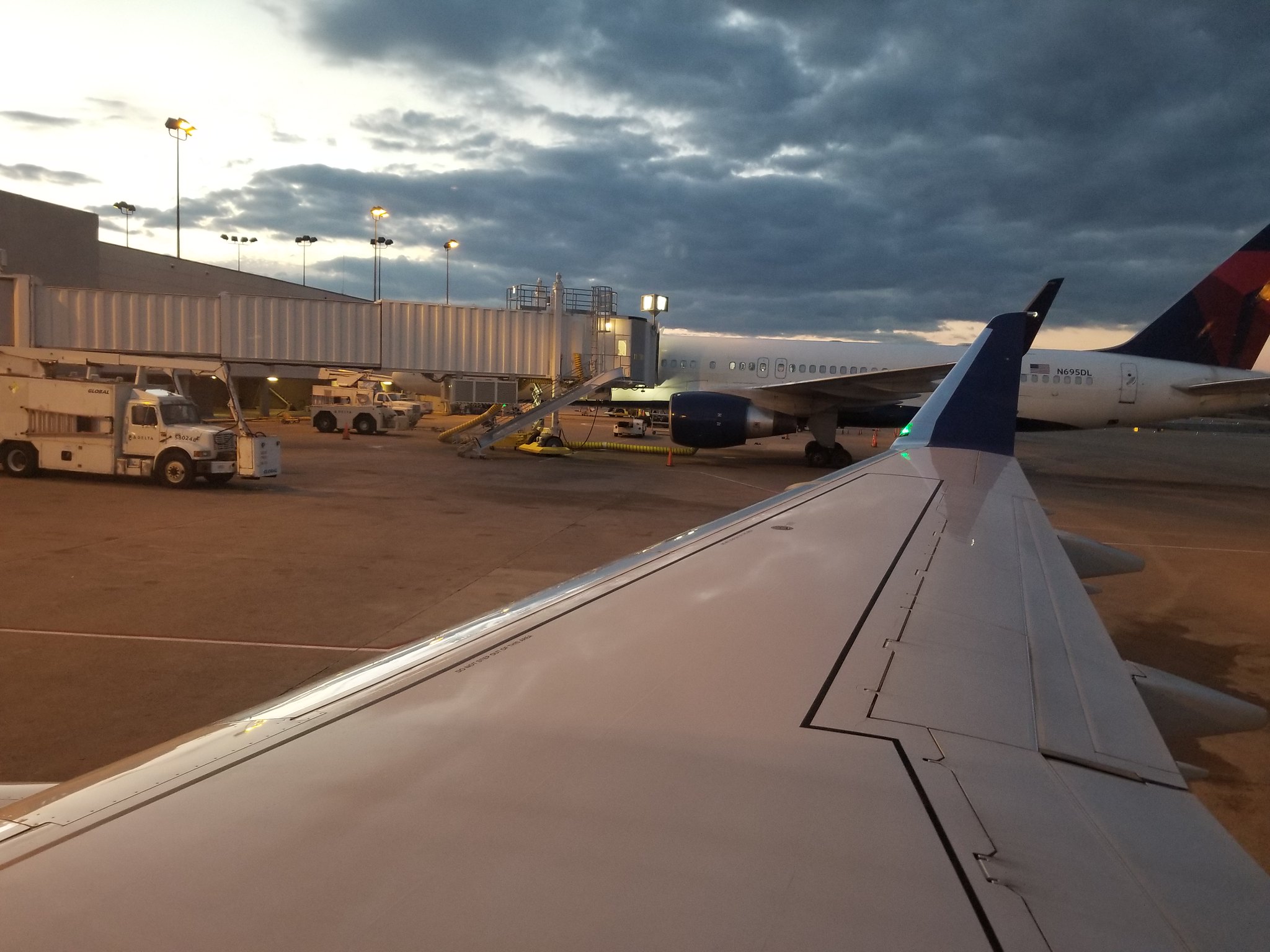 This was my first time flying on an E-Jet, and I was very impressed with it. The seats were comfortable and wide, the windows were huge although they were slightly misaligned, and the overhead bins were decently-sized for a regional jet.
The photo doesn't show it well, but legroom was also good, although that may be because the plane is in a special 70-seat configuration due to regional airline scope clauses. 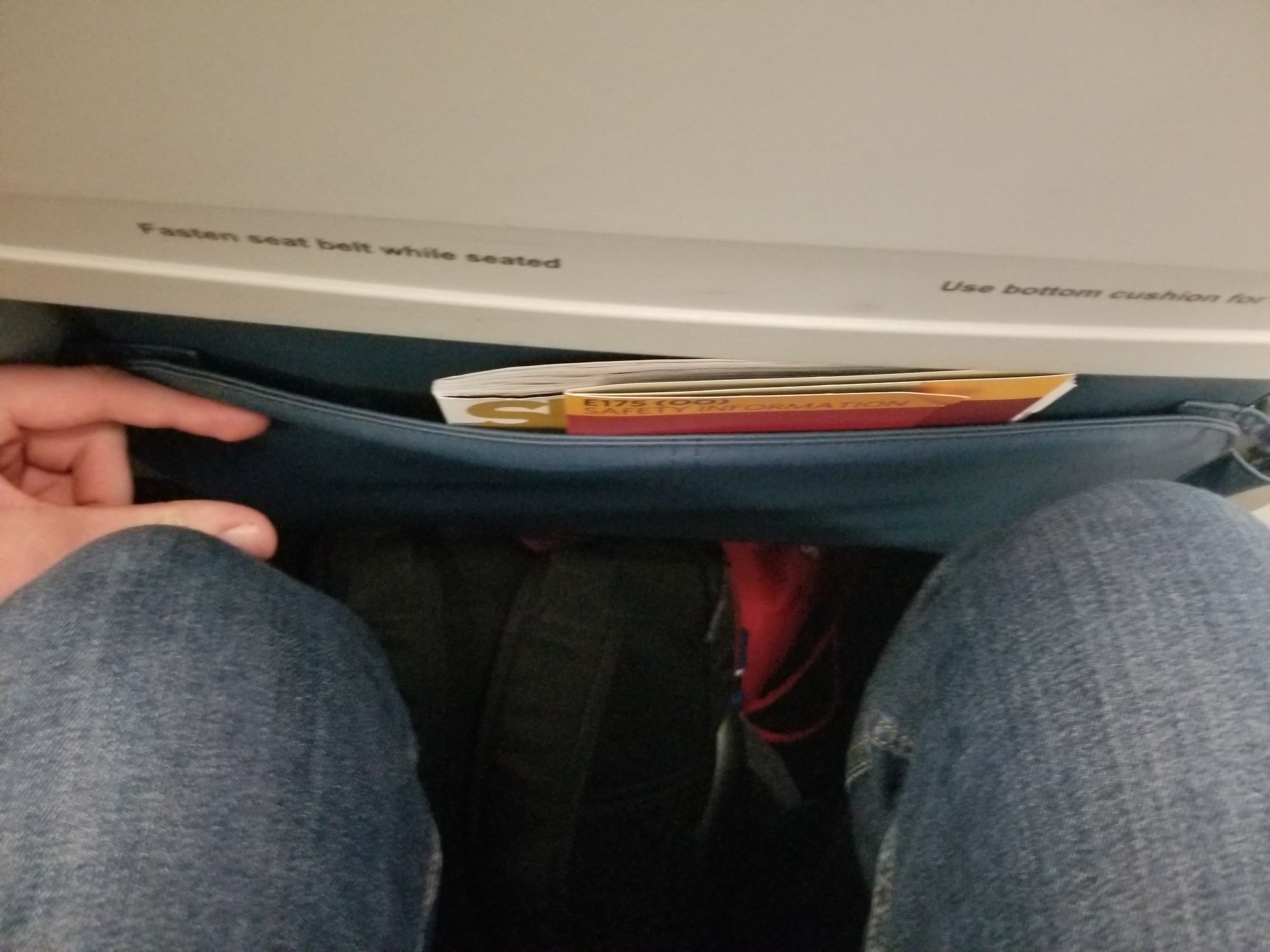 My view of the cabin after boarding was finished but before pushback. Since this is a new plane, the cabin was basically pristine. 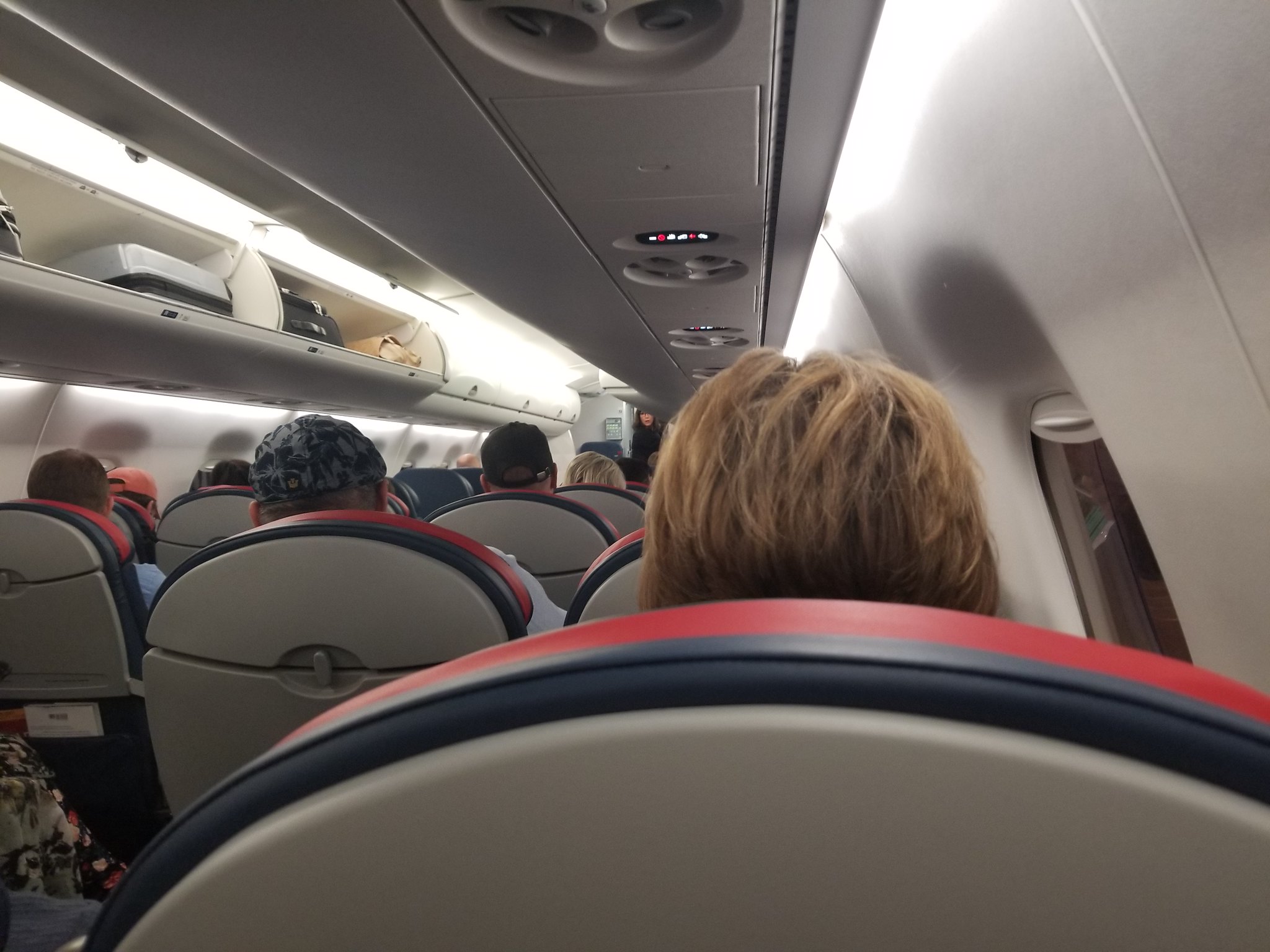 After everything was said and done, we pushed back a few minutes before 5 pm. The Chicago-based crew introduced themselves, then did a manual safety demonstration. The taxi time was short, and we only had to wait for a Delta 757-200 bound for Atlanta to depart before it was our turn.
Here's a video of our departure. It's not the best quality, but hey, it's better than nothing.

Our climb was fairly turbulent but quick. Once the streaming IFE was turned on, I started to explore it and was satisfied with what it had.
The movie/TV show library looked impressive, although I chose to read a book during the flight instead.

There was also a flight tracker, arrivals info, and aircraft data.

30 minutes or so into the flight, the attendants came through with beverage and snack services. The only snack choice was a KIND bar, and I had a Sprite to drink. The flight attendants were friendly yet professional, having brief conversations with passengers as they were serving them. 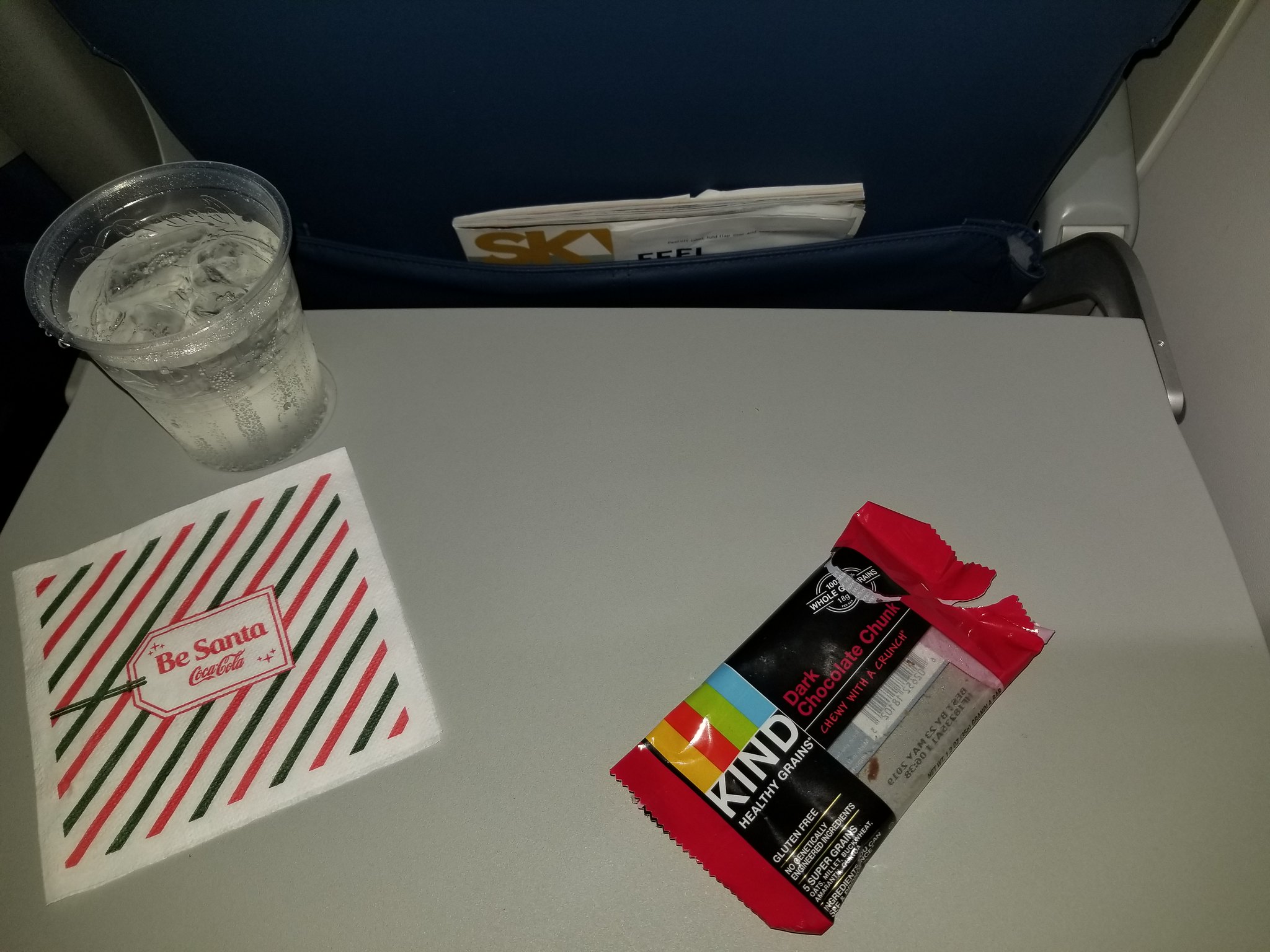 After that, the flight was mostly uneventful, save for some turbulence around Iowa. I visited the aft lav before descent, and it was clean and served its purpose. 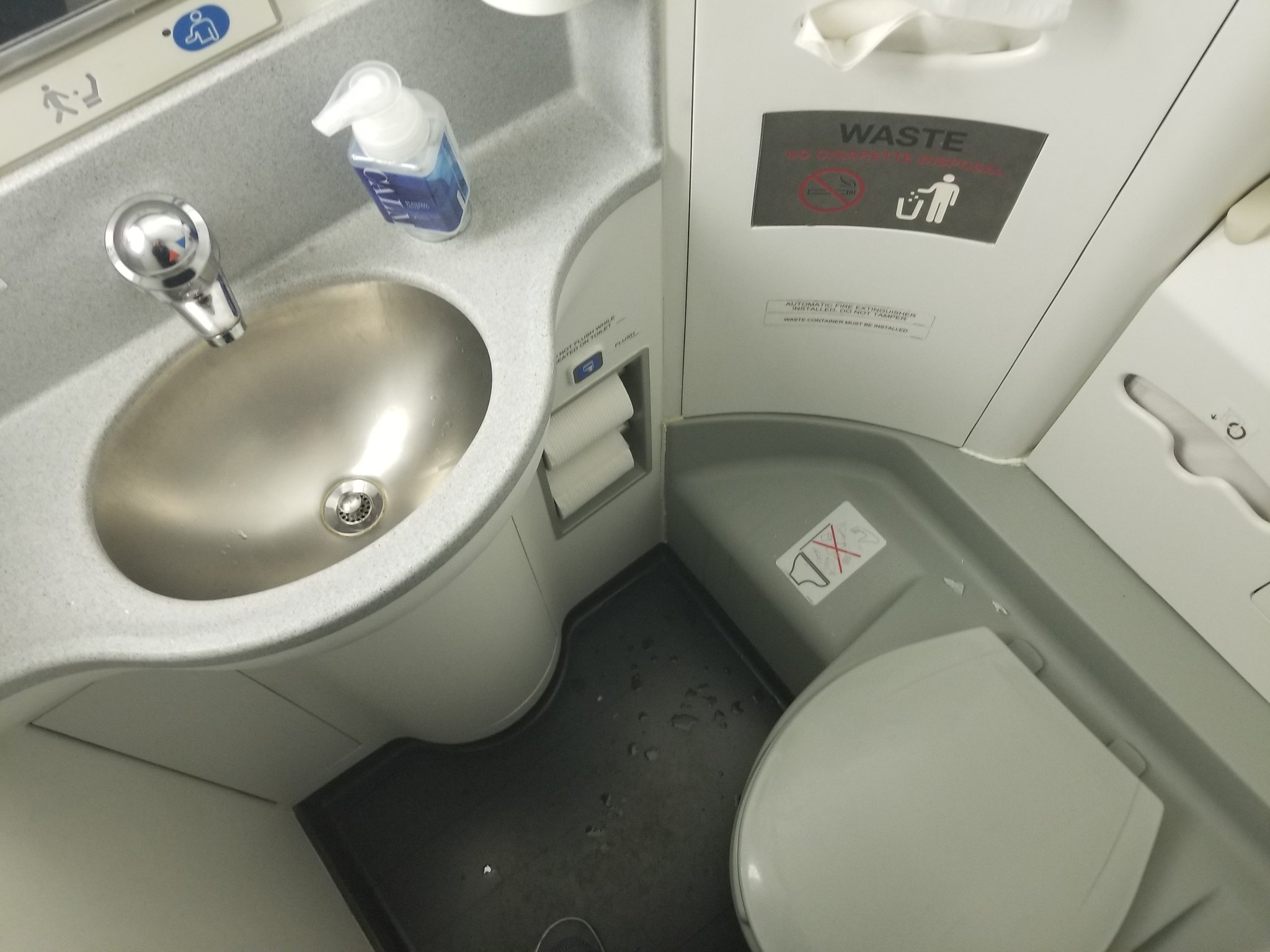 A view of the entire economy cabin. 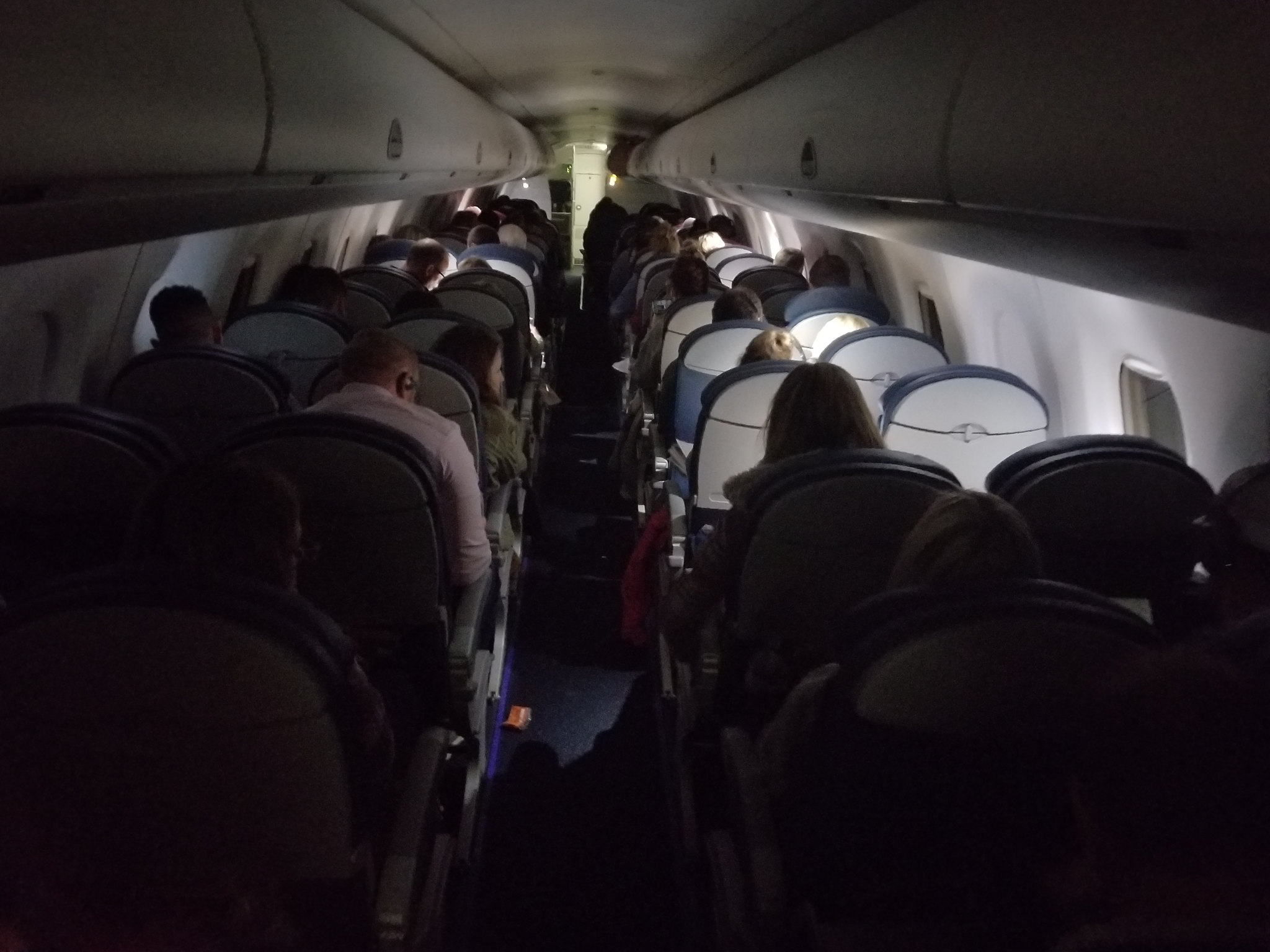 Descent was uneventful too, and we made a smooth touchdown in chilly Minneapolis (26 F, -3 C). Just like with the takeoff, a YouTube video of our landing is below.

Although it was dark so photography was difficult, we passed a good number of MD-90 and 717 aircraft on our taxi to the gate, which was interesting given how rare they are in other parts of the world. 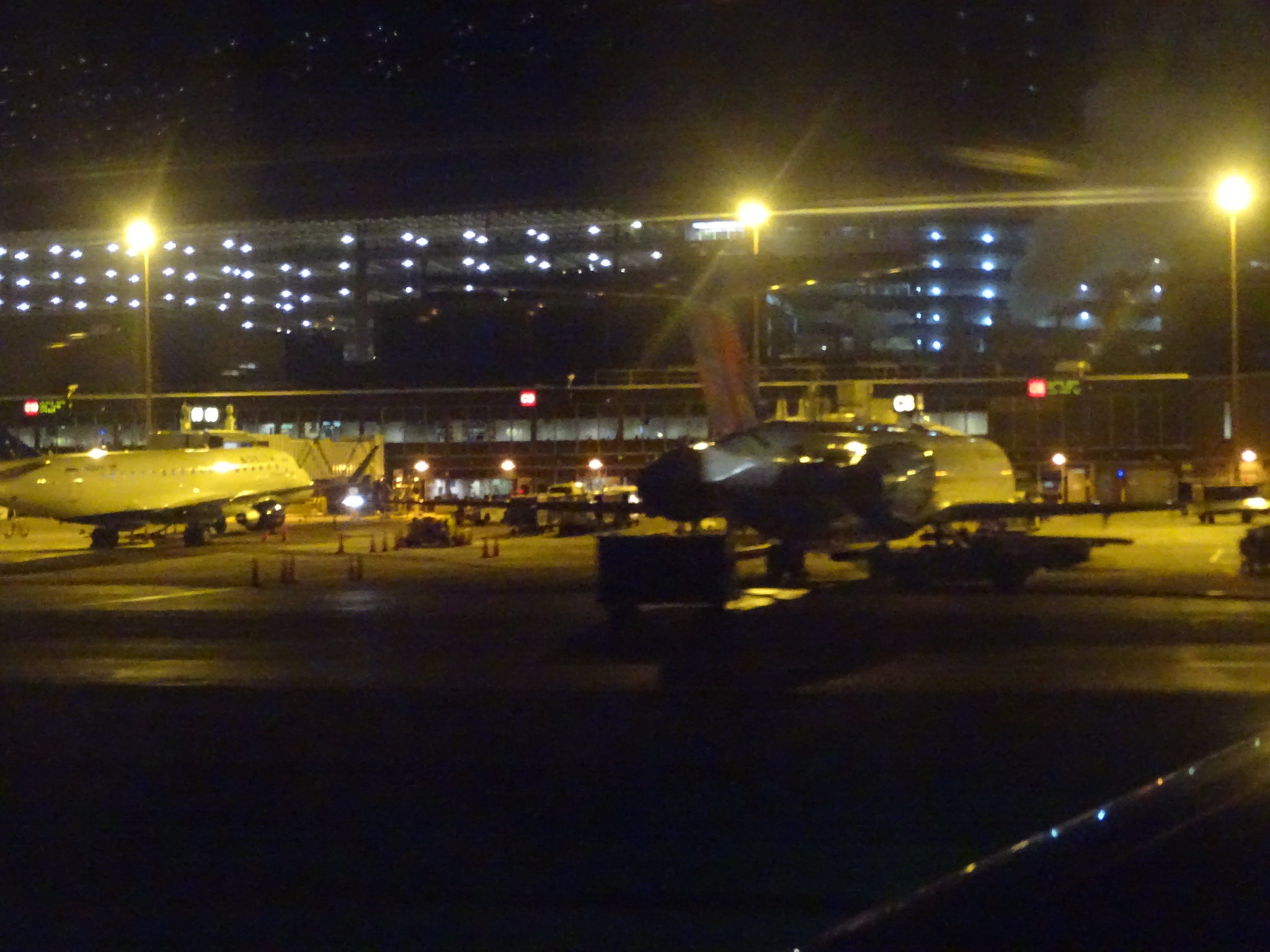 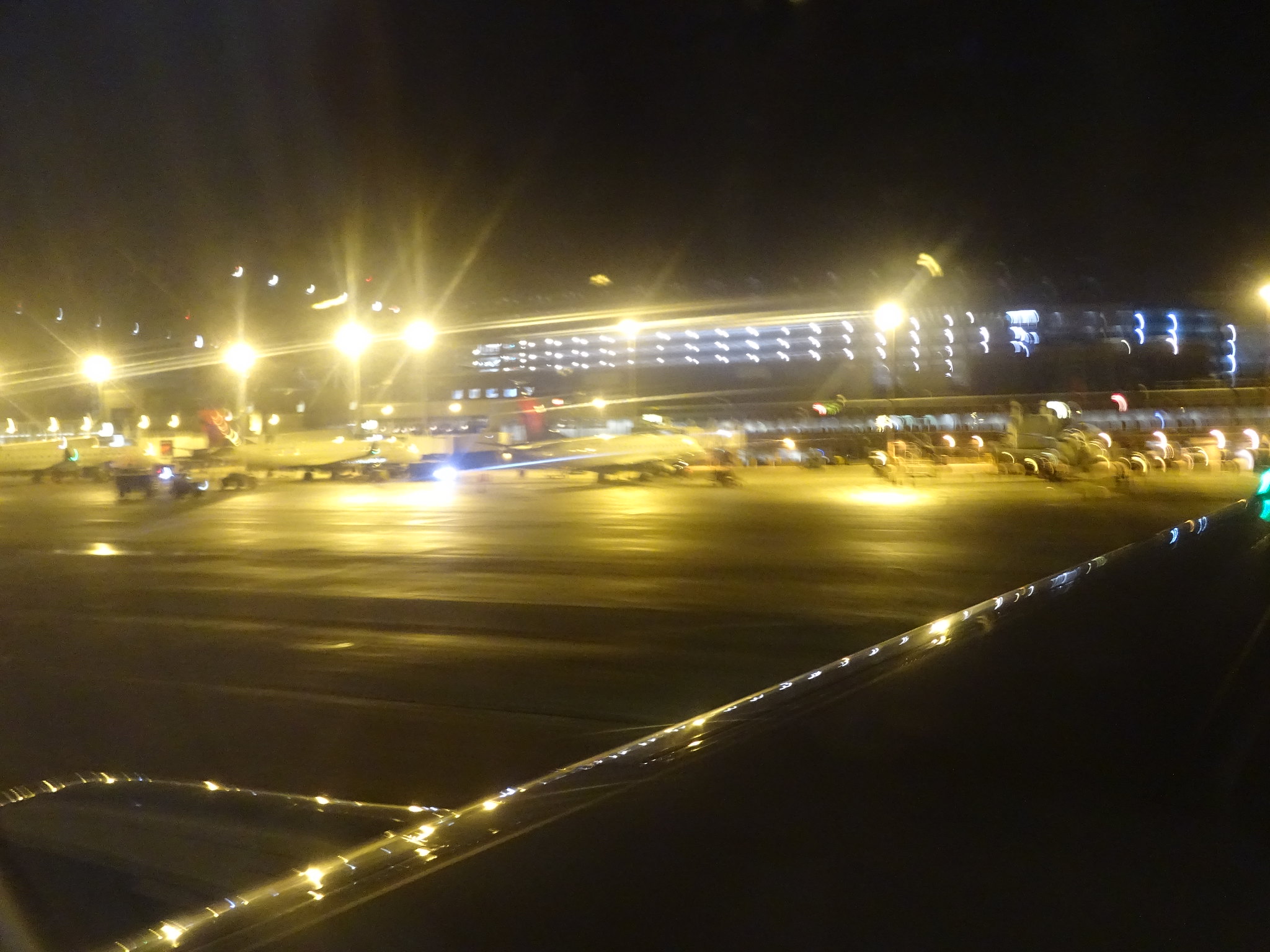 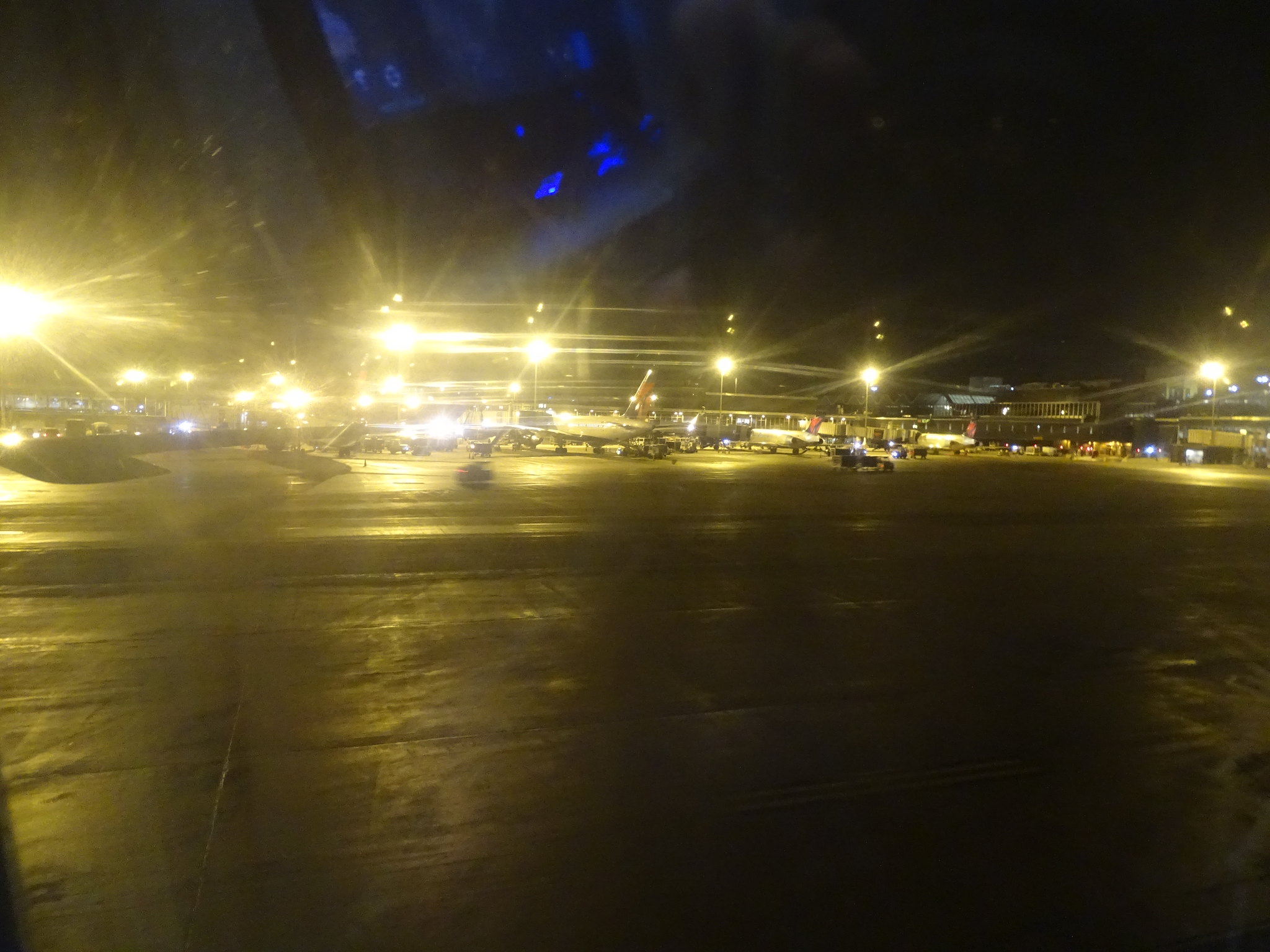 We docked at gate C13 exactly on time at 6:54 pm. For the sake of completeness, here's a blurry shot of the first class cabin I took while deplaning. 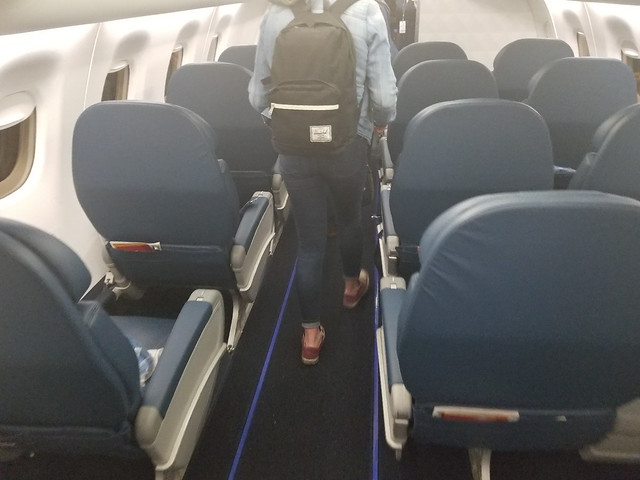 Since I had a tight connection in Minneapolis, I didn't get a shot of N264SY at the gate, but it was heading to Chicago O'Hare after this. In the gate area, I met up with my grandparents and started making our way to the gate for our next flight in concourse F, which was quite a walk.
Here's the FR24 stats for this flight.

Overall, I really liked this Delta Connection flight. The airplane itself was nice, with passenger features that definitely aren't reminiscent of typical regional jets. Although the slight delay was annoying, it was due to weather so it wasn't controllable, and besides, we arrived on time anyways. The crew was nice too, and service was adequate for this short-haul flight. I wouldn't hesitate to fly on a Delta E-175 again, and I'd gladly recommend it to anyone.