#28 out of 87 Airlines A minimum of 10 flight-reports within the past two years is required to appear in the rankings. 680 reviews

By jetcitytraveller 561
Published on 14th December 2018

I deplaned in Minneapolis at gate C13 about 7:10, with 40 minutes to make my connecting flight departing from gate F10, which was not an easy feat since I was traveling with two seniors. If you don't happen to know MSP airport very well, just know that it's quite a walk, being about halfway across the airport. I'd heard that MSP has courtesy golf carts, but I hadn't found any, so I started walking.
I was in a hurry, so this was the only photo I got of their terminal. It's aesthetically nice and spacious, with lots of amenities, but it has a confusing layout that isn't ideal for tight connections. 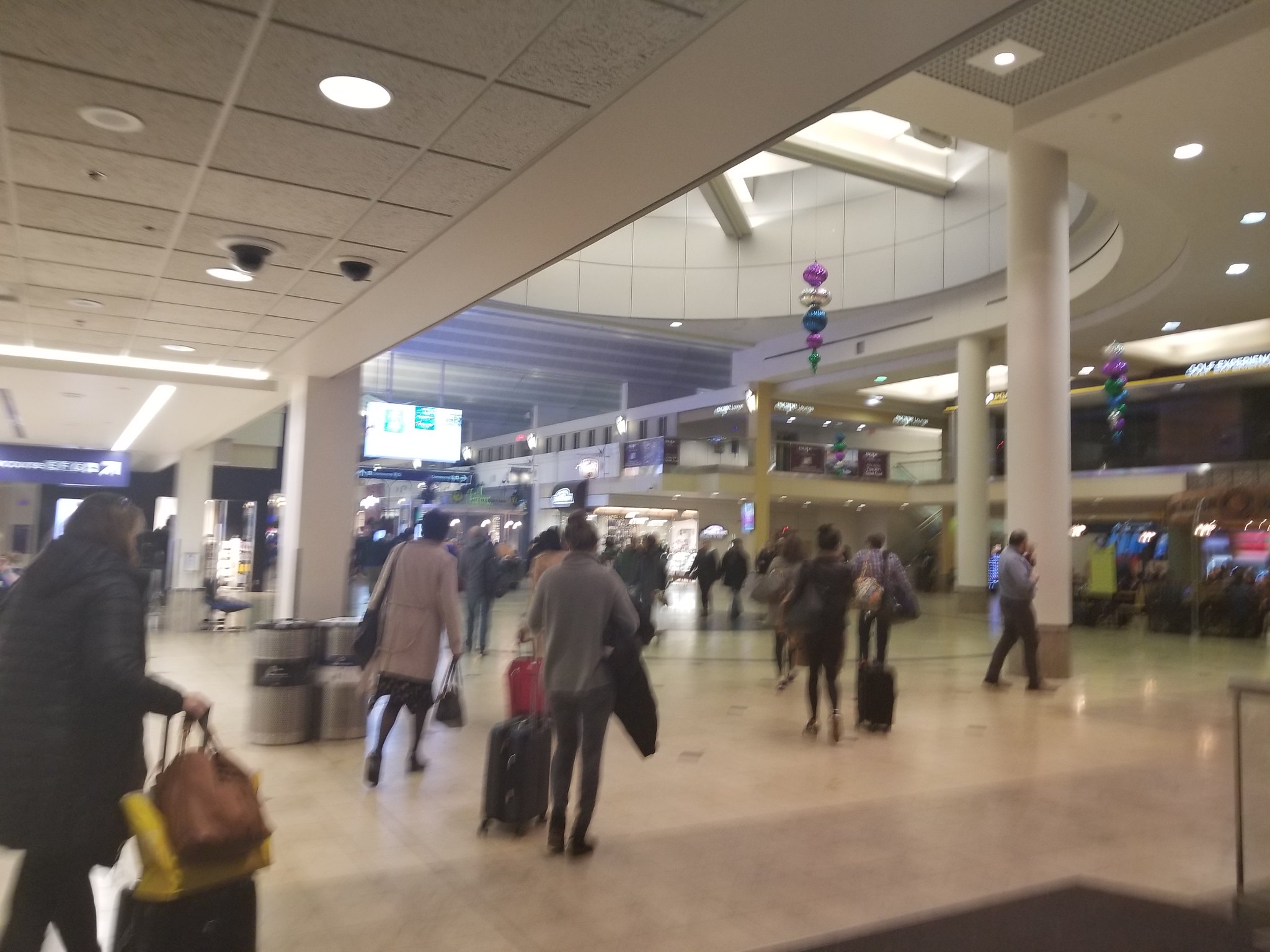 They had a tram, which I rode to the end of its line at the D gates, then I walked over to my gate, where they were pre-boarding. My grandparents stopped at the restroom, while I went to the gate agent to get our seat assignments, because they hadn't been assigned due to earlier events. Lo and behold, we got seats in the last row. On a completely full 757-300. *wince* Don't get me wrong, I'm glad that I got on the flight in the first place, but I was grateful that I wasn't making another tight connection in Seattle that evening, because I wouldn't have made it.

Anyways, I boarded in zone 1, right before general boarding. I hadn't gotten a chance to photograph the aircraft from the terminal, but I got a shot of it from the jetway. The aircraft tonight was N585NW, and it is 16.1 years old, spending the first 7 years of its life with Northwest Airlines (as the registration suggests) before being transferred to Delta in 2009. 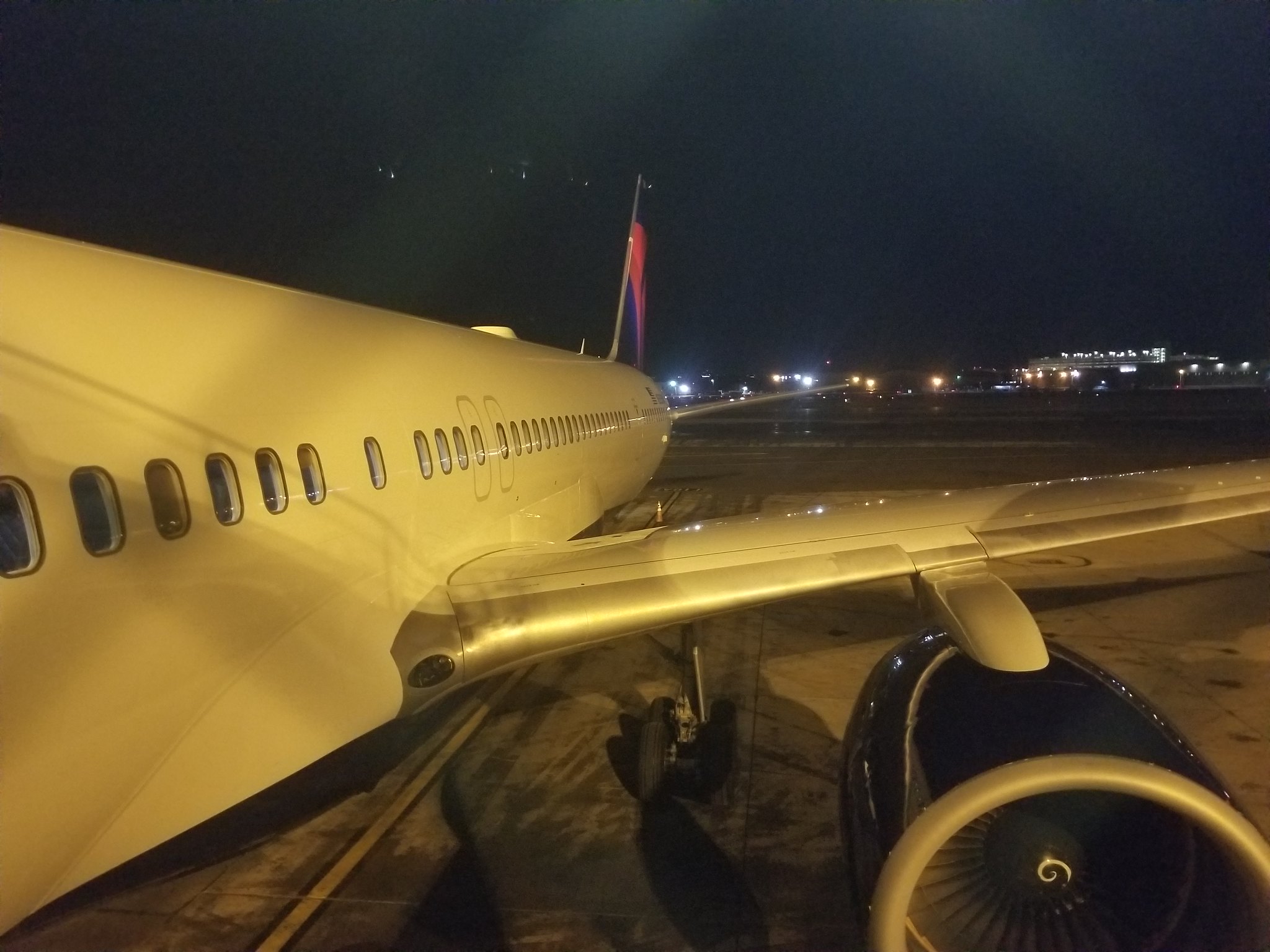 Boarding was through door L2, as is the norm with Boeing 757 aircraft. There was a monitor showing the time to departure in the jetway, which I found interesting. 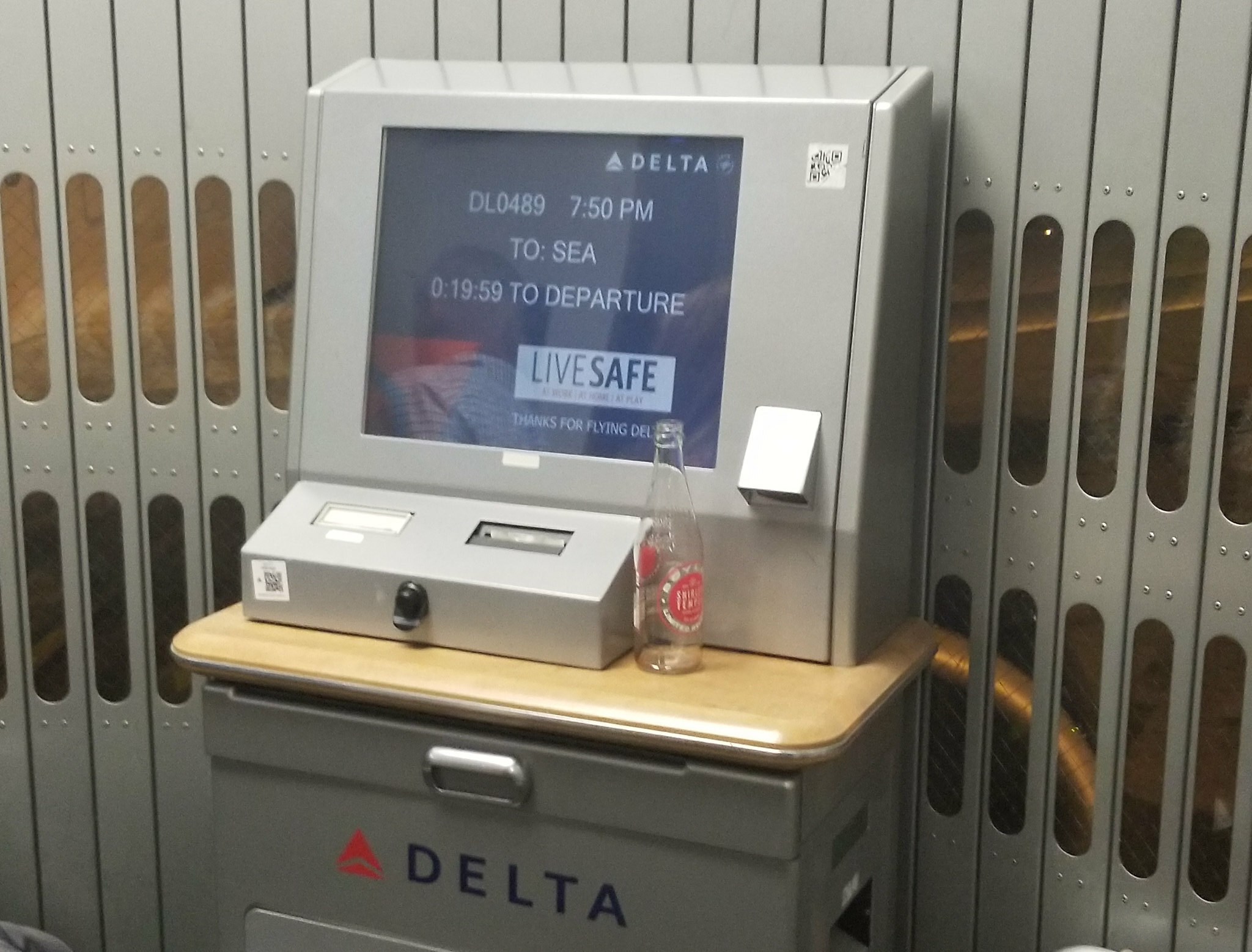 The coach cabin was nice; it was in two sections. The first was a very long stretch of 26 rows, and a mini-cabin of 9 rows in the very back, separated by a set of lavatories and exit doors. (Thanks, SeatGuru!) 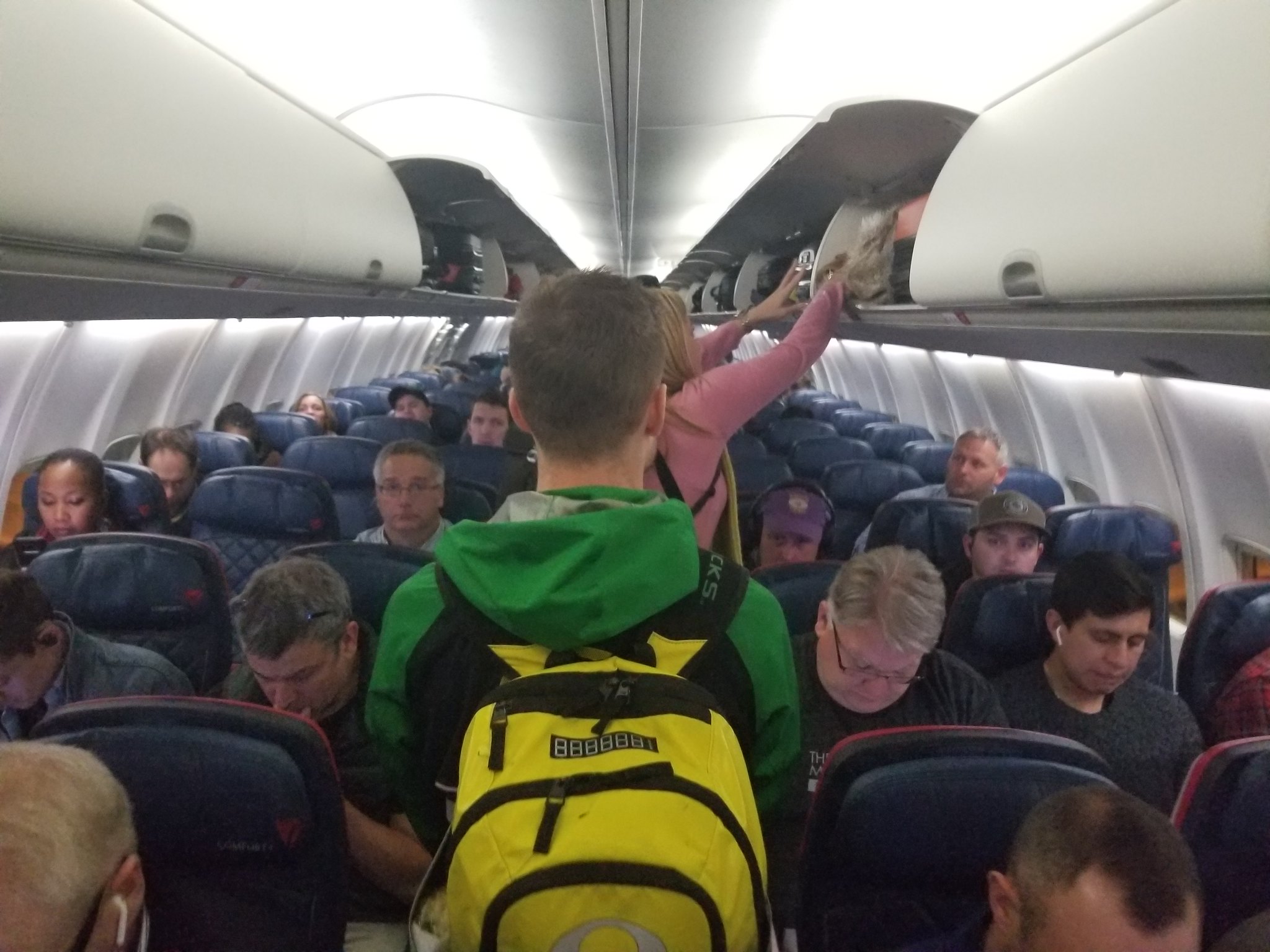 Yup, it's a long walk to the back. 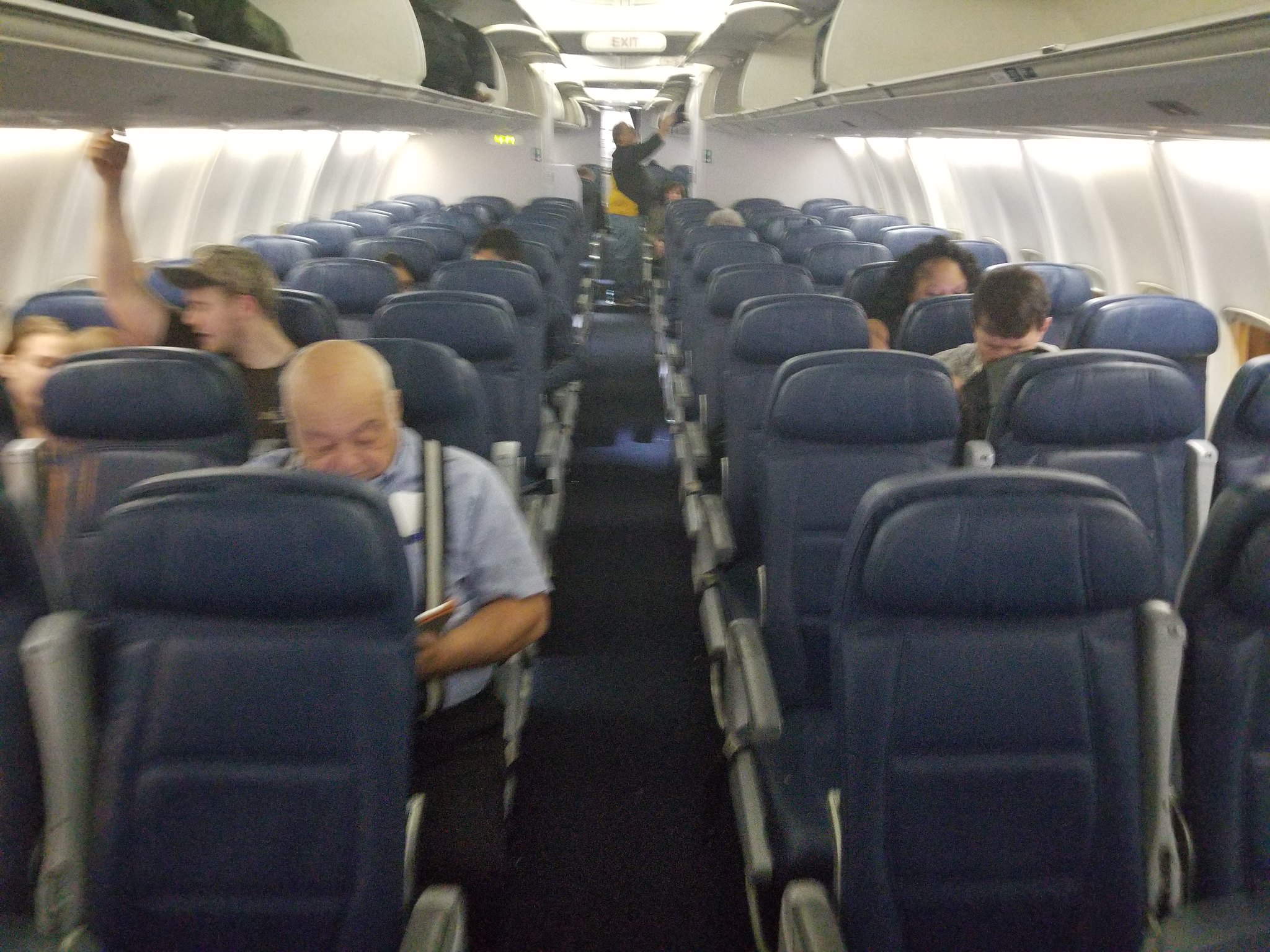 Looking forward from where I was seated. 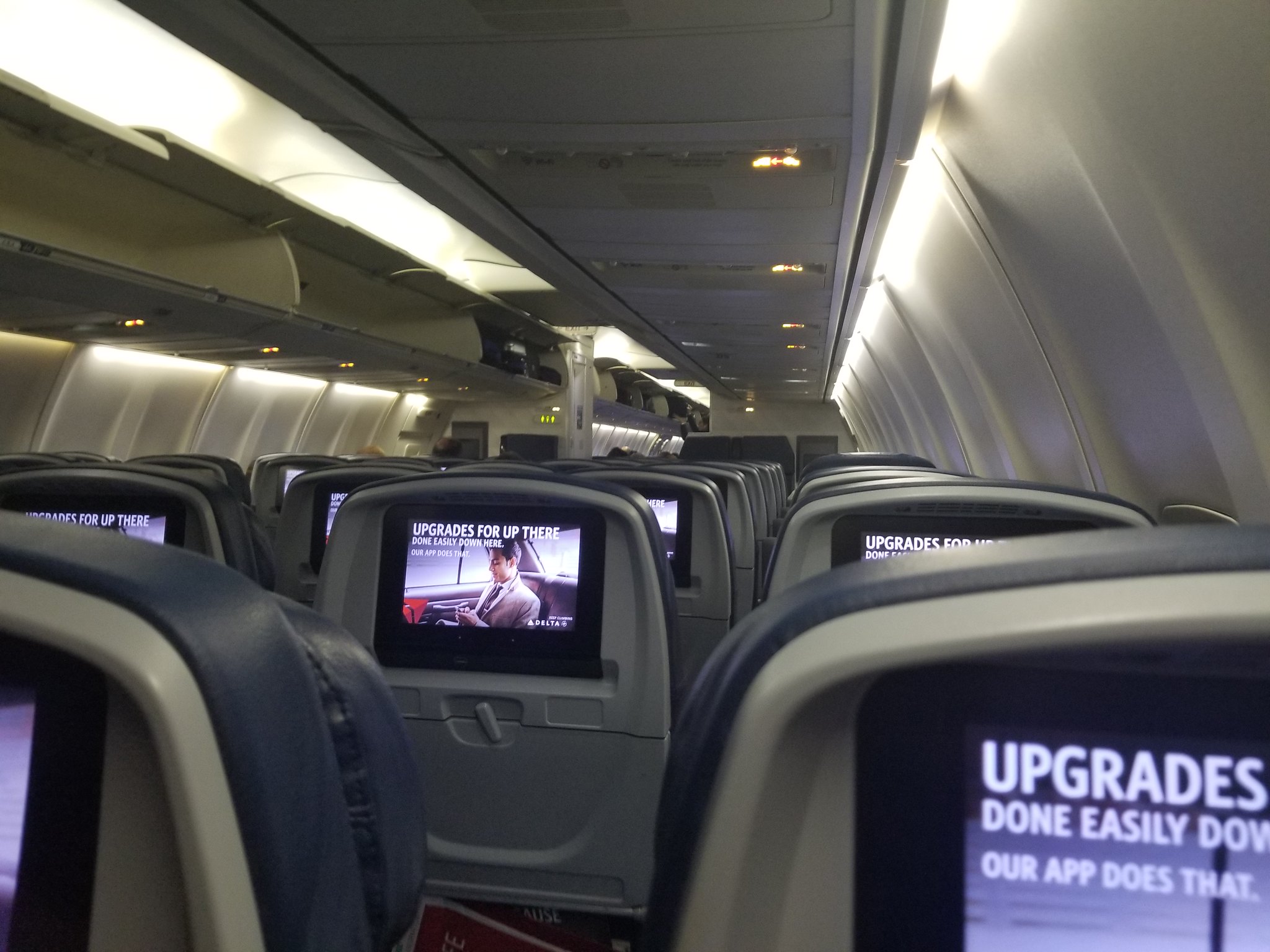 The cabin was decent on this 757-300. The seats were comfortable, although my row didn't recline, and legroom was passable. The overhead bins were standard, and the ones above my row were occupied with emergency equipment, but I didn't have any large carry-ons so it wasn't a major issue. I was particularly impressed by the IFE, it being modern and having great touch sensitivity. The content library was great too, but there wasn't live TV offered on this particular aircraft. One way that Delta could improve was on their aircraft cleaning, since there was some wrappers in the seat pocket, an unopened pack of headphones on the ground, and a vent panel near the floor that was loose. This was likely an isolated incident though, since all of my other flights on Delta had very clean cabins.
(Bottom center of picture) 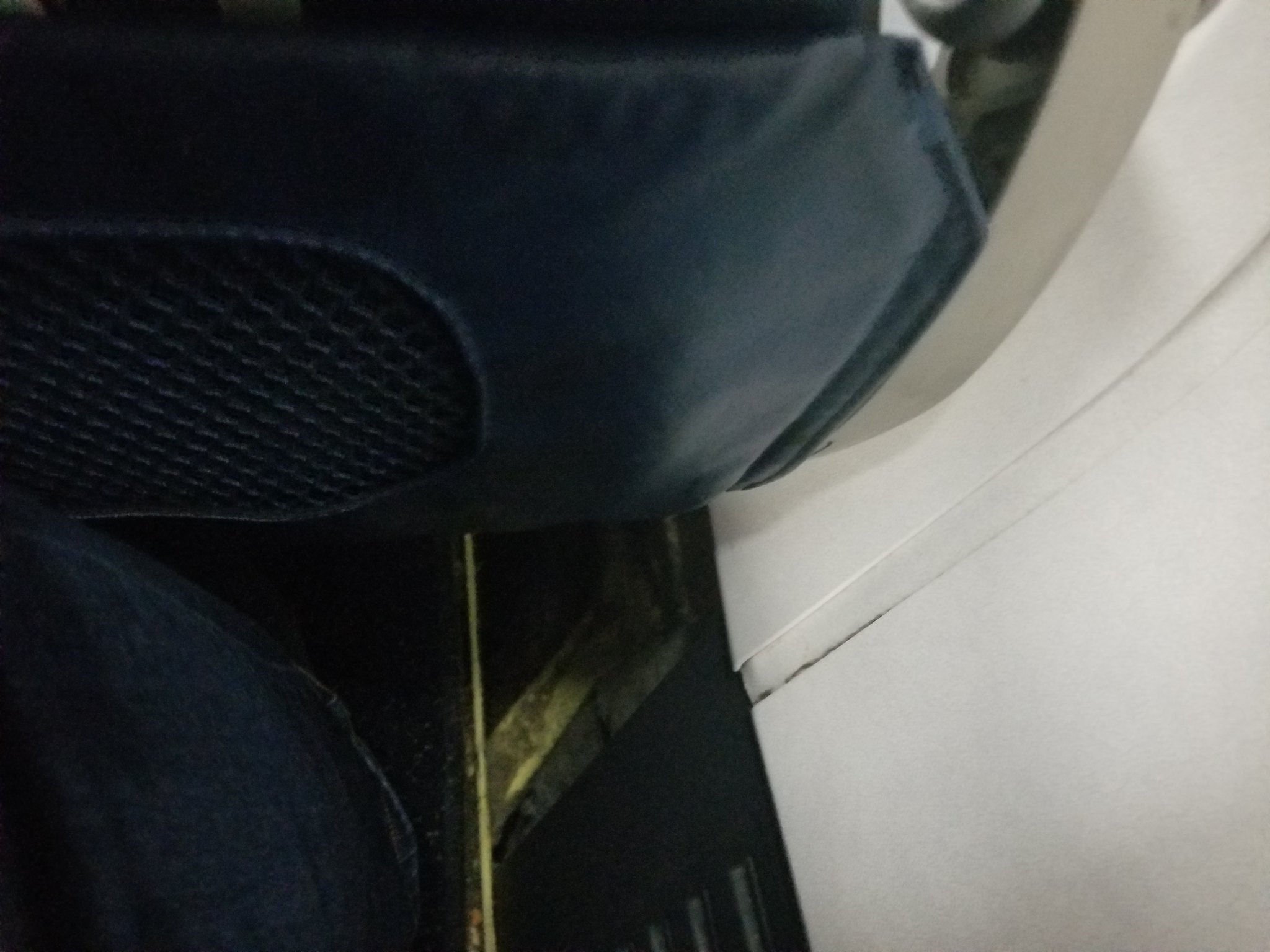 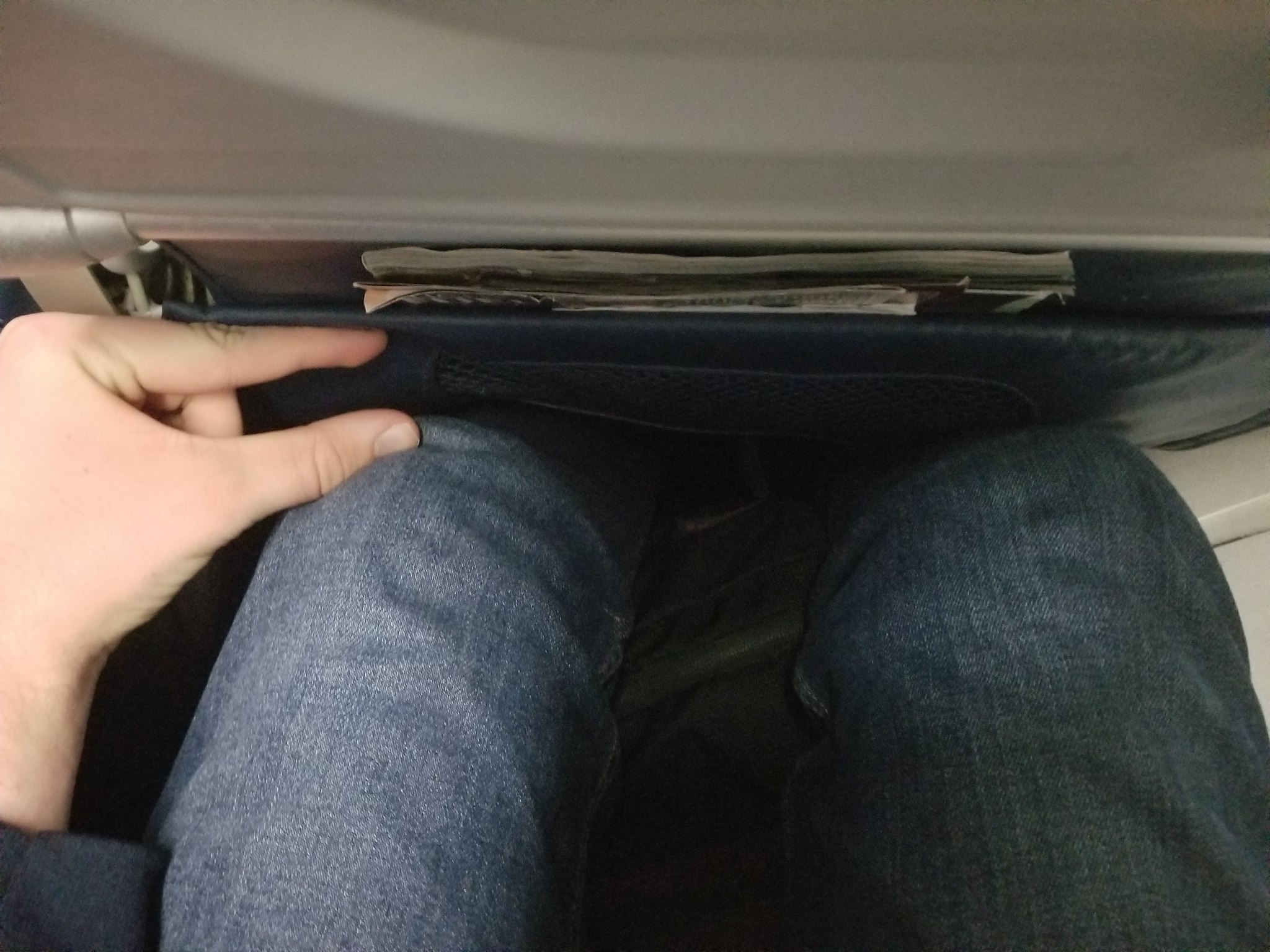 There wasn't much of a wing view, being so far back in the airplane. 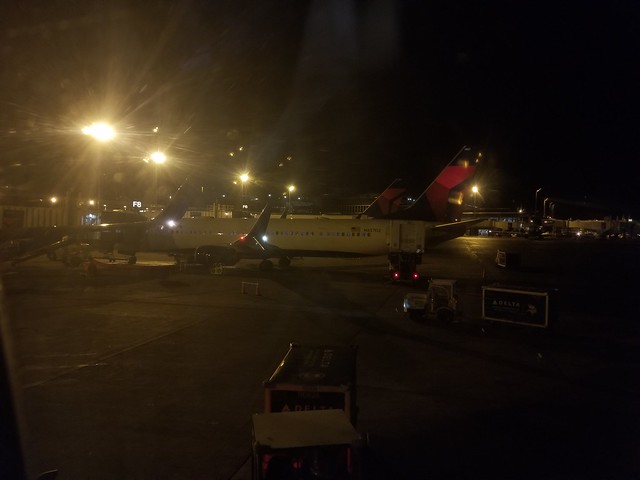 Boarding took a while, for obvious reasons, so pushback was 22 minutes late, at 8:12 pm Central time. I noticed an unusual characteristic of the 757-300 while we were taxiing-since we were sitting so far back in the airplane and the gear was so far forward, it felt like we were being "swung" or there was a pulling effect, for lack of a better description, whenever we turned a corner. There was no wait for takeoff, and a few minutes later, we shot into the cold night sky above Minneapolis, due west. As with my BNA-MSP trip report, I have a YouTube video of it.

Another unique 757-300 characteristic that I noticed while sitting in the back was that during rotation, it feels dangerously close to a tail-strike, again since the landing gear is so far forward. The initial takeoff felt relatively steep, but the climb after that felt only a little bit quicker than normal. Of course, I've never flown on any other 757, so I have nothing else to compare it to.
Wing view while climbing out. 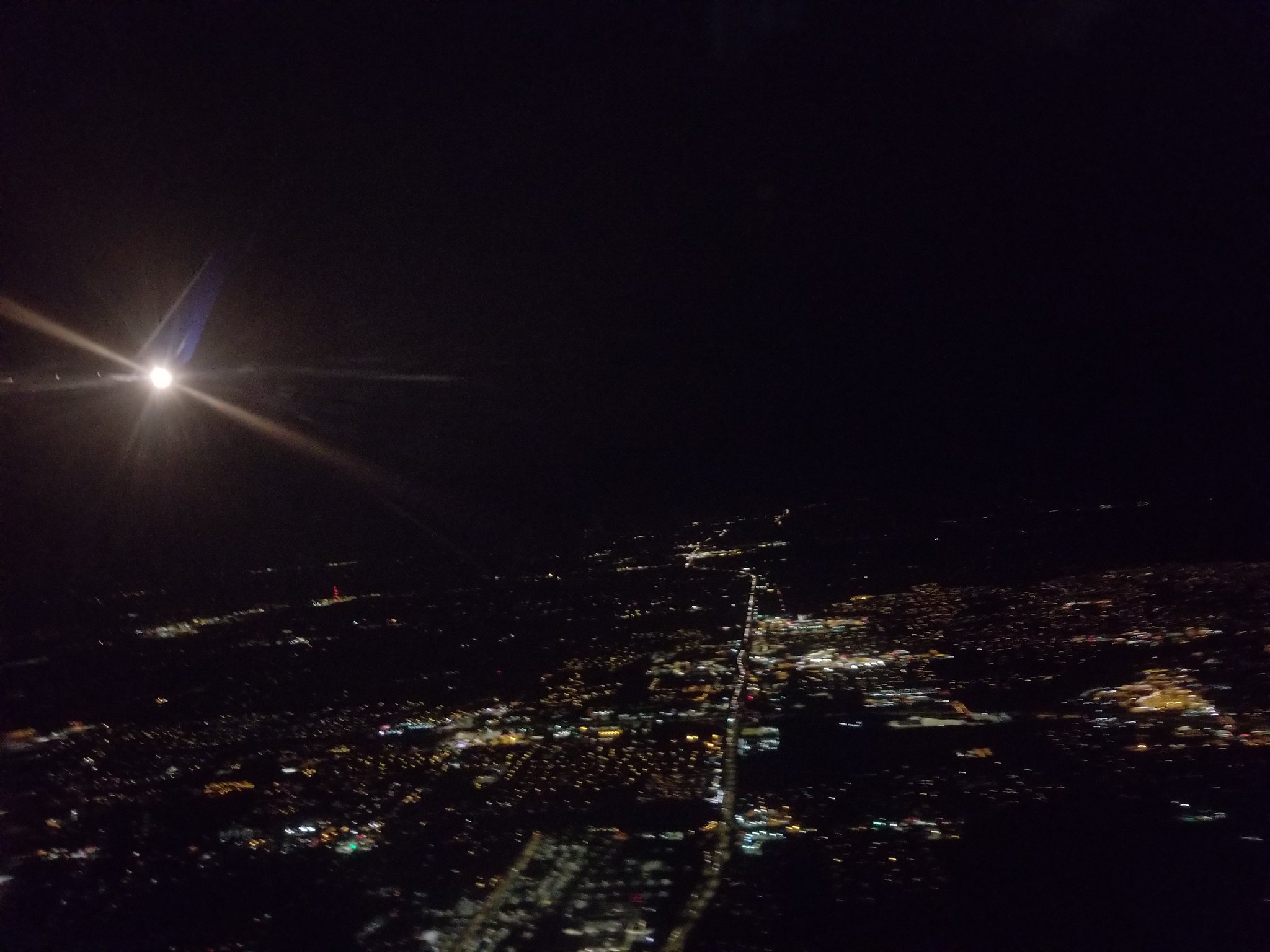 Once we got up to cruising altitude, cabin service began. Annoyingly, they only had one cart for what seemed like (and might even have been) the entire coach cabin, so it took a long time to get served. As you can probably tell by now, waiting is a recurring theme of this TR. :P When the cart finally came to my row, I took my usual, a cran-apple juice, and had a snack mix, which I saved for later. The BOB cart came a few minutes later, and I chose a turkey sandwich, which came with chips and caramel chocolate shortbread cookies. 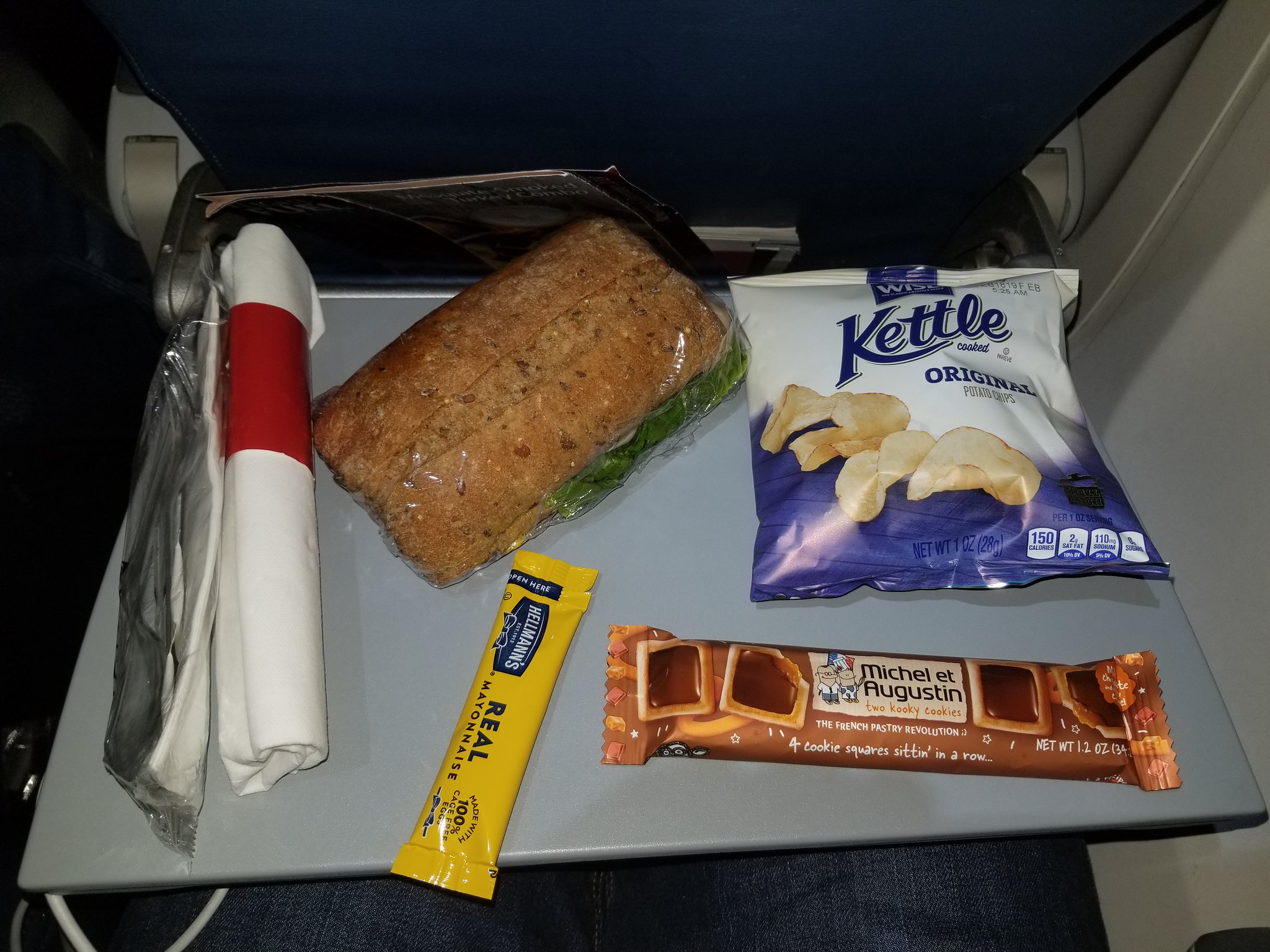 It was about $10, and it was good. My only complaints are that the sandwich was kind of dry and the oil had separated from the mayonnaise so it wasn't usable.
I watched a couple of episodes of Modern Family, but otherwise mostly kept the IFE on the flight map/aircraft data. 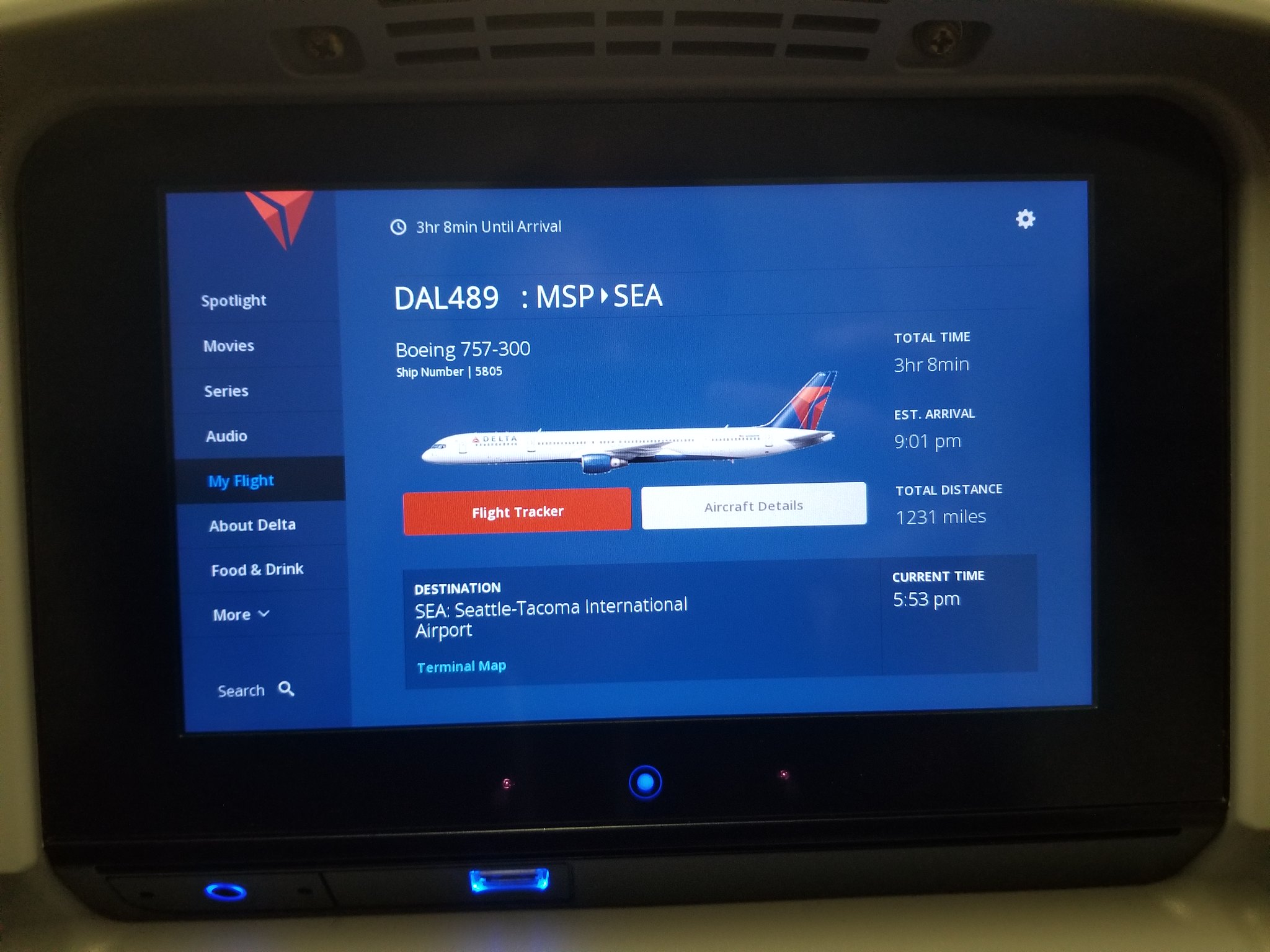 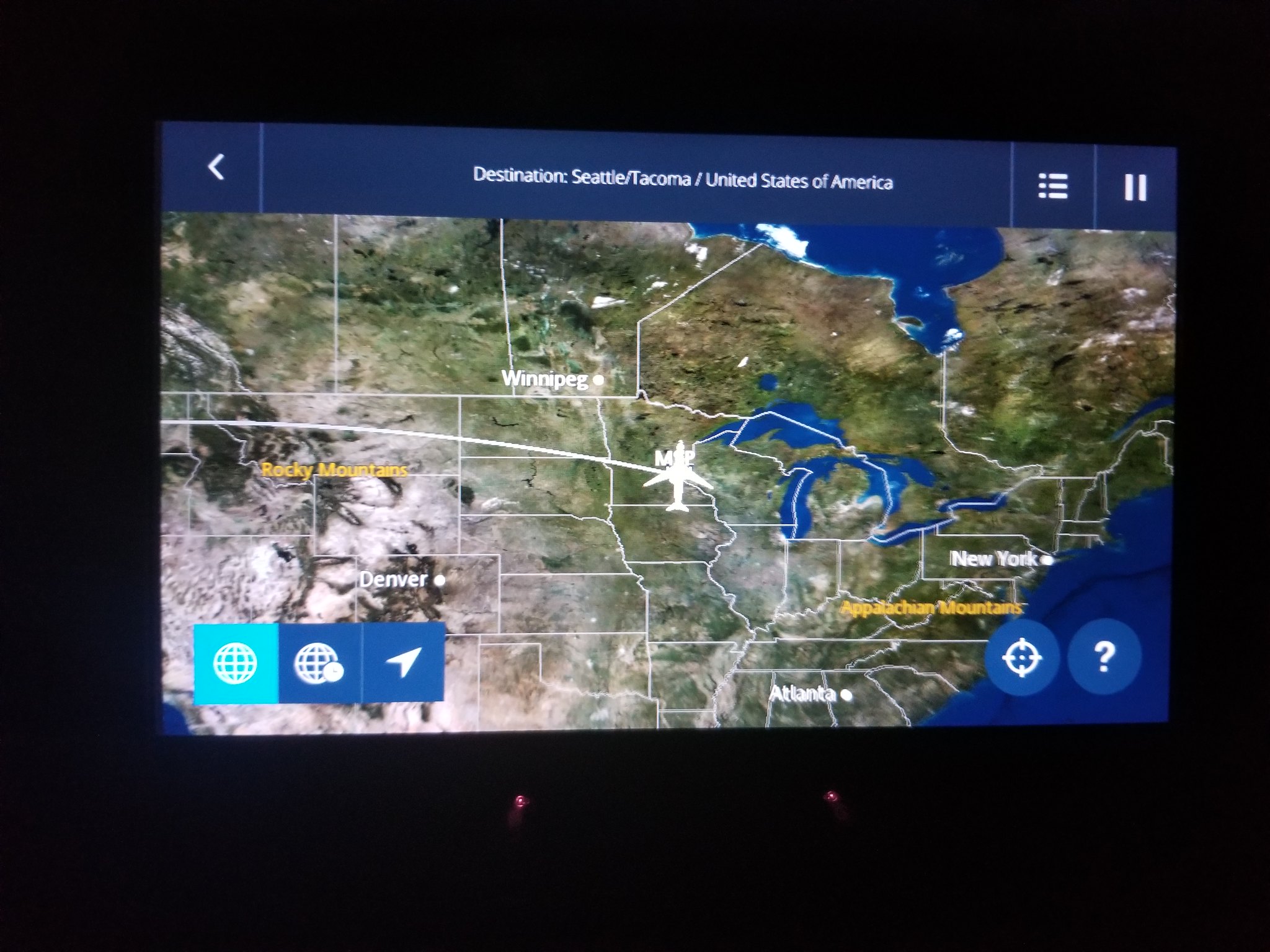 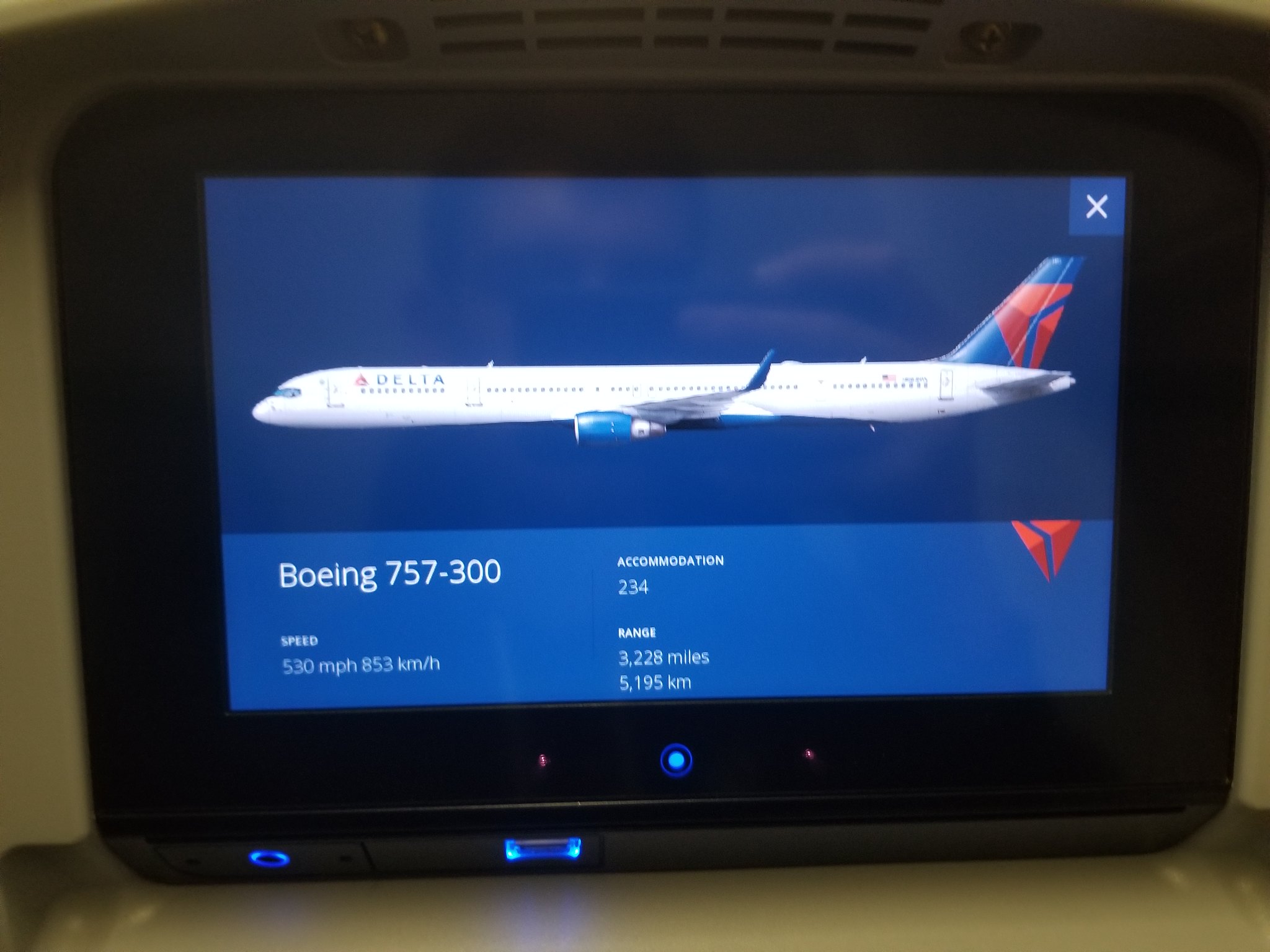 We hit some turbulence over Montana, which was interesting, since I could notice that turbulence was rougher in the back. Once that finished, I decided to get up and walk up and down the aisle of the "flying bowling alley" a few times to stretch my legs. Also, apologies for the lack of wing shots during the flight, the IFE screens caused a lot of glare and there wasn't much to see anyways.
Looking up the aisle from the back. 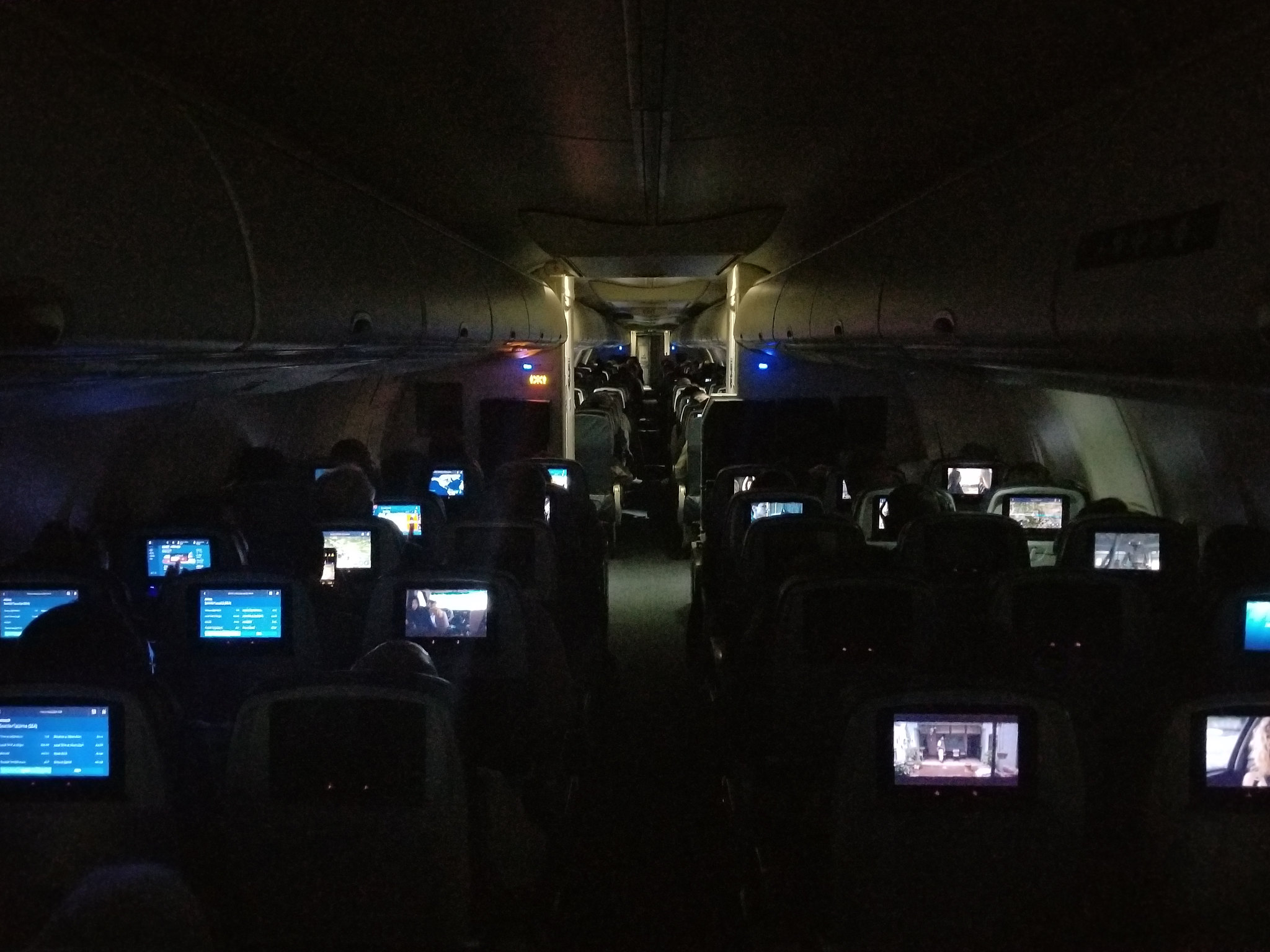 I visited one of the mid-cabin lavatories (there were none behind us which eased the pain of sitting in the back), and it was clean. 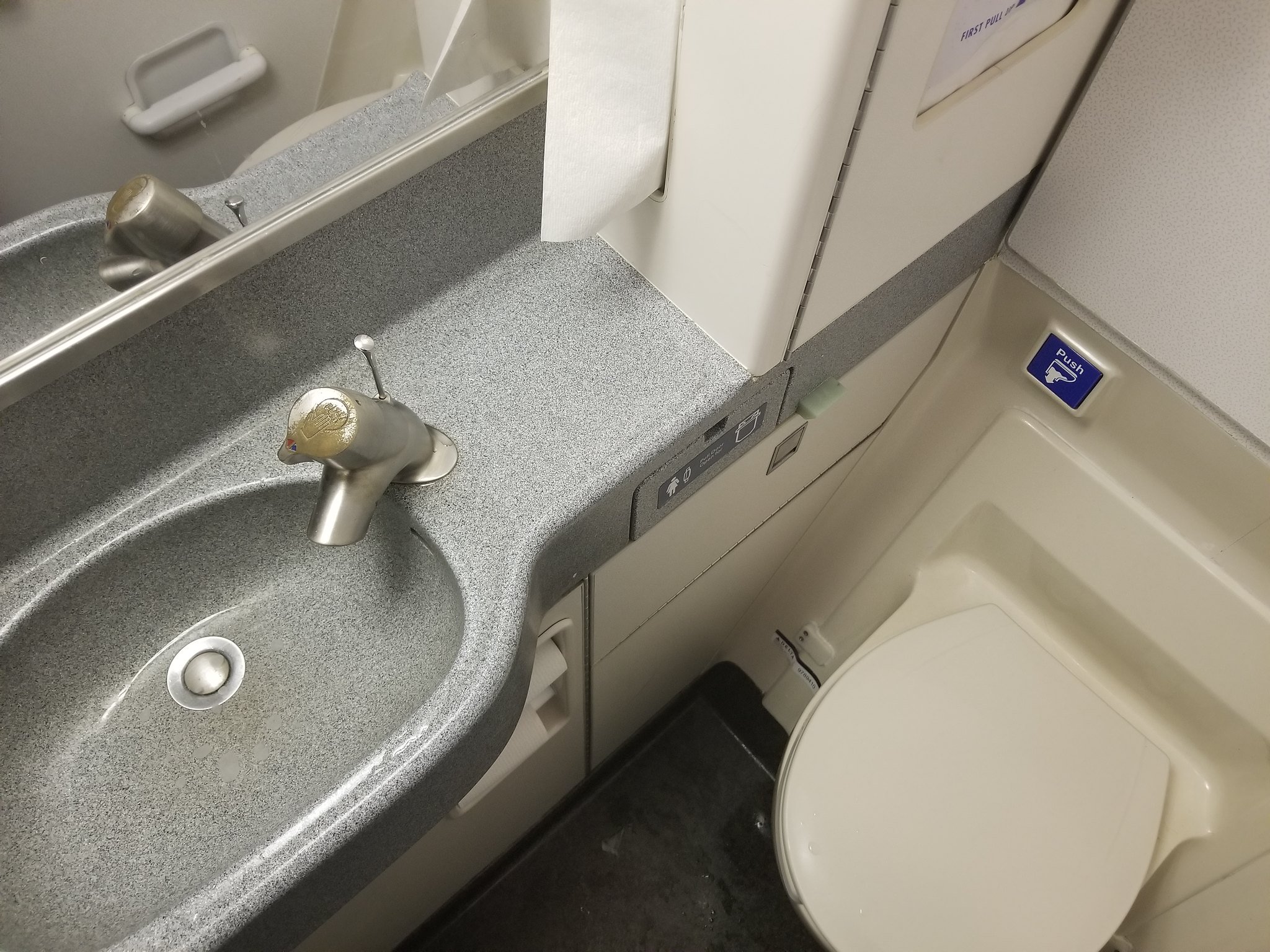 Descent began a few minutes before 9 pm Pacific time, 3 hours into the flight. We approached from the south, and had a rough touchdown (likely exacerbated due to the fuselage shaking) on runway 34L at 9:34 pm. 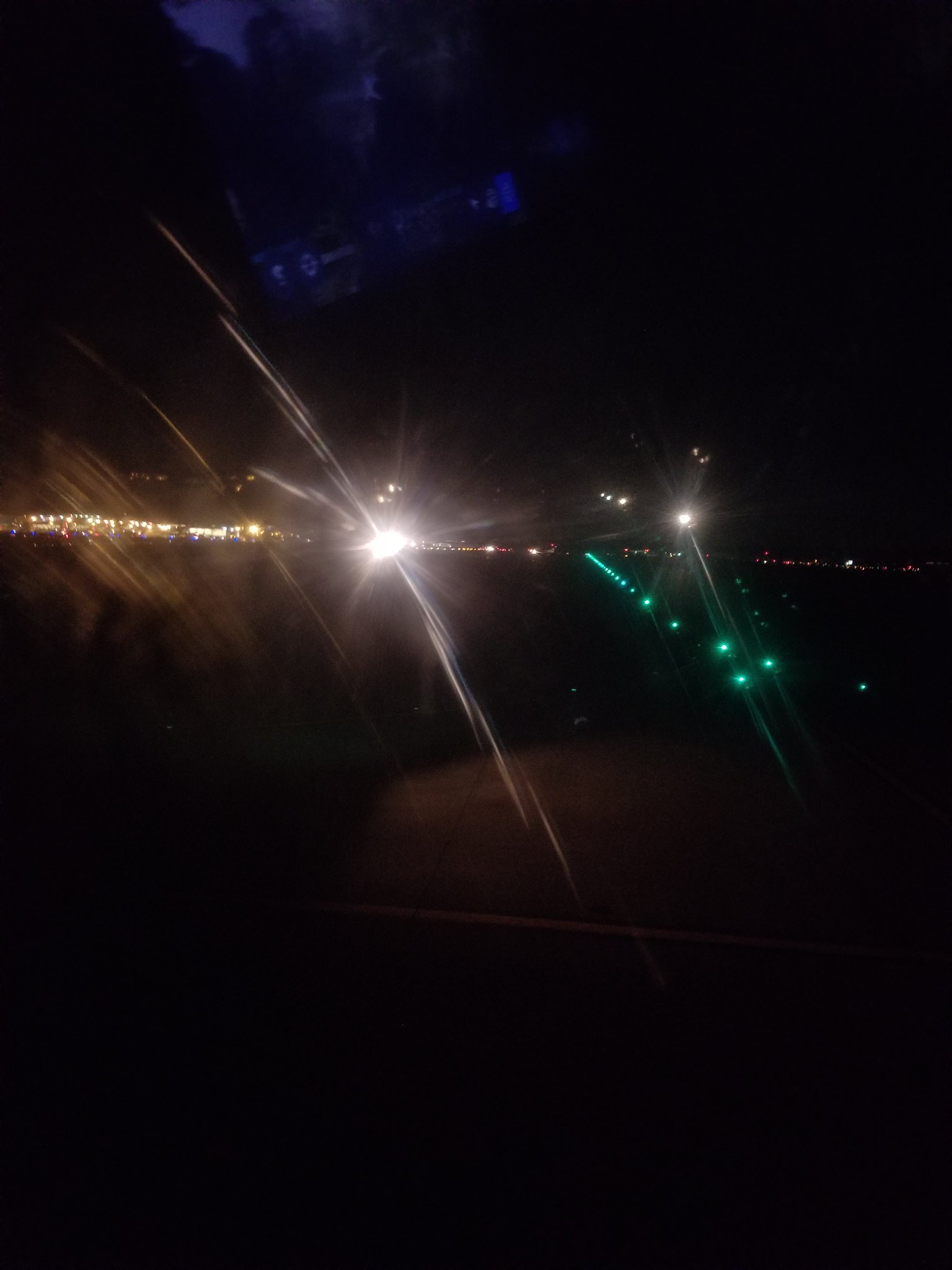 We taxied to our gate, S7, with an Aeromexico 737-800 and a Volaris A320 to our right, headed to Mexico City and Guadalajara respectively. 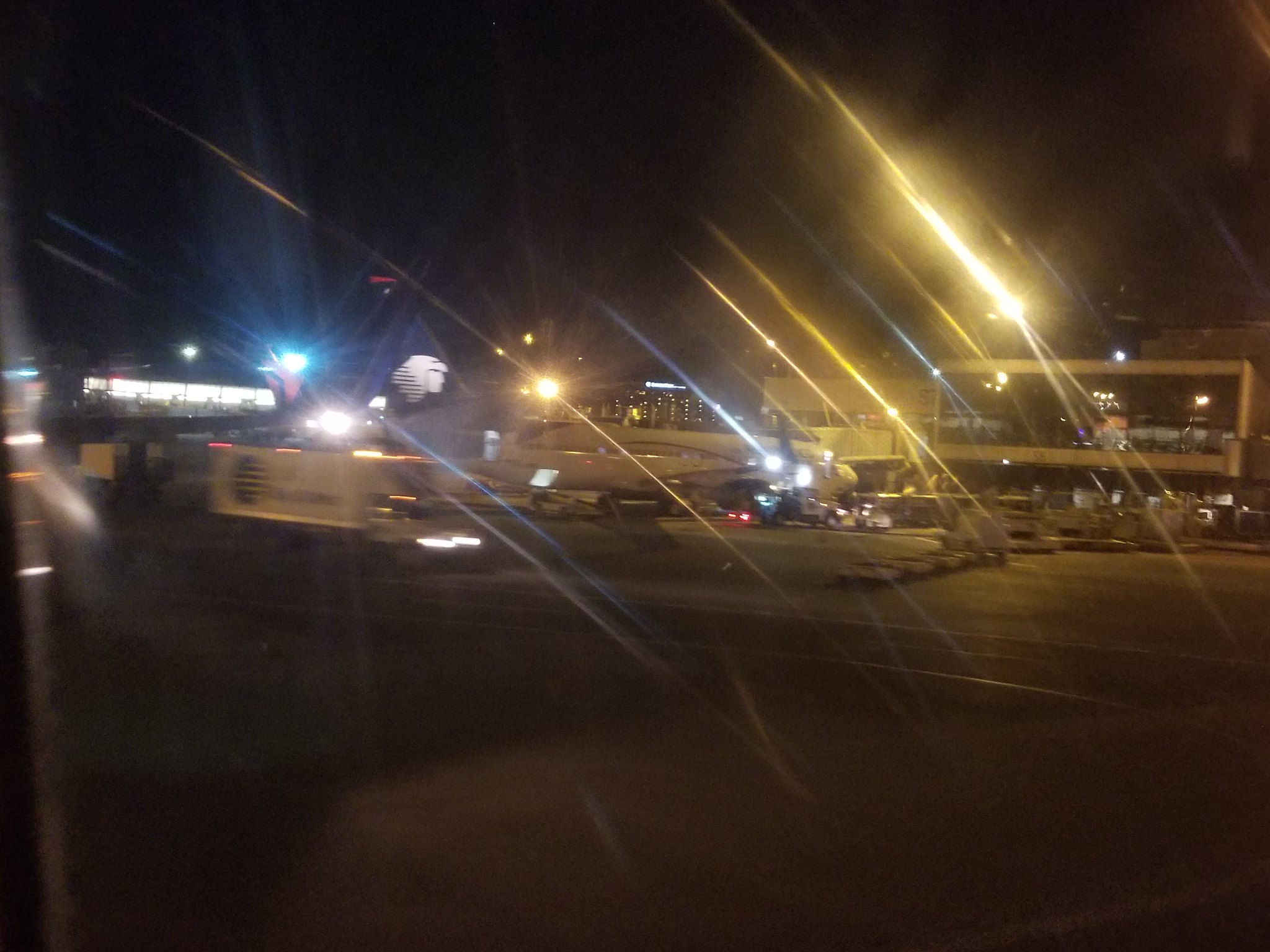 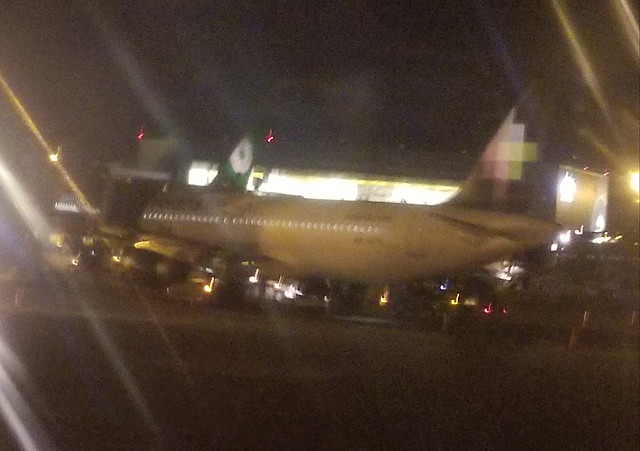 After we parked at the gate, it took a good 25 minutes before we deplaned. My grandparents went out in the terminal, while I asked to visit the cockpit, because avgeek. 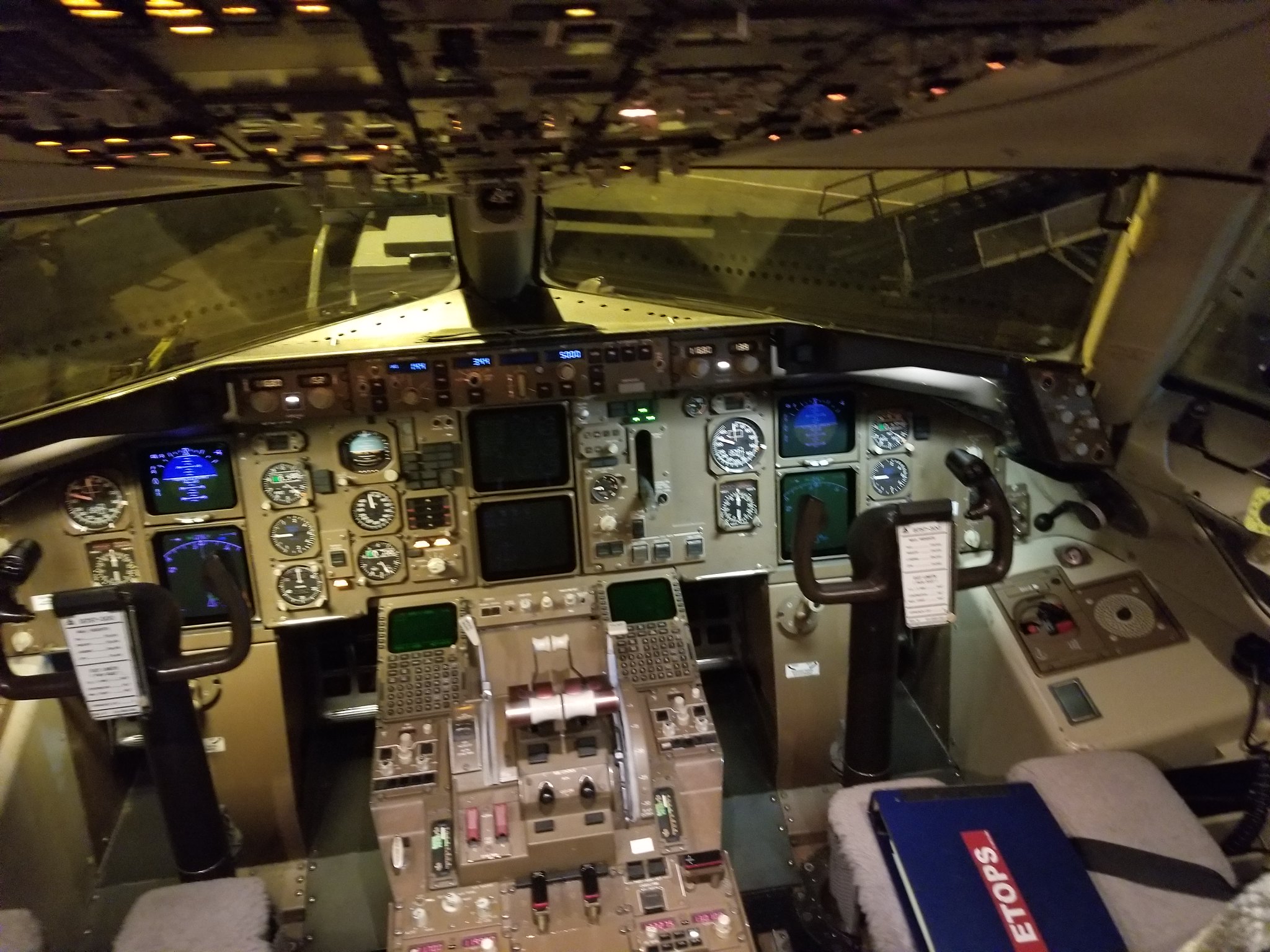 Then I deplaned, and went into the terminal. My plane was returning back to Minneapolis shortly after midnight, then was scheduled to fly to Los Angeles and Honolulu the next day.
The South Satellite. It wasn't terribly busy at this hour, since the only flights were some redeyes preparing to depart. 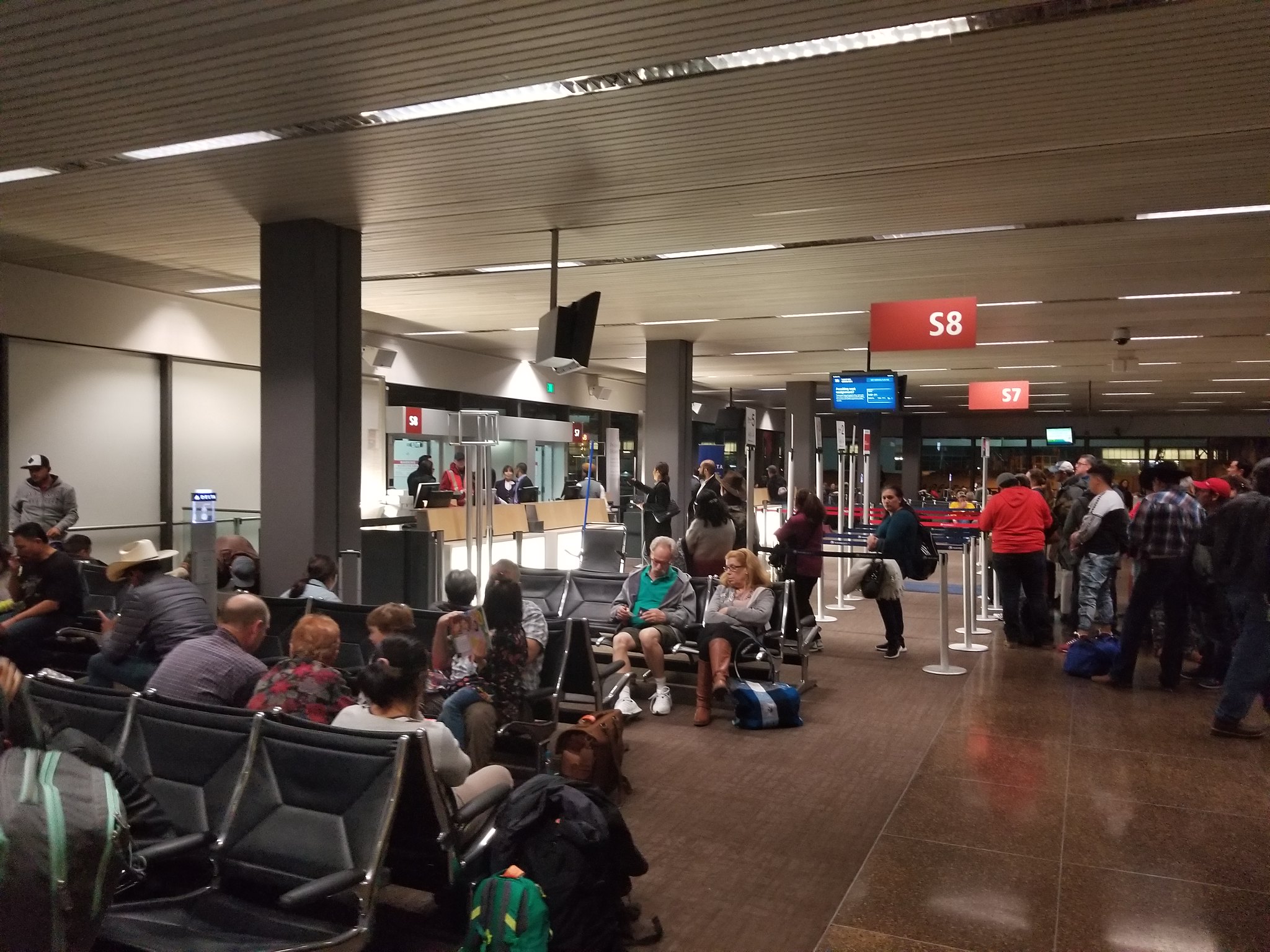 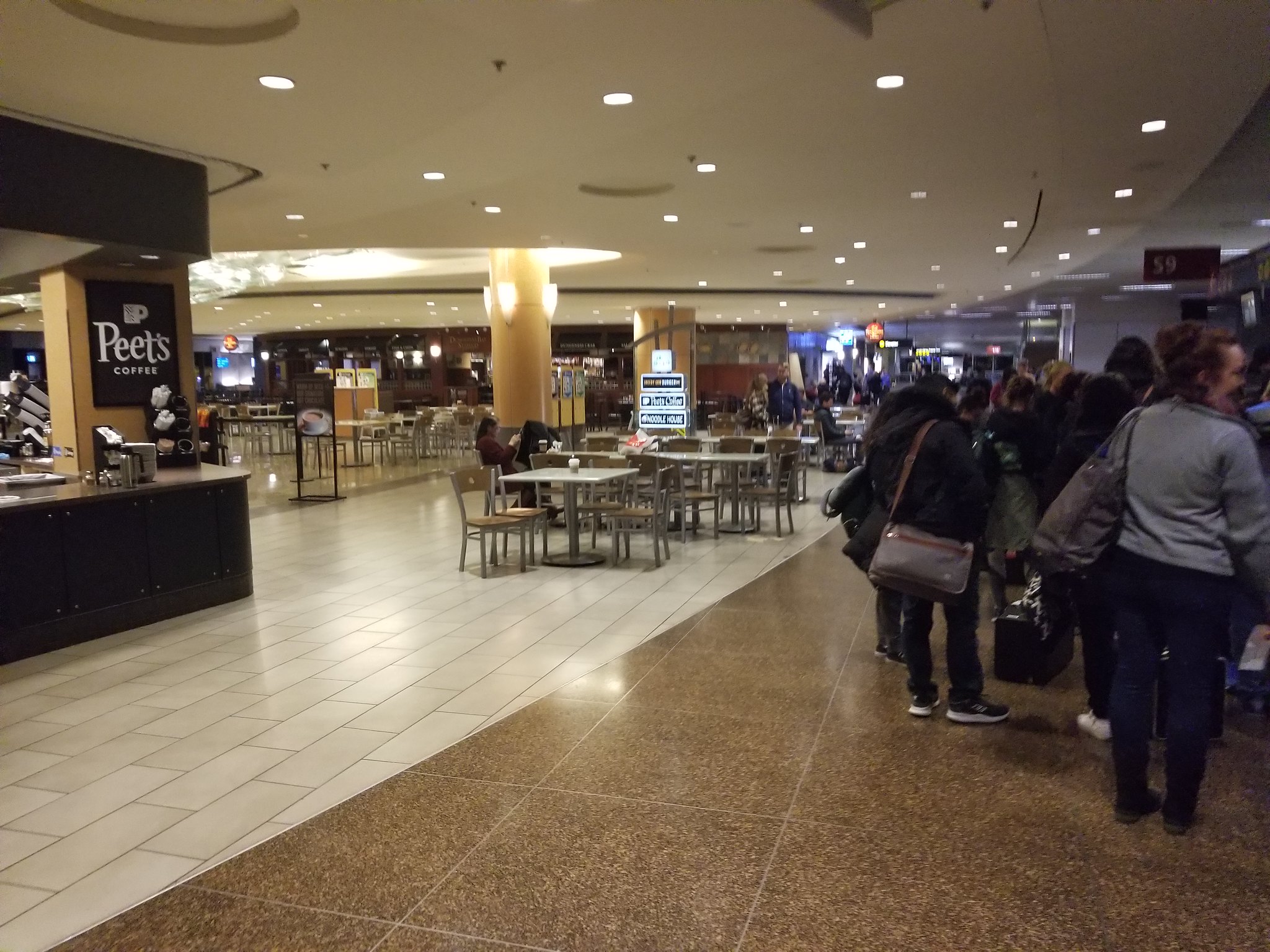 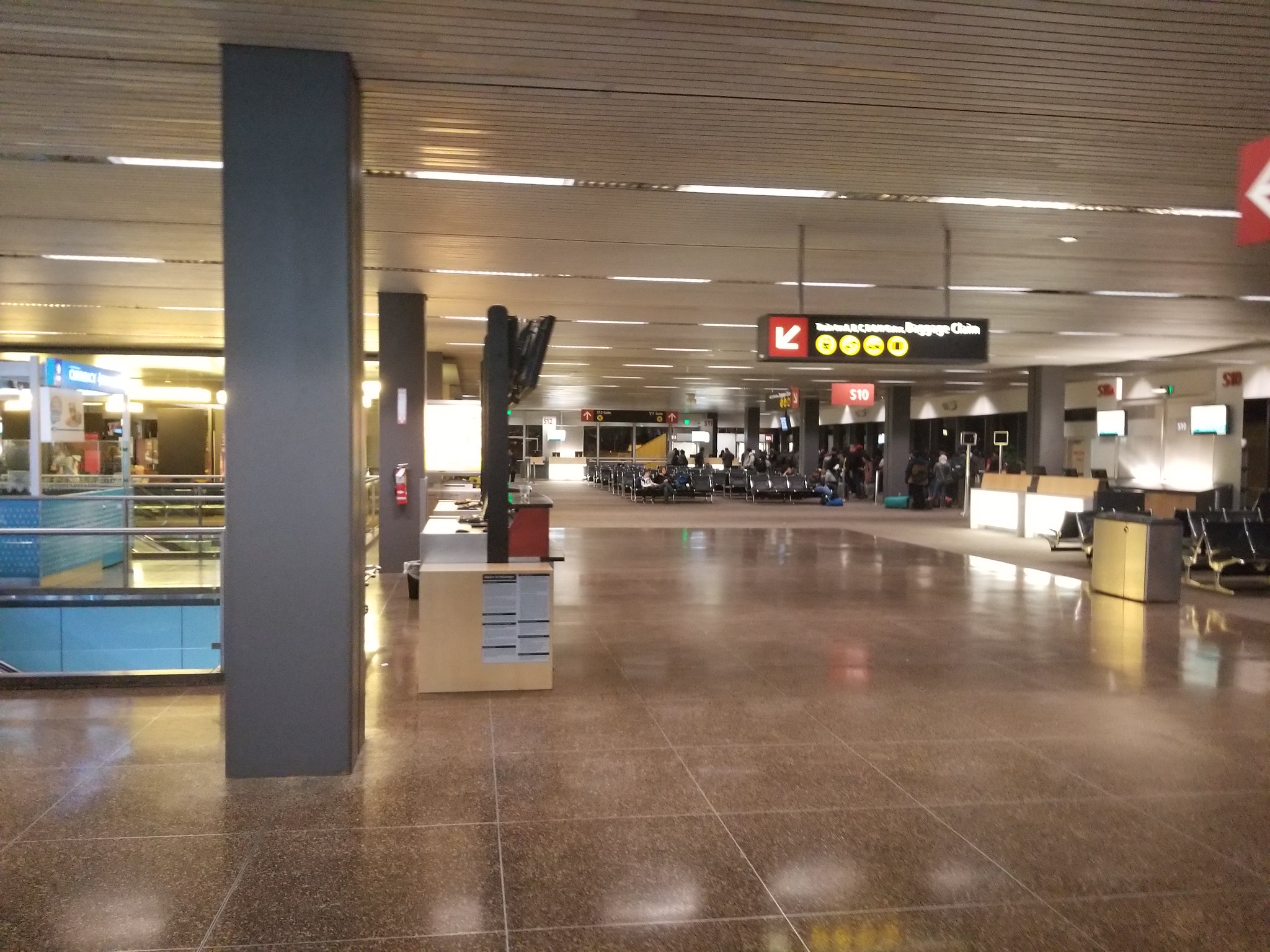 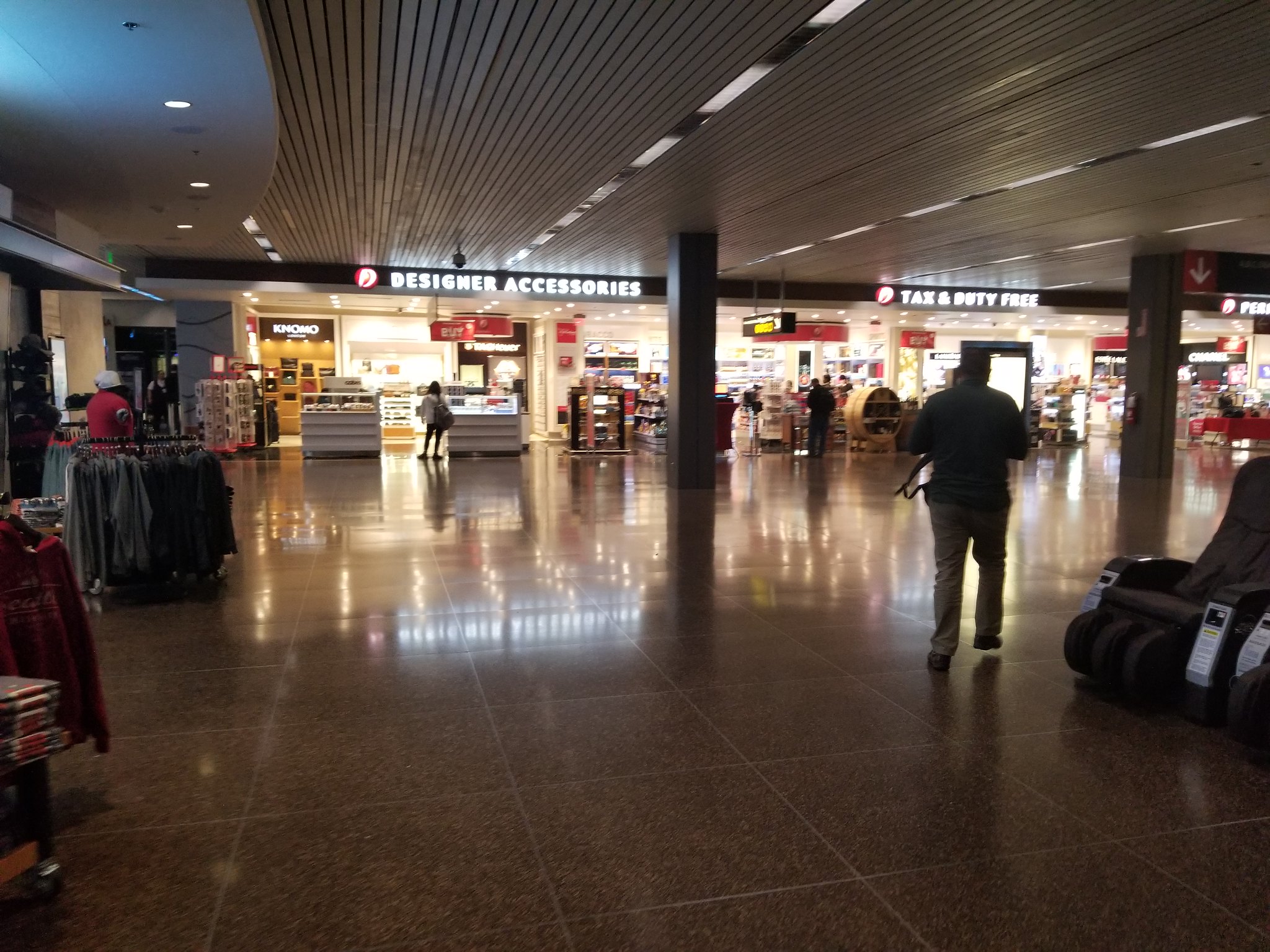 The escalators down to the train station, which takes you to the A and B gates in the main terminal. 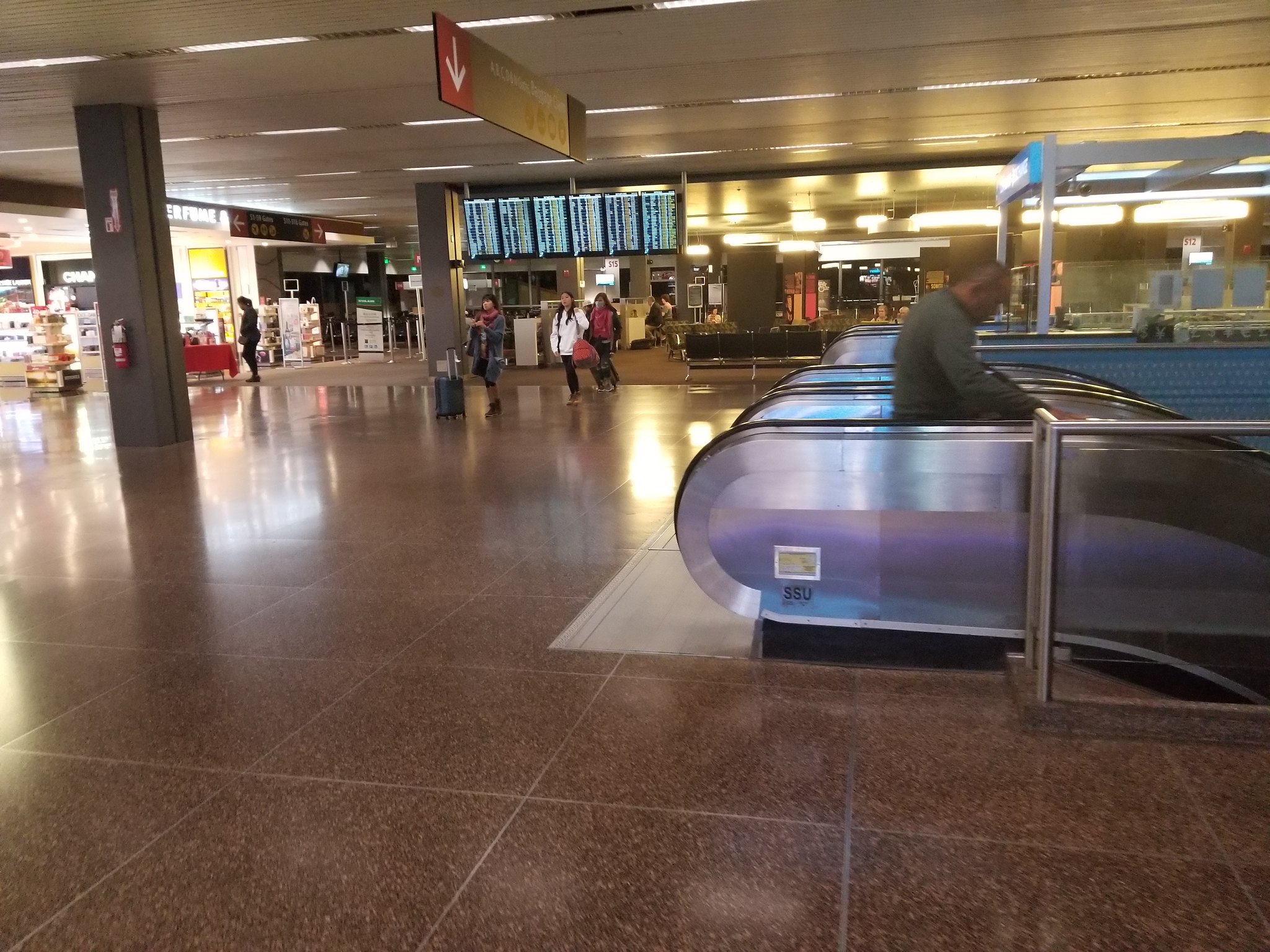 The A gates station. 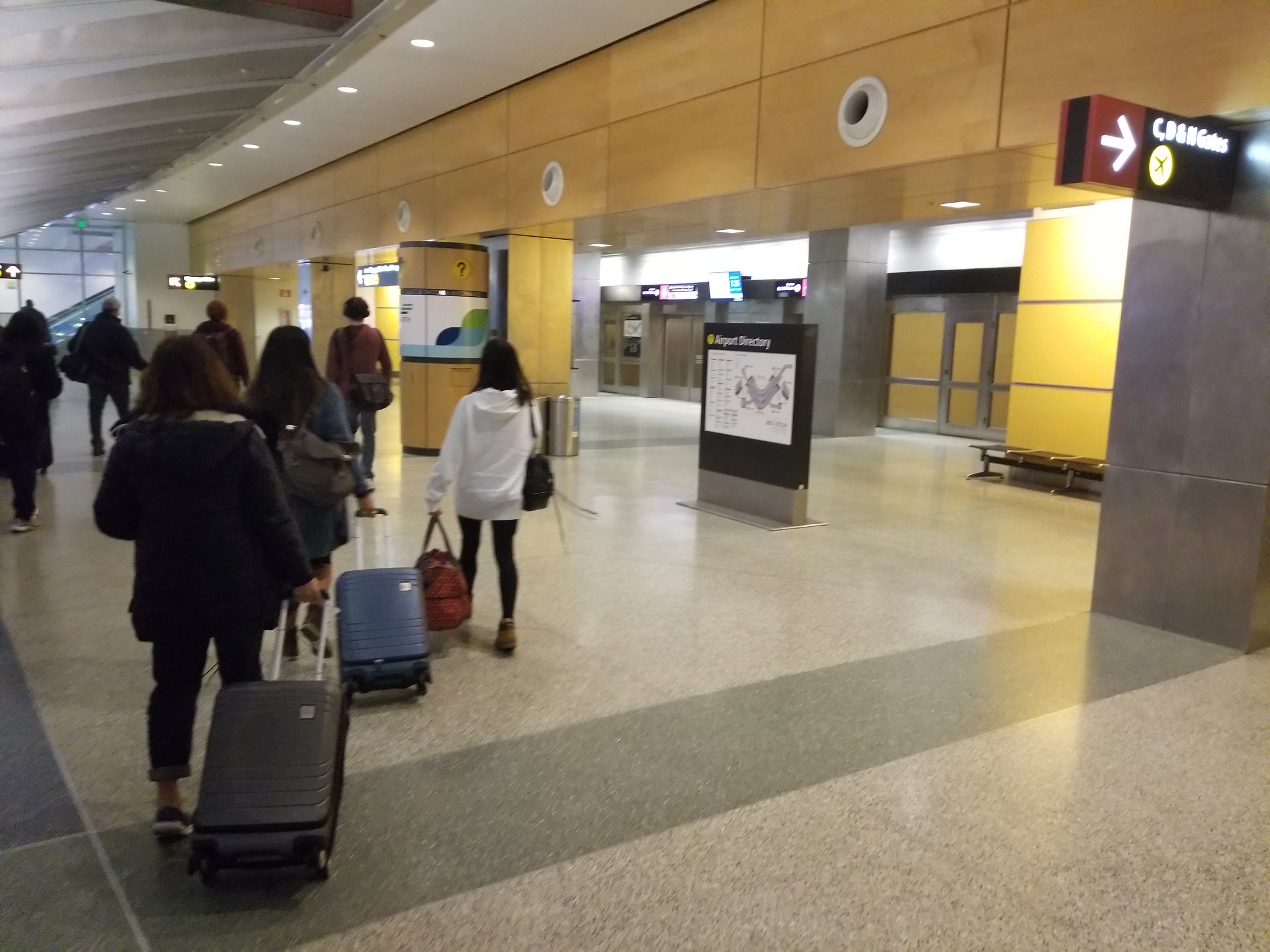 I then went to baggage claim, where my dad was waiting with our bags, which had arrived about 10 minutes before. We went to his car in the parking garage, and were out of the airport by 10:30.
Here's the FR24 stats for my flight,

I was fairly satisfied with this flight on Delta Air Lines. Although it was annoying sitting in the back row, the service was good, the IFE was great, and the seat was relatively comfortable, as economy goes. Plus, I was grateful to fly the 757-300, a fairly rare aircraft type. I was also satisfied with MSP airport, but found the layout confusing and would prefer to book a longer connection if I fly through there again. As for Sea-Tac, it was its usual self-overcrowded but functional, and it wasn't too bad at that hour. I wouldn't hesitate to fly Delta Air Lines or the 757-300 again, but a word of advice on the 757-300-if you have a short connection or hate waiting to deplane, don't pick a seat in the back if you have any choice in the matter.

The contributors of Flight-Report published 3 reviews of 1 airlines on the route Minneapolis (MSP) → Seattle (SEA).

The average flight time is 2 hours and 45 minutes.