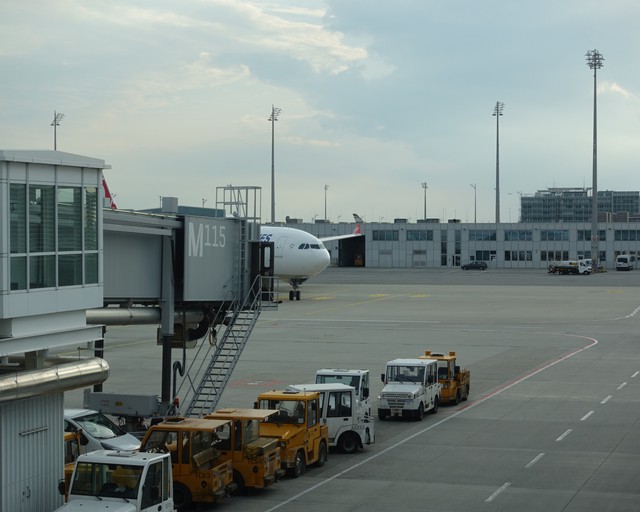 #12 out of 71 Airlines A minimum of 10 flight-reports within the past two years is required to appear in the rankings. 672 reviews

Hello everyone!  Welcome to this new series from Germany to Hong Kong. This time I was flying with Turkish Airlines with the transit at Istanbul. This report will cover the flight from Munich to Istanbul. Three years ago shortly before the terrorist attack in Istanbul airport, I also flew Turkish Airlines from Asia to Europe and I was having a really good experience with them, so this time it was interesting to see how the airlines change over the past three years. Besides, this would be my first visit to the new Istanbul airport.

I arrived at Munich airport at 18:37pm. Although Turkish Airlines belongs to Star Alliance, they utilize terminal one instead of terminal two. Once I got off the S-Bahn, I checked my flight from the FIDB. It showed that my flight TK1636 would depart from gate C10 and the check-in counters were C133-C138. It also indicated that my flight would be delayed for 45 minutes. The new departure time was 19:15pm. 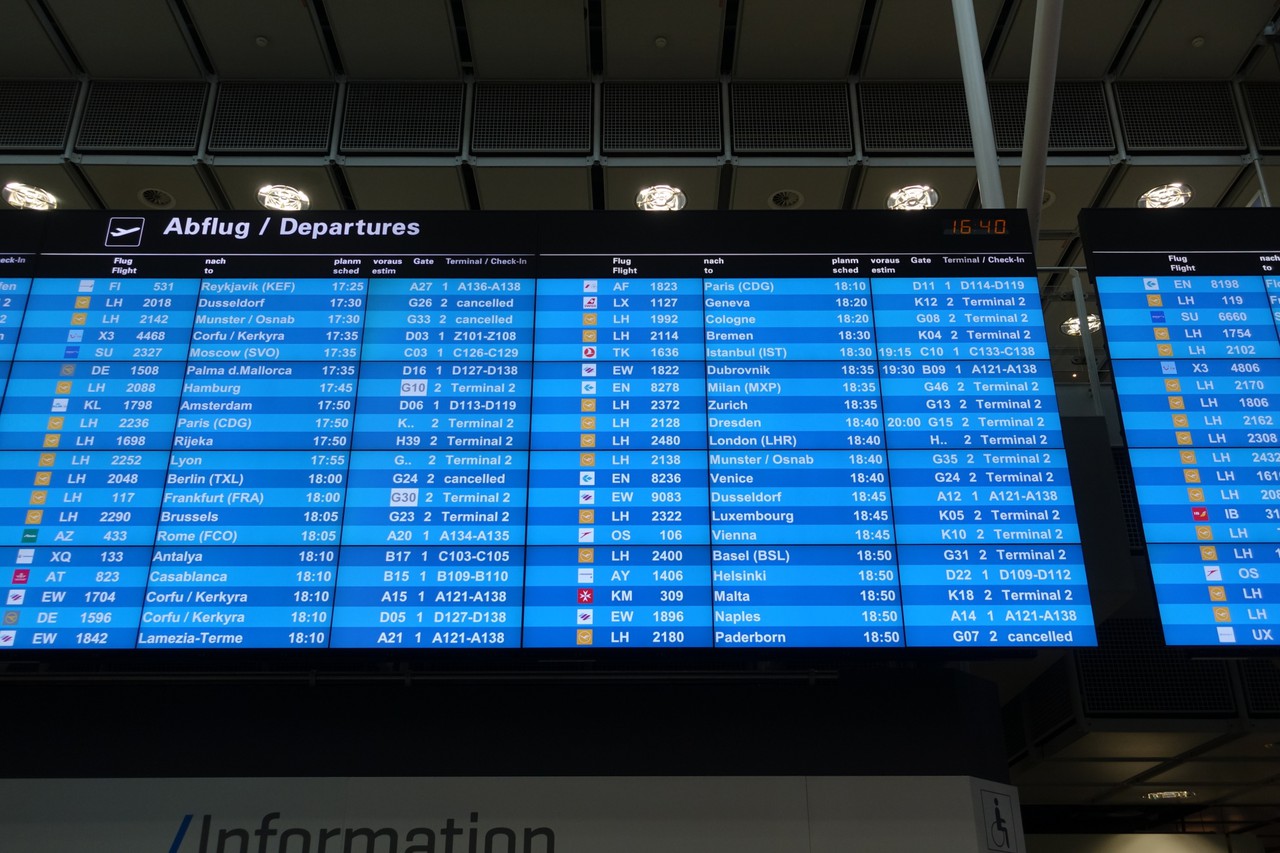 As I reached the check-in counters, I was literally shocked because I saw so many people lining up there. At last, it took 40 minutes to finish the check-in process. Then we headed immediately to the security check and immigration. 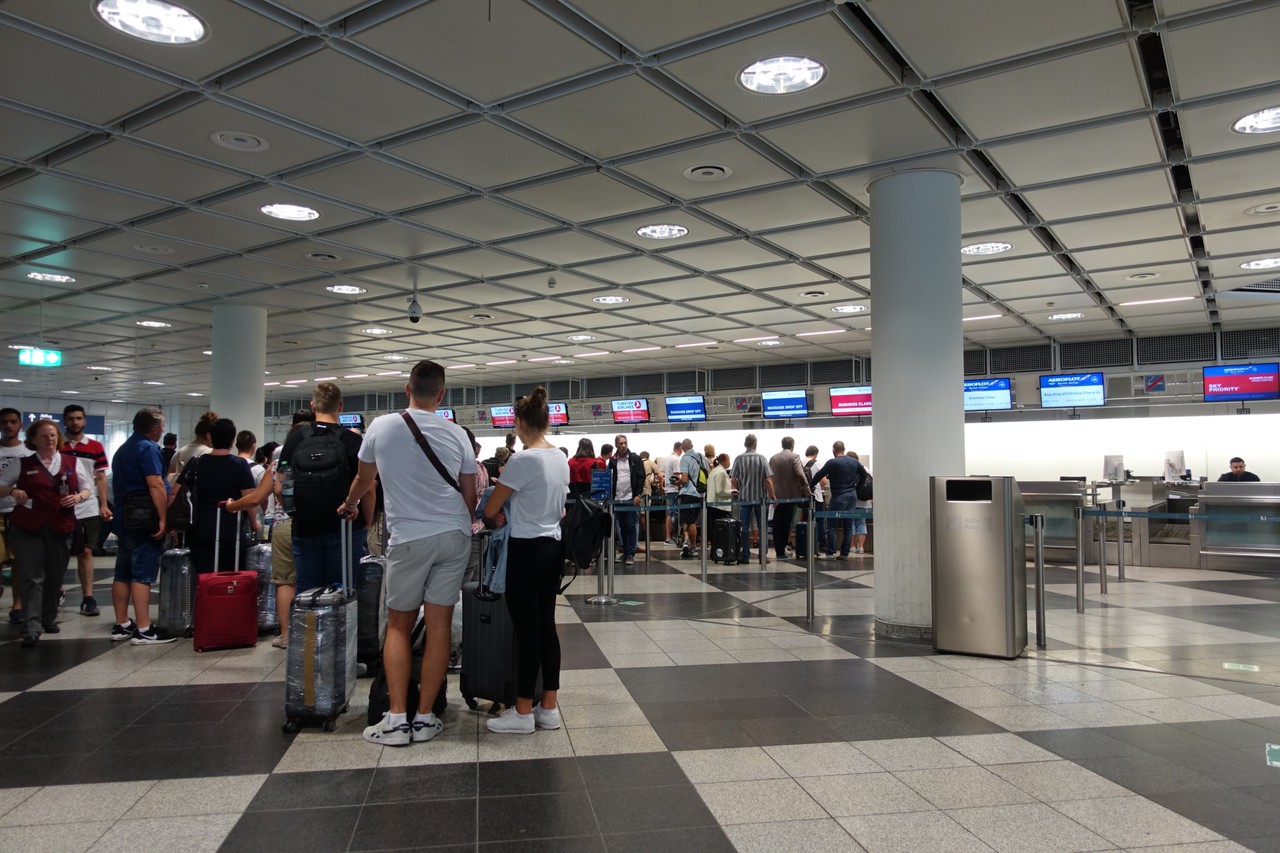 After we got through the immigration, we found a kiosk and had a light meal. 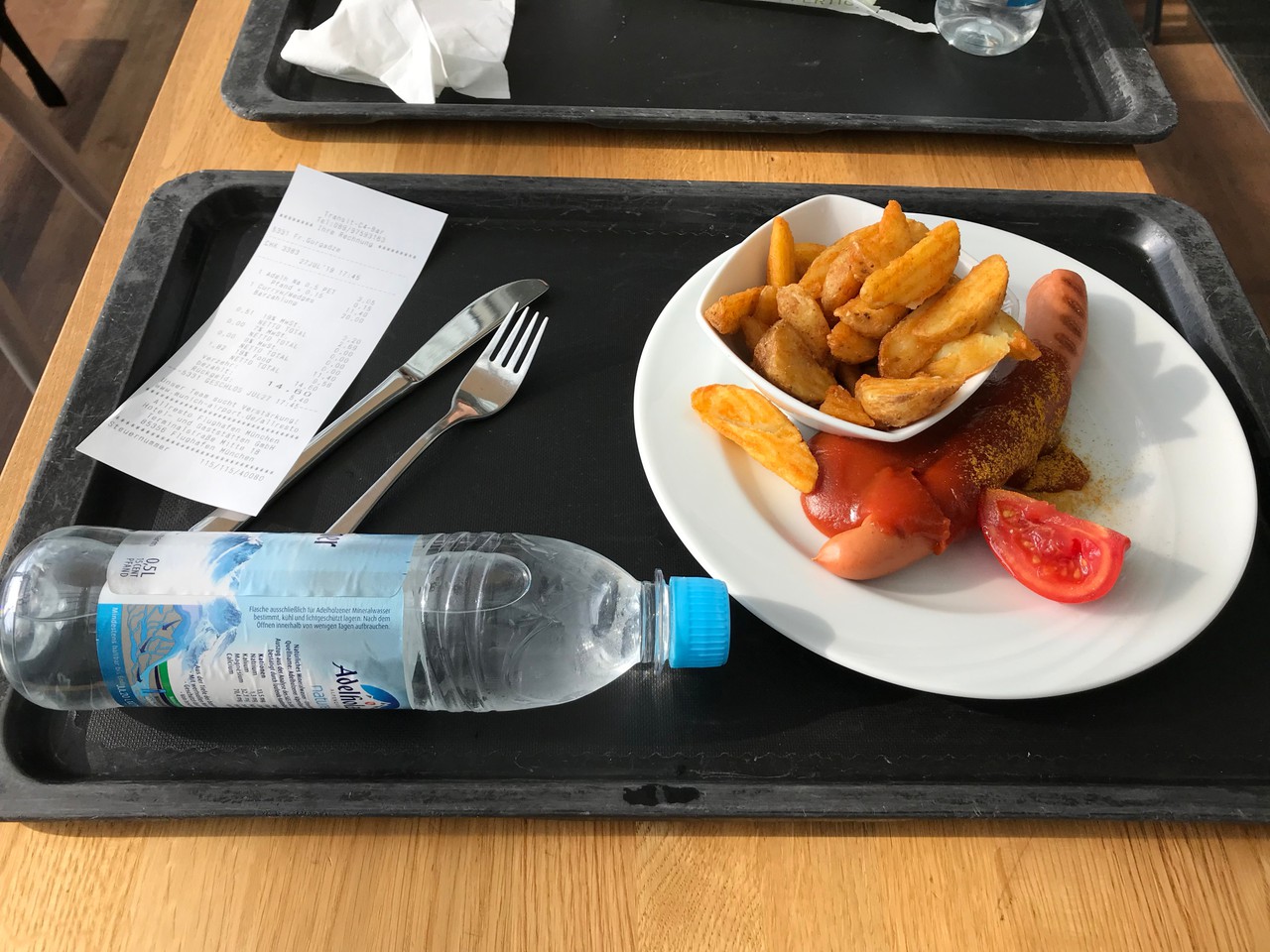 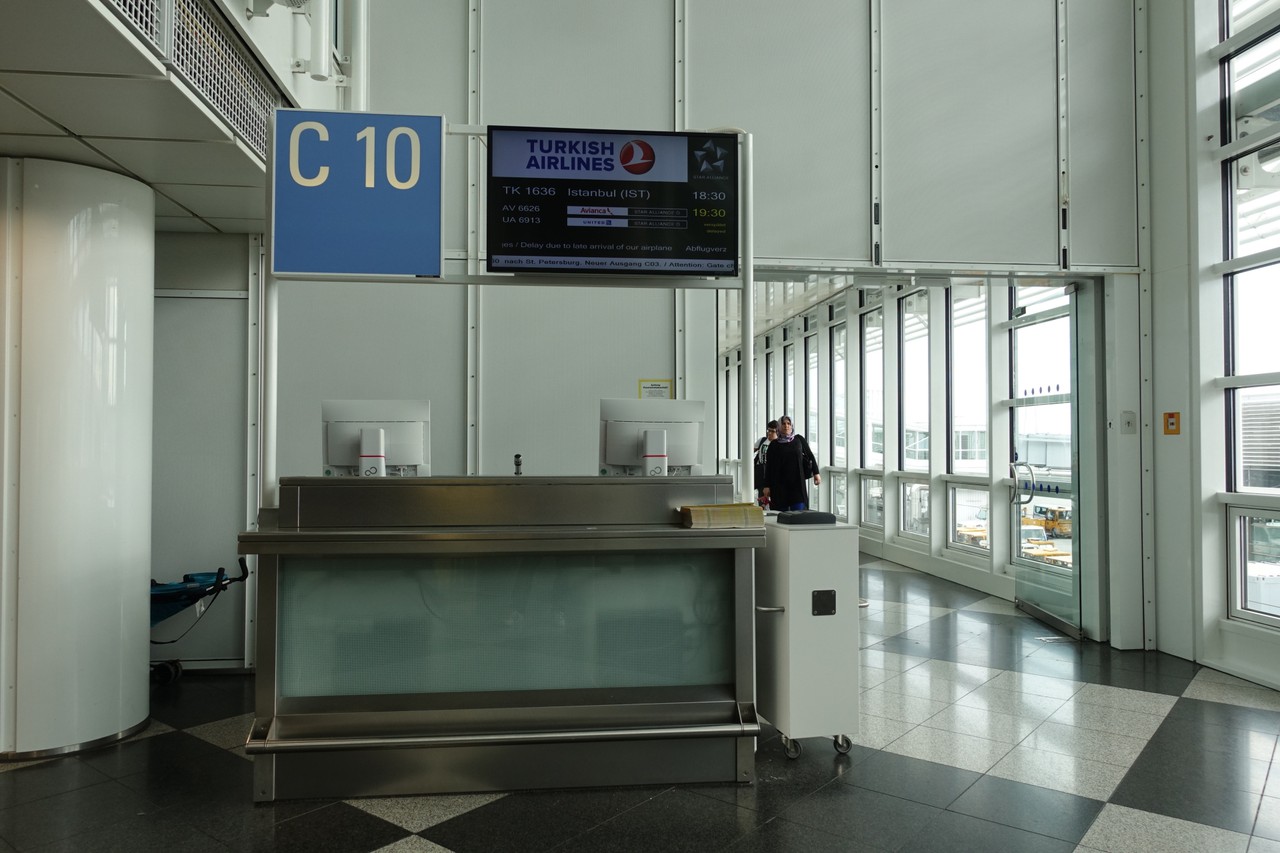 The gate was located inside a corridor. In order to get onboard earlier, I decided to wait inside the corridor. The boarding pass for my flight TK1636 to Istanbul and TK70 to Hong Kong. 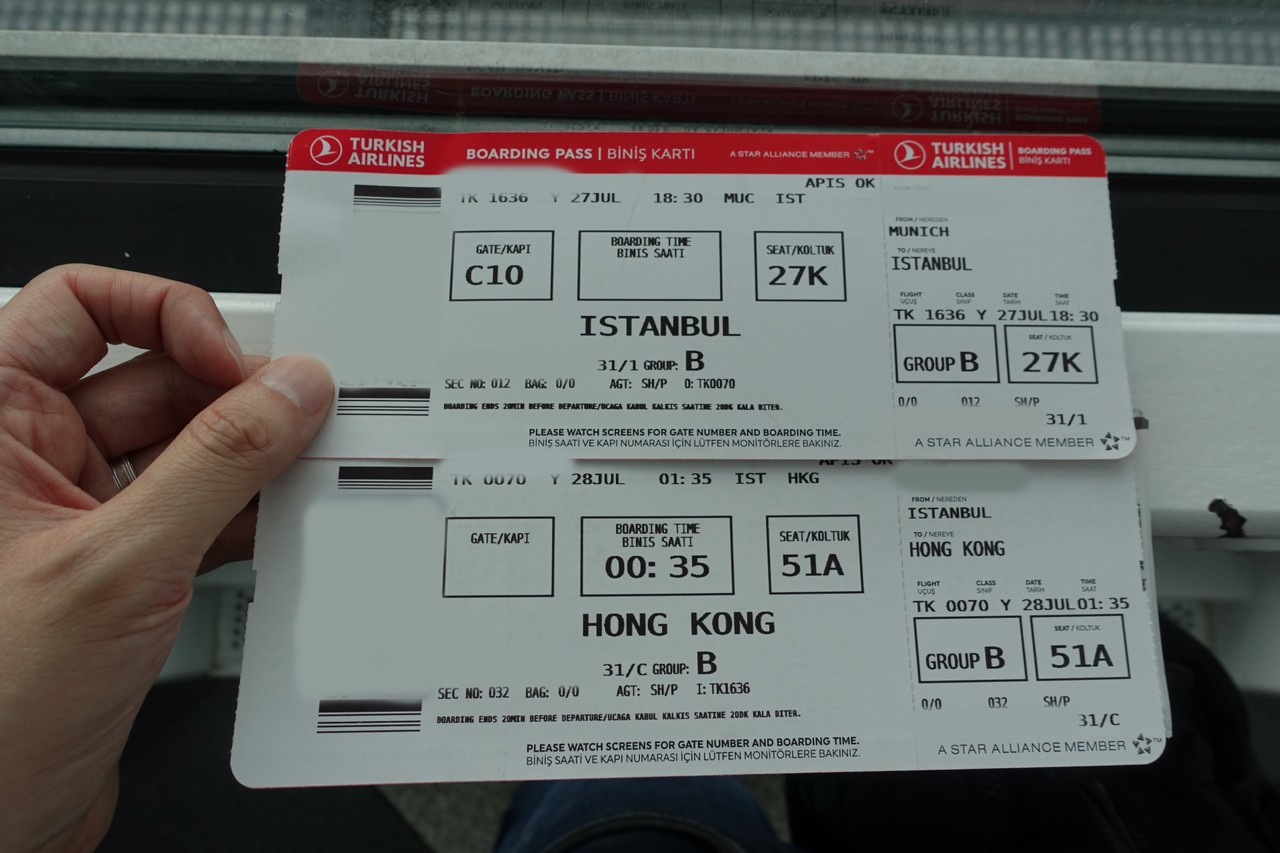 At 19:19pm, my plane arrived from Istanbul as TK1635 and it was delayed for two hours. TC-LND, an A330-300 delivered to Turkish Airlines in February 2016. I was pretty sure that it would take another 30 to 40 minutes until the boarding could begin. 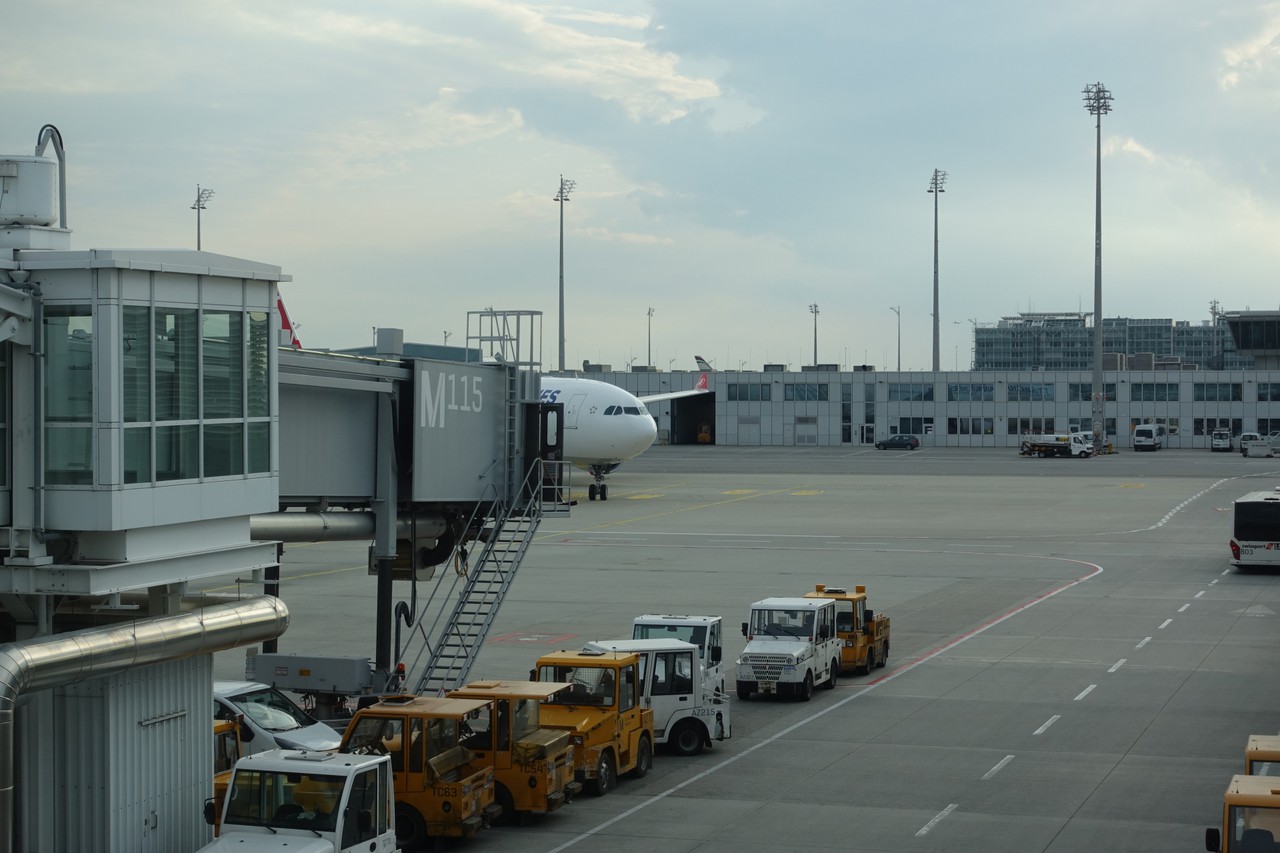 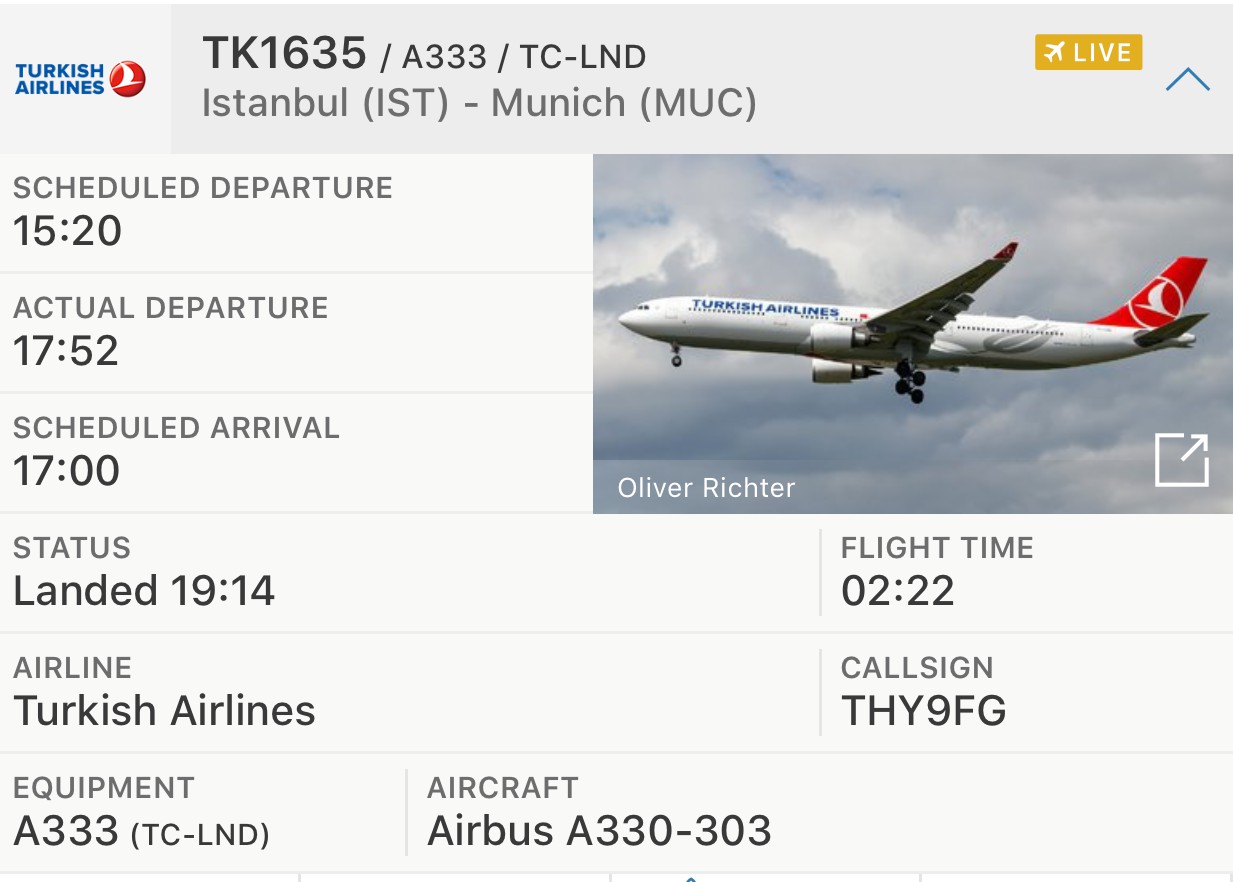 So… boarding was called at 19:57pm. My seat was located in 27K. Pillow and earphone were placed in advanced on the seat. The Turkish Airlines A330-300 have 289 seats with 28 in business class and 261 in economy. Seat configuration is 2-4-2 for economy class except the last five rows. Seat pitch is 31-33 inches. 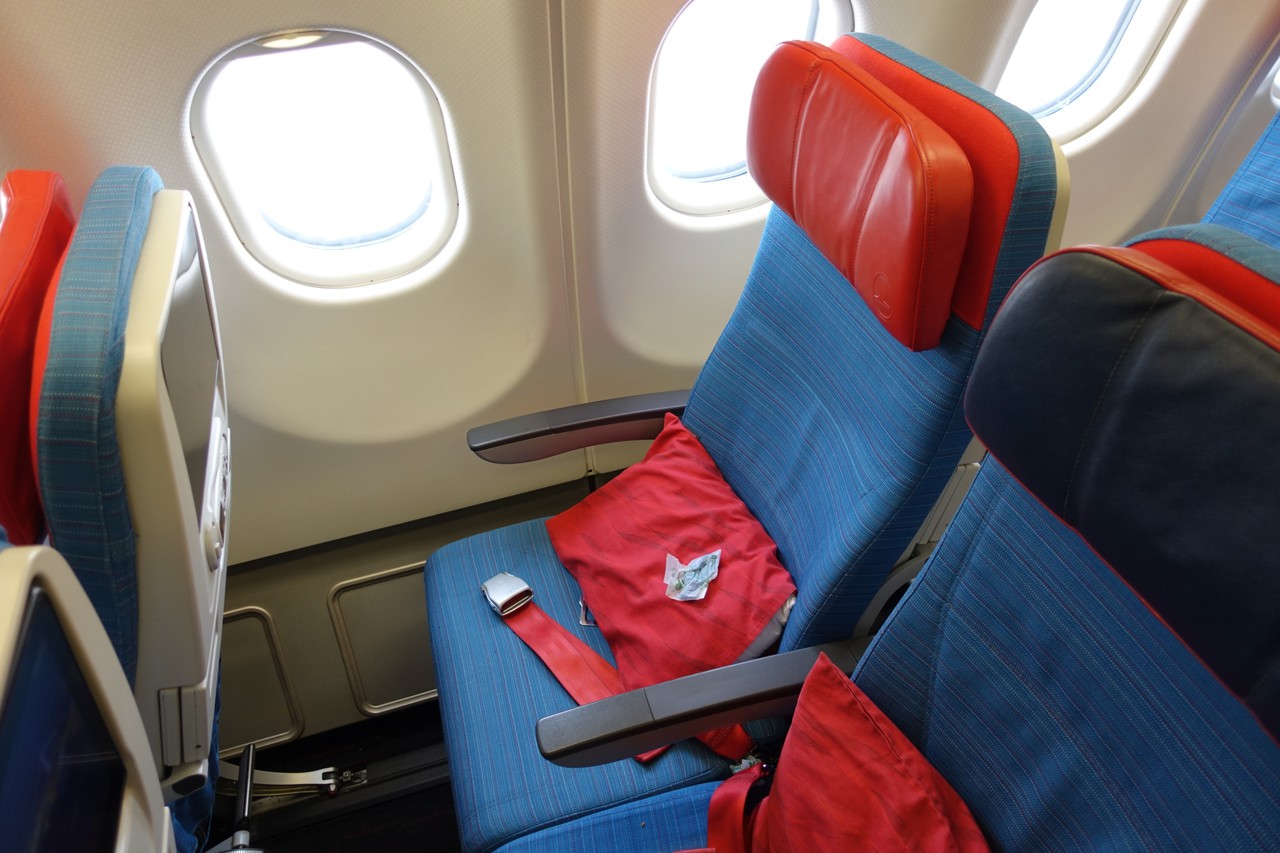 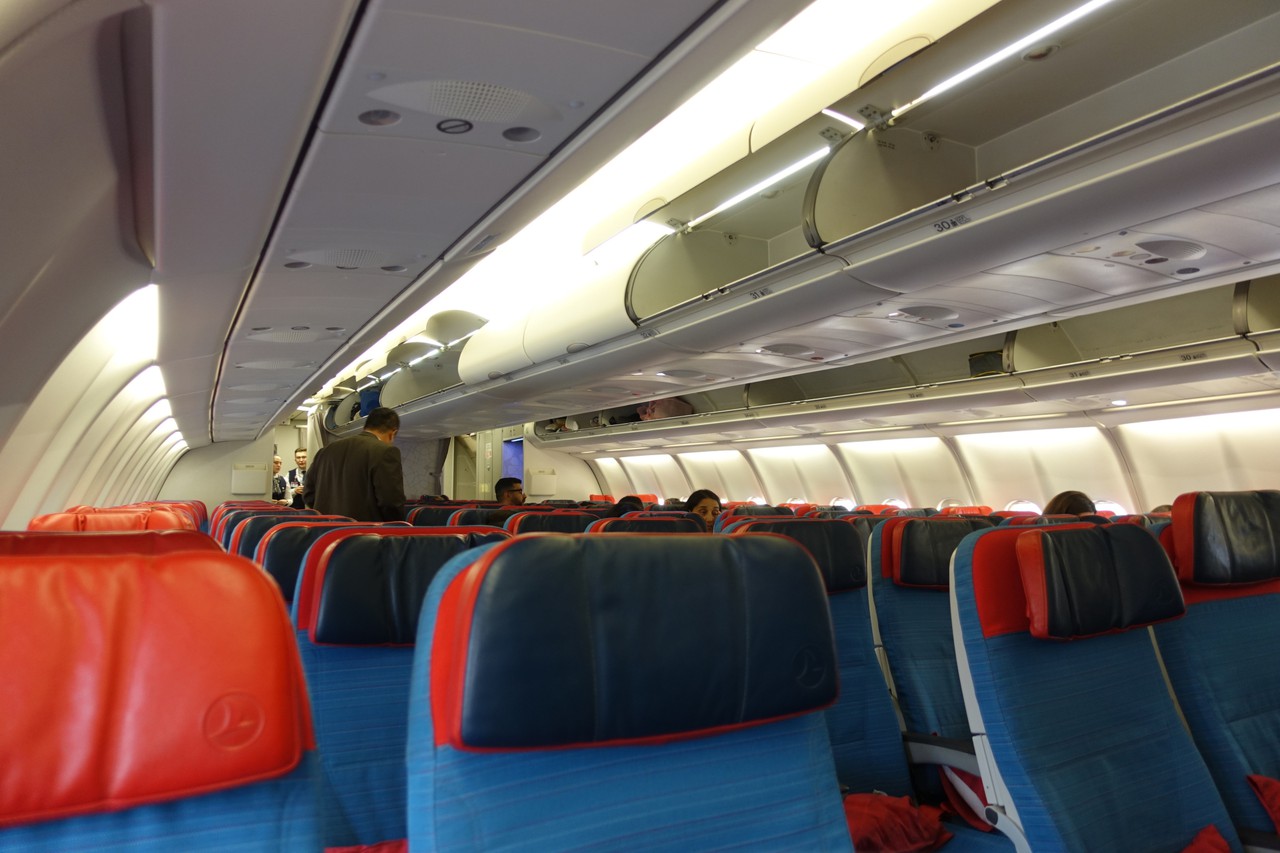 View outside my seat. 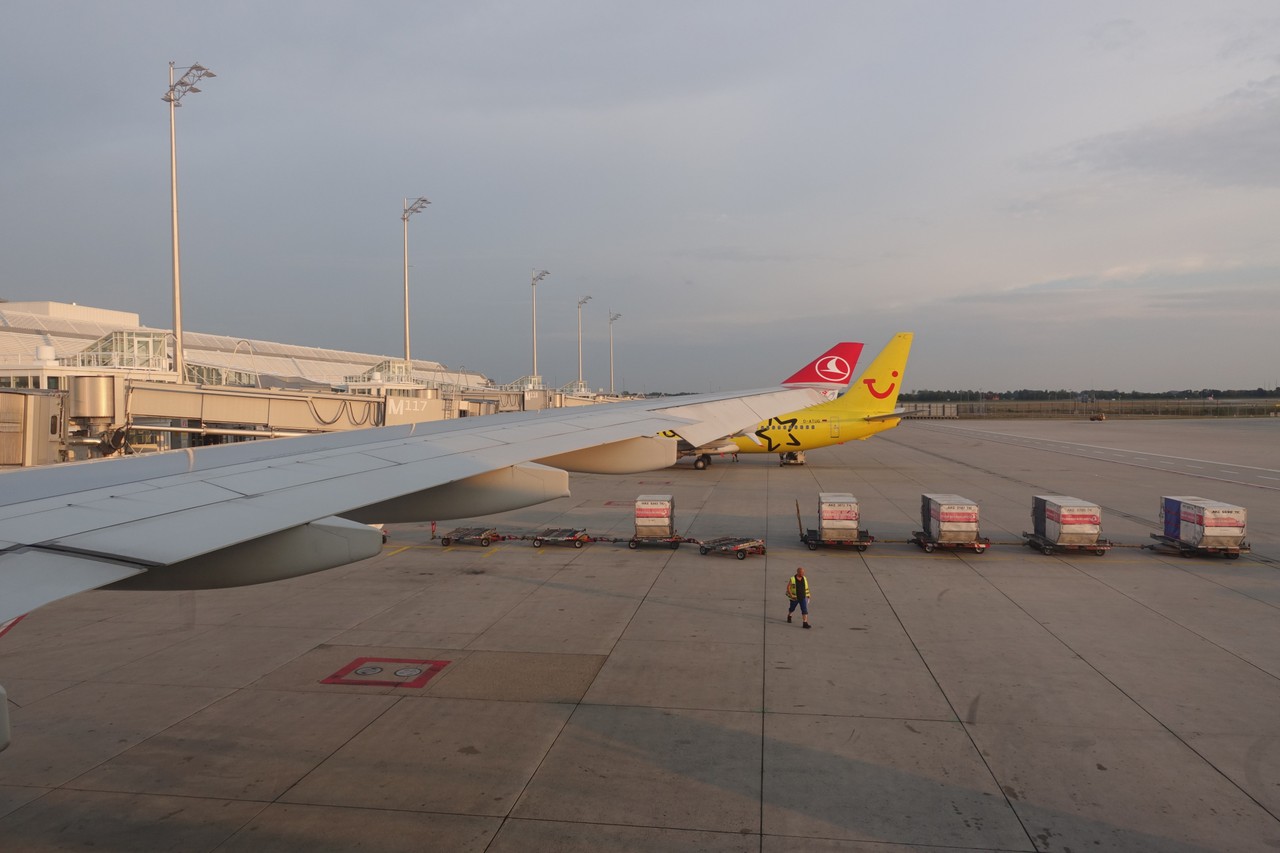 Back of the economy seat. A remote control was equipped below the monitor. Size of the monitor was also pretty good. 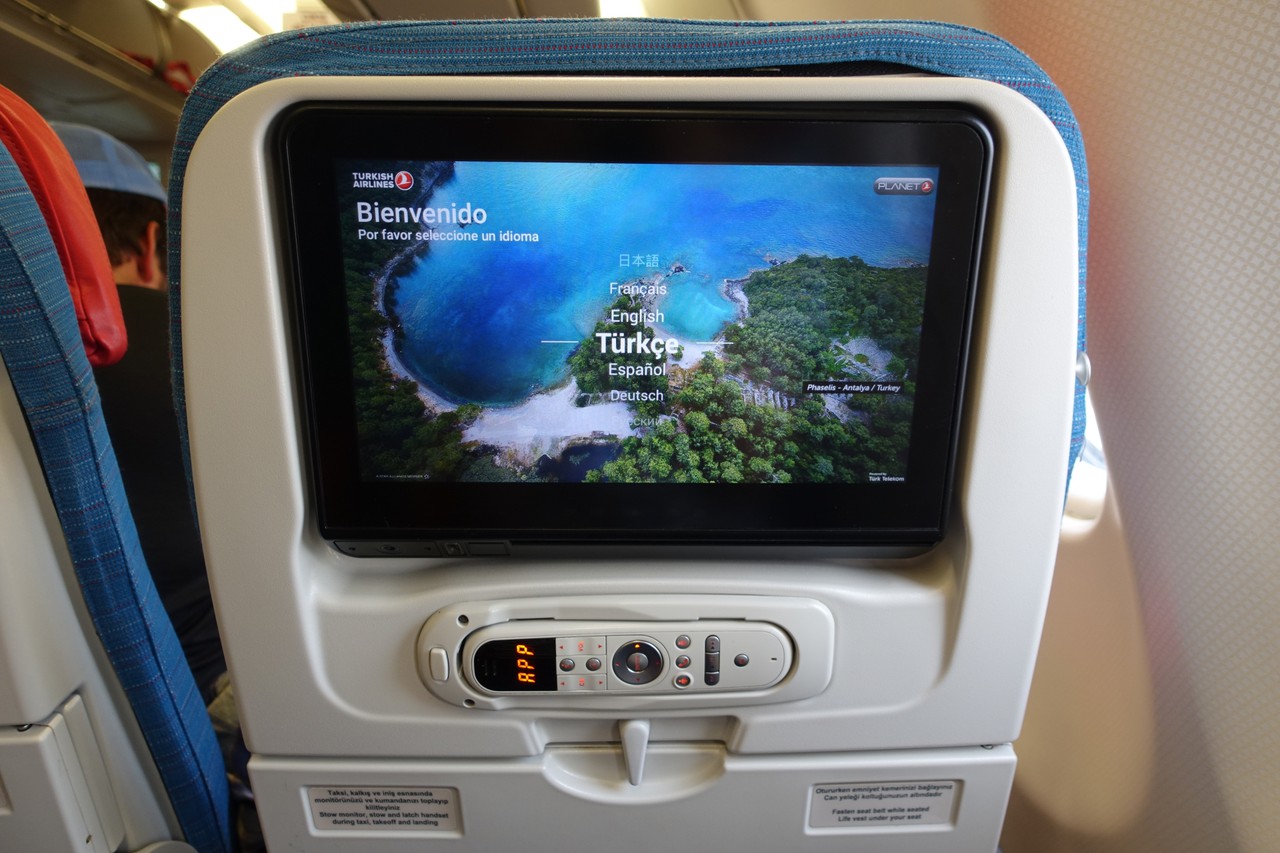 There was a footrest underneath the seat. 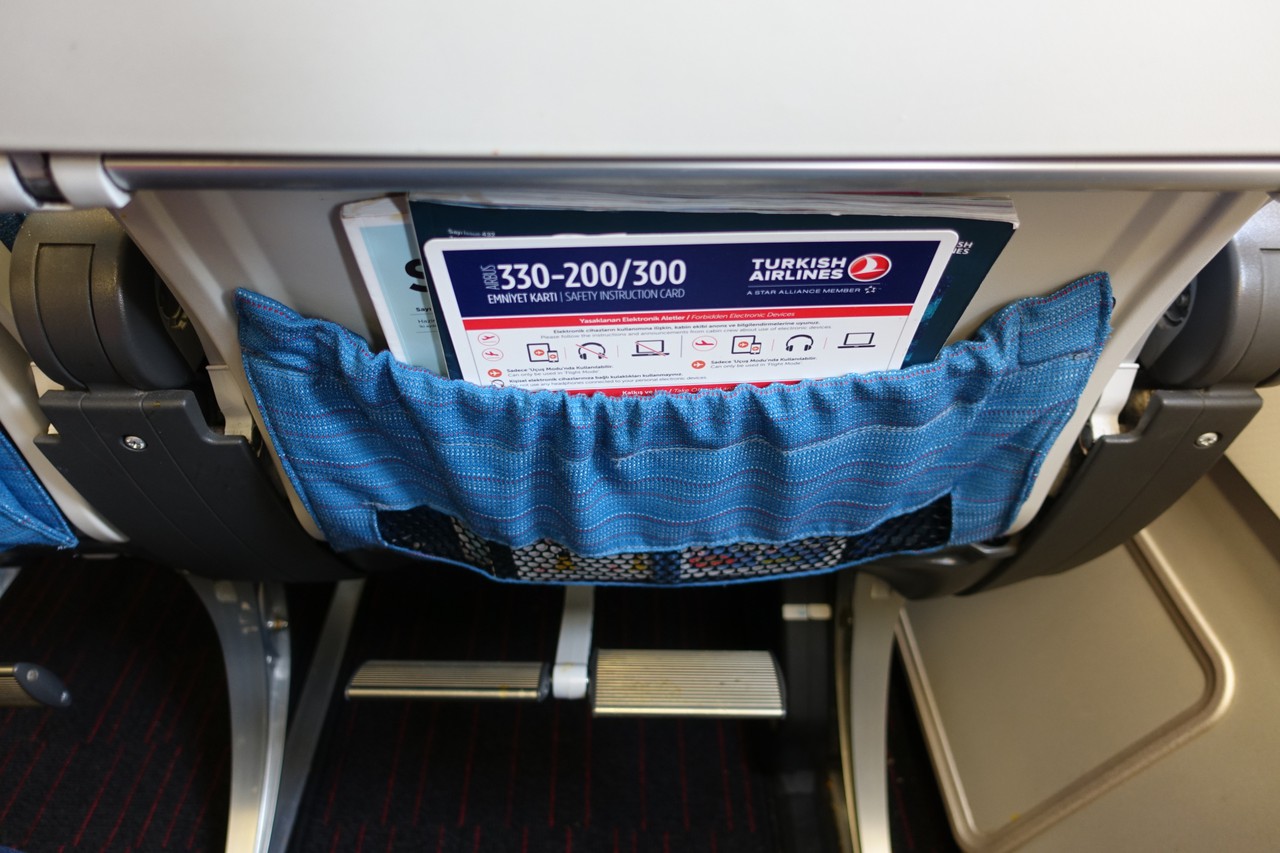 The main menu of the IFE. 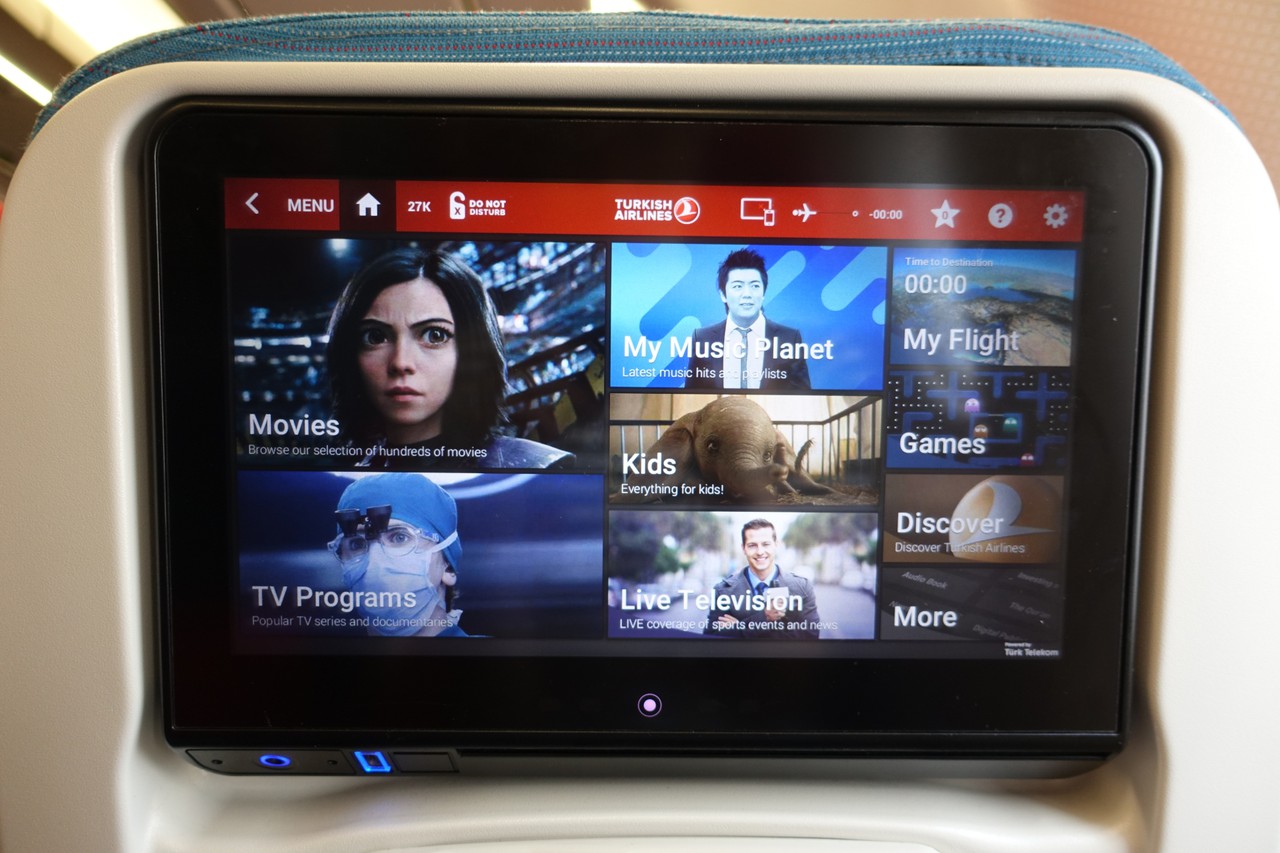 At 20:29pm, boarding was completed and there was a guy seating next to me. The flight as far as I could see, was completed fulled probably due to the starting of summer holiday. At the same time safety video was shown (The Lego Movie 2). Cabin light intensity was lower for the preparation of takeoff.

About 4 minutes later, pushback was commenced. 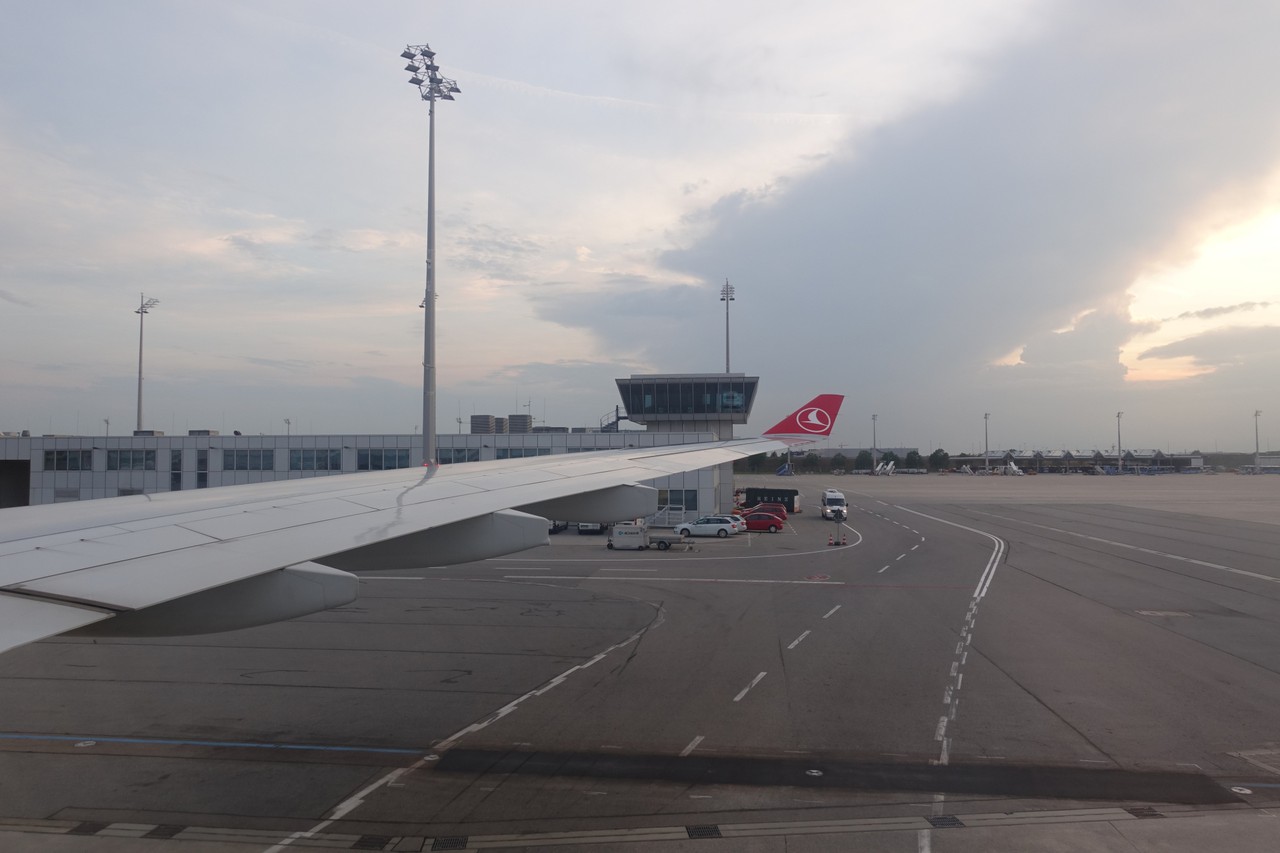 Taxing to the active runway. 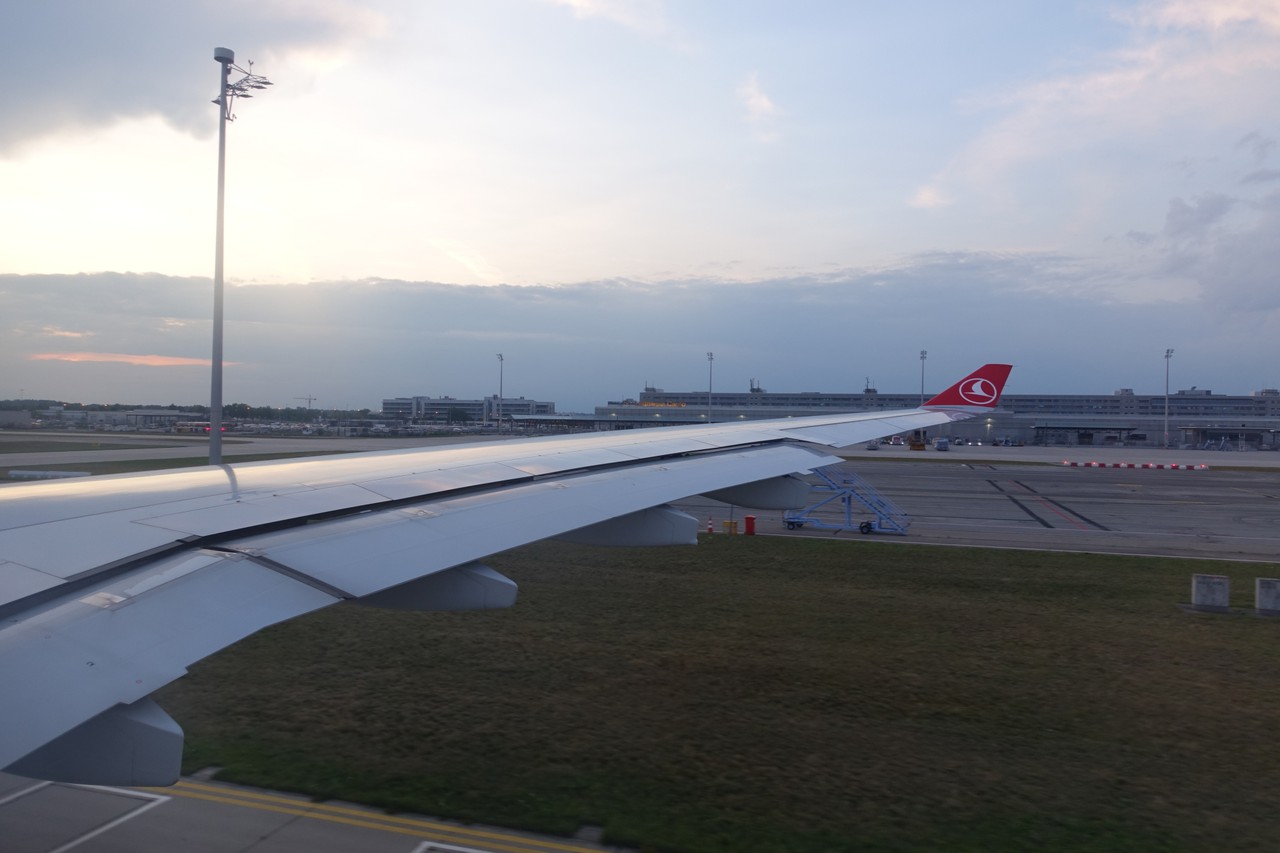 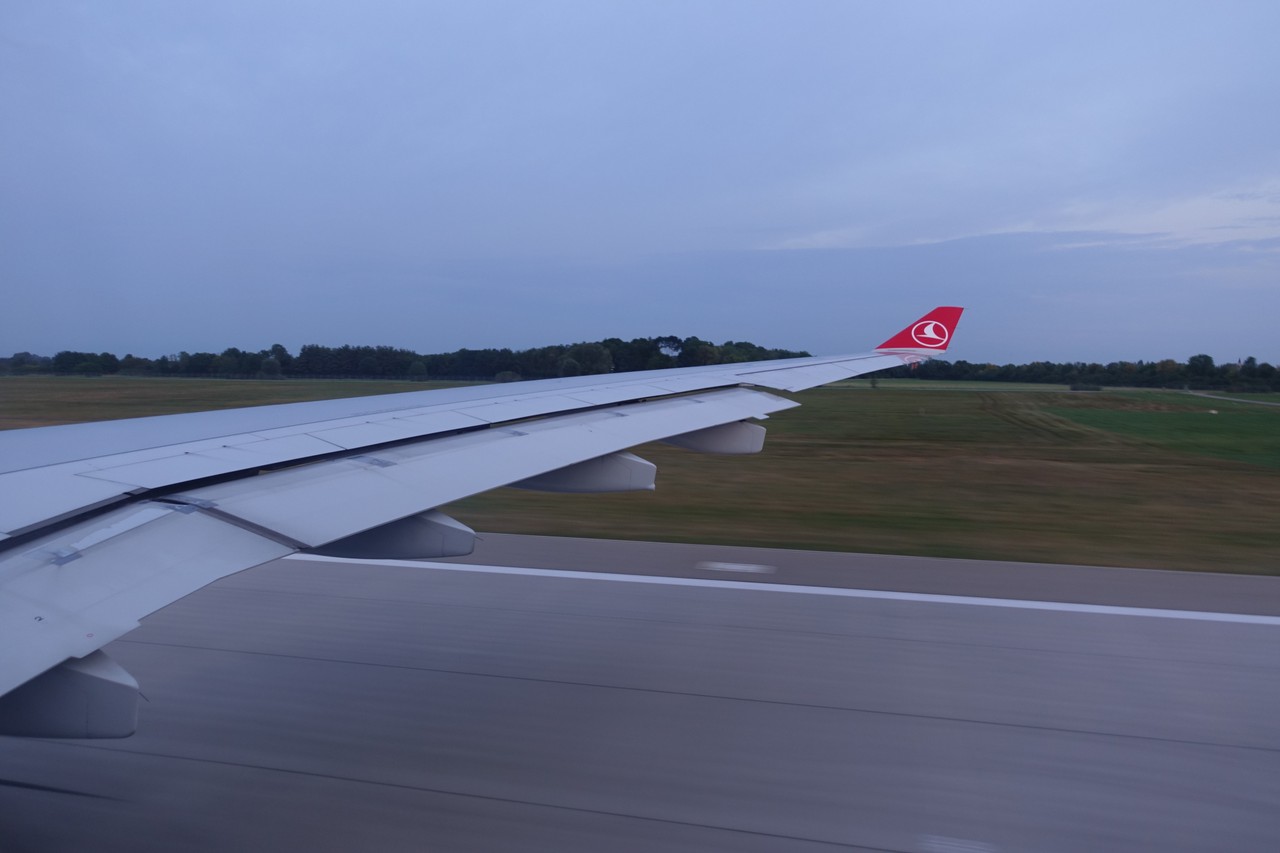 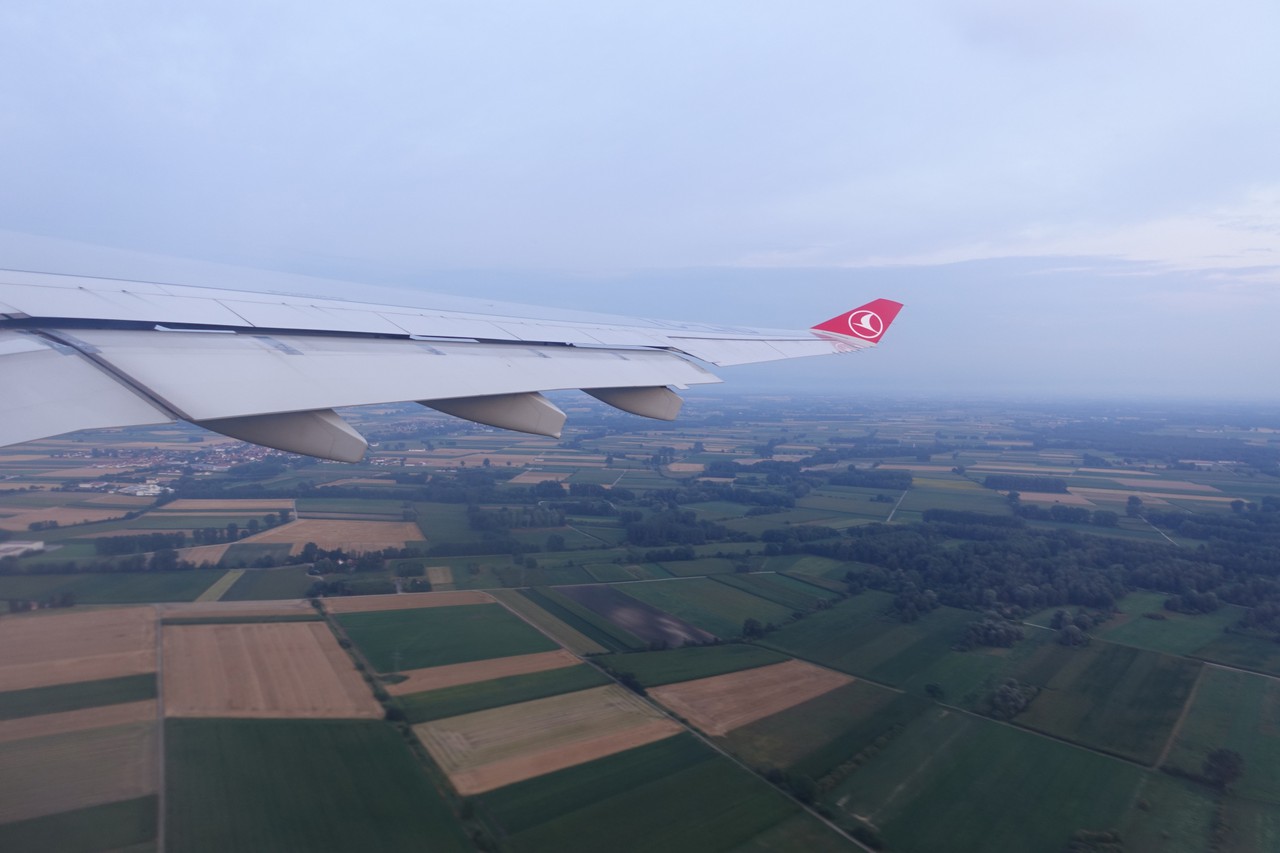 Winglet of Turkish Airlines A330. 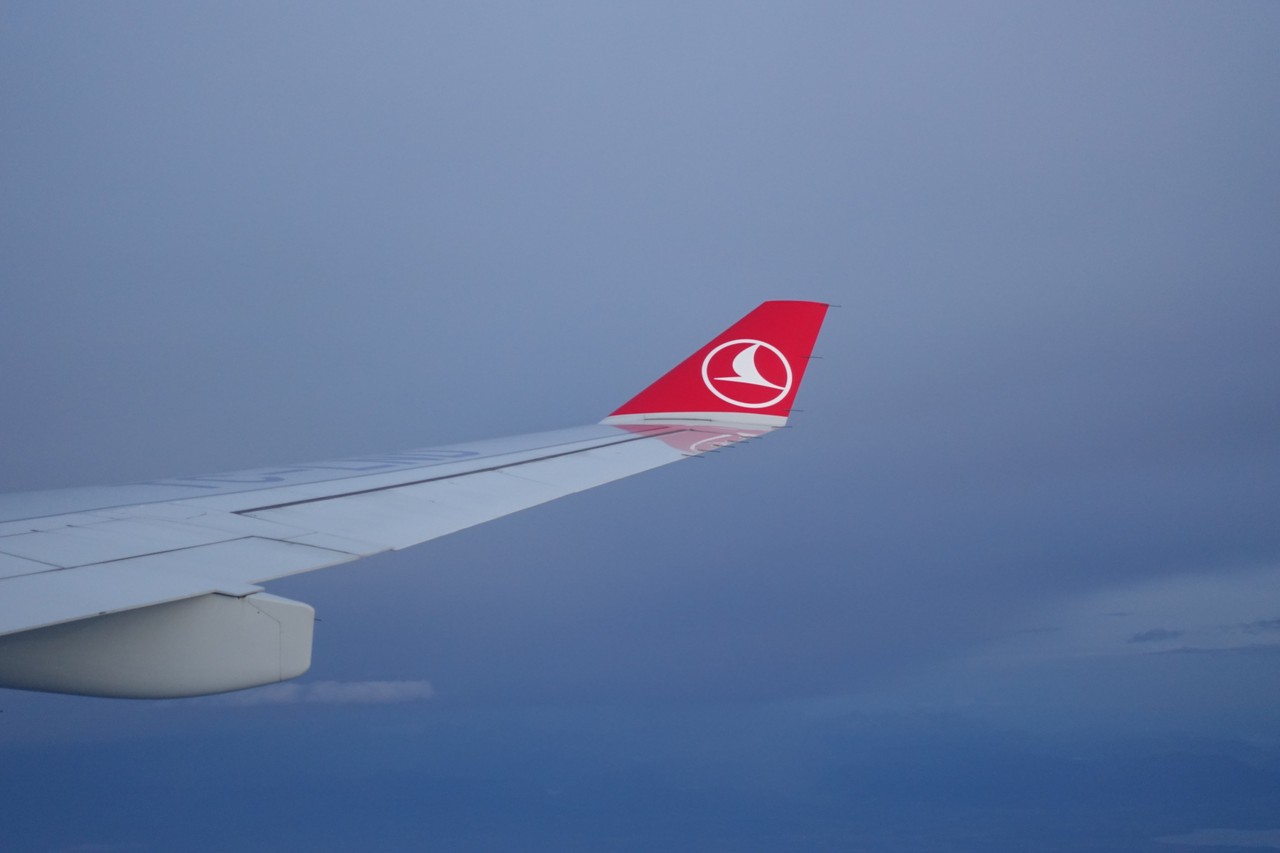 Twenty minutes after takeoff, I started to watch the Tomb Raider movie. 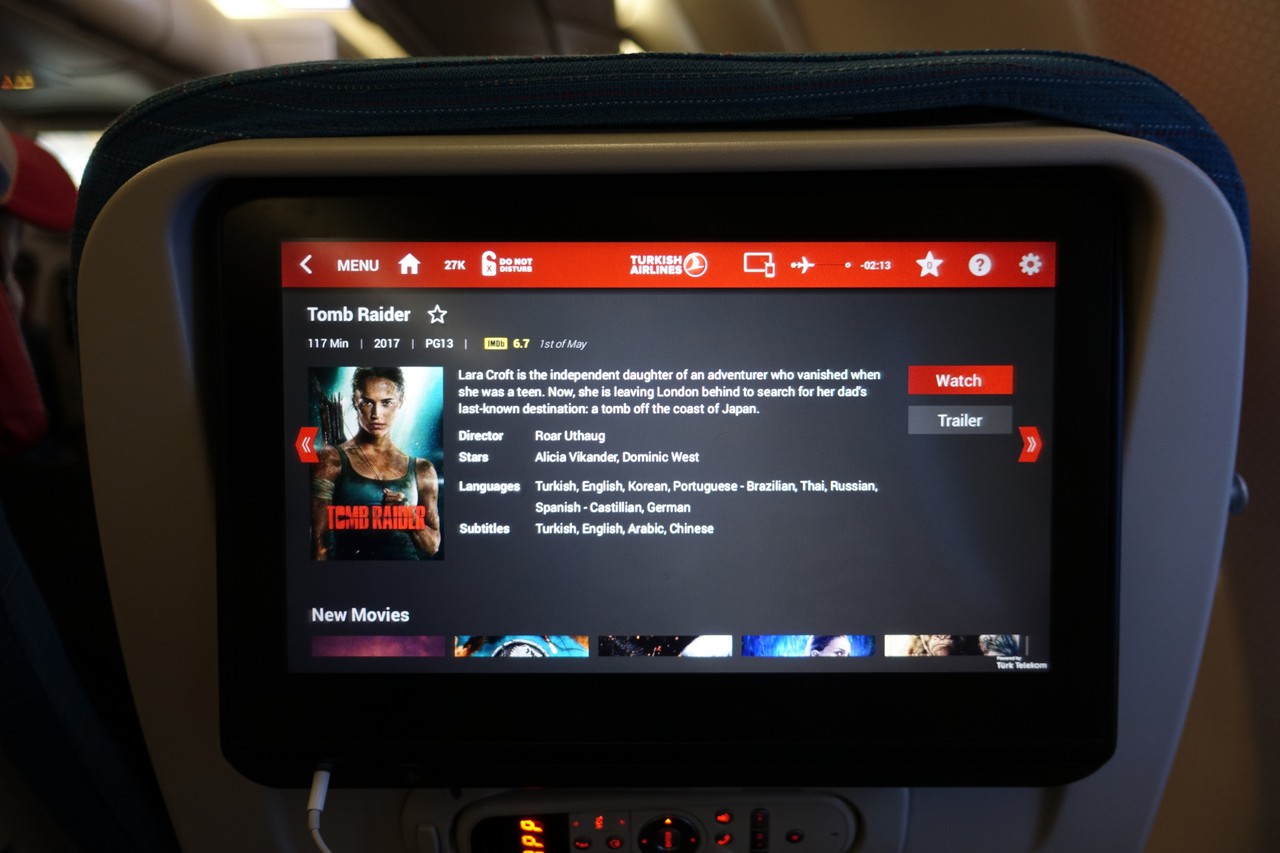 Soon, it was getting to get dark outside. 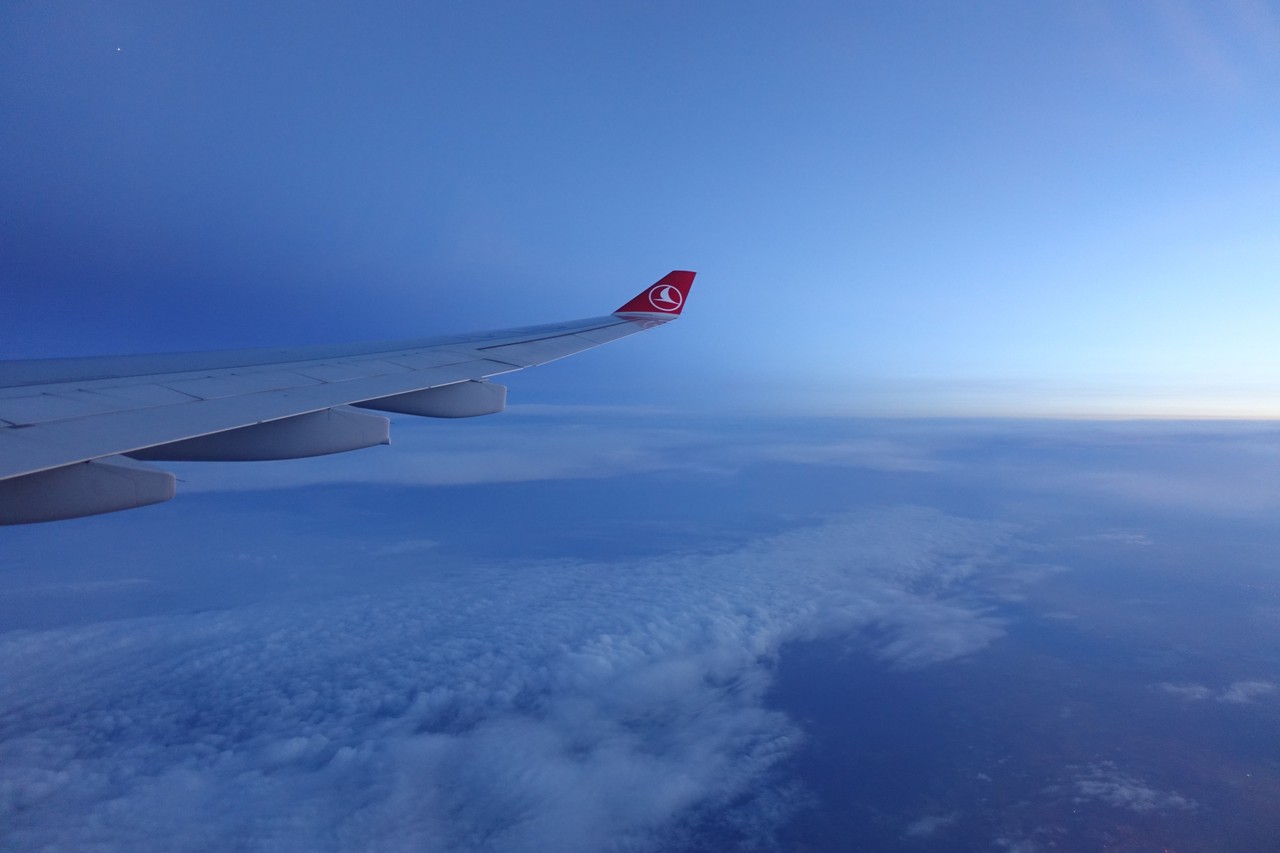 At 21:34pm, dinner was served and I decided to go with the chicken option, together with orange juice. The meal dish was quite good but I must say that the desert and the vegetable (salad?) was not my favorite. 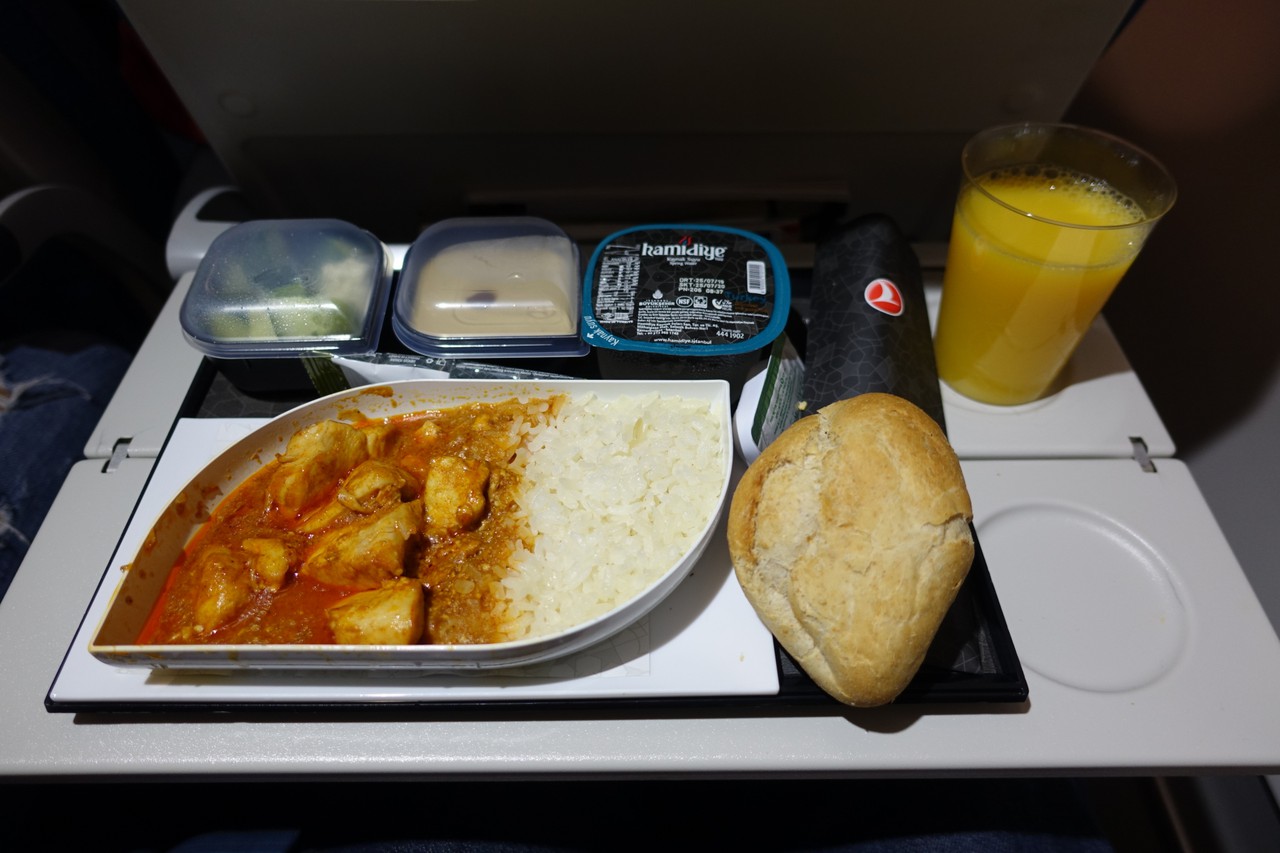 At 22:32pm, announcement from the cockpit informing that we had started to descend into Istanbul airport, landing would be approximately in 45 minutes. Then I took the last chance to visit the lavatory. 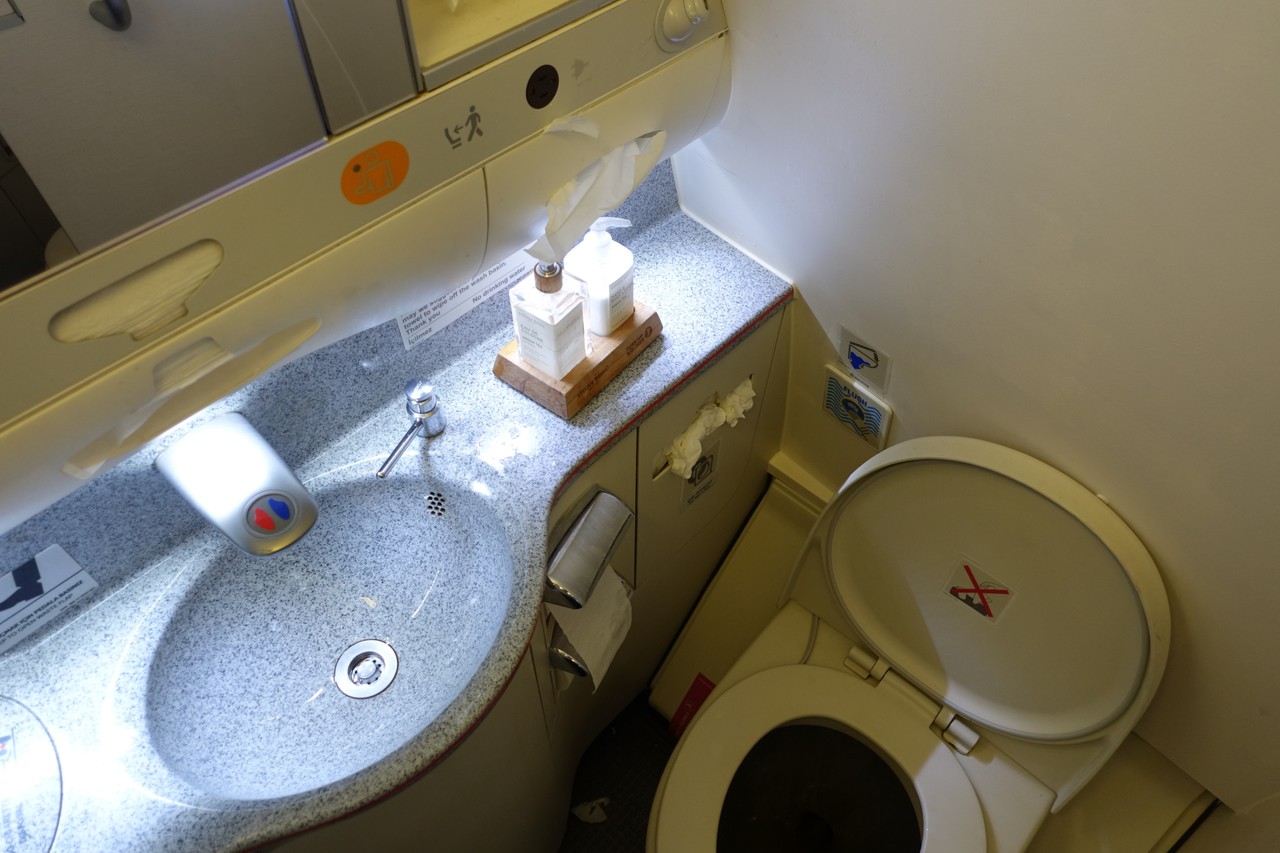 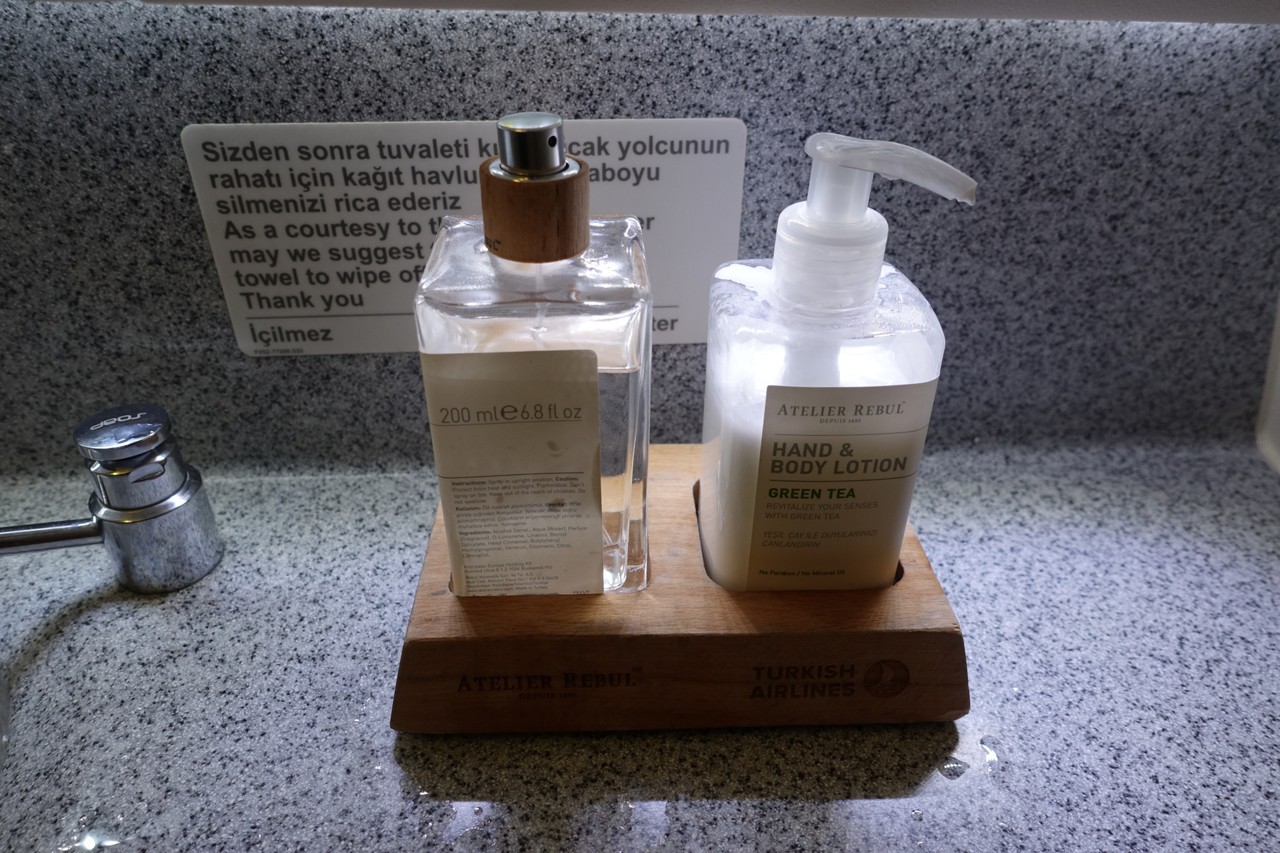 View of the rear cabin as I visited the lavatory. 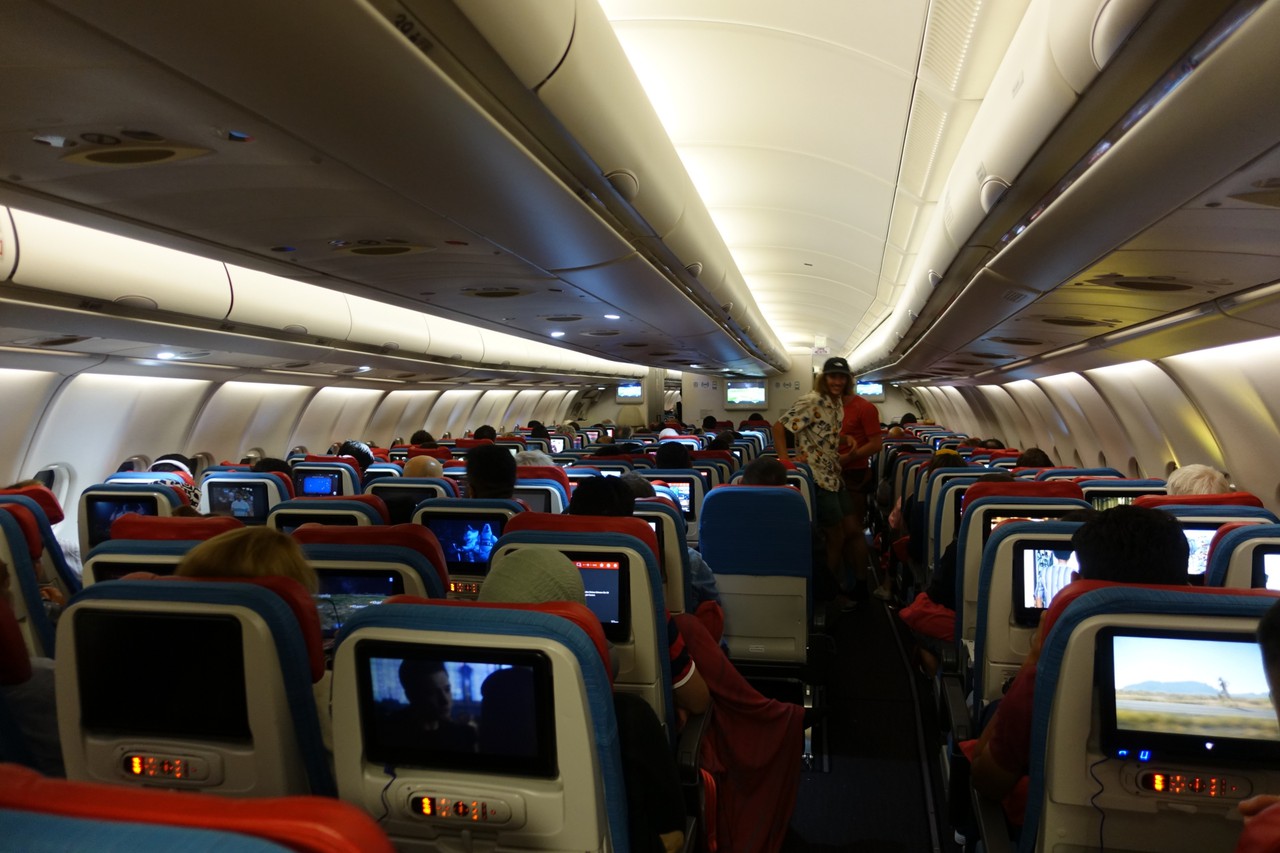 The flightmap indicated that we were almost reaching the destination. According to the flightpath, we passed through Czech, Slovakia, Romania, Bulgaria, and finally entering Turkey. 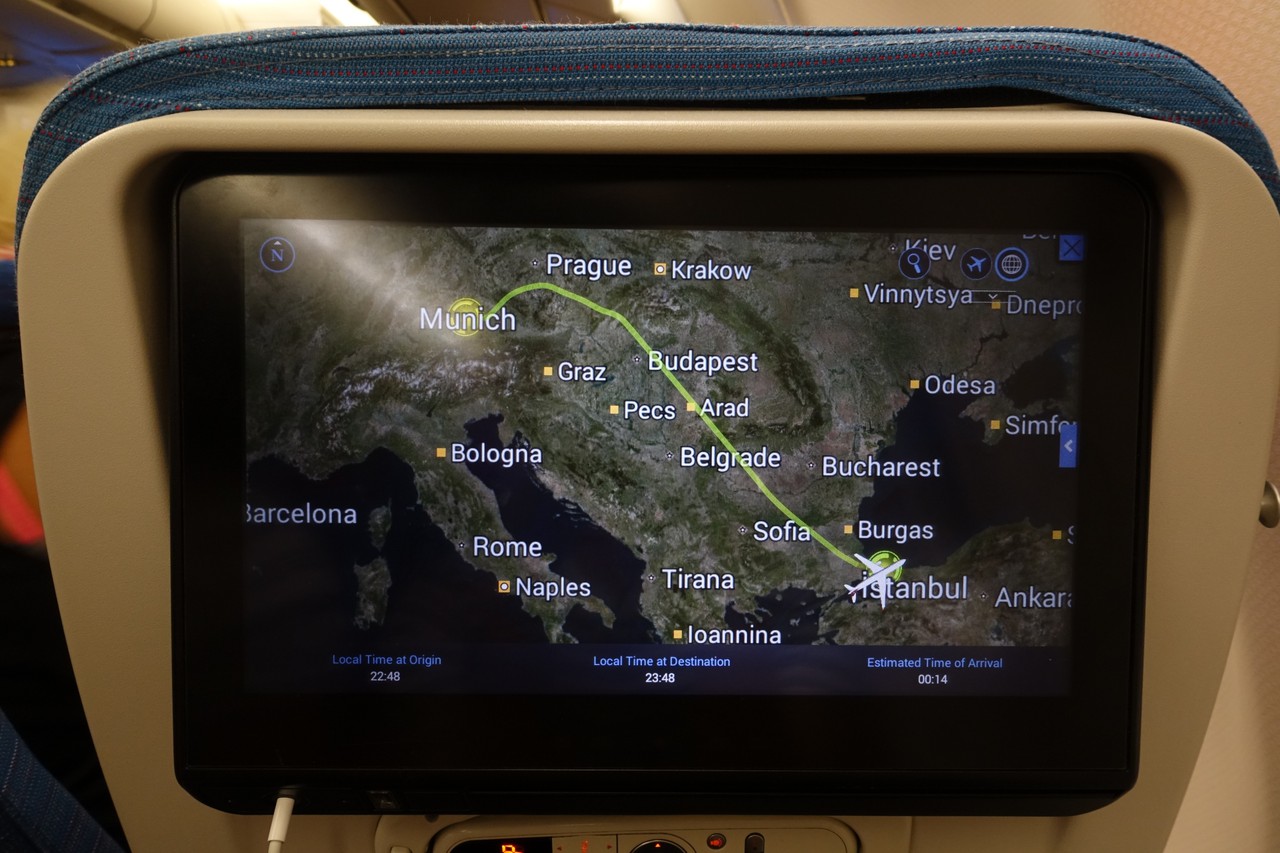 As we approaching Istanbul airport, the cabin light was turned off for landing. I was able to enjoy the night view of the Istanbul city. 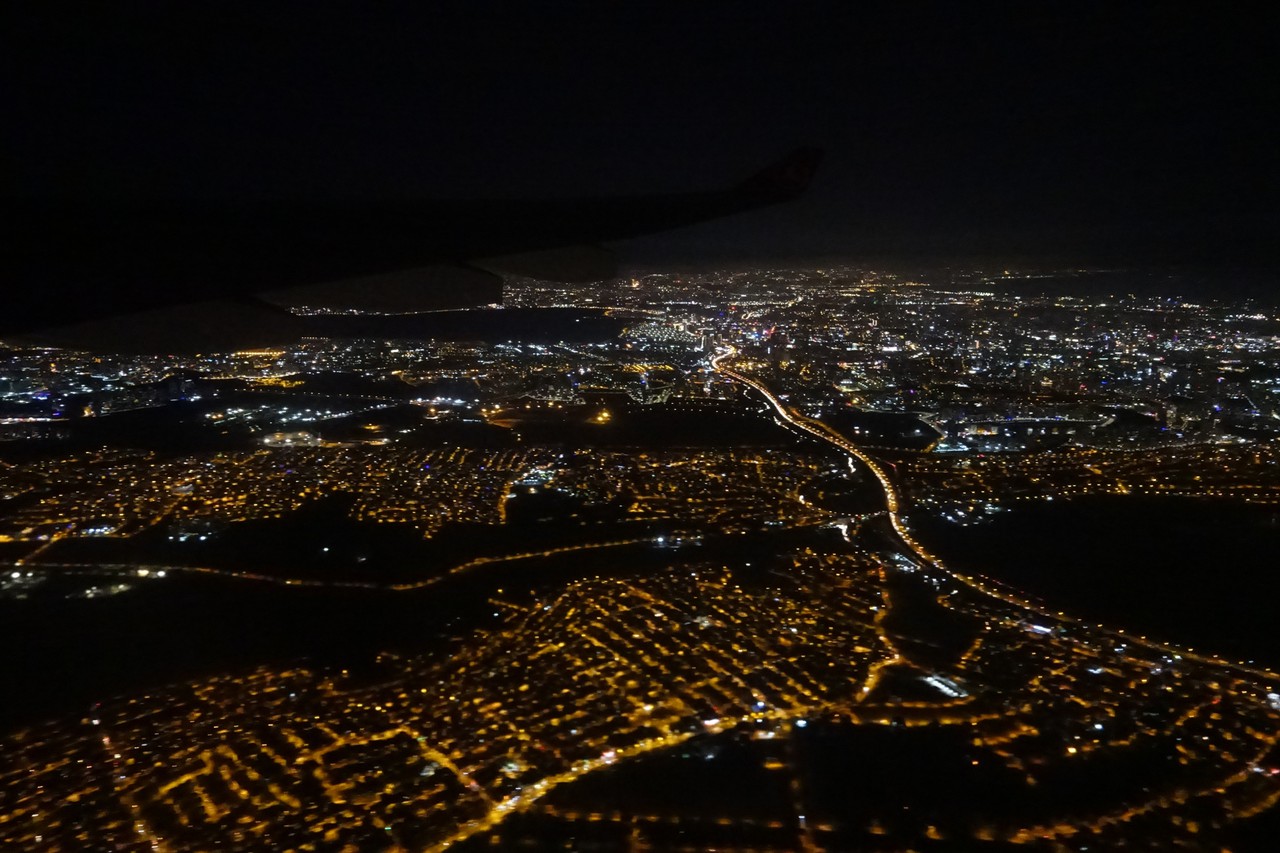 At 0:12am local time, we landed on RWY34R (Not sure if it was 34L). Total flight time was 2 hours and 20 minutes. After landing, it took about 15 minutes until we reached our parking gate A2. Because of the delay, I had less than 10 minutes until the next boarding. Thanks for reading!

The flight experience was indeed very good from the European airlines standard. Although it did not affect my overall trip, delaying for two hours is always bad for transit which is always making me nervous.