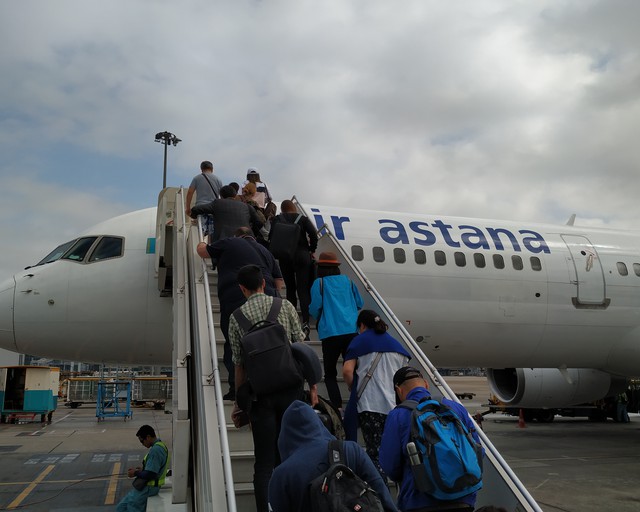 This was a flight I had been really looking forward to get onboard after my booking. Though the 757 series may looks familiar, if not too common to most of the European or American countries, but it is extremely rare in the Asia, if not the only regular flight serving with scheduled 757s in Hong Kong. I had not getting many chance to ride on this little rocket plane, and this was my first time riding a 757. The flight was great, what I mean was the take-off experience and sound from engine roaming, though I was expecting more than that, the feeling on a 757 was quite ordinary as the common planes like the A321, but it was still an interesting moment to fly with a 90s aircraft.

I had struggled for choosing QR/KC to my final destination —- Istanbul. Though the reputation of QR is better may it seems, and I have no use with the miles earned from KC, but I guess it will be a great opportunity to get try on one of the rapidly emerging careers in the central Asia —- Air Astana, so I decided to pick this flight despite the time slot is really inconvenience for me as a tourist, and flying narrow-body jets to Europe for 12 hours will be a shame (I don't know?). While most of my friends may not even heard for this Airline company, but hopefully Air Astana didn't disappoint me, even gave me some surprises. 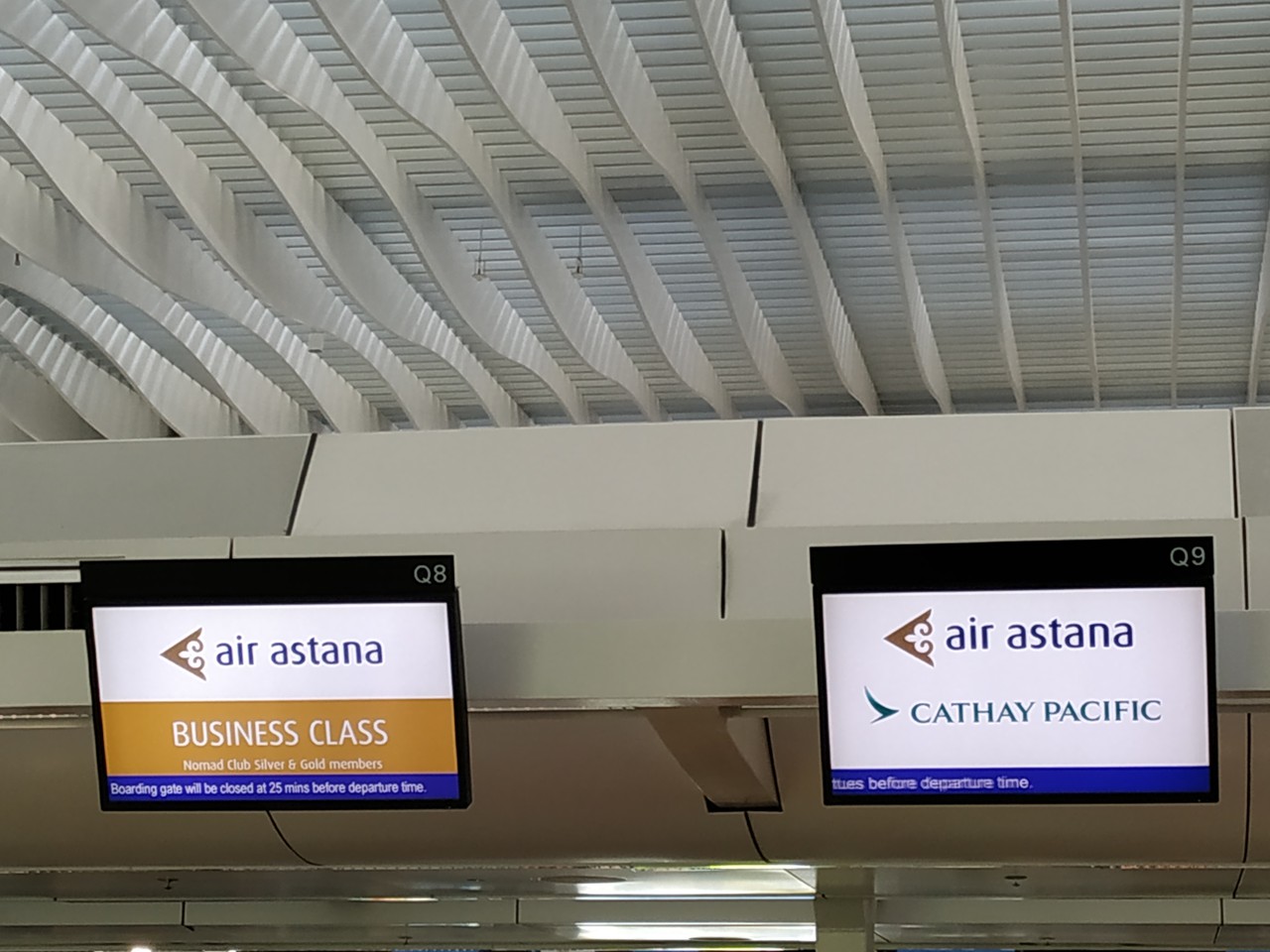 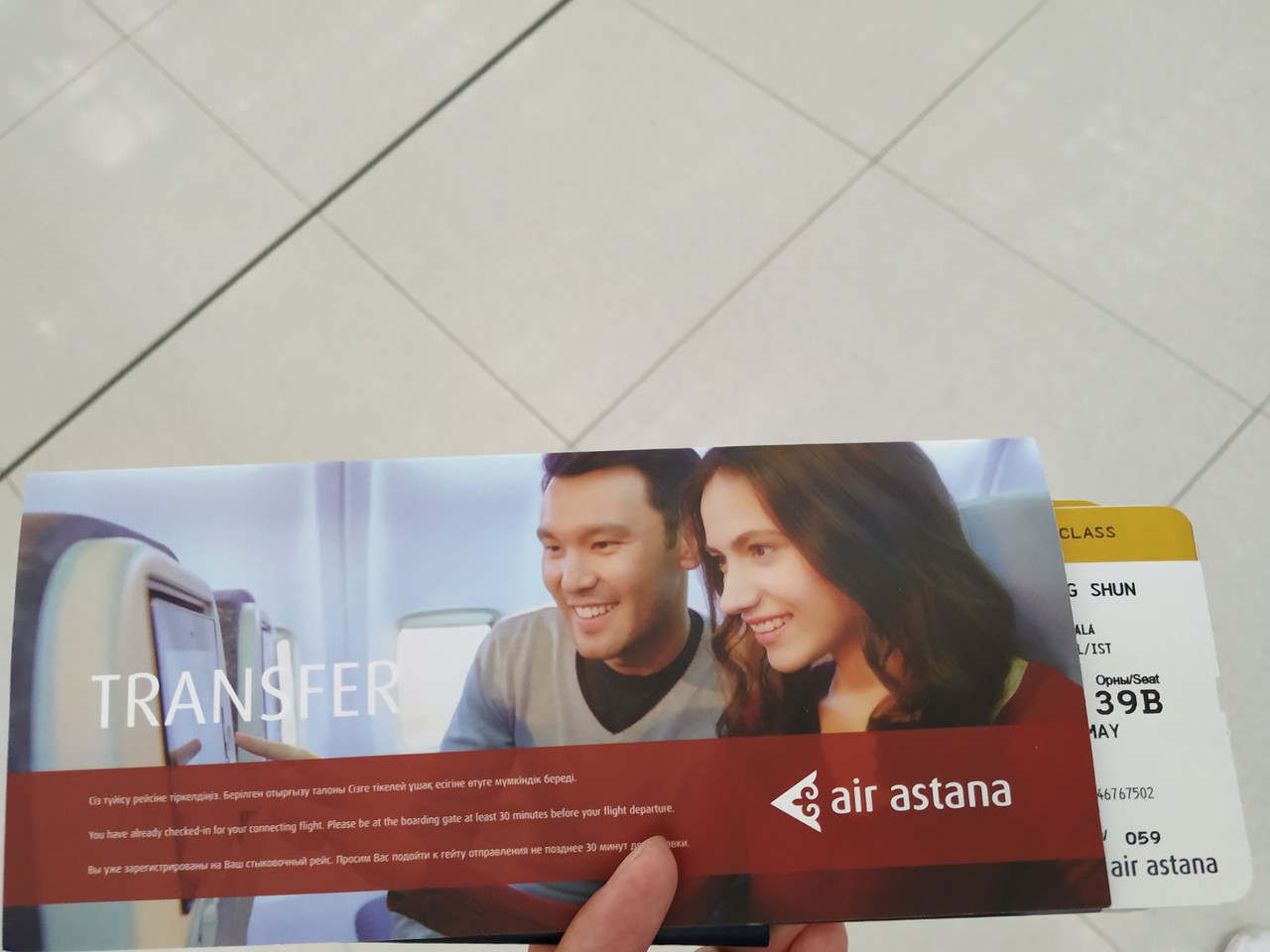 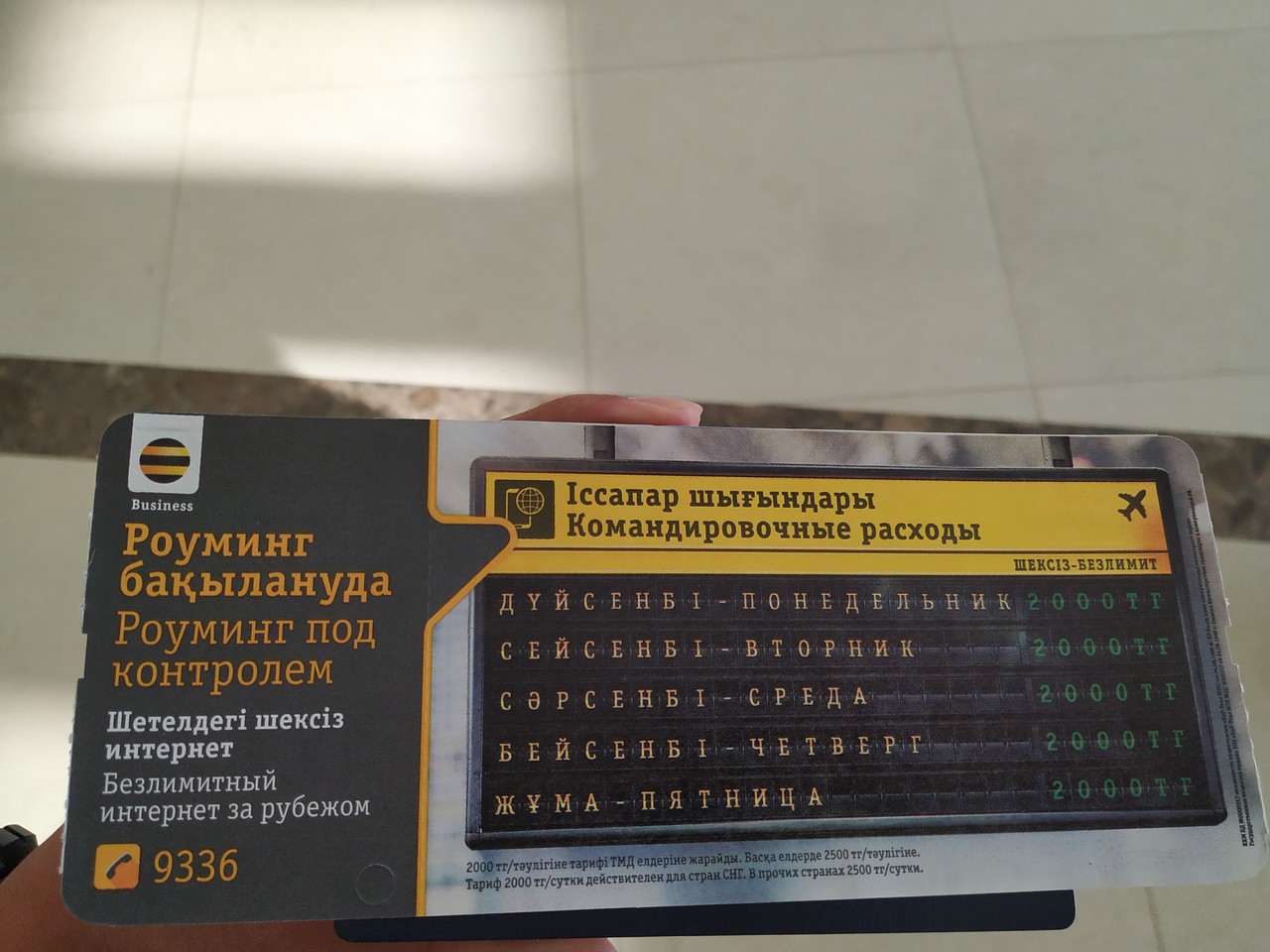 The check-in counter is located in the main terminal (Terminal 1) of Hong Kong International Airport, the queue was quite long despite I had arrived 2 hrs prior to departure, my flight was code-shared with Cathay Pacific, carrying transfer passengers from other parts of Asia, as the direct flight to Kazakhstan are very limited in countries near-by. I received two tickets KC930/KC911, the ticket design was pretty cool, with advertisements on the back of it(?). 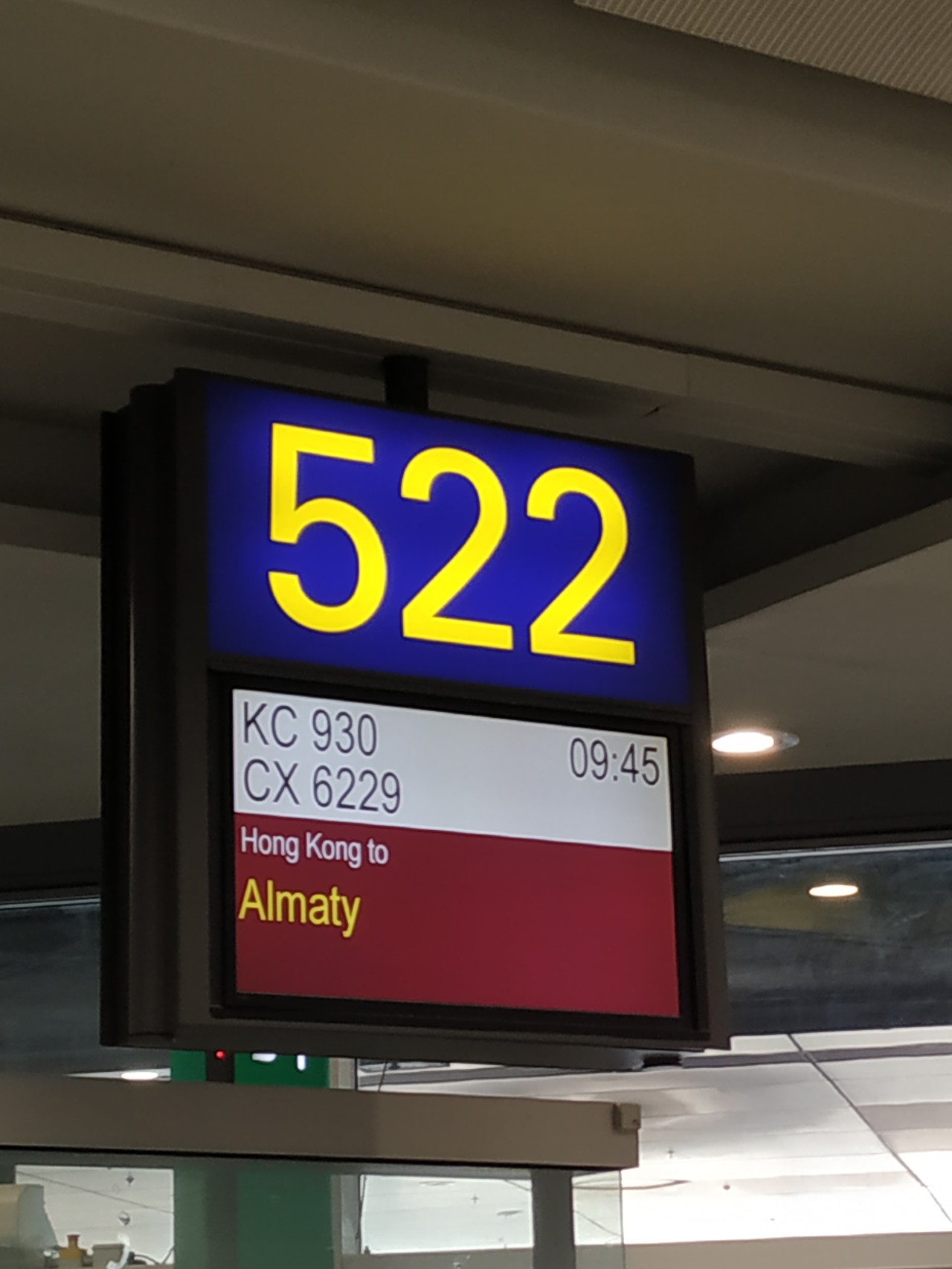 After taking the terminal-train to the boarding gate, the boarding started timely on 0905 and I found that this will be an outer bay boarding. 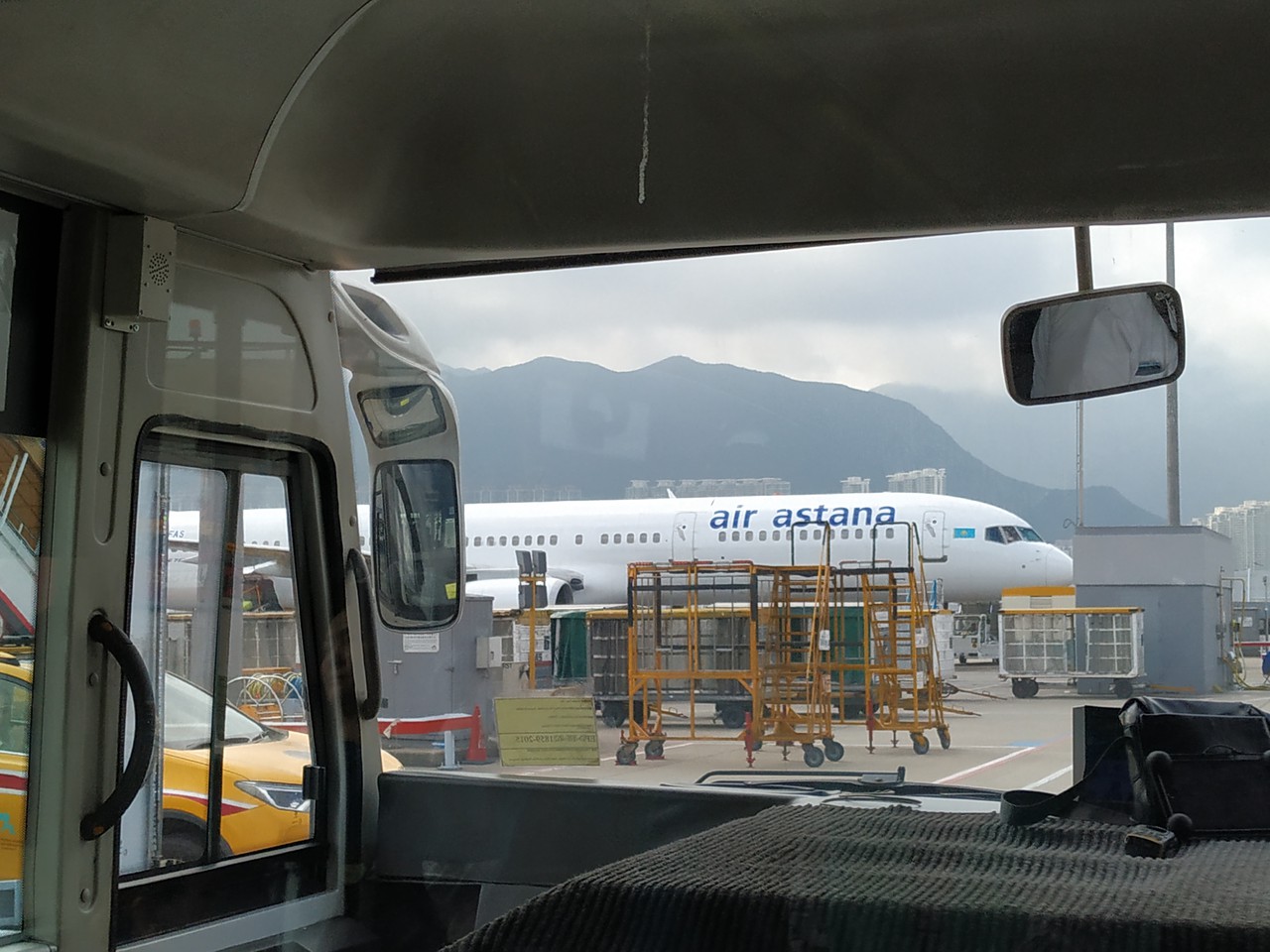 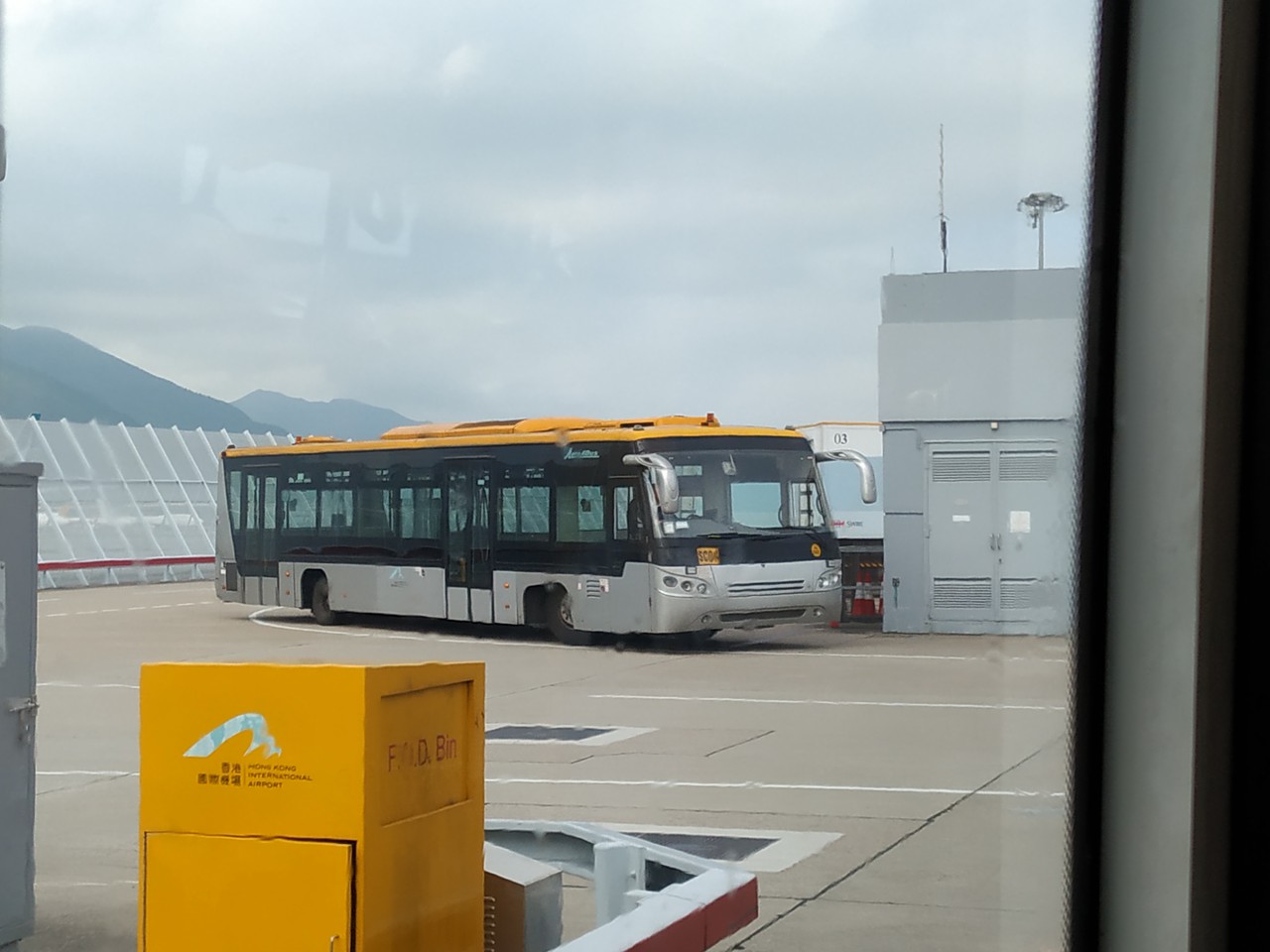 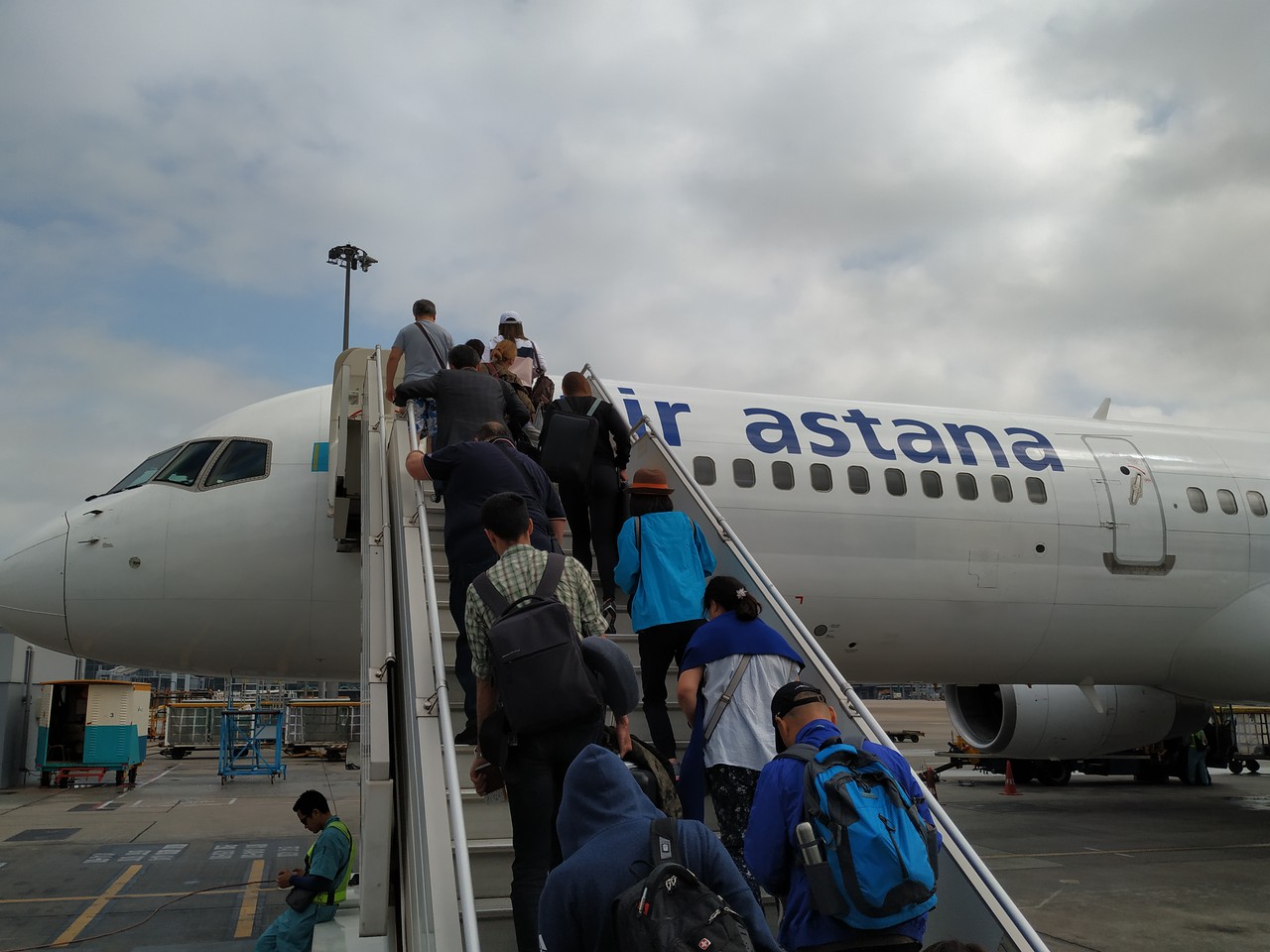 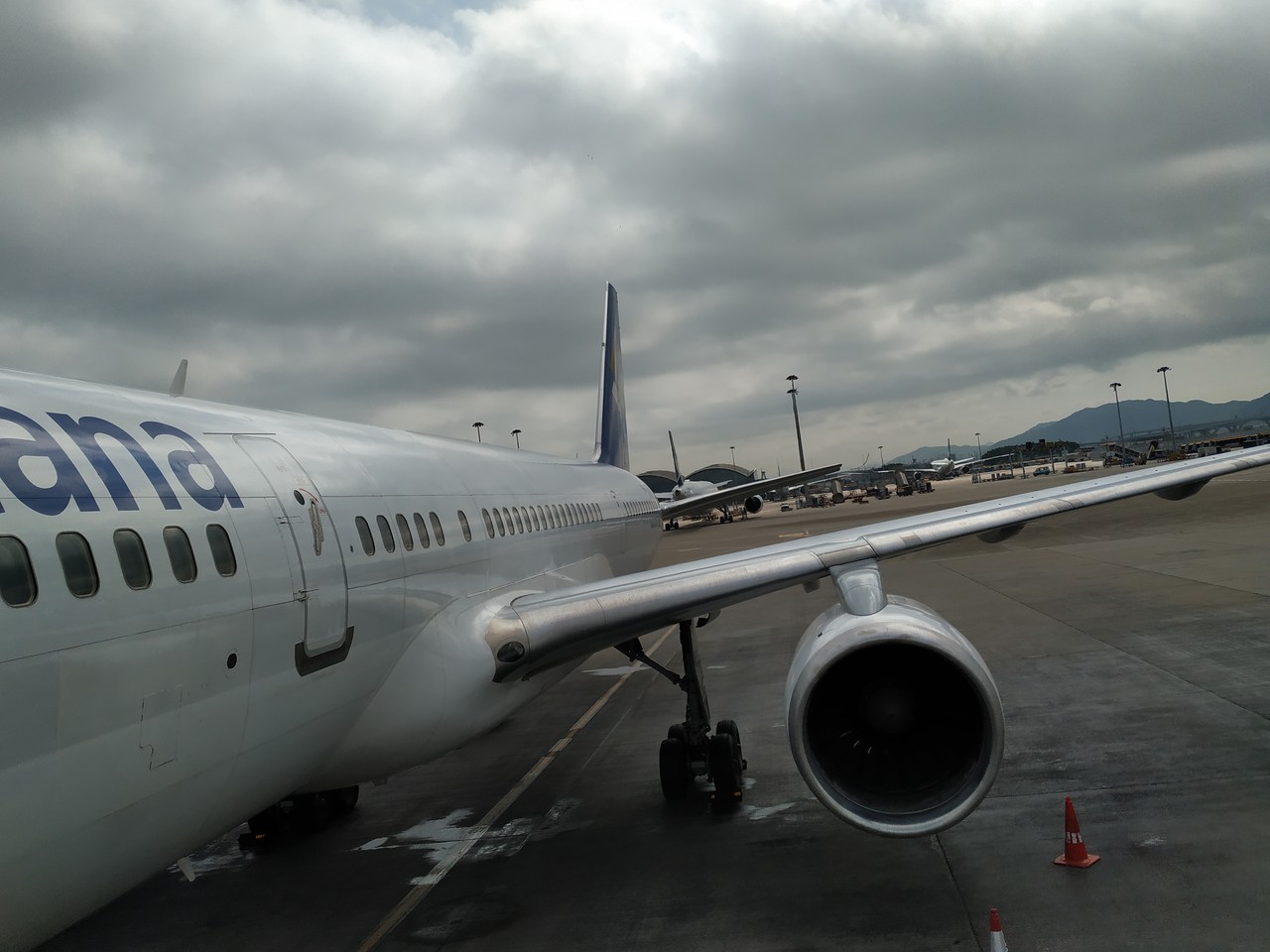 The bus brought us to the outer bay, and soon we saw the aircraft carrying us on that day. What a 757! I took several shots on my plane immediately. 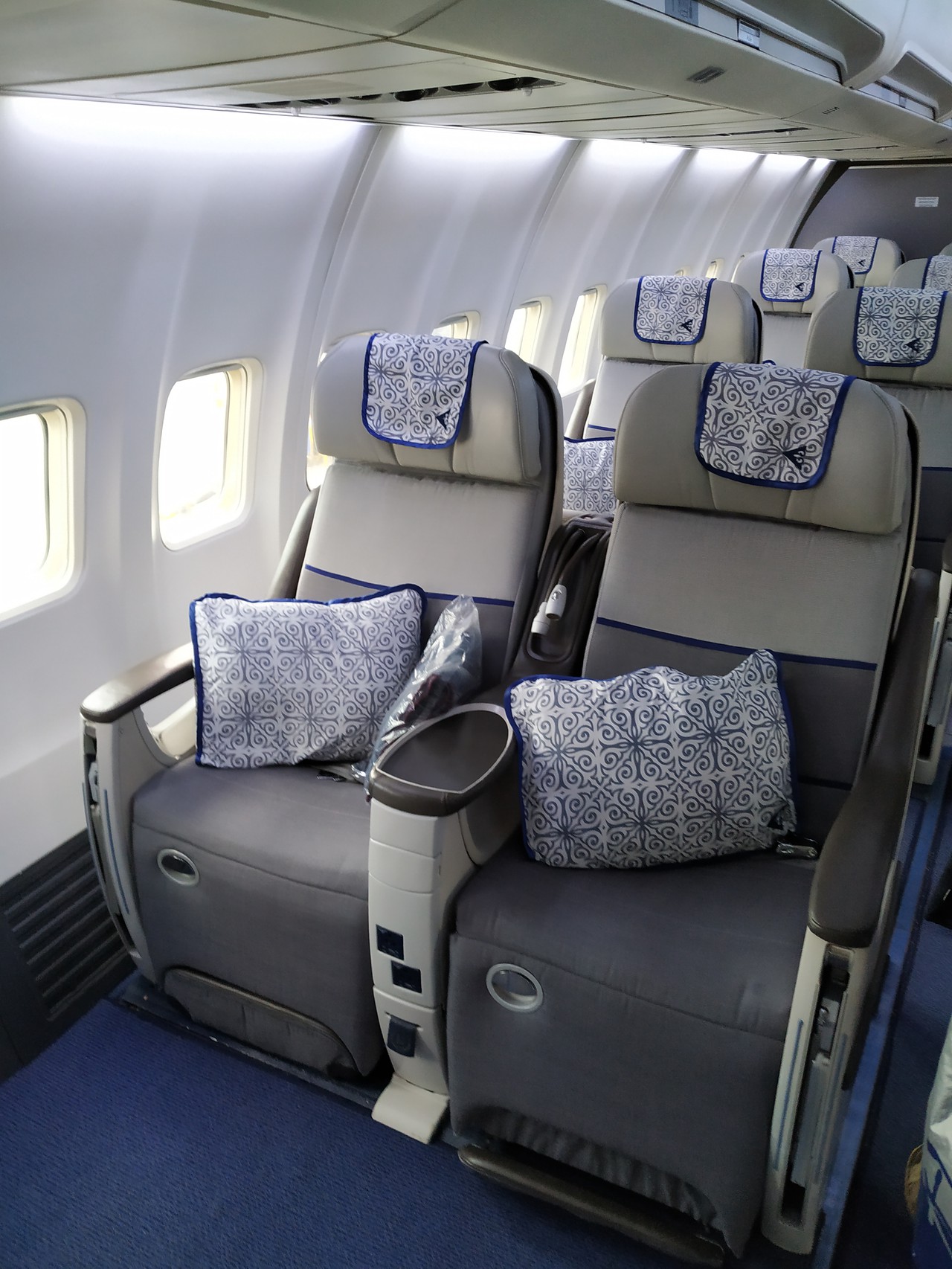 The business class of the 757-200 from Air Astana, this looks like a regional J-class product, it is quite different from my 767-300ER return flight. 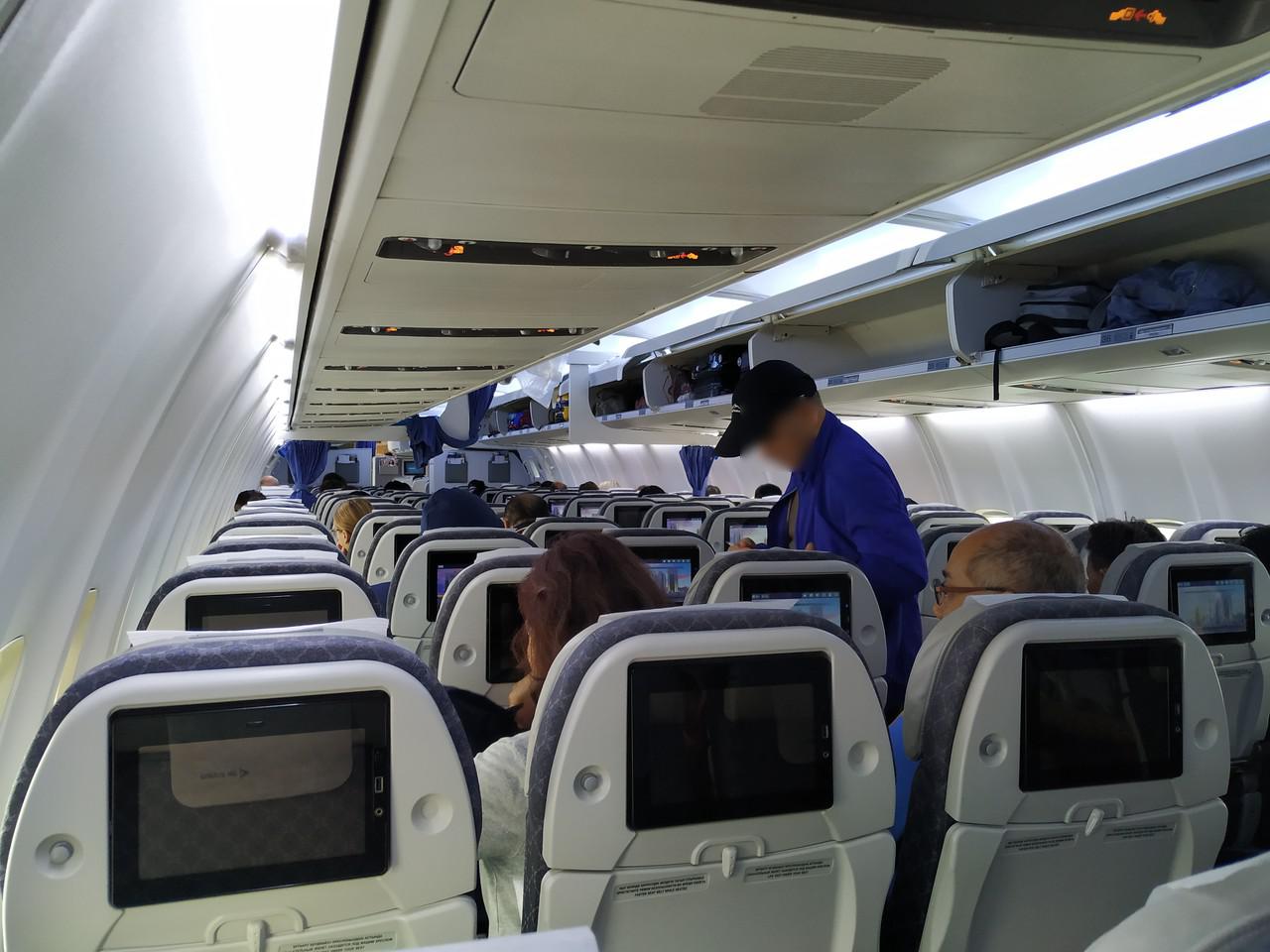 Soon I took my seat, which was located in the rear part of my sub-cabin, that means I could slide down my seat without disturbing my neighbors. 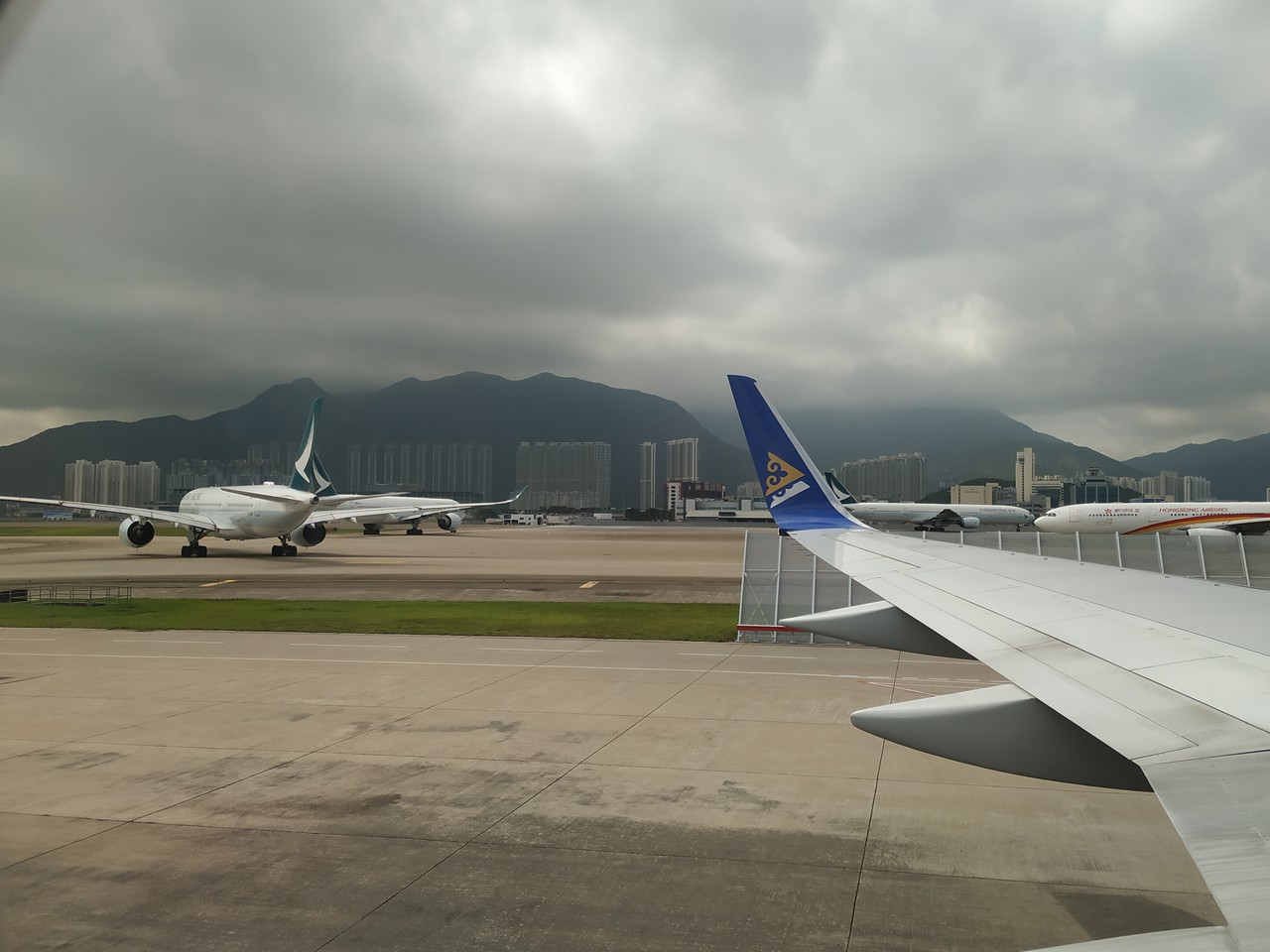 Preparing for take-off, along with few aircraft from Cathay Pacific and Hong Kong Airlines.

The loading of this flight was unexpectedly full, I couldn't see any empty seats, I guess most of them were transit passengers to different areas in the central Asia regions. 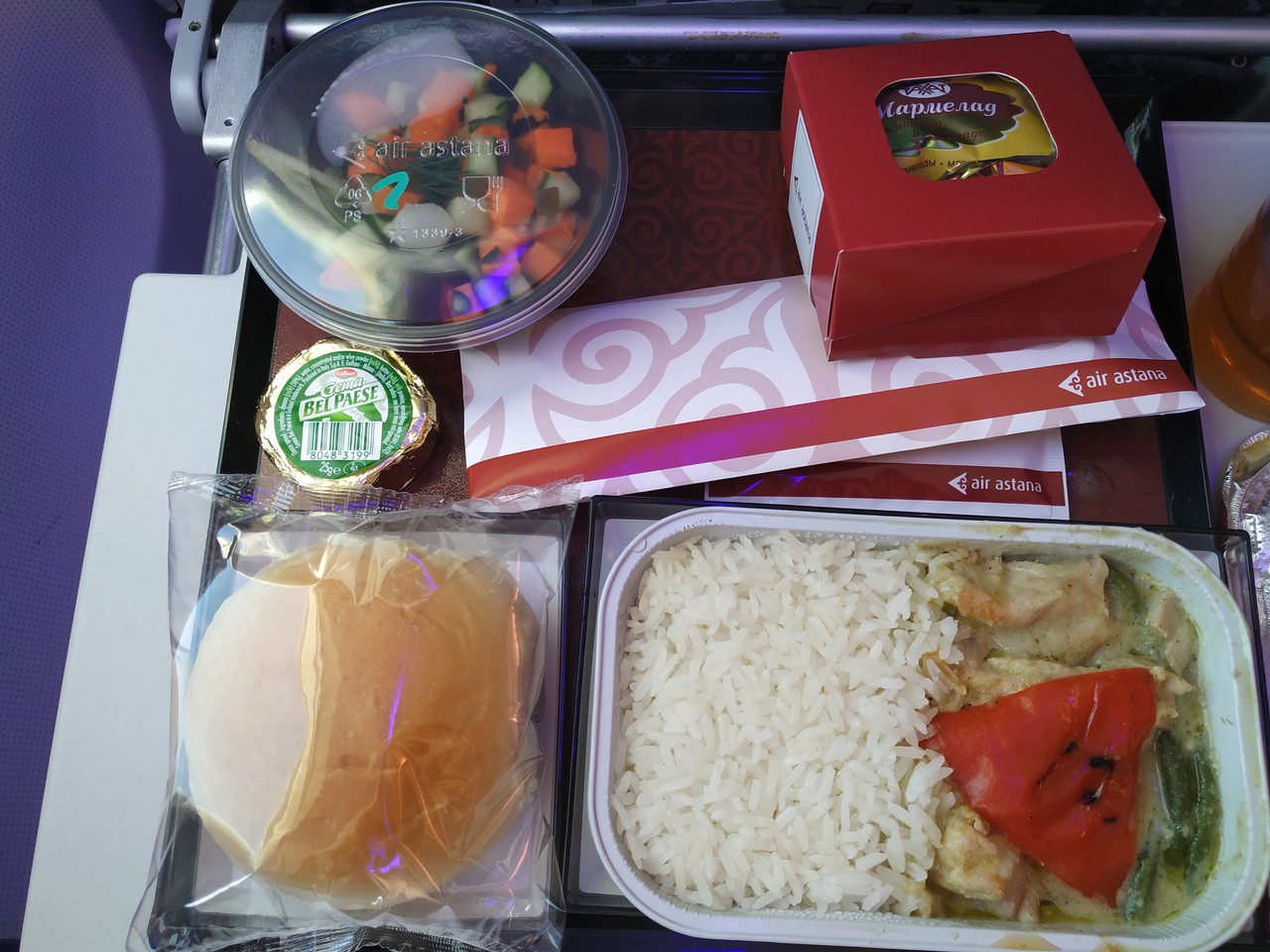 The lunch service, served with the main dish of chicken along with source in central Asia style, I couldn't figure out what it actually was, as there was no menu provided, but it tasted really good. The side dish was a salad, which tasted terribly. The dessert was a pack of chocolate and sweets, their taste were interesting, I never tried those before and I requested for an extra pack 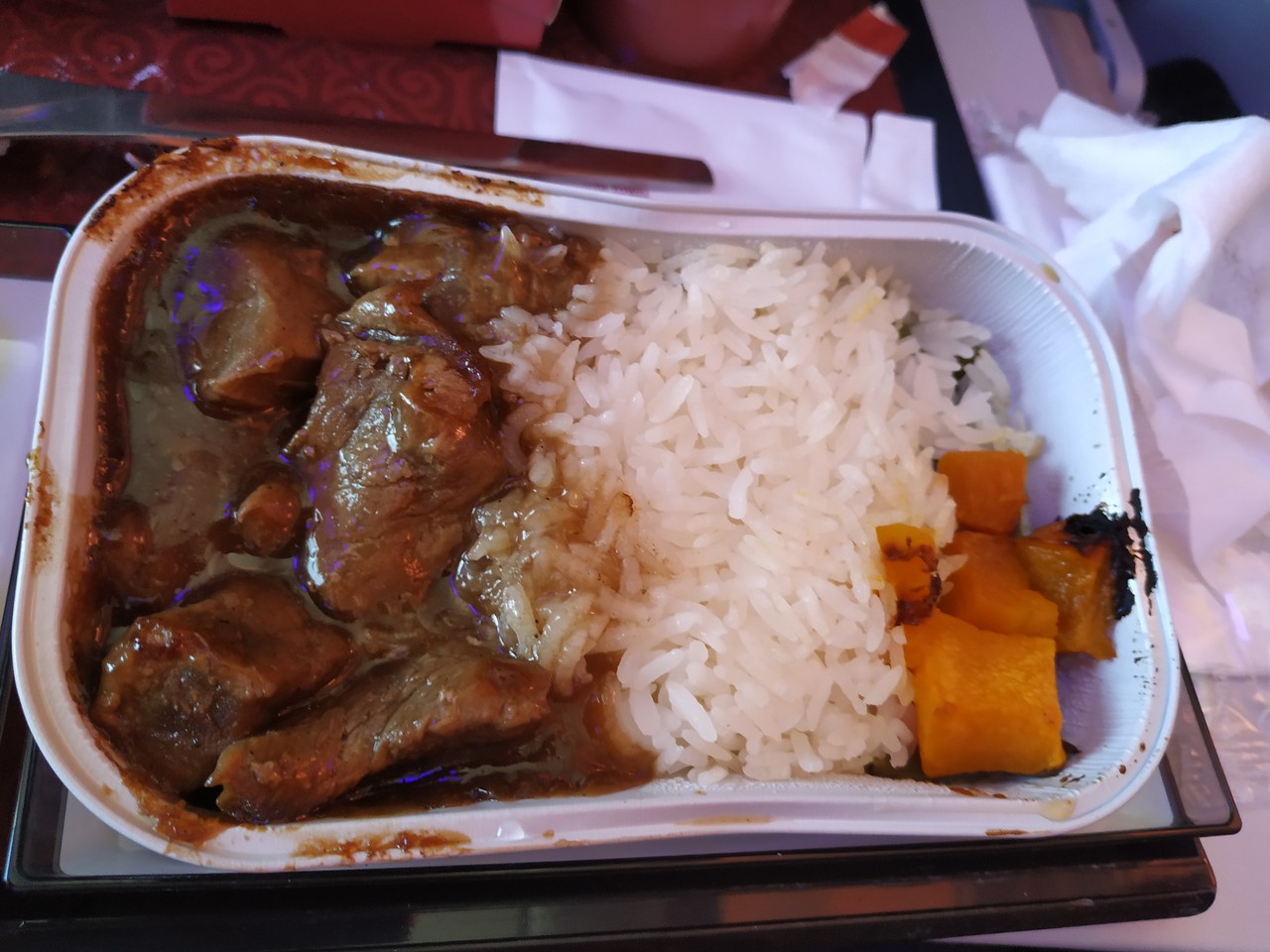 Another food selection from my neighbour, which was the beef with rice, I guess mine was tasting better (?) 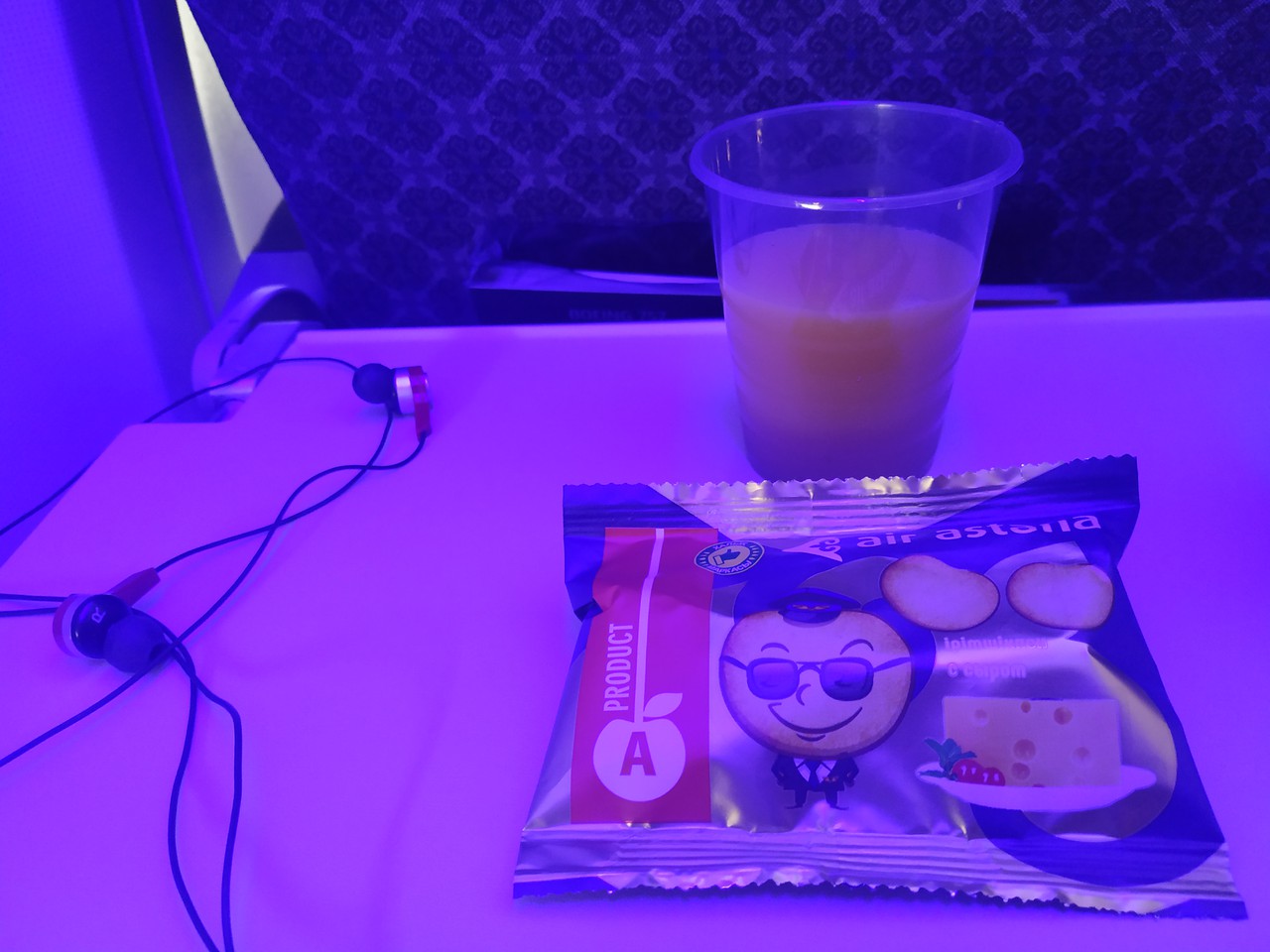 Some snakes distributed in the mid-flight. 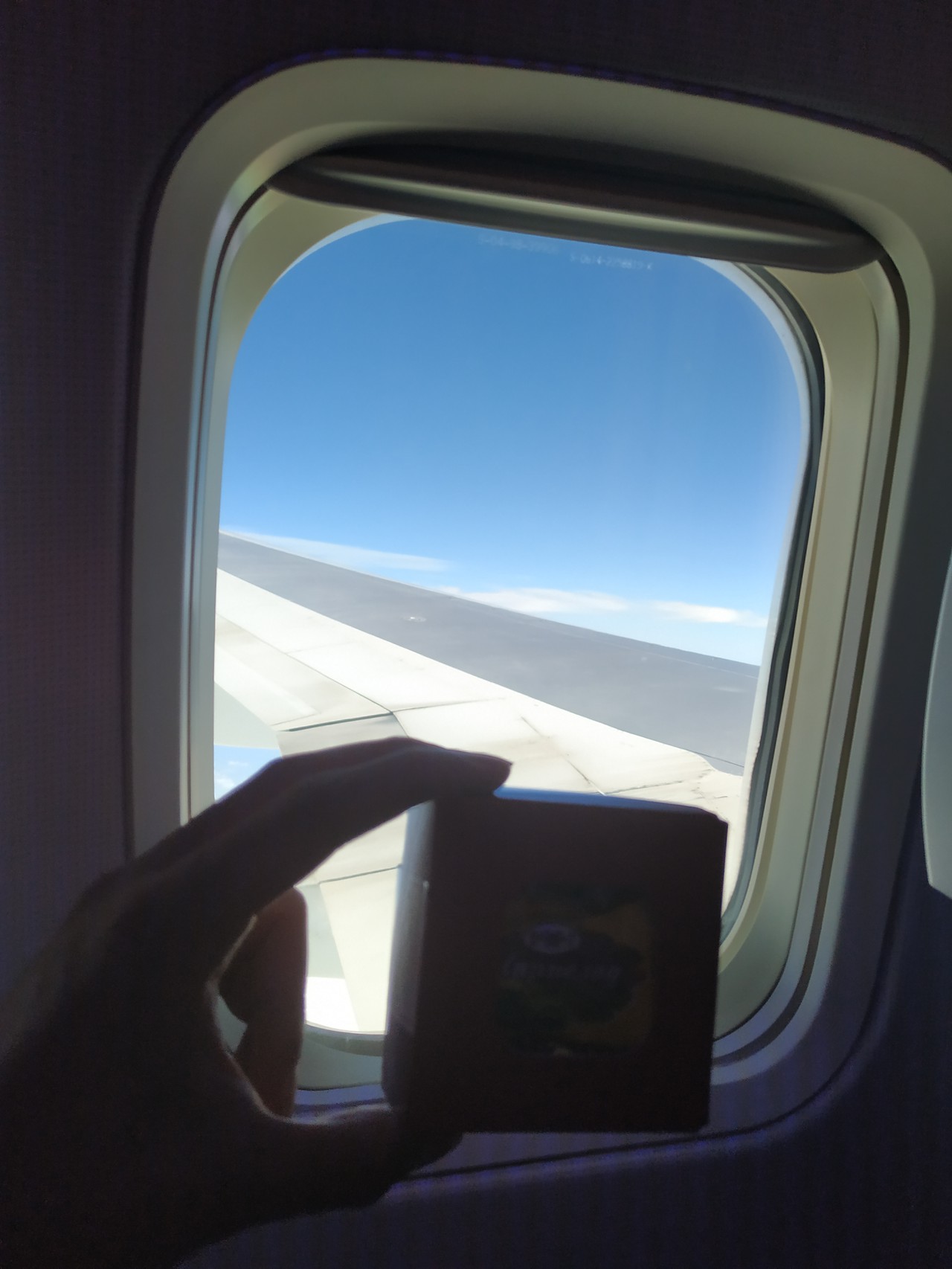 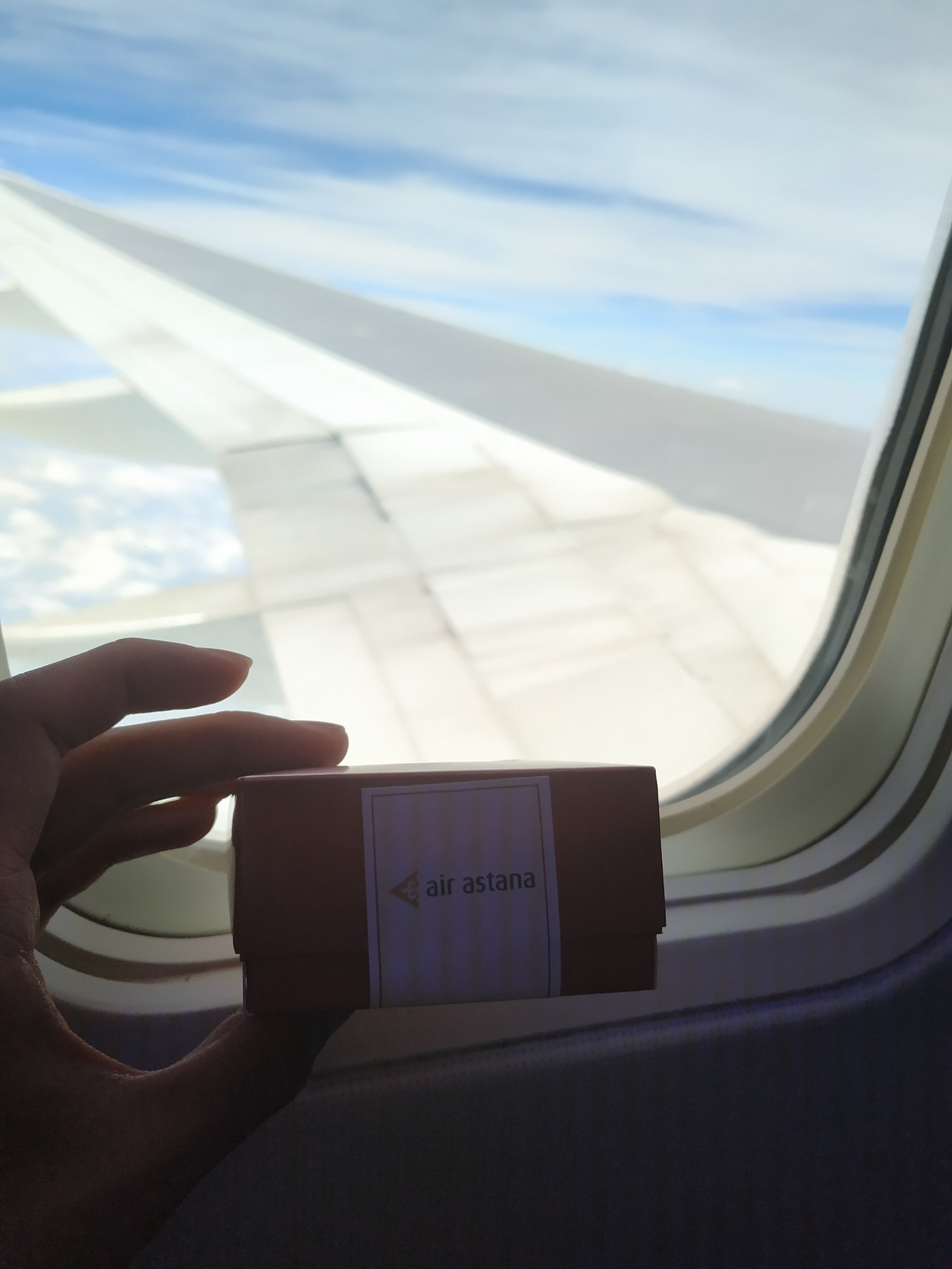 A chocolate bar was given right before descending.

IFE and other shots 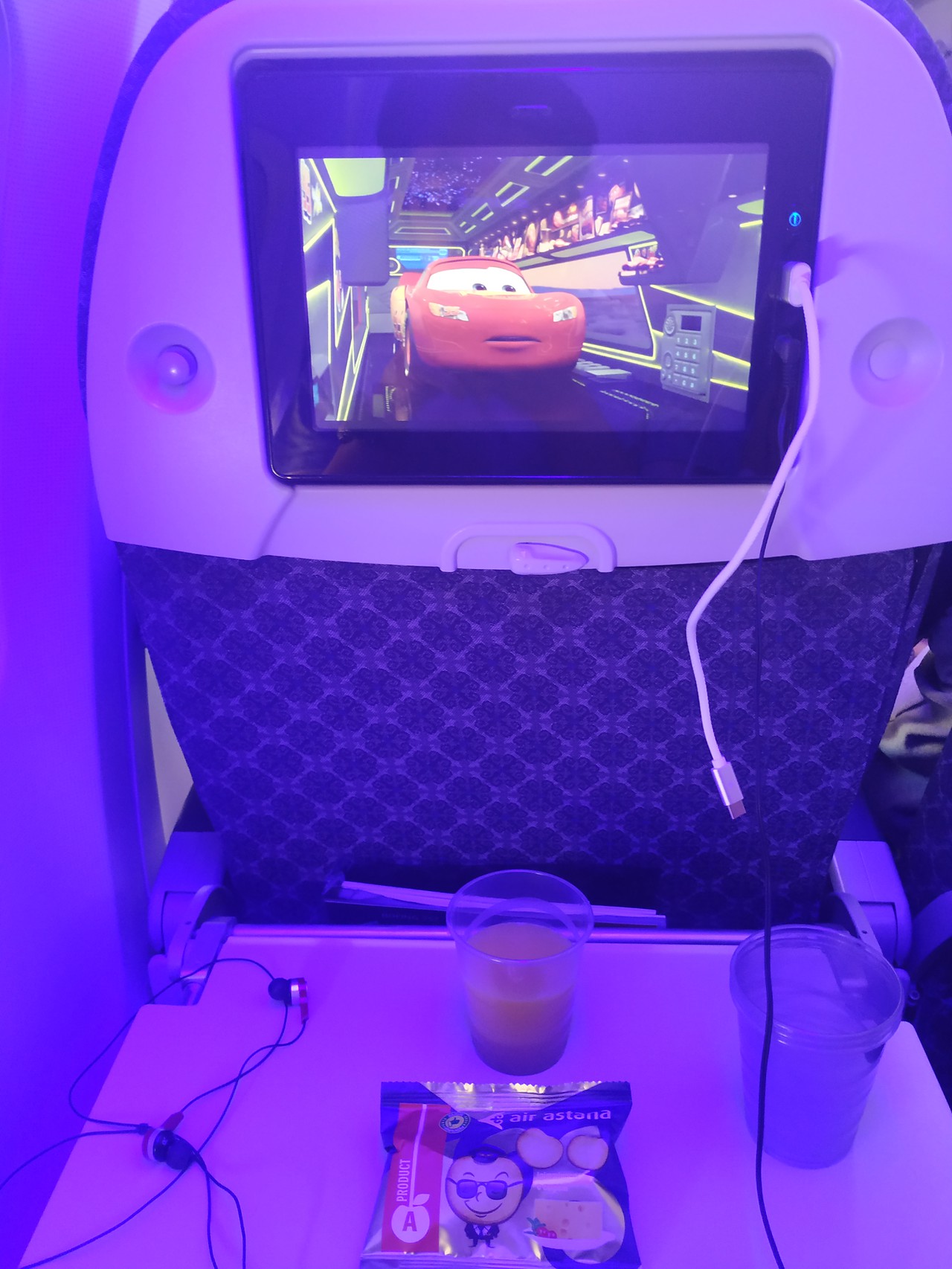 The movie selections was various, I could find lot's of interesting movies which suited my preference. 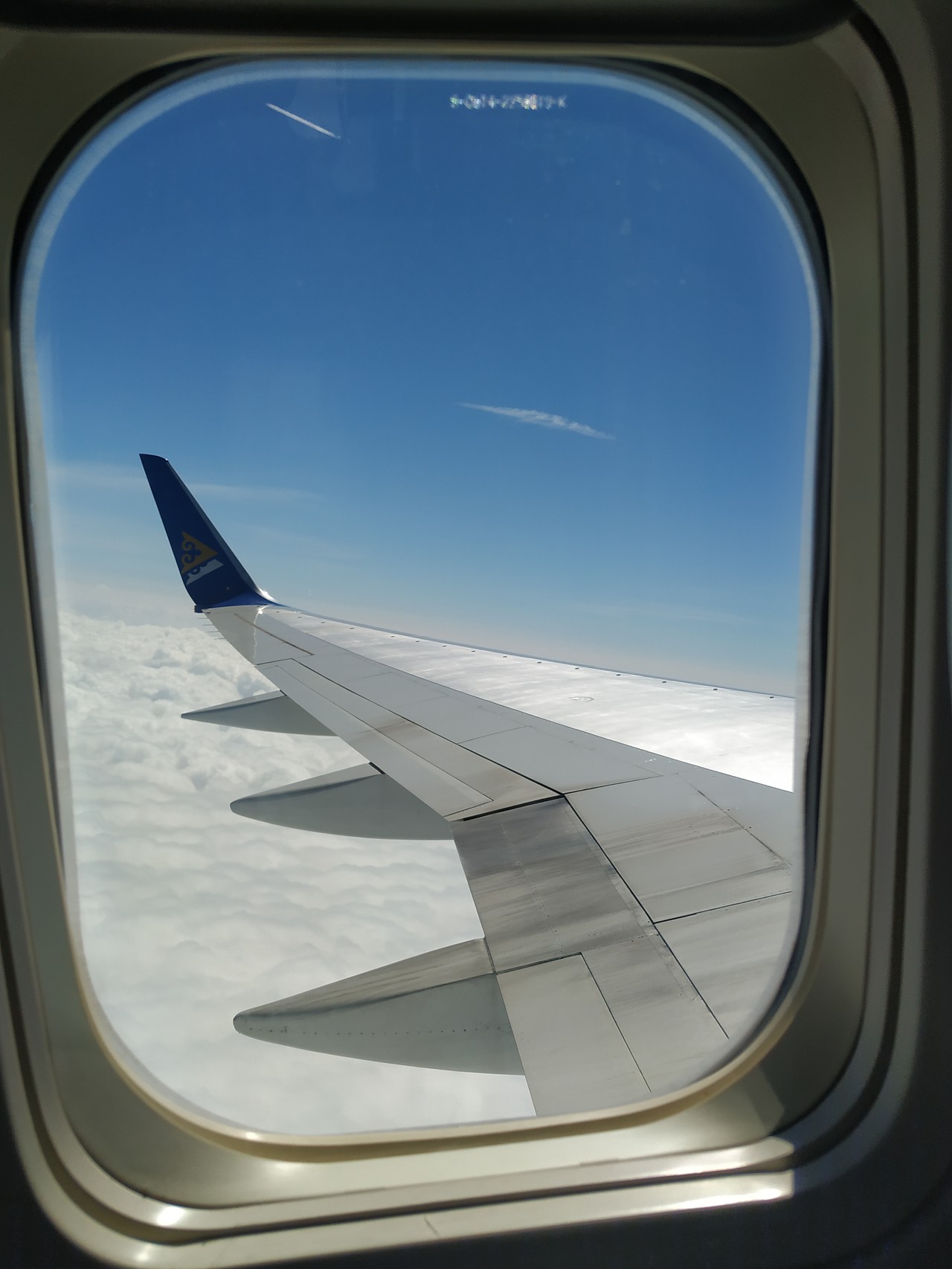 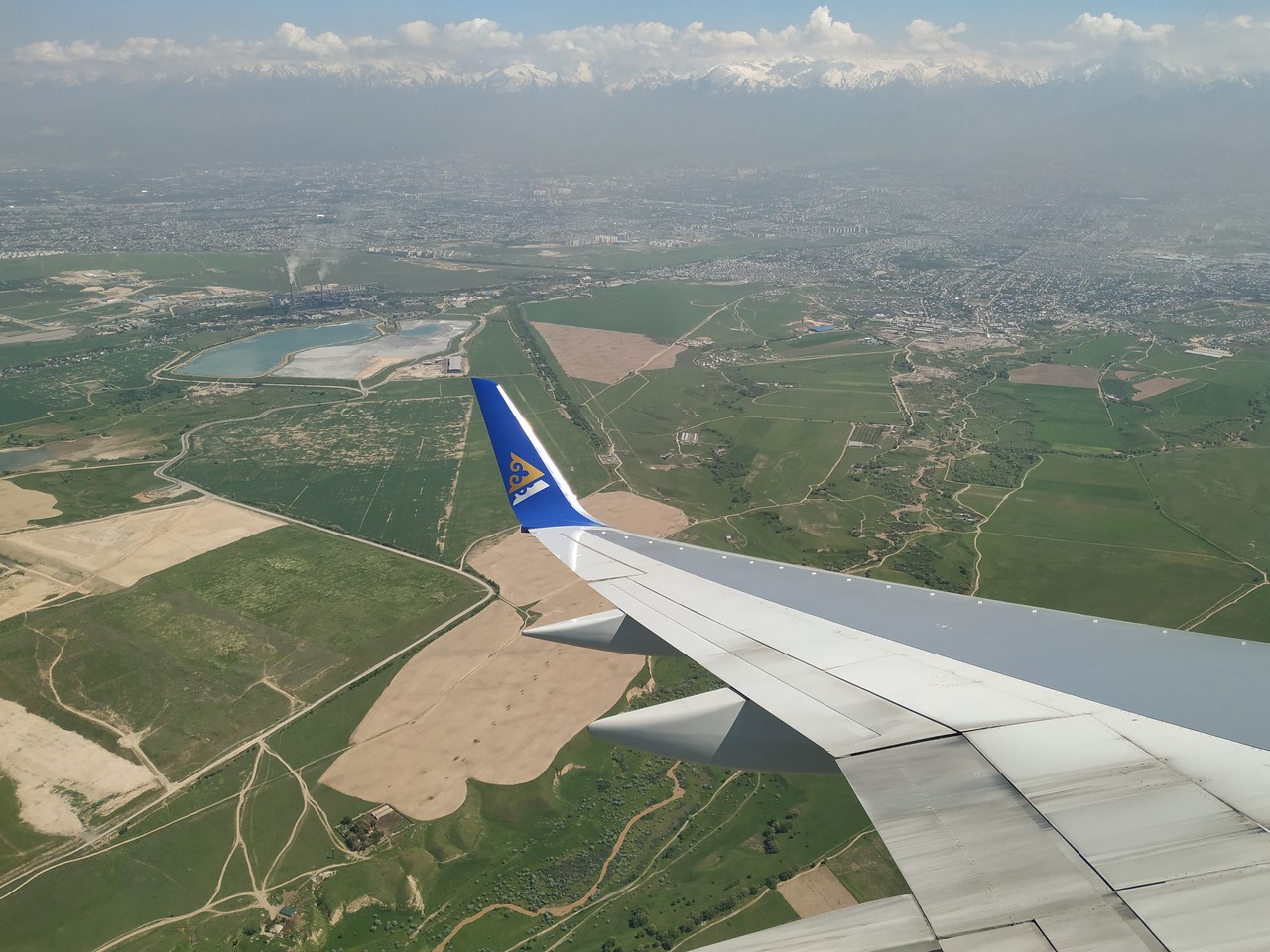 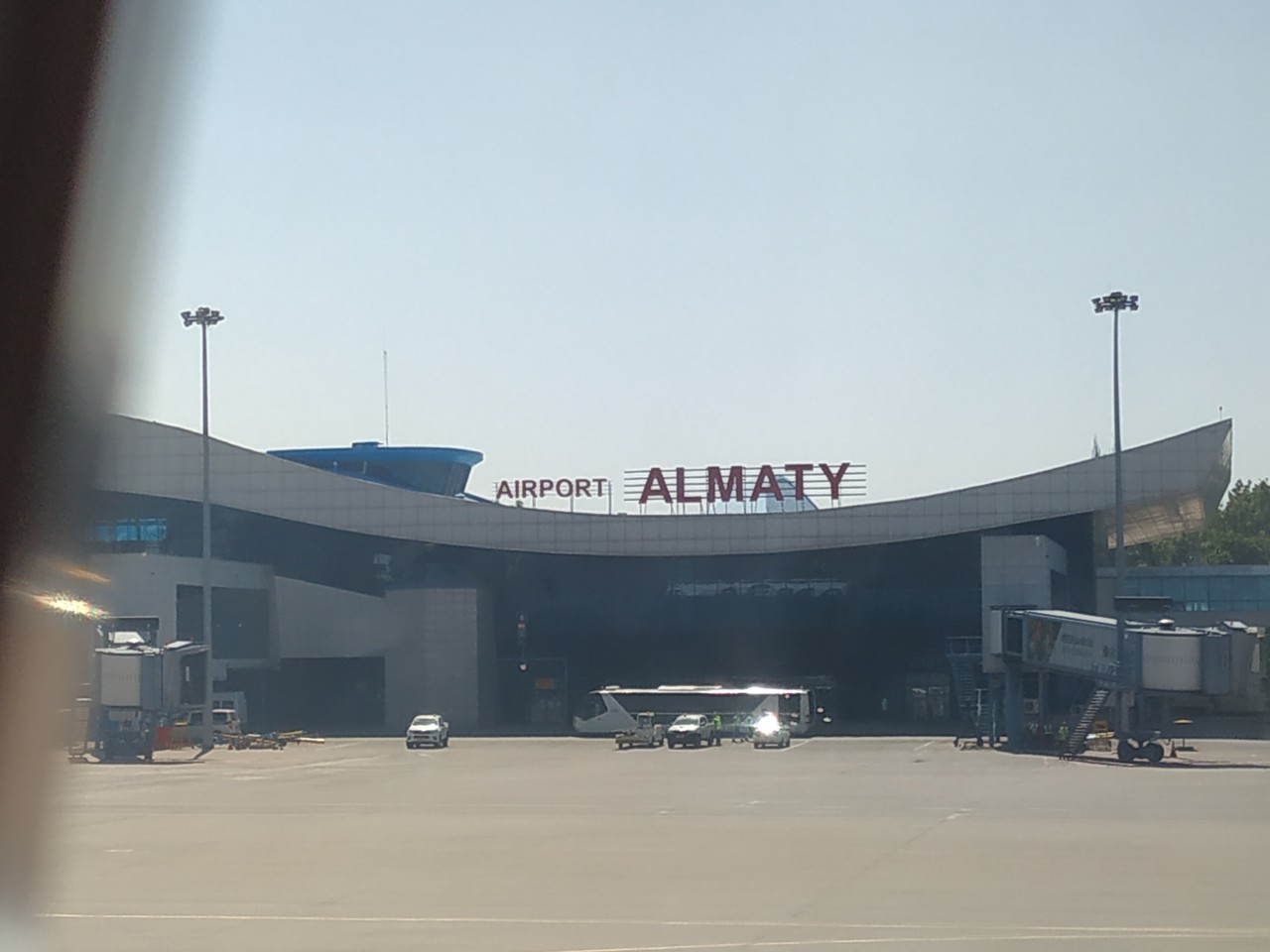 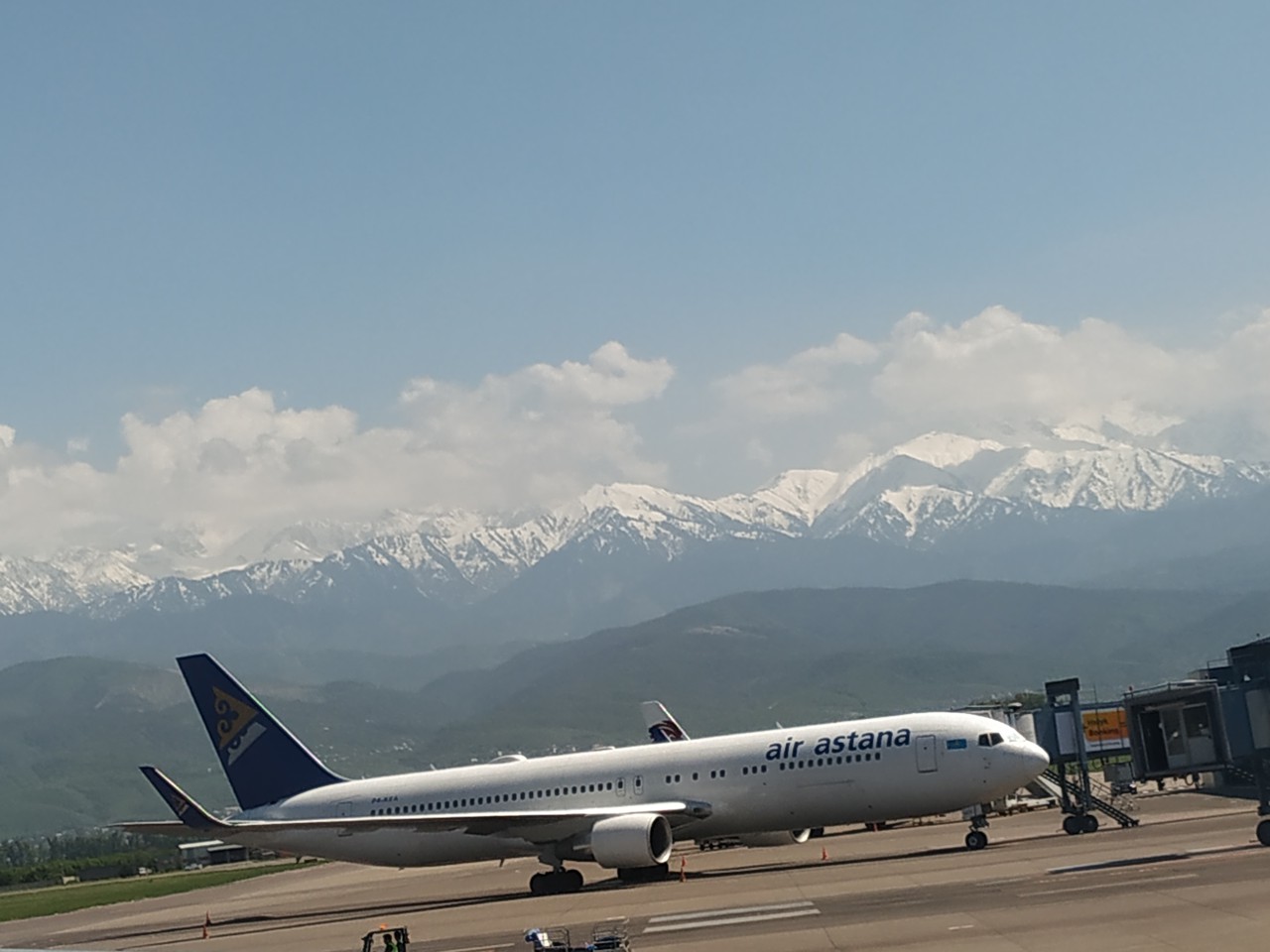 Parked next to an Air Astana Boeing 767-300ER, the background is the Caucasus Mountain (?)

I had heard some hidden rules that the ALA airport does not allow passengers to take any pictures inside the terminal, so I didn't take any pieces of it. The experience during my transit was not pretty good at all, the terminal is too small for an international airport, where the facilities are old and poorly organised, with limited shops and zero entertainment. Although there was a WiFi service, but it was ill-connected, it was a nightmare during my 3 hours transit.

It was a great try on an emerging airline company in the central Asia, though it was a bit lagging behind from the traditional careers, like CX and QR, though it's rather unfair in comparing KC with them, but something I couldn't deny with is that, Air Astana had surprised me in different aspects, from catering to the IFE systems. Though my experience on the transit in the ALA airport was rather disappointing, but I believe those hardwares can easily be modernised soon, still I am looking forward to see further expansion of this company and hopefully will it appears to be one of the best airlines in the world.