By TerryYong 3549
Published on 26th October 2013
After 2 days of snow, the weather was perfect on the 3rd and 4th day I was in New York! Cool temperature with sunny skies! Loved it! As this was not our first visit to NY and having been to the main tourist attractions, this trip was more of exploring the unexplored areas as well as shopping!

The ever famous Times Square!

Lunch and more of streets of New York.

Everyone's out at Central Park!

After New York, the next destination would be Las Vegas, mainly for another natural wonder, Grand Canyons! I had booked the flight, again on Jetblue for a rather low fare, to depart New York in the evening, reaching Las Vegas around midnight. Just in time for bed in Vegas.

Again, took the subway and AirTrain to JFK T5. Surprisingly, the terminal was very crowded! Totally different from 4 days ago when we were departing for Buffalo. Snaking queues were seen at the check-in desks as well as the bag-drop desks. This time round, I was able to obtain our boarding passes from the machines but the wait for bag-drop took another half hour! With Jetblue offering free baggage check-in, it is no wonder almost everyone wants to check in their bags. Also, there were lots of flights departing in the late evening as well!

Boarding pass on a paper printout. 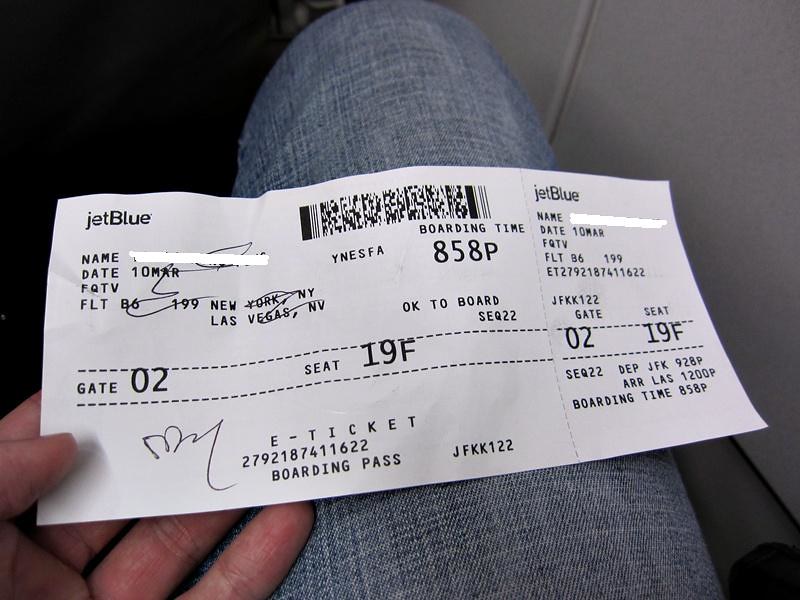 Security was fast and we proceeded to Gate 2 for our flight, just before boarding commenced. The flight would end up almost full tonight! This would be my 2nd long-haul flight on Jetblue, the first being JFK to San Jose a few years back. Guess not many people flew on an A320 for 5+ hours! 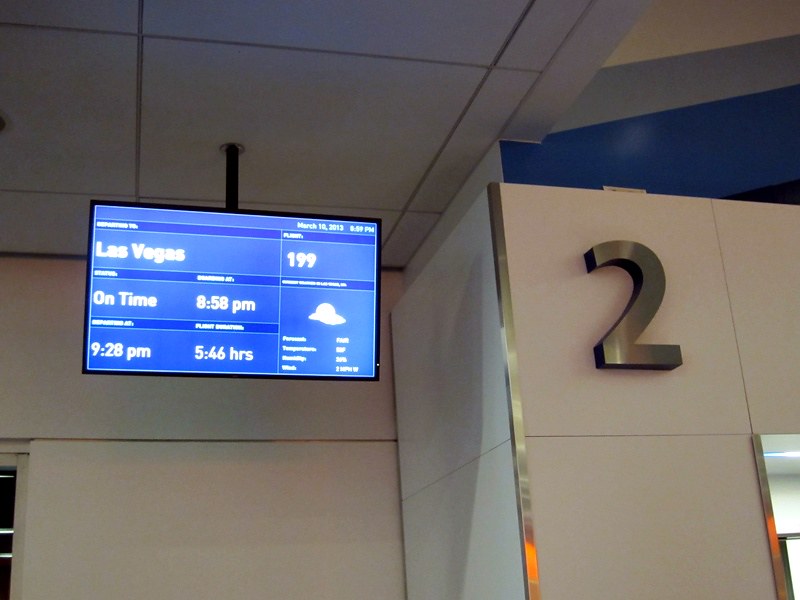 Blue Belle would be making the long-haul to Vegas tonight. 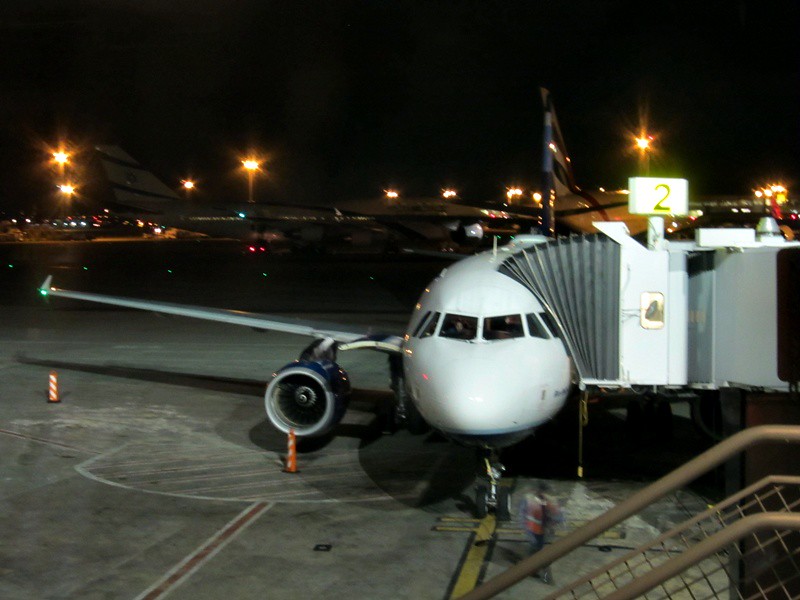 Boarding started by status, Even-more space seats, followed by row numbers. Again was welcomed aboard and proceeded to our seats. Not much description and pictures for this sector as the plane is of exact same configuration as the previous jetBlue A320 flight, and the flight was in total darkness for almost the entire journey. 3 cabin crew again on this A320, and flight time was a quick 4h50m, compared to the scheduled 5h48m. Captain was a jovial guy who welcomed us onboard through the intercom while standing on the aisle.

Pushed back on time and taxied to Rwy22R for takeoff. Not too long a queue for takeoff tonight. 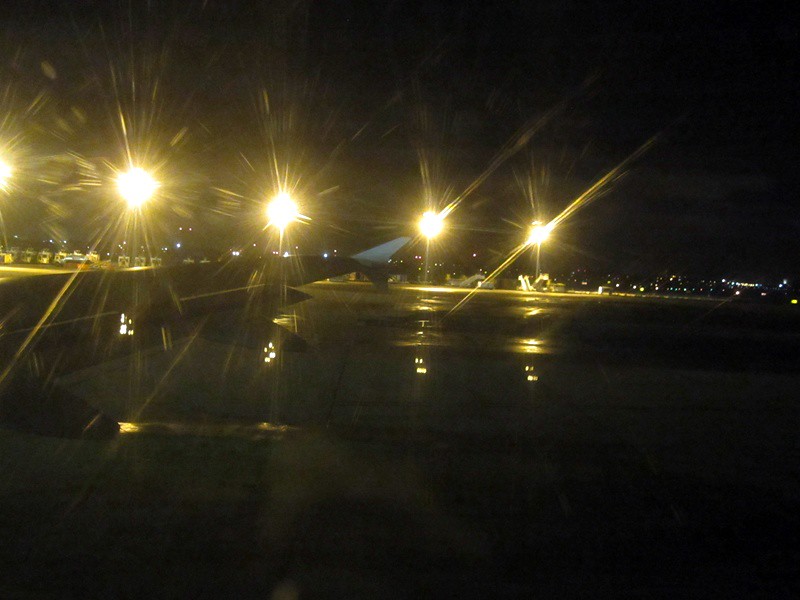 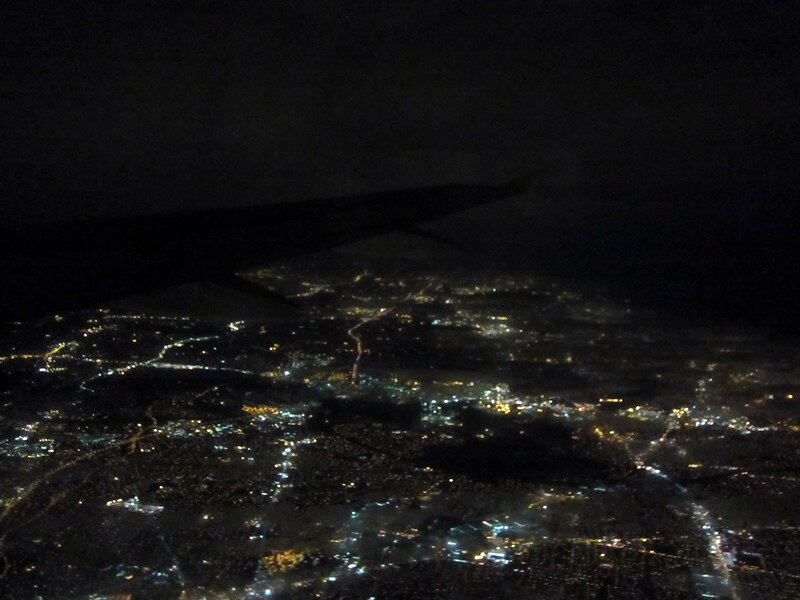 Again, we started on our DirectTV entertainment. Cabin lights were again, dimmed for the entire flight till landing preparations. 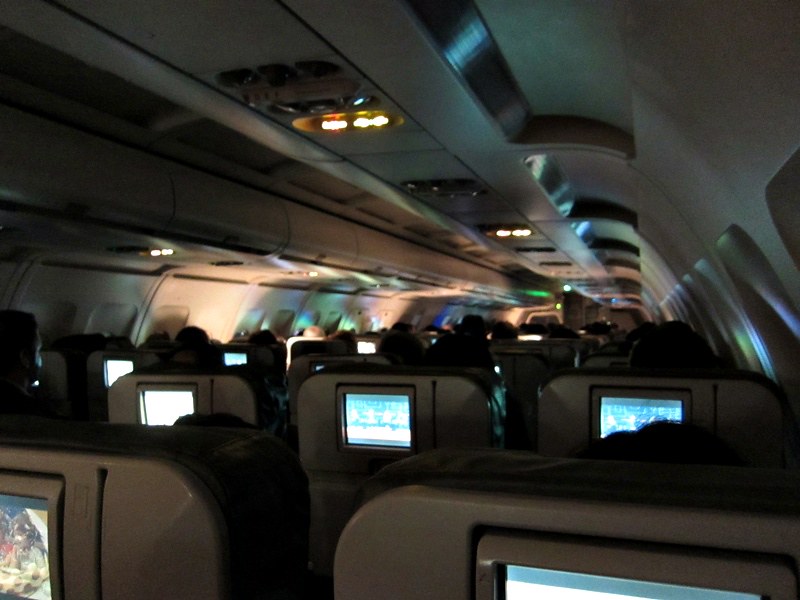 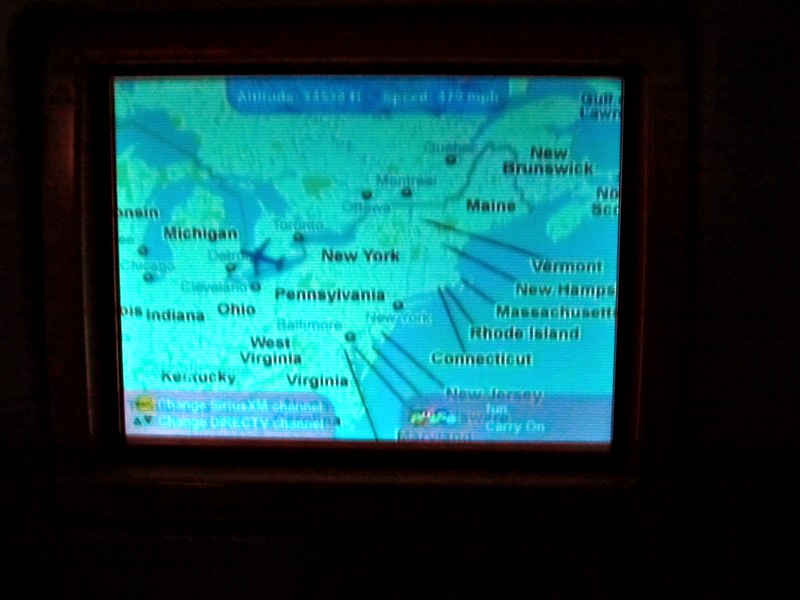 Cabin service started, first with the offering of buy-on-board items of pillows, blankets and meal boxes, with apparently no takers, followed by drinks. Again, no carts were used and the crew took orders from a couple of rows at a time and serve them direct from the galley. That meant for a lot of walking for the crew! On offer were all the beverage selection from the inflight guide card (refer to my previous post on the JFK-BUF sector). We had cranberry juice, Arizona iced tea and bottles of water, served in whole cans with cups of ice. I was still very impressed with the quantity of beverages jetBlue have onboard! 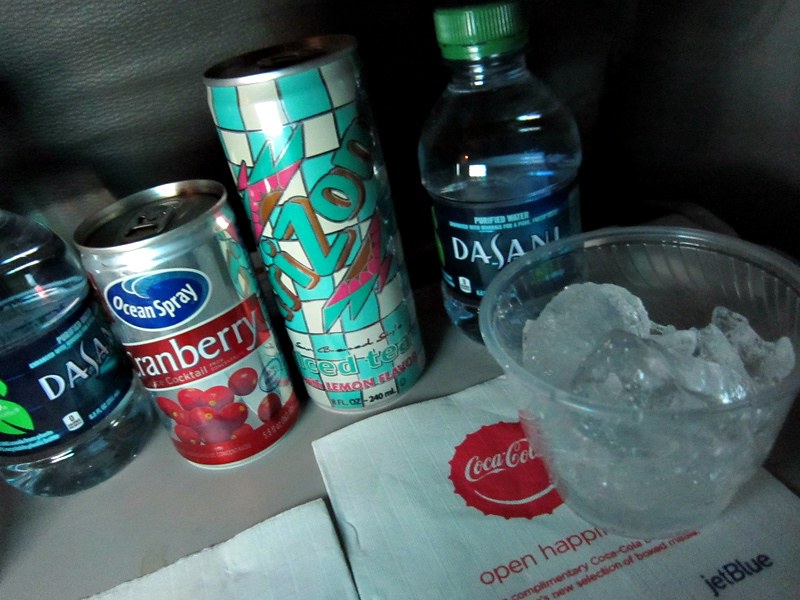 After drinks were distributed, crew came down the aisle with snack baskets, again offering everything that was on the menu. We were free to grab as many as we wanted! We had the blue chips, corn chips, popcorn chips and the so delicious mixed nuts! That was a lot of snacking! 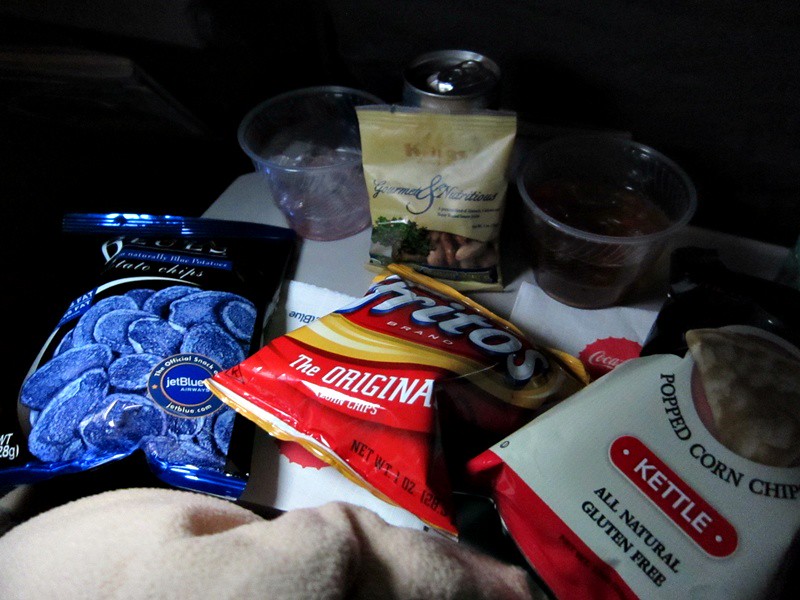 Then it was back for more channel-surfing followed by a nap. Passengers were free to go to the galley to grab additional snacks or drinks though. 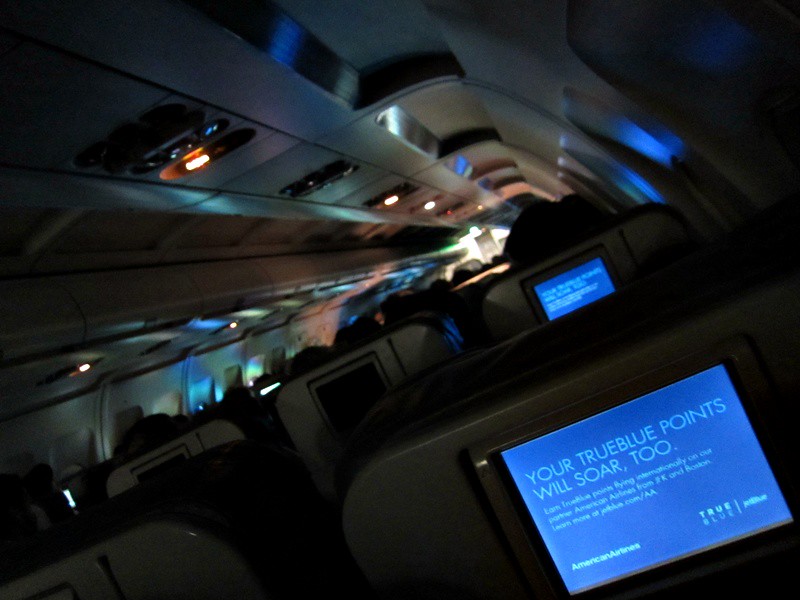 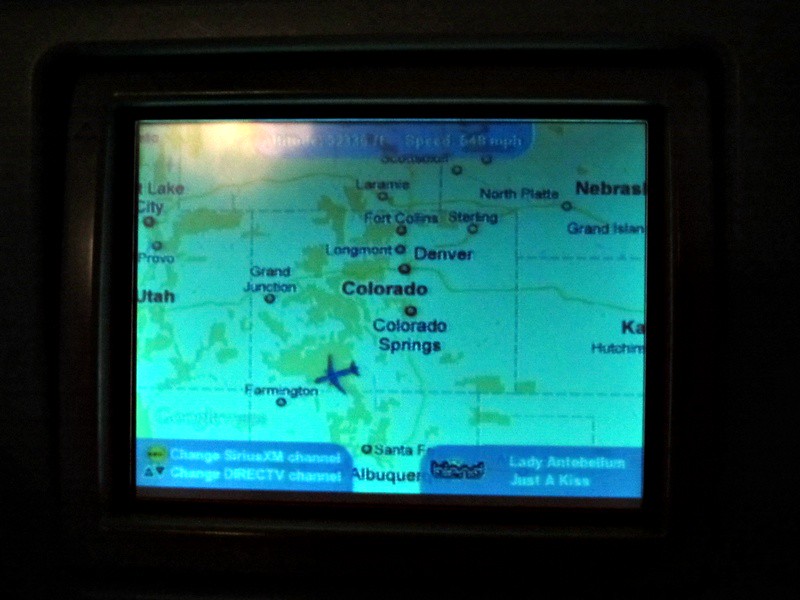 From East to the West. 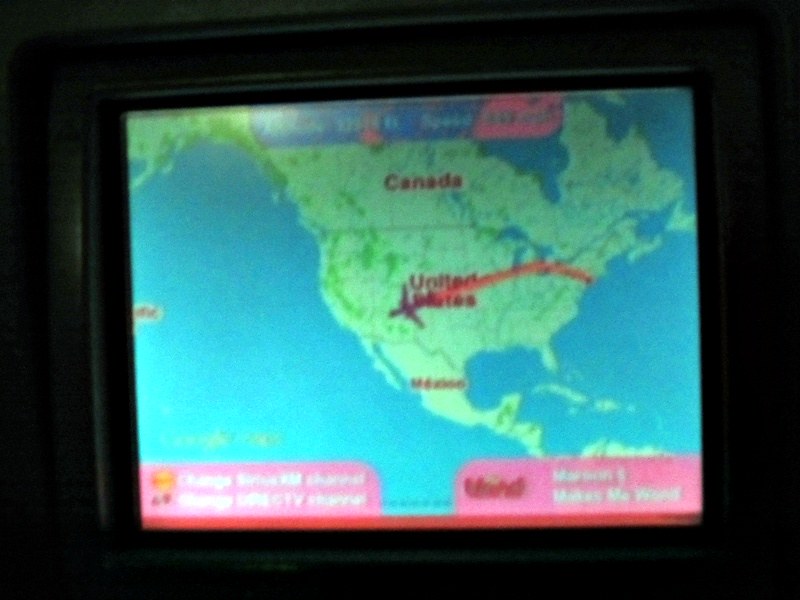 Then the most unexpected thing happened! While we were nearing Las Vegas, a crew member came down the aisle distributing something, which turned out to be hot towels!! True, they were not the SQ cloth type but were still much appreciated! Apparently this is part of jetBlue's overnight service, which I did not expect to receive on this flight as it was not really a red-eye flight. 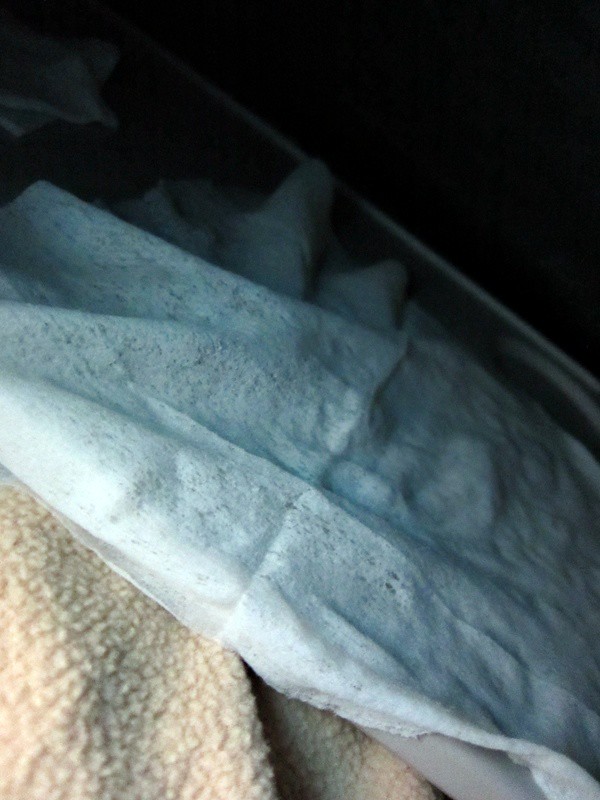 We soon made our descend into Las Vegas, with the crew switching on the cabin lights and preparing the cabin for arrival just less than 10min prior to touchdown! 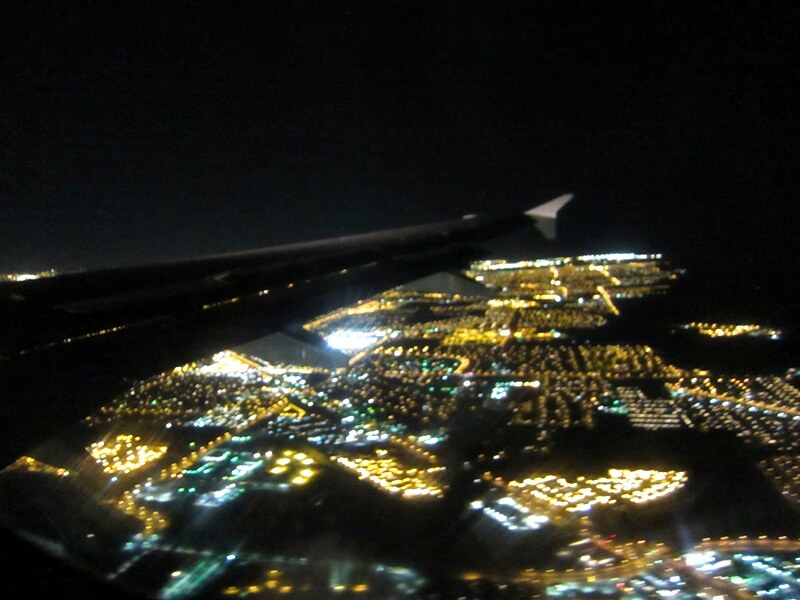 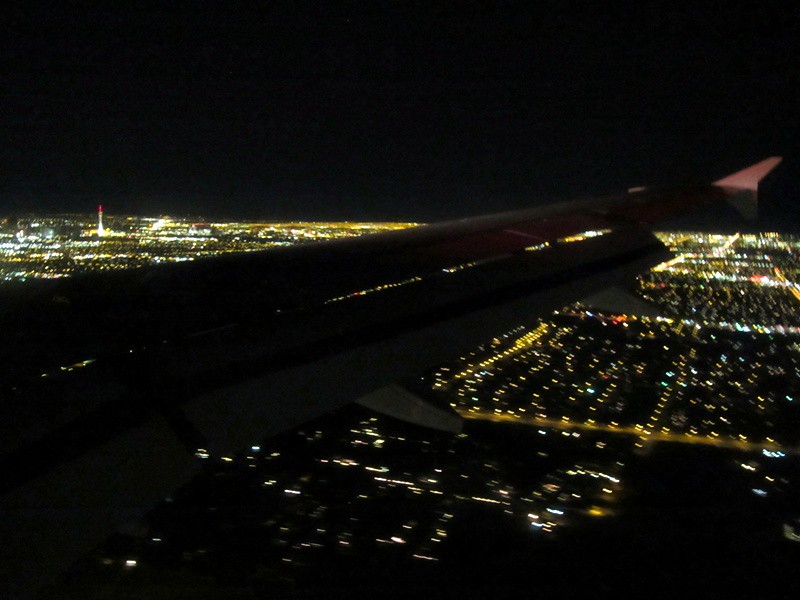 
Well, our early arrival was of no use as the gate was still occupied by another jetBlue aircraft awaiting pushback. So we had to wait on the taxiway for almost 20mins! 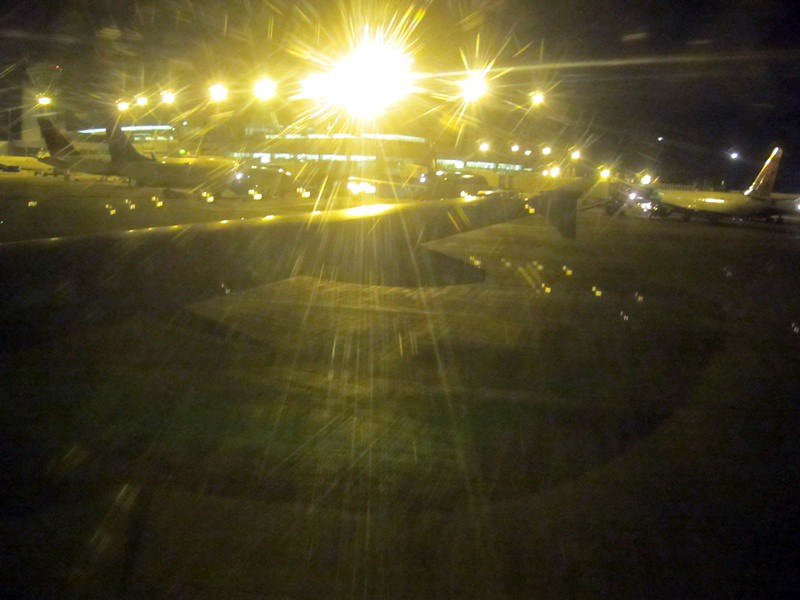 It was till the other aircraft was pushed back that we got to dock at the gate at the new Terminal 3. 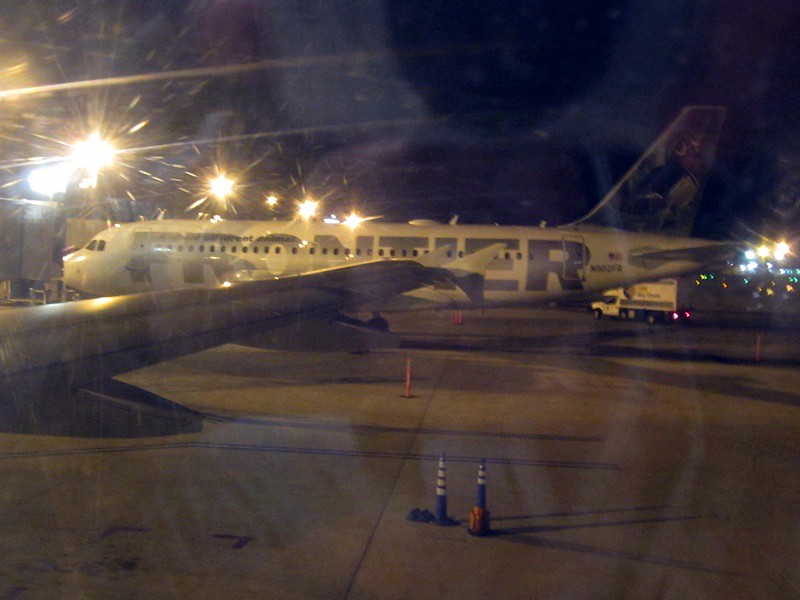 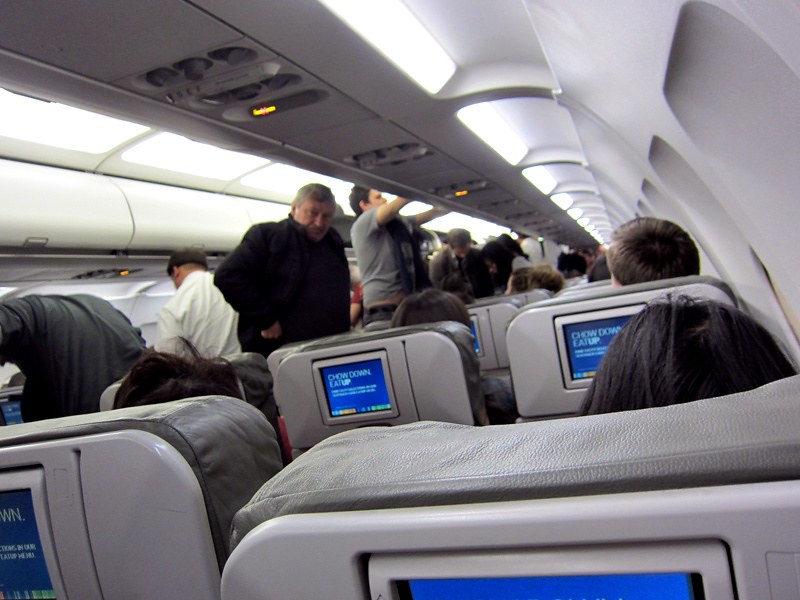 Seat for the last 5hrs. 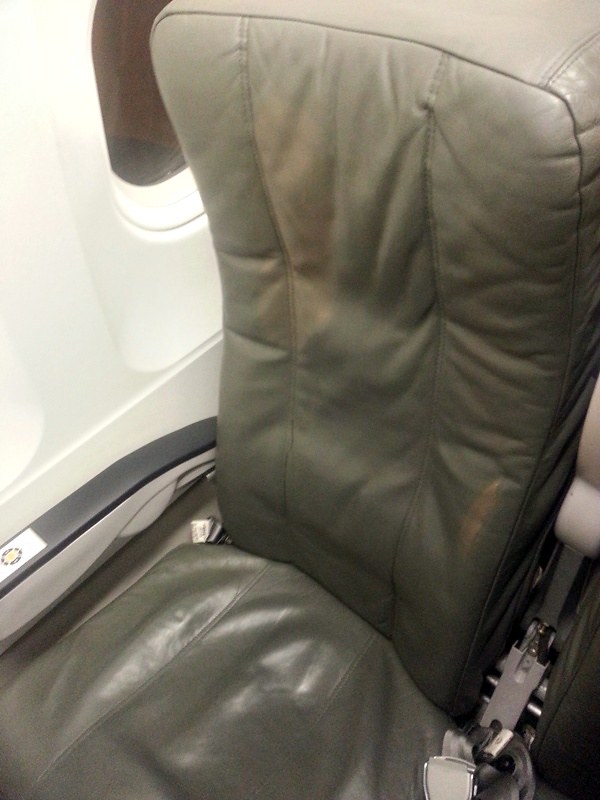 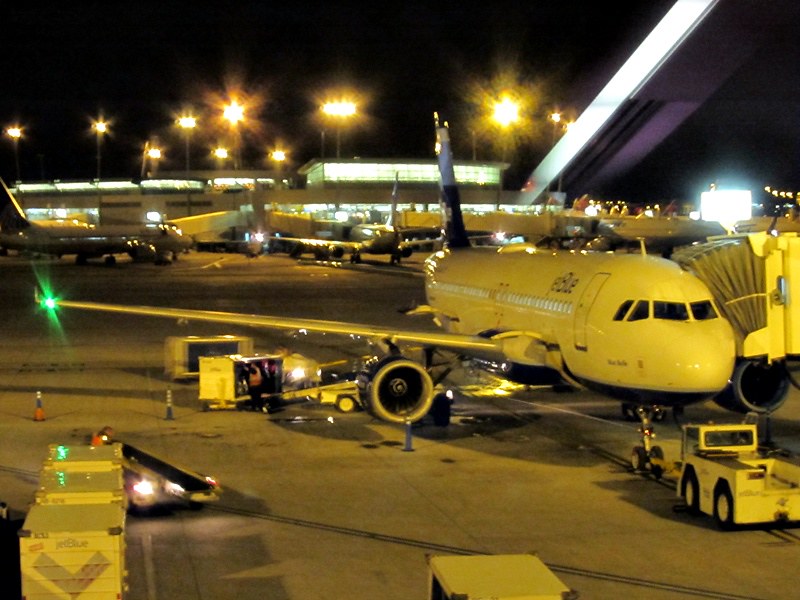 You know you are in Vegas when the first thing you see as you disembarked into the terminal are jackpot machines! 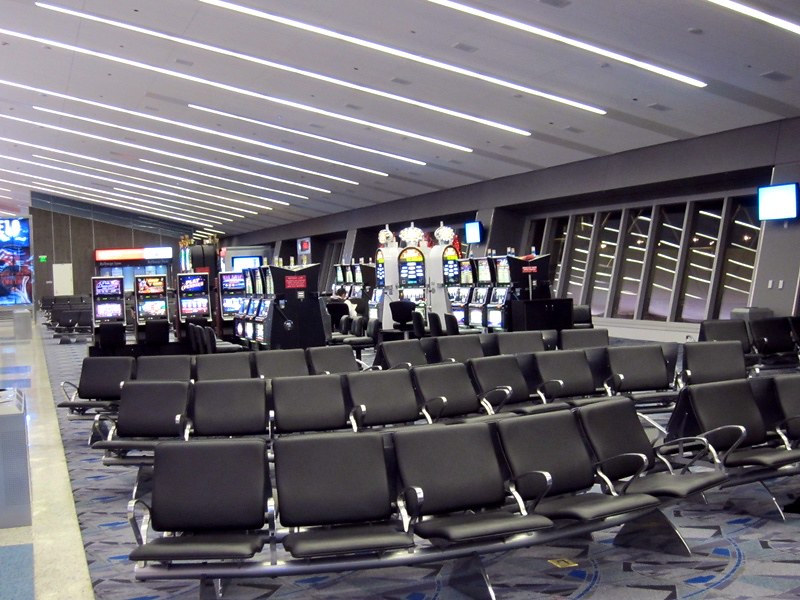 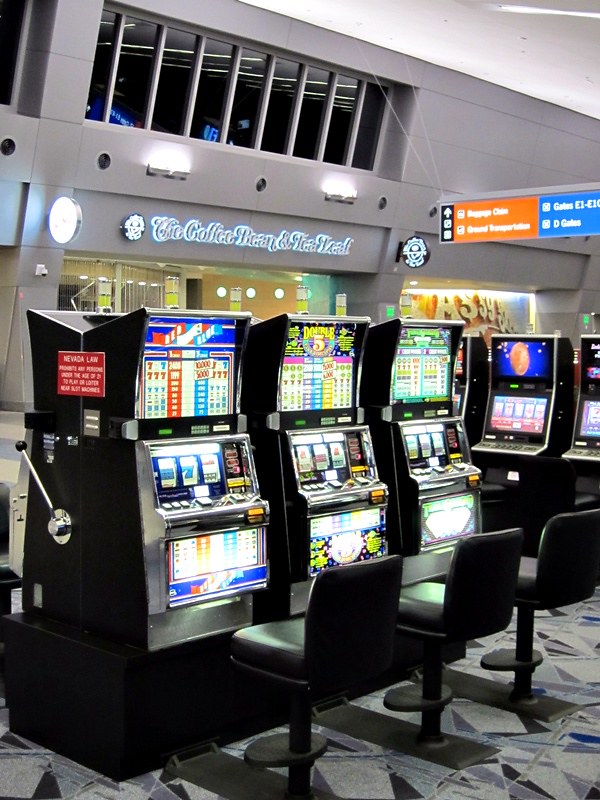 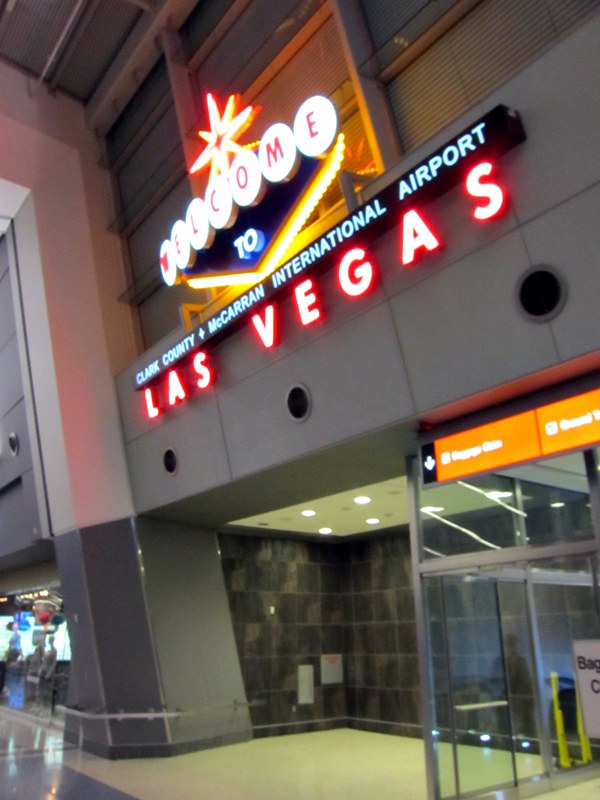 Even slot machines at the baggage claim area! 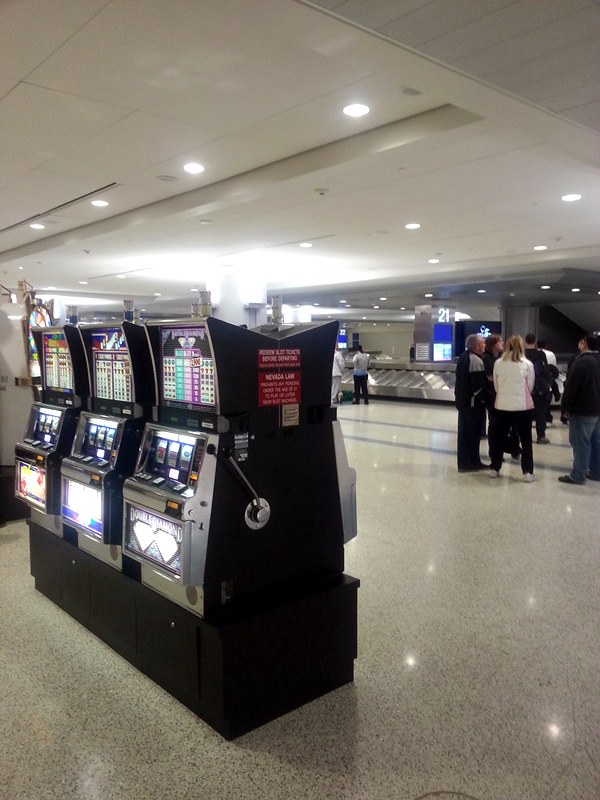 After getting our bags, it was off for the pre-paid shuttle for the short ride to our all-suites hotel, Platinum Hotel, for the night.


It was bright and sunny as usual during the day in the middle of the desert.

Walking down the Strip!

More of the Strip

The Mirage by day.

It was another comfortable flight on jetBlue!

The airline with the best average rating is Virgin America with 8.0/10.

The average flight time is 5 hours and 42 minutes.