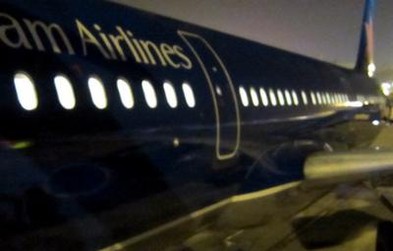 By TerryYong 4793
Published on 9th May 2014
For the next sector to Danang, we had to re-check in our bags and obtain boarding passes. A new section of the Hanoi airport terminal has just been opened and offers brand new check-in counters for some of the domestic flights. The new area is so much brighter than the rest of the 80s looking terminal. However, our gate would still be at the old section of the terminal as the new gates are currently still under construction, even though a new international terminal is also being built beside the current terminal. 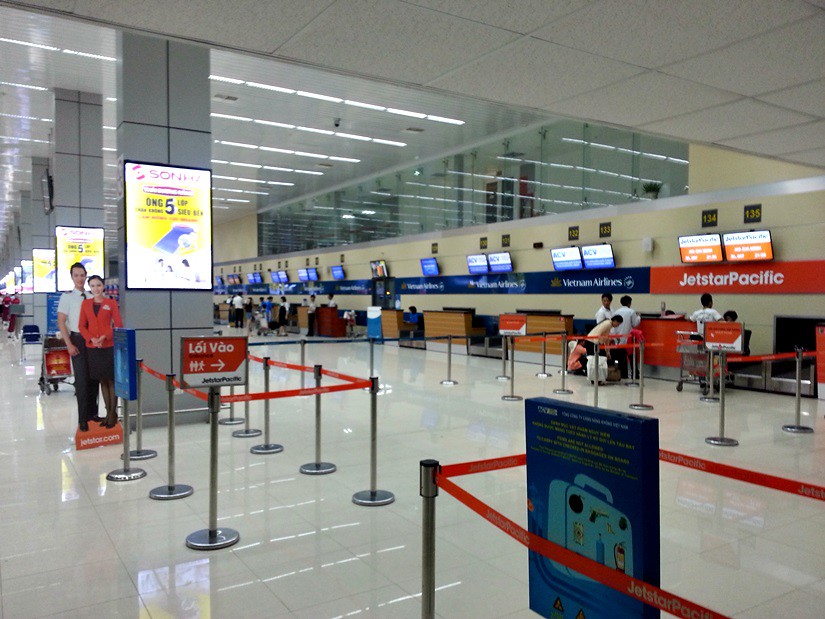 Through Optiontown, we were again upgraded for this sector. In fact, we were the only 2 revenue passengers in Business Class, but there were also 3 other paxing pilots seated in Business tonight as well. Shucks, missed out on a private J cabin. 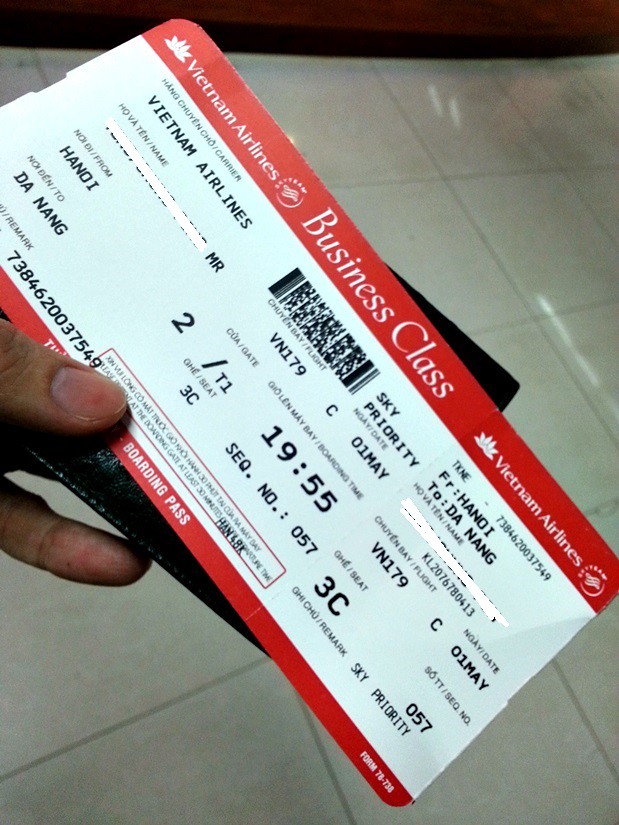 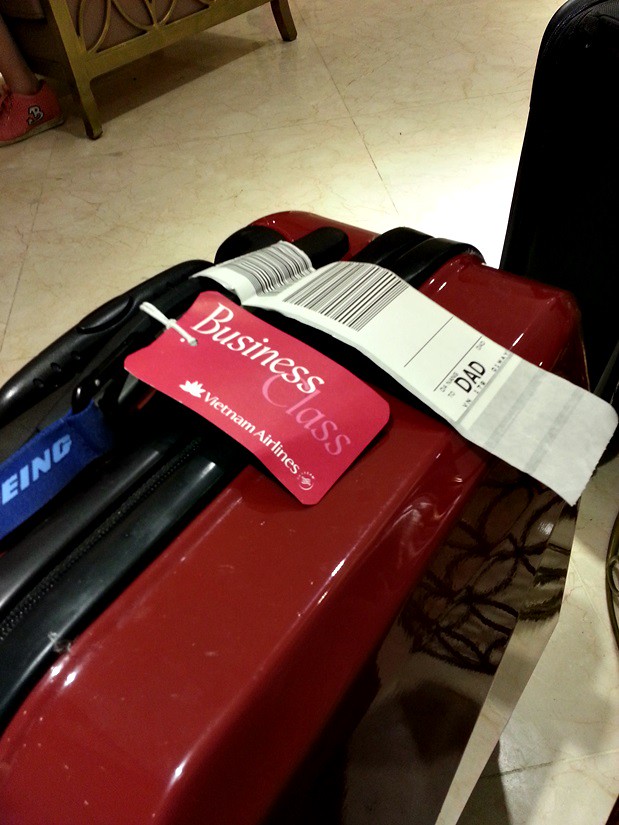 Through security with no hassles and into the domestic departure waiting lounge. The waiting lounge is the same with minimal shops and eateries as when I visited almost 5 years ago and is definitely overdued for an upgrade. 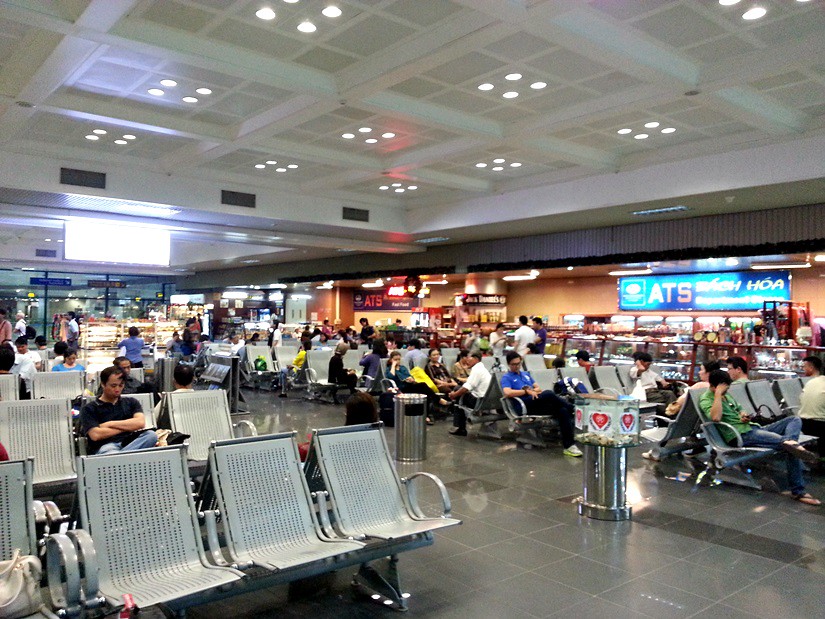 Our boarding gate, with no aircraft at the airbridge. It turned out that we would have to board via buses as the plane was parked at the remote stand. 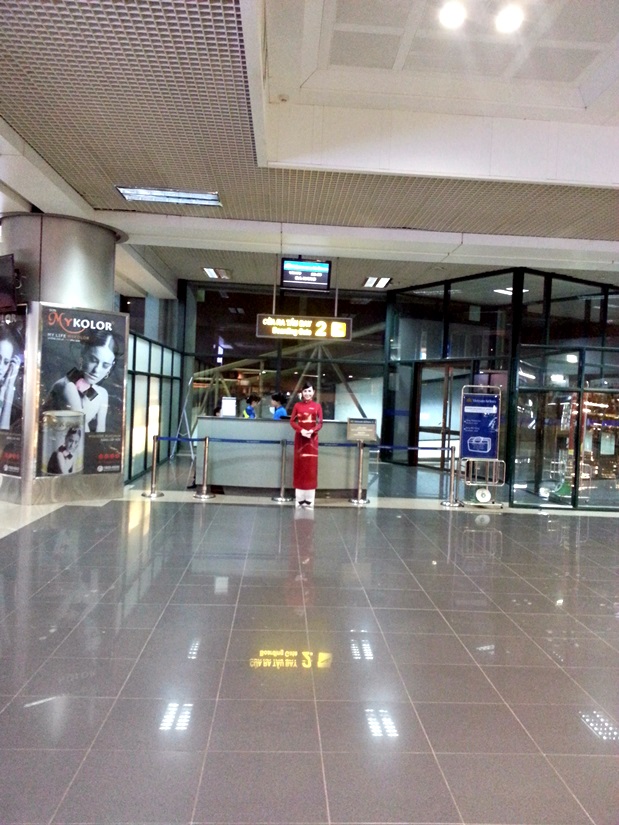 Soon boarding started and Business Class / elite pax had our own minivans to ferry us to the plane. As luck would have it, our flight turned out to be operated by the exact same plane that flew us to Hanoi just a couple of hours ago! 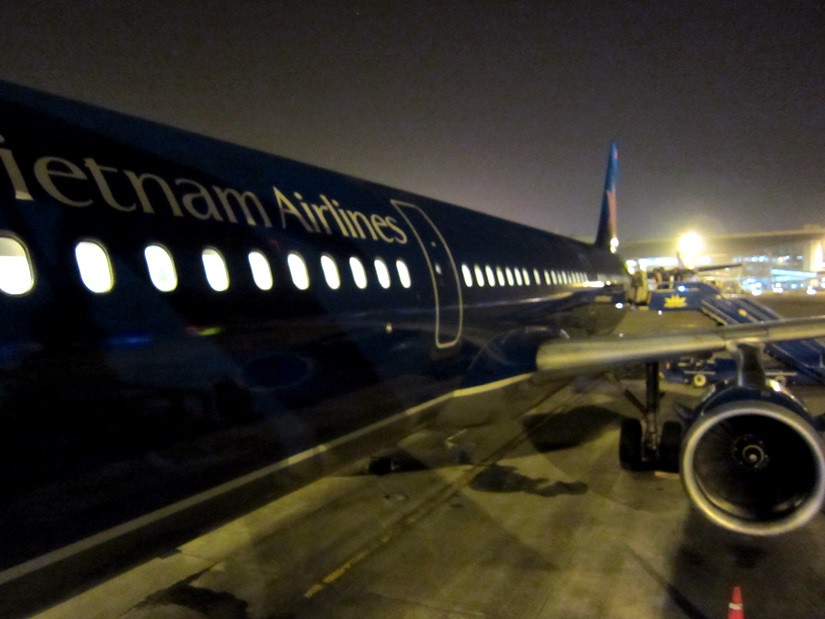 Up the stairs and to our seats at 3A/C. Business Class was staffed with a surly looking with no smiles female purser and a very pleasant and friendly younger stewardess. Luckily the purser stayed in the galley for most of the flight, leaving the young stewardess to serve us. After we were seated, the stewardess offered us cold towels followed by a choice of drinks (no champagnes offered on domestic sectors). We both opted for orange juice. A selection of newspapers were also offered which we declined. 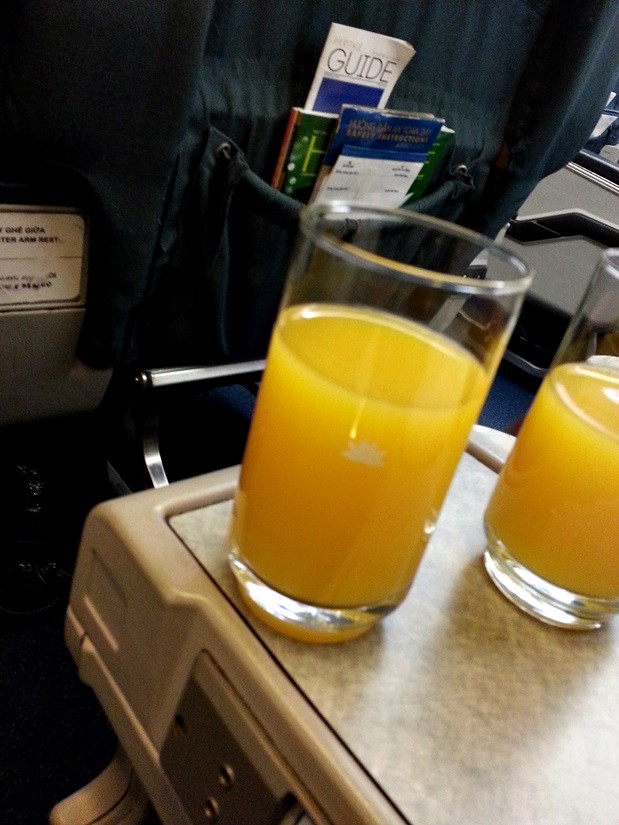 As the load on this flight was rather light, doors were closed early and safety video was played. Flying time would only be a short 1hr. 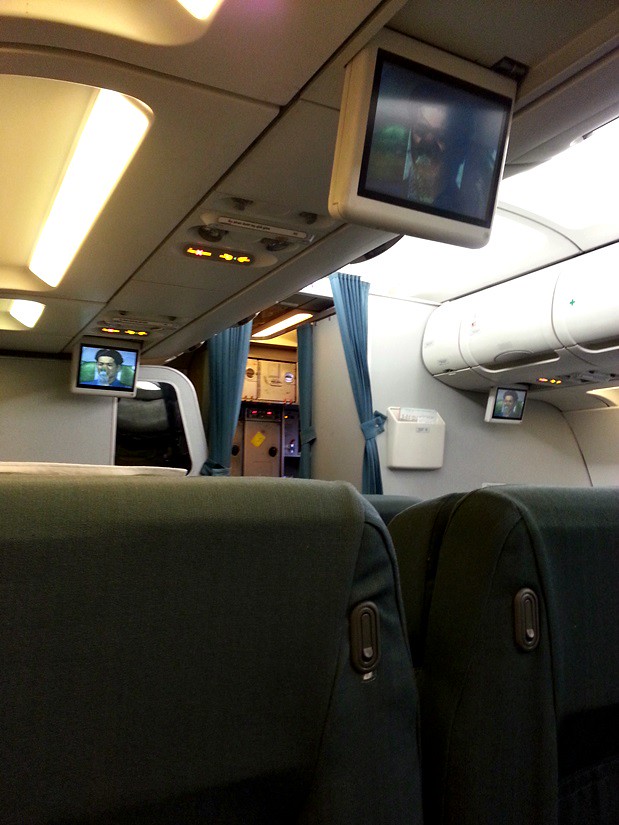 Soon we taxied to the runway and made a very powerful takeoff to Danang.


Shortly after seatbelt signs were switched off, the stewardess approached us and asked if we would like to join in the hot refreshment as well as our drinks choices. For this short flight, VN offers a rather filling chicken and mushroom pie and a dessert. The pie was served piping hot and was tasty! Dessert of a custard pastry was okay. We also had Pepsis to go along with the meal. It was a rather substantial snack for the short flight. 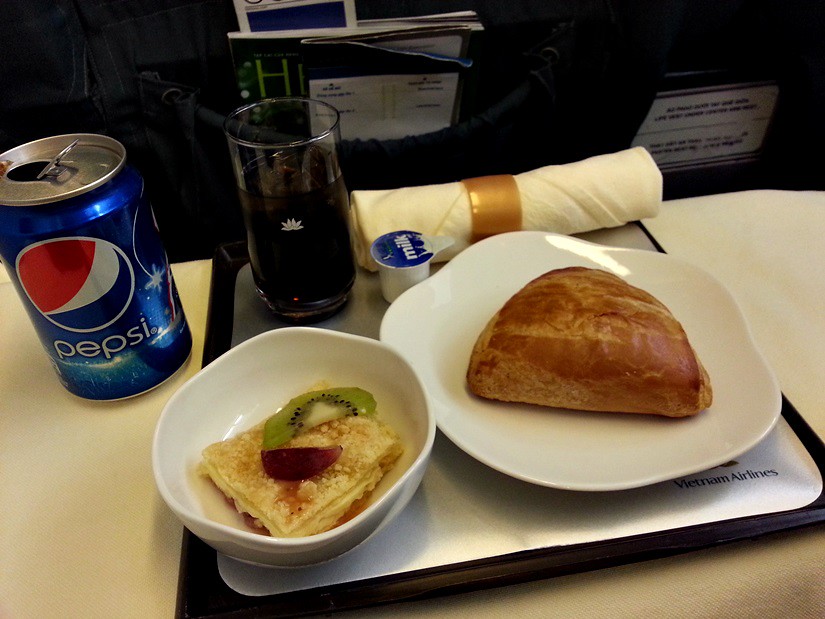 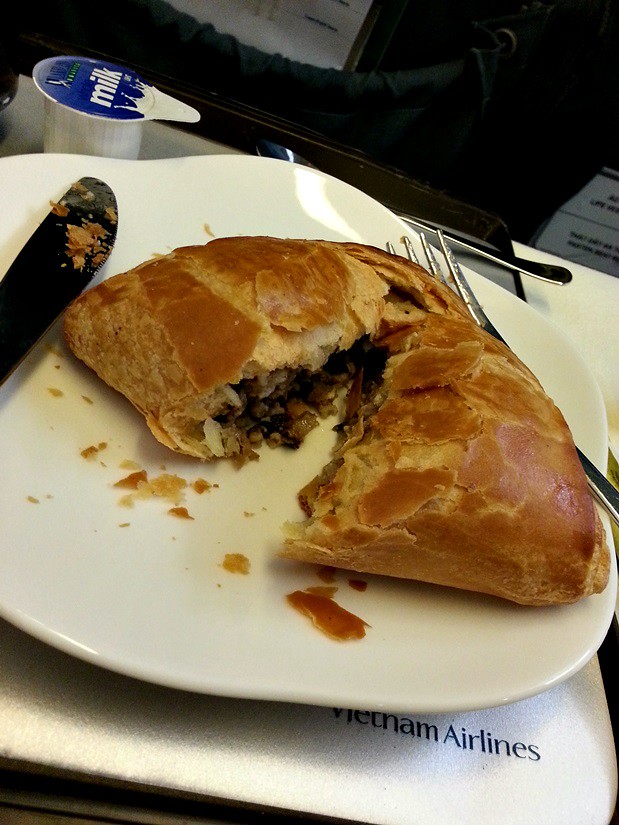 Hot drinks were also offered and I went for a tea. We simply loved the lotus-designed teacups! 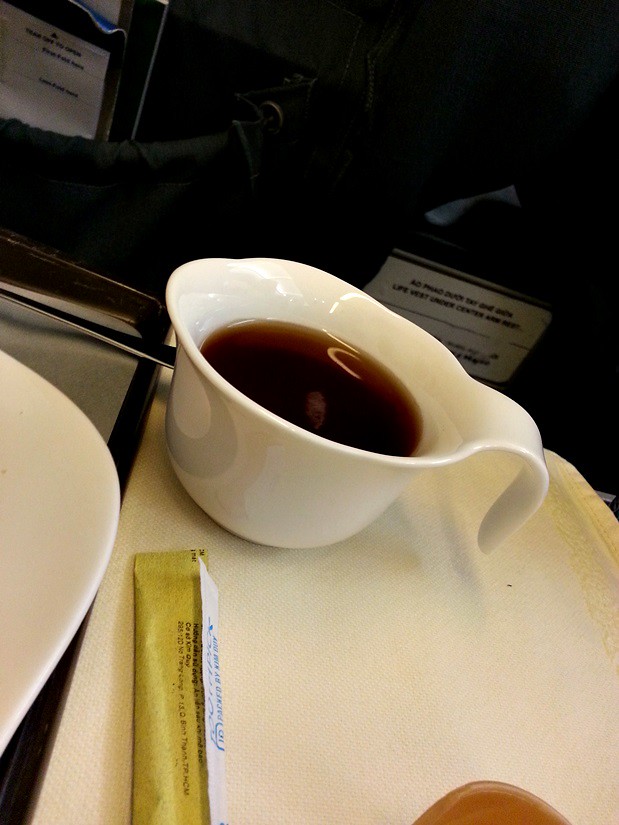 Finished everything. It was a slightly bumpy ride for the second half of the flight due to not-so-good weather. 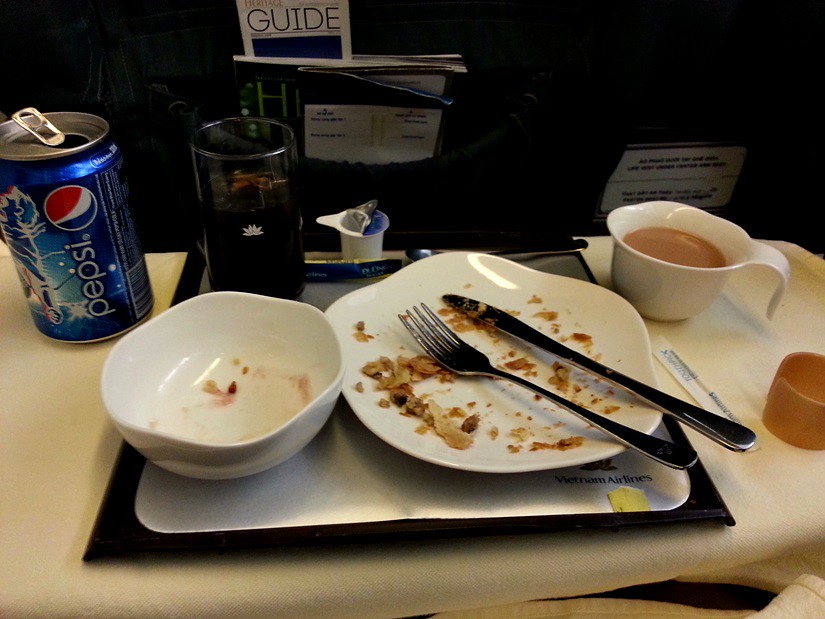 Service by the stewardess serving us was very good, but the same could not be said of the female purser, who remained in the galley area almost the entire flight, only appearing to check the cabin prior to takeoff and landing. Well, she did gave us a very fake smile when she passed by, so I guess she tried….


View of the cabin. No IFE on this sector and the flightmap which was supposed to be shown on the overhead screens was still stuck at the frozen image as on my previous sector. In the end, the purser just gave up on the flightmap and retracted the screens. 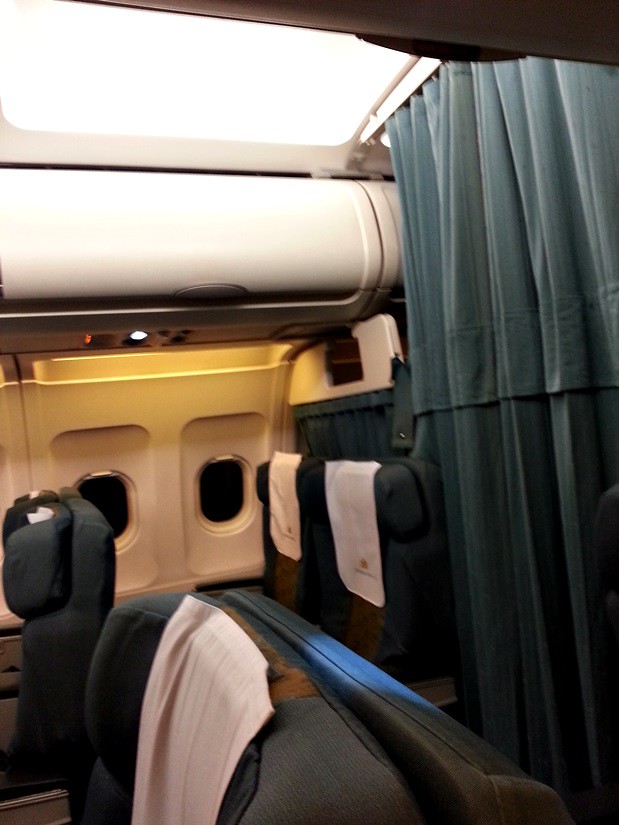 Offered another hot towel after the meal service and soon, we were starting our descent into Da Nang. 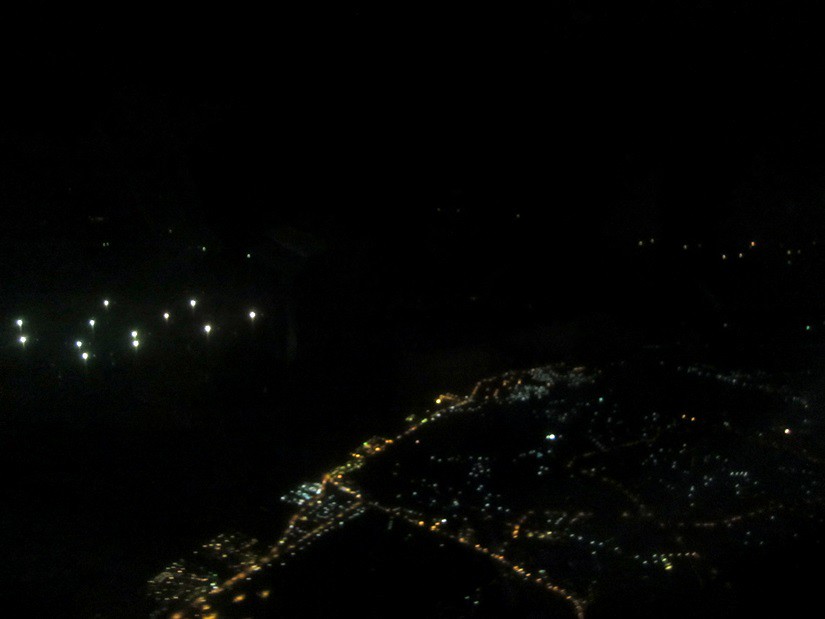 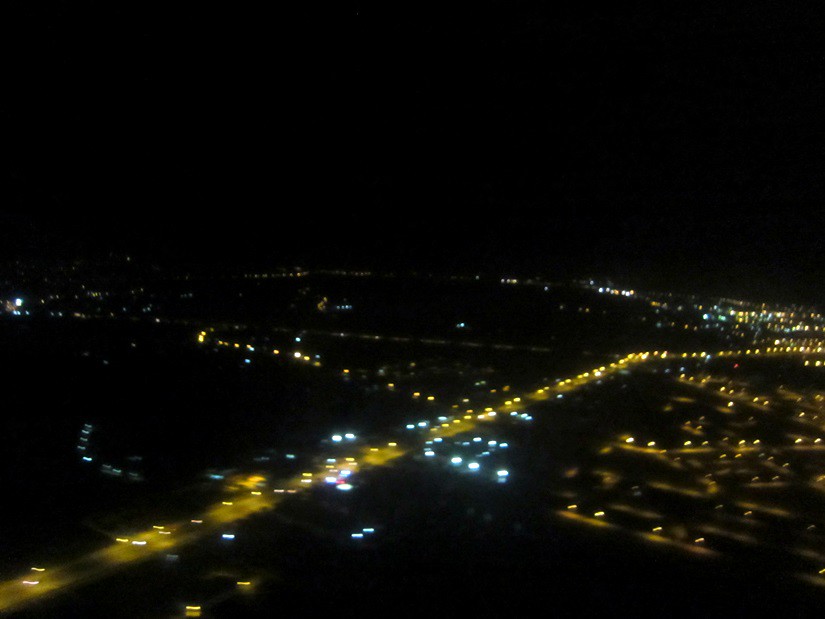 Landing in Da Nang Airport Rwy35R 10min ahead of schedule.


Disembarkation was through an airbridge this time round, and again economy pax was held back for us to exit the aircraft first. The stewardess thanked us for flying VN, but the purser just looked uninterested while standing at the aircraft door.

Down through the very new terminal to the baggage claim, and our bags were the first to appear after only a very short wait. Efficient! 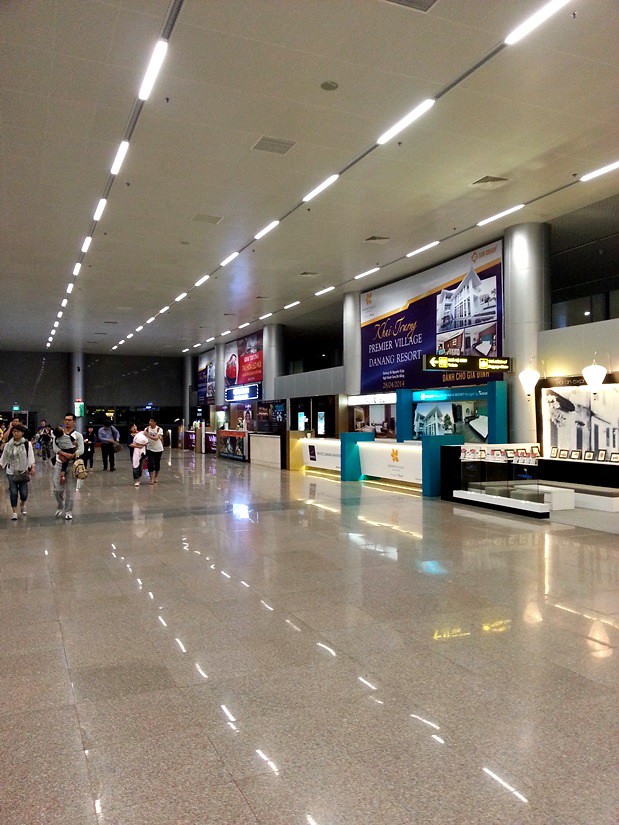 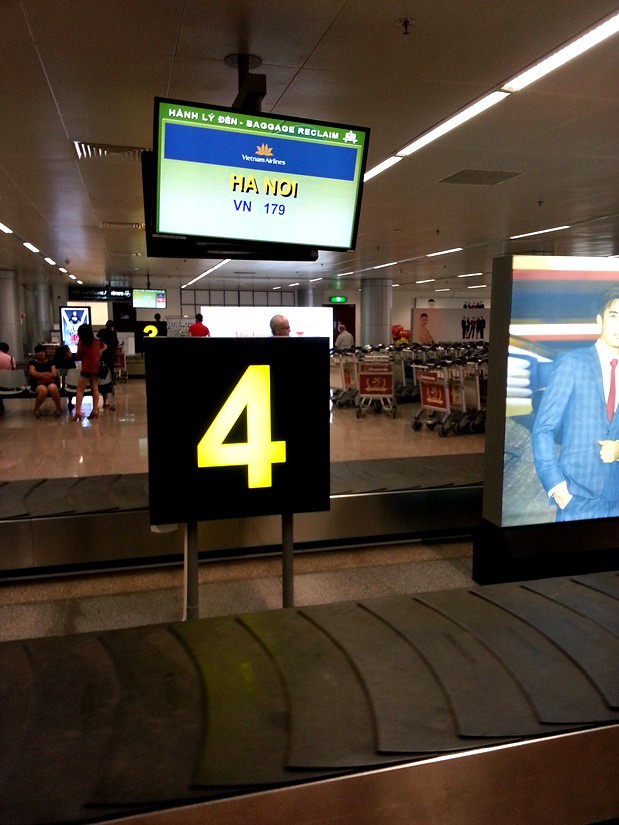 A hotel representative picked us up from the airport to transfer us to our hotel, as airport transfers were included in our room rate. We decided to stay at a newly opened 4-star hotel, Holiday Beach Hotel Danang, as it offers rather reasonable rates compared to the other luxurious beachside resorts. 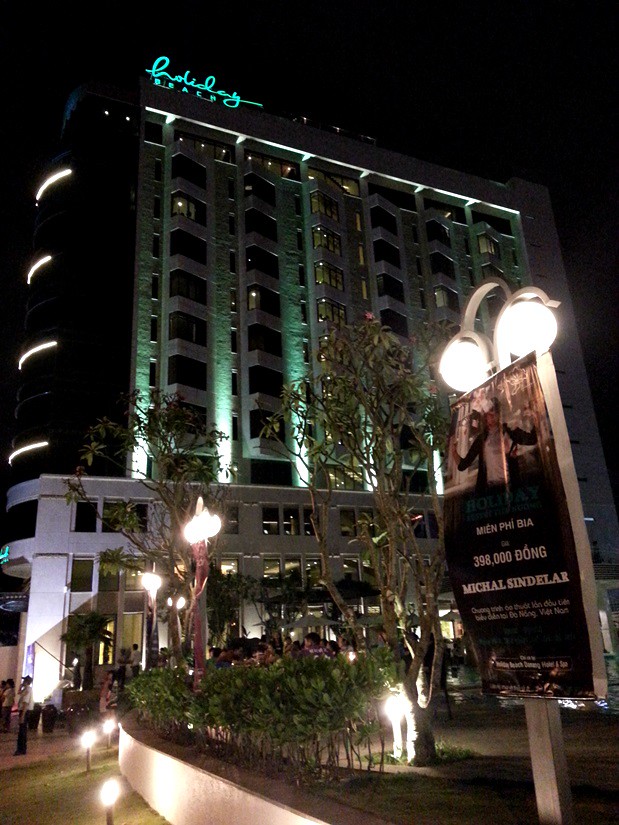 Our room, which was not too big but was very clean, functional and comfortable. 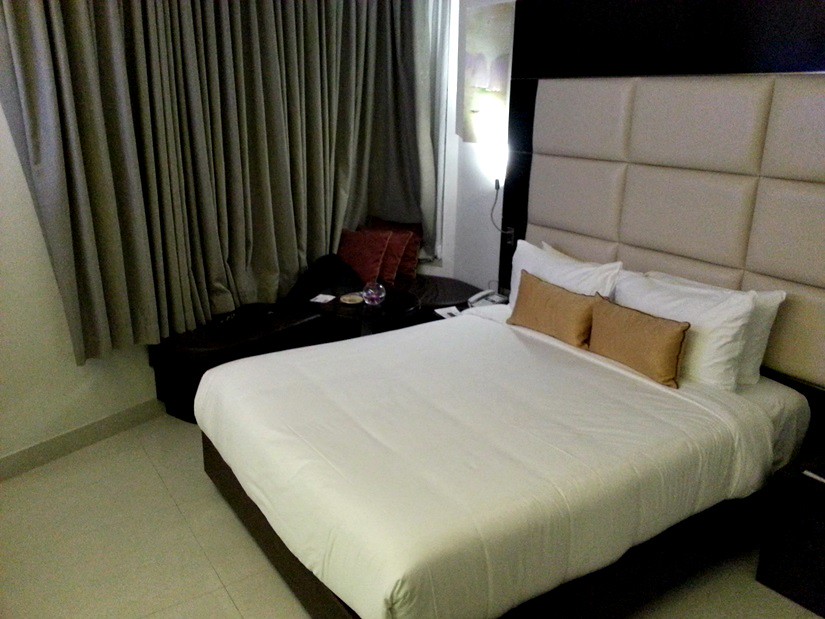 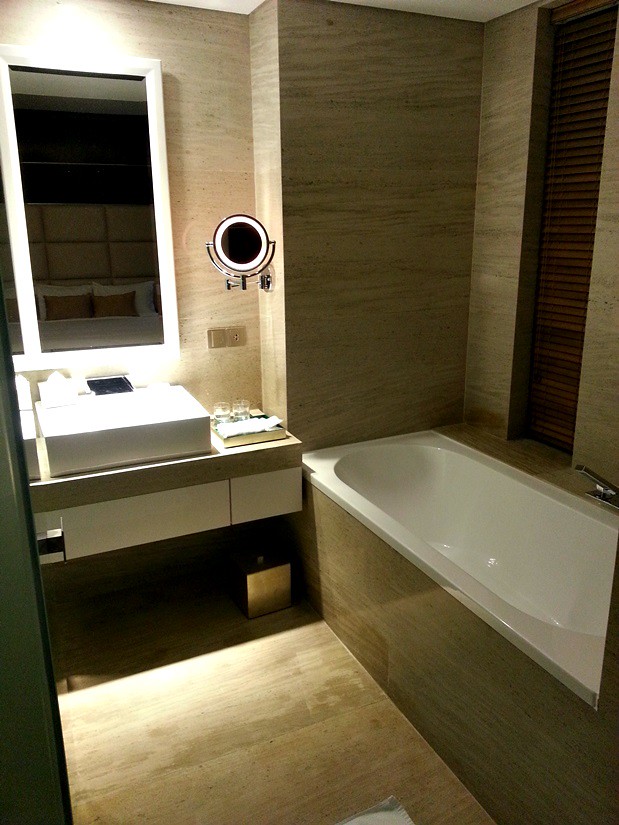 Hotel pool. There is another rooftop pool which I did not take photos off. 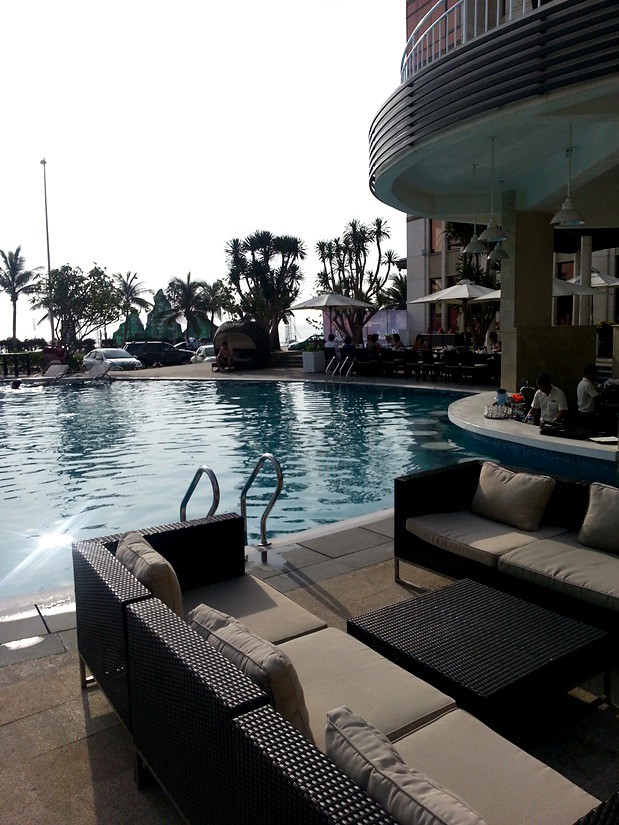 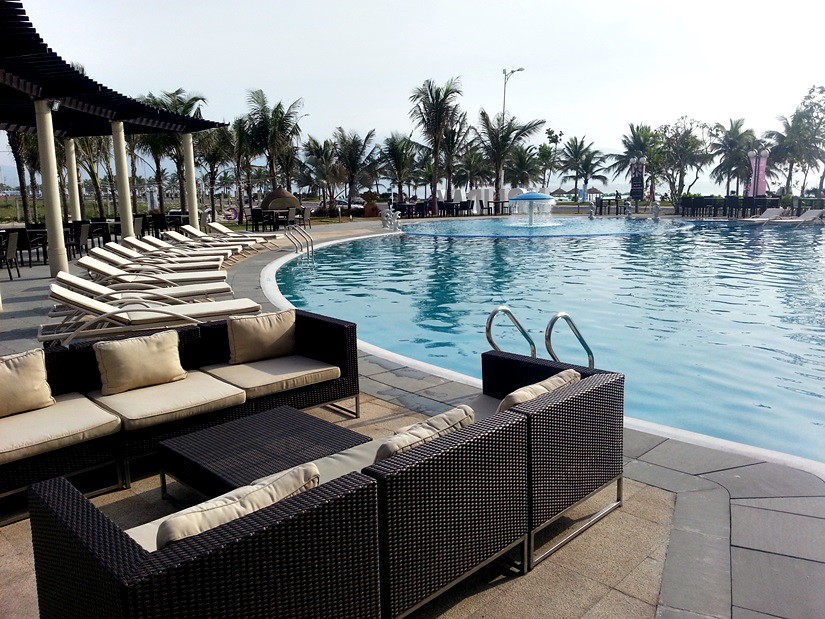 Each morning, we would have buffet breakfast by the pool. 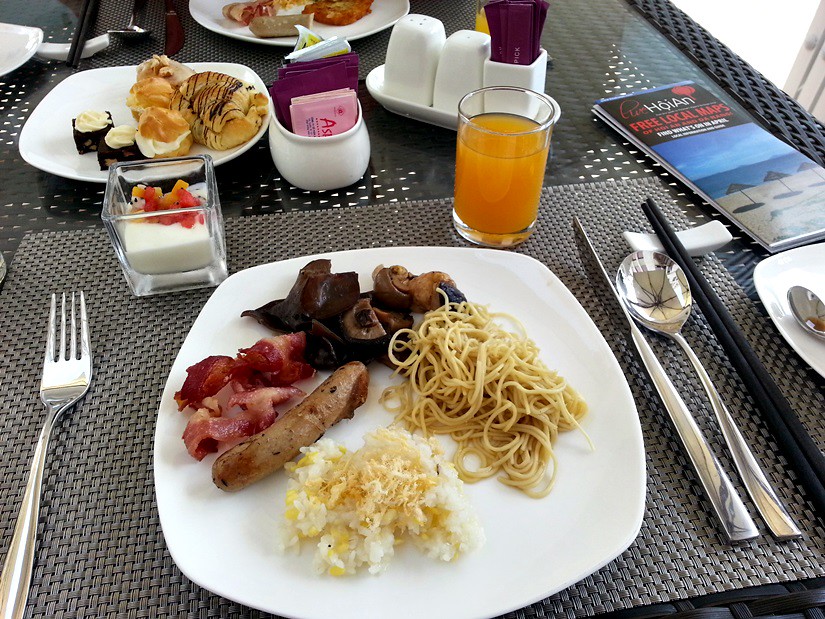 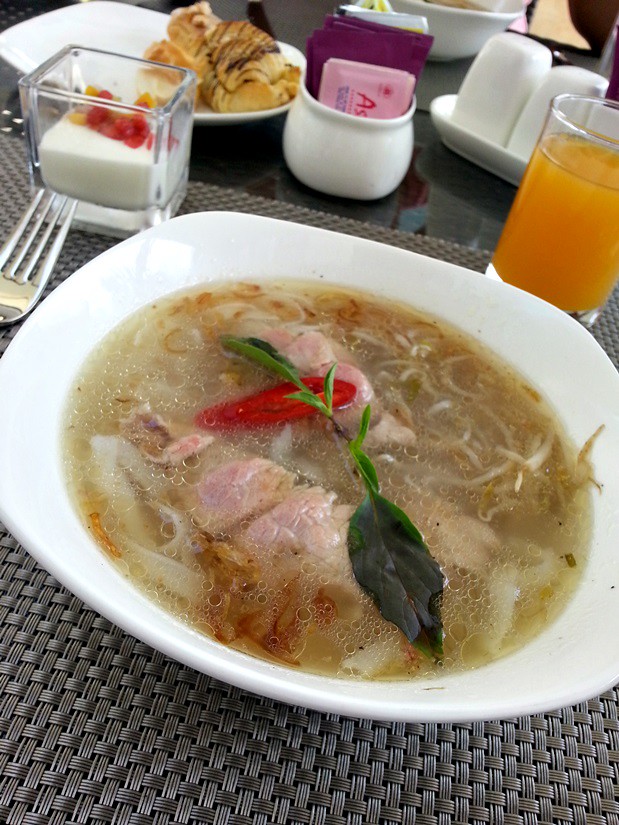 As we had reached Danang rather late on the first day, there was nothing much we can do other than resting at our hotel. On the second day, we made a day trip to the UNESCO heritage town of Hoi An, which is a 30min taxi ride from the hotel.

We first had a great lunch at a restaurant in Hoi An. 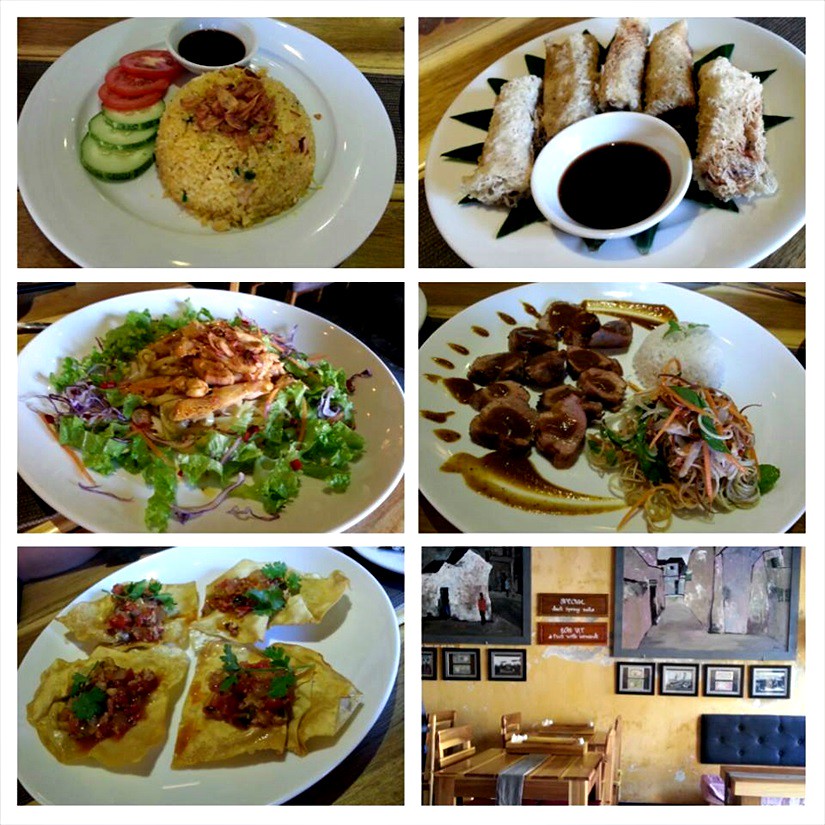 Followed by exploring the old town. I did find the place a bit touristy, with the old buildings converted into souvenir shops and cafes.

More scenes of Hoi An.

At dusk, the many lanterns are lighted.

And the best Banh Mi ever!

Overall, apart from the sulky purser, it was again a rather nice flight on VN with great service by the stewardess serving us. I was quite impressed with the catering in Business Class for such short sector as economy passengers were only given a bottle of water each. And with VN pricing Business at only a small premium over Economy on this sector, it was definitely a great deal!

The contributors of Flight-Report published 10 reviews of 3 airlines on the route Hanoi (HAN) → Da Nang (DAD).