#51 out of 80 Airlines A minimum of 10 flight-reports within the past two years is required to appear in the rankings. 539 reviews

This series will cover my annual vacation to the US in summer 2016, which contains 4 journeys in 3 different sets of tickets with 2 alliances.

As per my practice, I will reveal the routing as we go on. The series will be broken down as follows:

This is the first part of my flight from Newark to Alabama which I would have a stopover at CLT. This chapter is all about the boring US domestic flights, so there will be my travel bonus of Alabama in the second part of each report.

This chapter started back after I successfully redeemed the CX long-haul J ticket in Aug 2015. Only travel date was confirmed and I was flexible for my itinerary. Doing some googling, my initial draft plan would be the Northwestern:

a. Seattle: 2016 was Boeing’s 100th anniversary and it should have some special events in the Everett Plant.
b. Boise ID: at that time Delta in HK started a heavy and weird promotion flying to there as low as USD400 (this place is little known in HK…), which seduced me to travel there to find out why Delta promoted this place in HK.
c. Portland: because of Portlandia and the infamous PDX carpet lol

I explored different routing options on Googles Flights to construct a 4-leg AA/AS itinerary from EWR in order to complete 4 CX/partnered flights for my 2016 Marco Polo membership renewal. Of course, things could not be happened so straightforward…

In late Sep 2015, CX announced the changes to the MPC wef Apr 2016 which adopts a BA-like tier points system instead of miles/segments for status qualification. It entirely affected my planned itinerary which was 100% impossible to meet the new MPC renewal requirement. Moreover, from 2016 onwards I began my business travel to the US on *A. Those incidents made me not so keen on keeping the MPC membership and flying to the West Coast at my own cost.

Therefore I scrapped all my initial travel plan and kept looping on the Google Maps to explore other attractive places. Suddenly one day in Mar 2016 I was aware the state shape of Alabama looks kawaii, which encountered me to visit there. At Newark both UA and AA do not have direct flights to Alabama. Even though my UA Sliver status gives me one free checked bag, I opted AA (my favorite livery airline^^) because of the UA’s unfavorable schedule and routing to Alabama.

Previously on last report, I had my OLCI once arrived at my hotel after the HKG-EWR flight and I chose the window seat 20F.

The next day I woke up early and had my breakfast in the hotel.

Then I went to recharge myself. The hotel should be very care about my health as it installed a sprinkler next to the entrance of smoking house lol

I took the hotel shuttle to the airport. I was dropped at Terminal A 2 hours 15 minutes before departure. 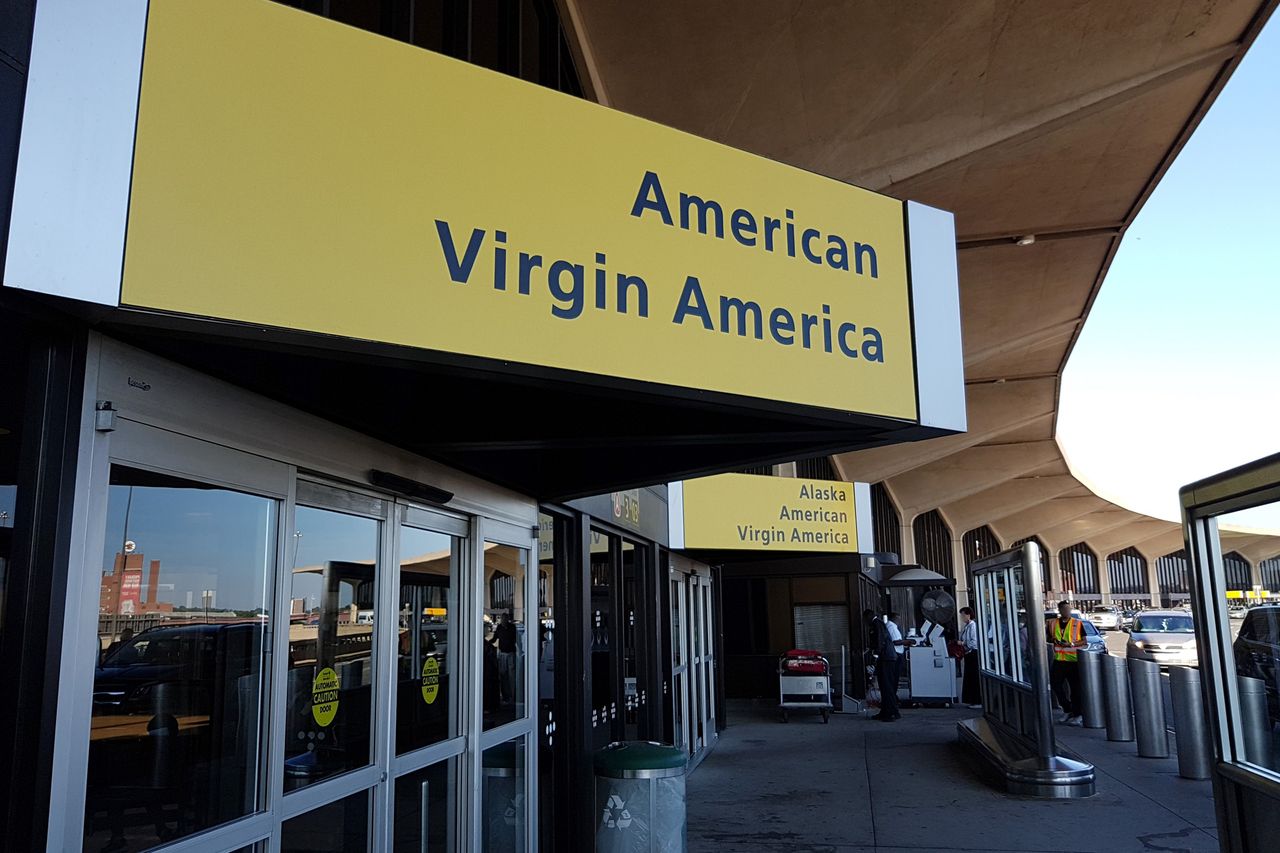 I headed to the American counters. Several passengers were queuing but the lane was not long.

Since I needed to pay for my checked baggage I preferred check-in at the counters rather than the kiosk. 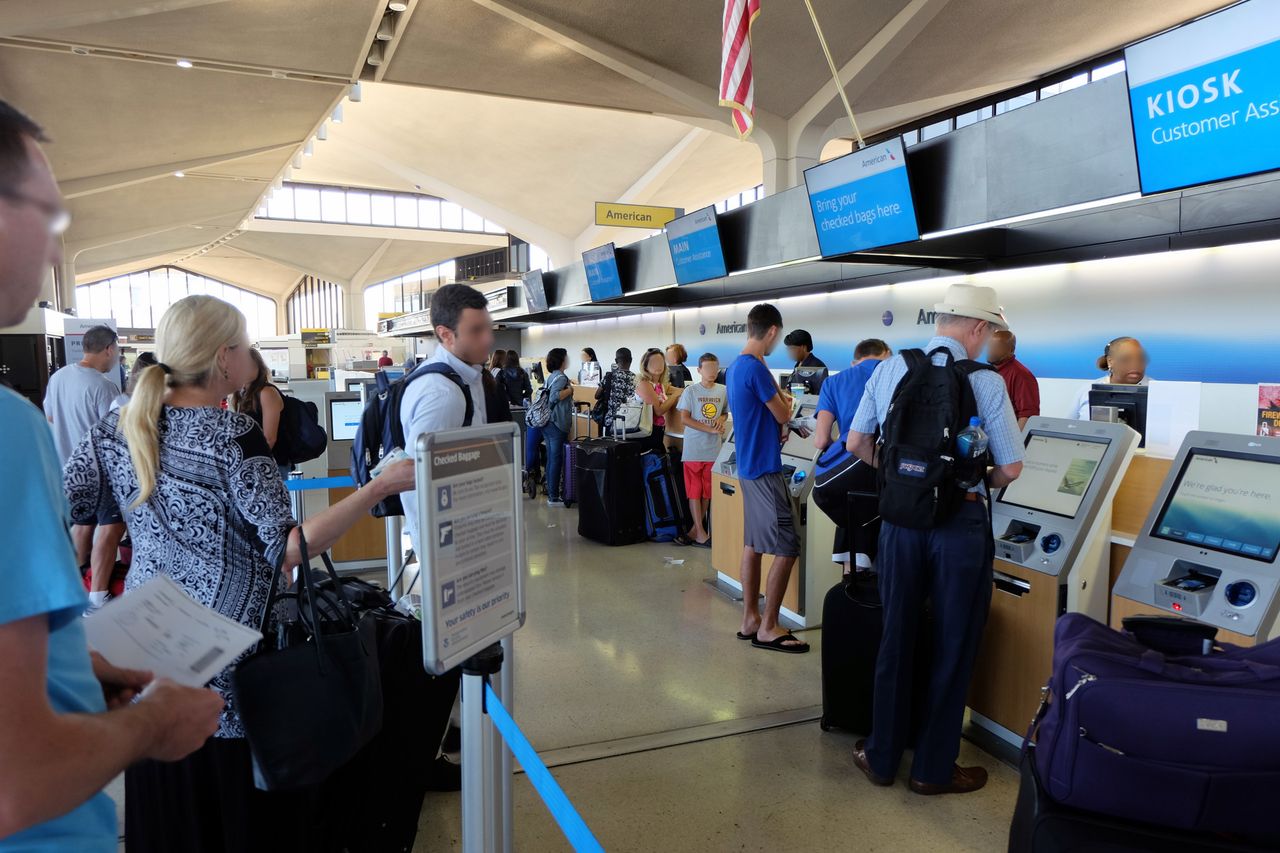 About 5 minutes later I was greeted by the agent. I handed my passport and credit card to her. She swiped my card, tagged my baggage to the final destination and handed me my travel items back. My boarding pass.

Still had time after check-in, I went outside for another break.

And then walking around inside the Terminal A. The United counters

Passing through the shopping corridor

So many AA wheelchairs

Time to the A3 security checkpoint.

The FIDS at the TSA entrance. It showed my flight had an 10:29 departure from Gate 36 on time (in the top of the right FIDS).

My turn. The TSA staff said good morning and reminded I had to take out all the required items for the scanner check. In return I joked I was a law-abiding passenger. But once entered the scanner I got a "Beep". The humorous TSA staff replied that he knew I was nice and cooperative but please did not forget to take out my phone! Luckily mine is not a Note 7 lol I successfully passed it in the 2nd time.

Once in airside there is only one way to Terminal A3

The main lobby of Terminal A3. Passengers sat aside and waited

Strolled around the Terminal. The Port Newark and the Manhattan skyline .

Those VX and AS gates.

The ceiling lights show the age of EWR

A coffee shop in the central lobby

There are several charging desks in the Terminal

Finally our bird (N934NN) arrived and the agents came to work. Those standbys queued immediately. The FIDS showed that the aircraft would do a turnback to CLT.

What attracted me was the conversations between father and son

Later the father’s colleague came and chatted with the pair.

Thanks to the late arrival of our aircraft, boarding did not start until the original time of departure. It was a mess since the disembarking had not finished and passengers were standing everywhere. I was in group 2 but could not find any boarding lanes.

A FA welcomed us at the door

I found my window seat 20F

View from the wing. A B737 to PHX at the adjunct gate. The AA tail was very spectacular^^

Although I love AA… livery, it doesn't mean that AA would also love me in return. Aw jeez the margin of my seat was dirty!

The seat back materials.

Today our flight was 100% full. There were 4 FA on this flight. They urged the passengers to settle down quickly for takeoff since a lot of passengers (including me) would have next flight in CLT.

Ironically, we pushed back at 10:53 but then stuck at the tarmac. The captain apologized that our plane had some technical issue and had to delay awhile since some paperwork was doing. Our neighbor to PHX even took off ahead of us.

We took off! An AI B77W parked at Terminal B

Nice weather today. My seatmates joined me to photograph the take off.

Once we leveled off, the cabin kept looping the Aadvantage Card promotion.

Beverage services started when we were over IAD. I apologized for the misleading caused by the picture below lol

I asked for OJ. A pack of snack mix was given, which was a little improvement from my 2015 experience ;)

Elliot Alderson was looking at us!

Soon we were descending.

Eventually we touched down at runway 23 on 12:14 which was still earlier than scheduled arrival time.

The FA gave me a very special thanks and goodbye^^

Last view of my bird

I’ll leave off this series here as I started my layover in CLT.

One of my travel places in Alabama is Birmingham, while all my friends mistakenly thought I went to the UK lol As a former history student, I always like to revisit the city’s past story.

Birmingham is previously one of the industrial and railroad center in the South. Thus I went to the Sloss Furnaces, a former pig iron-producing blast furnace.

After visiting the Sloss Furnaces I desired to walk back to the downtown.

I was listening Alabama Shakes in Alabama^^ 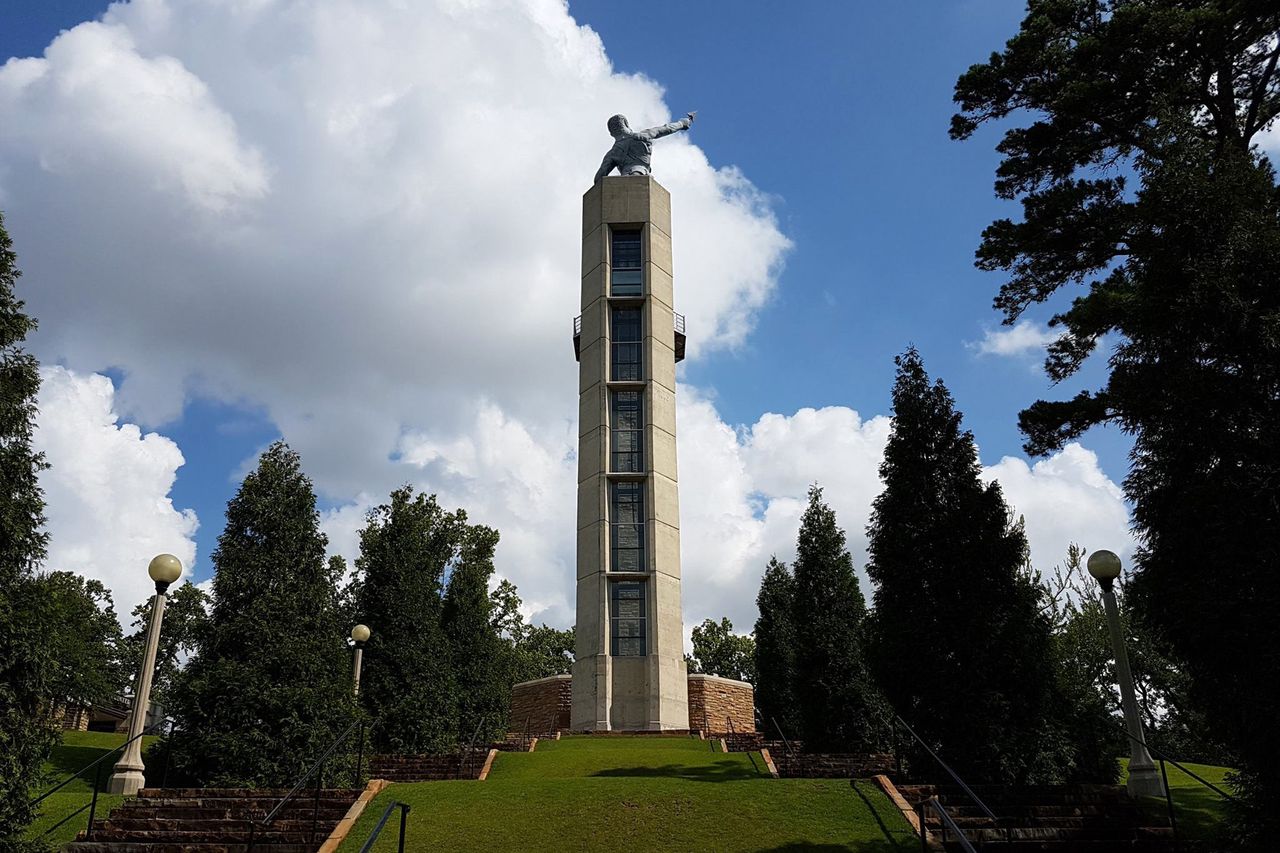 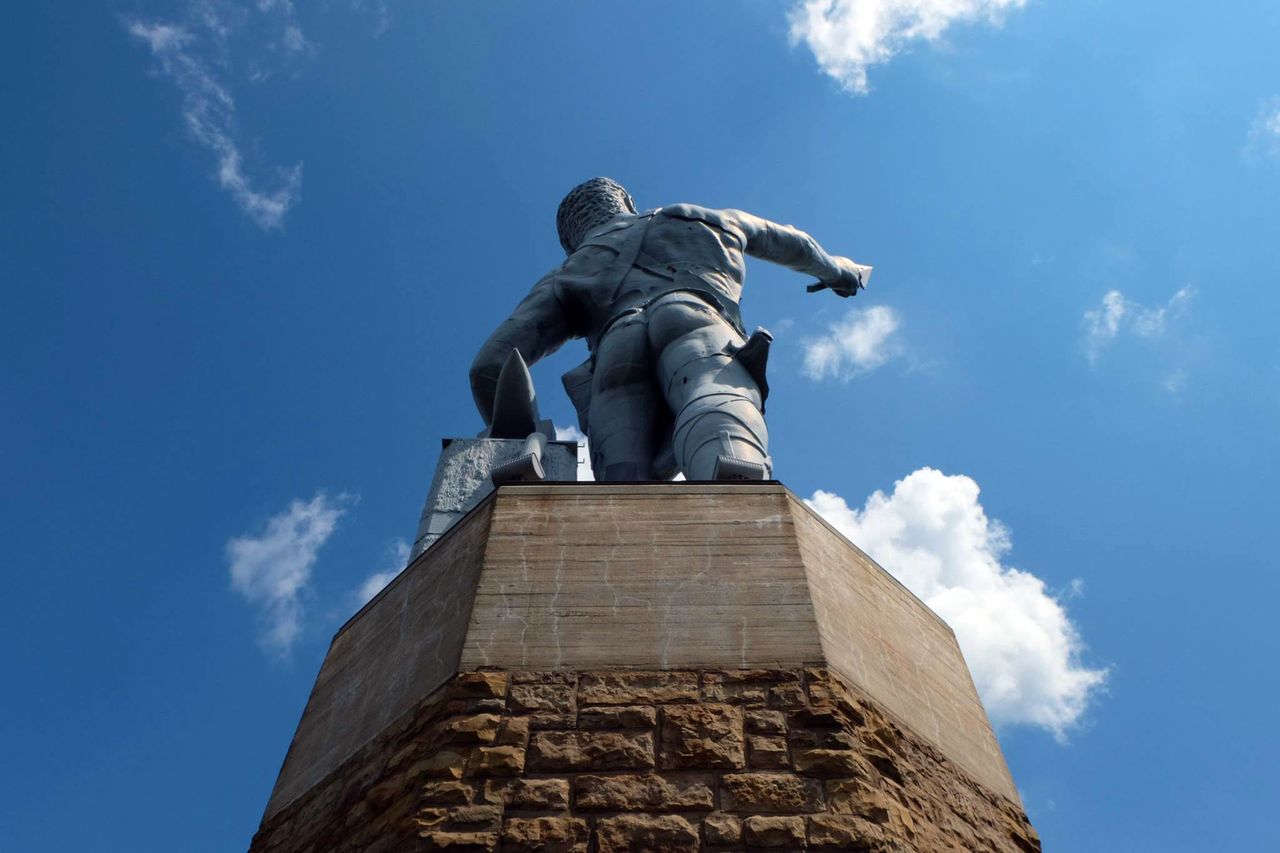 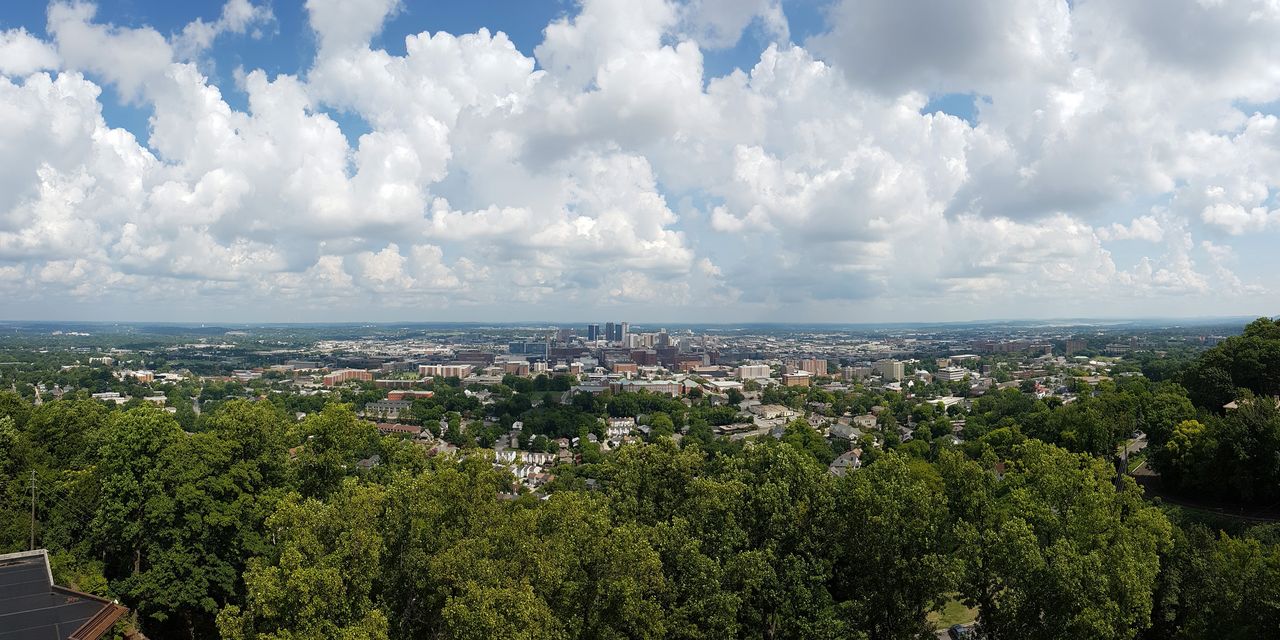 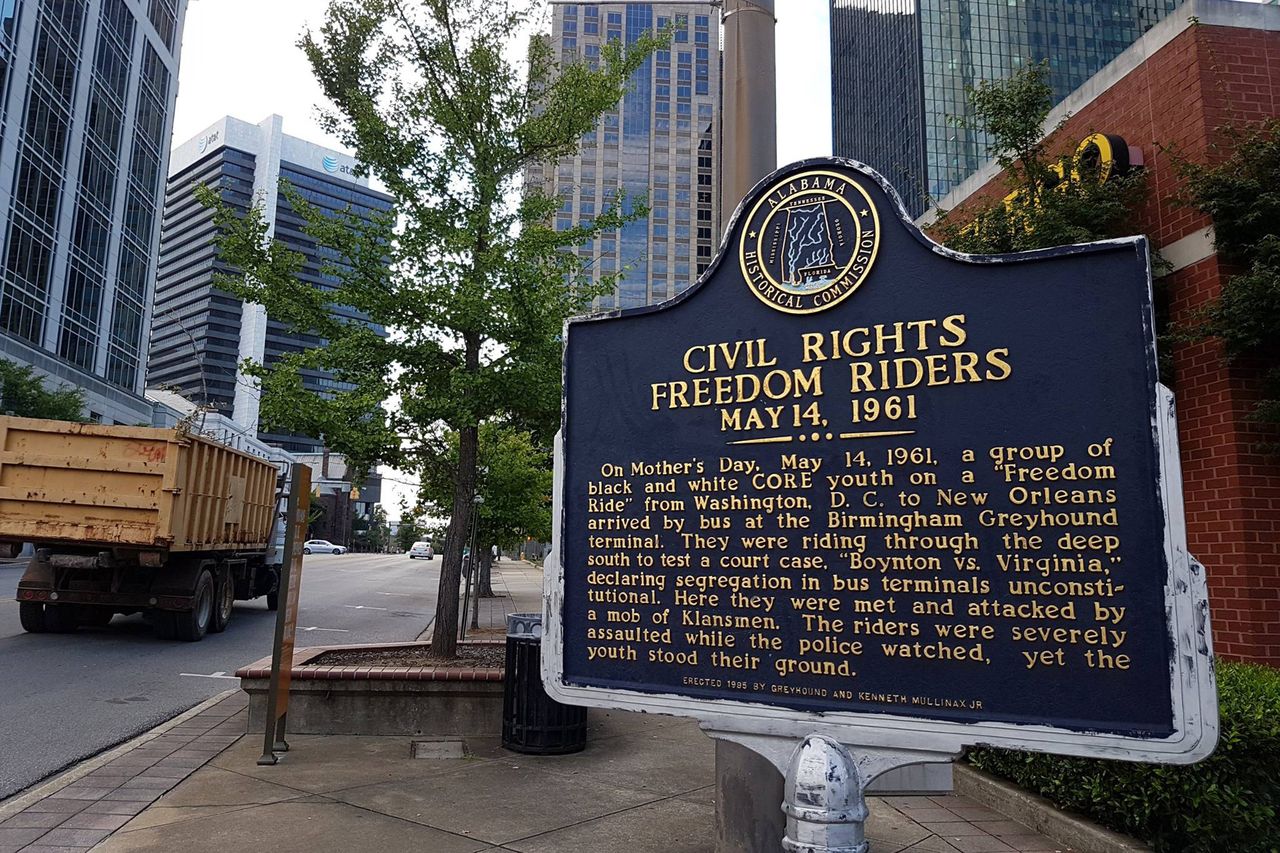 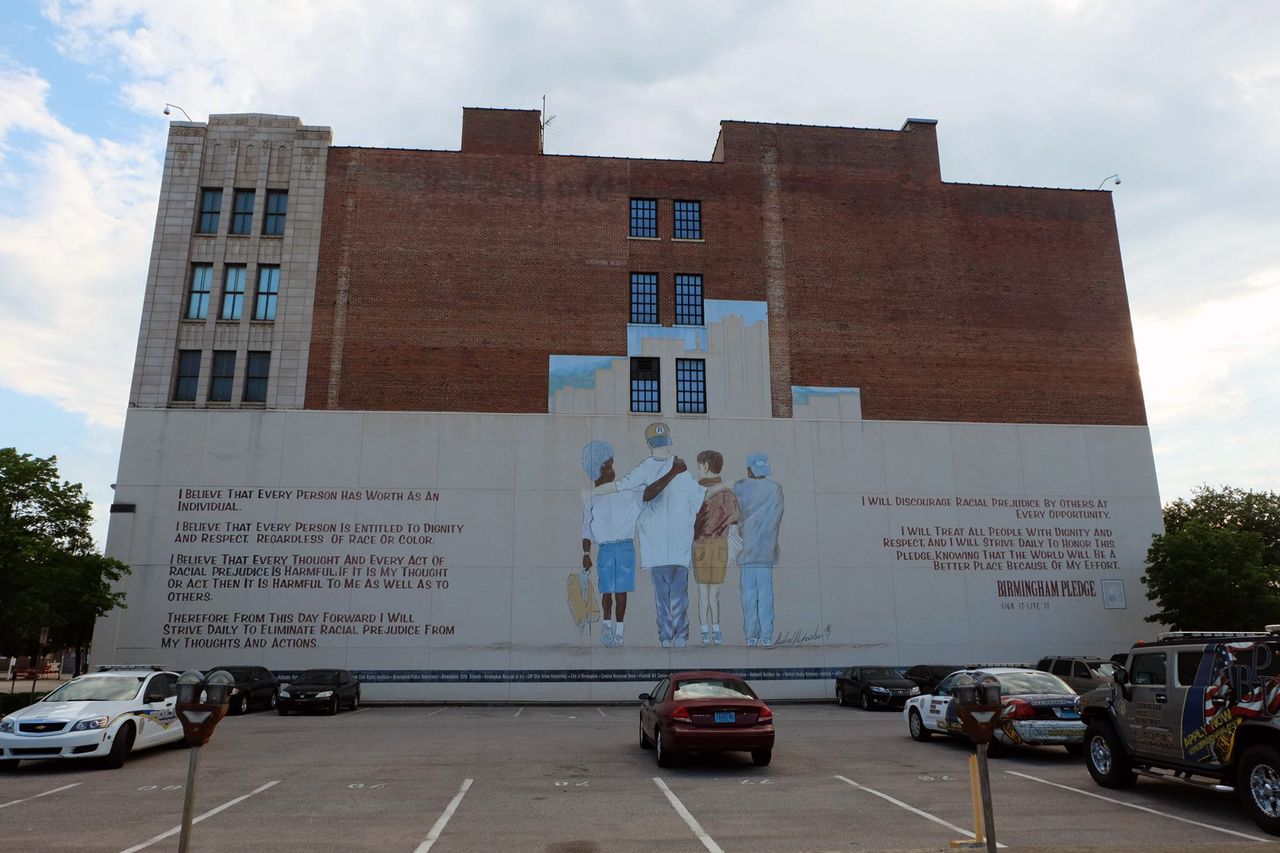 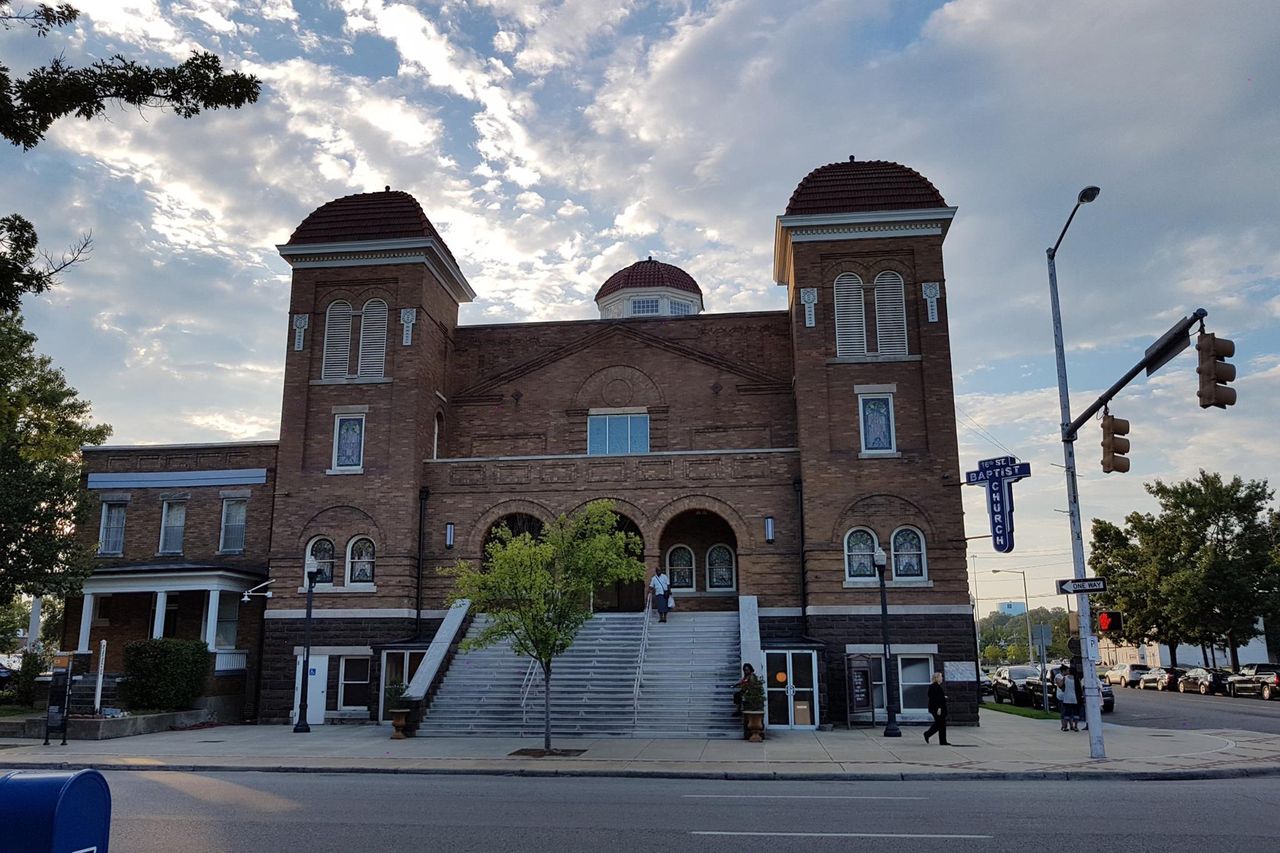 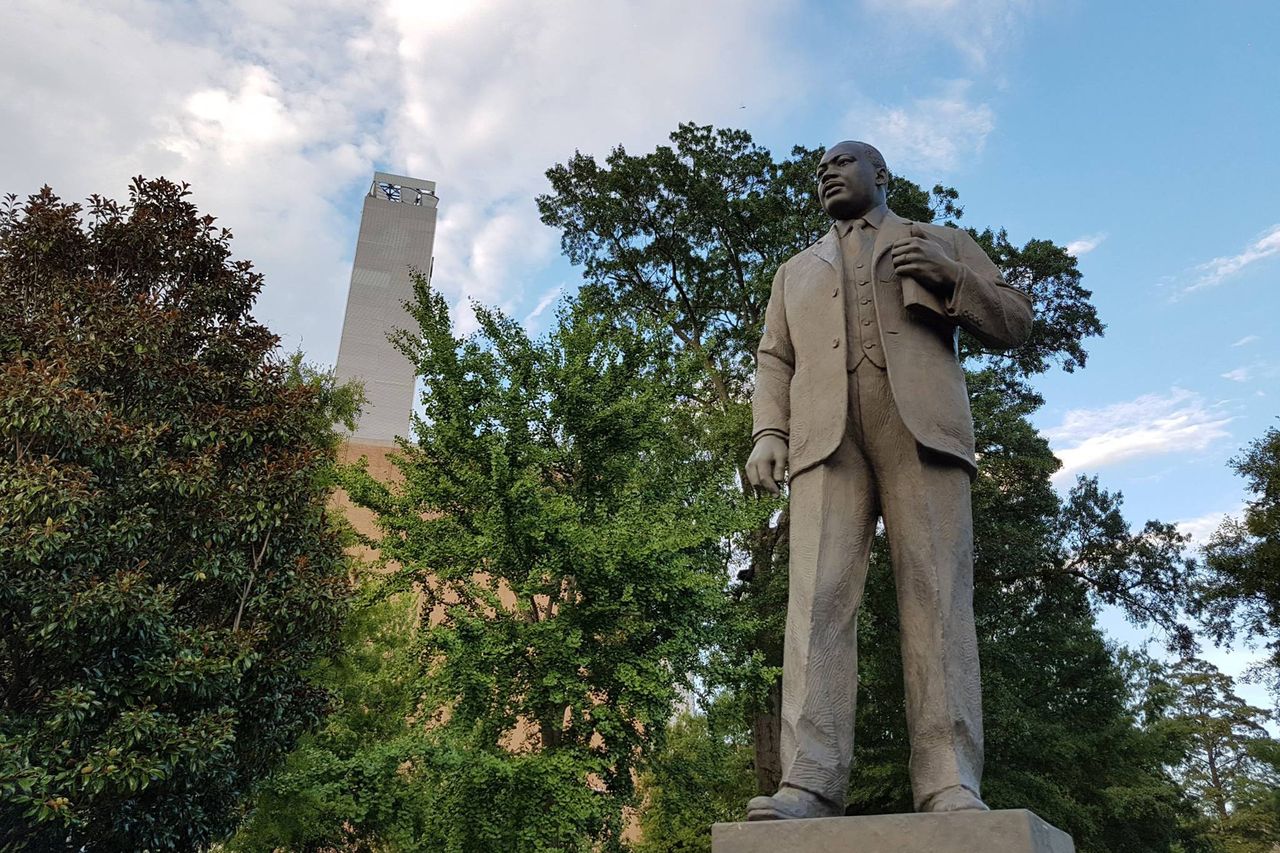 Five point south, the neighborhood of my Airbnb stay in Birmingham

Stunning sunrise view from my apartment

English Village and a nice café in that neighborhood 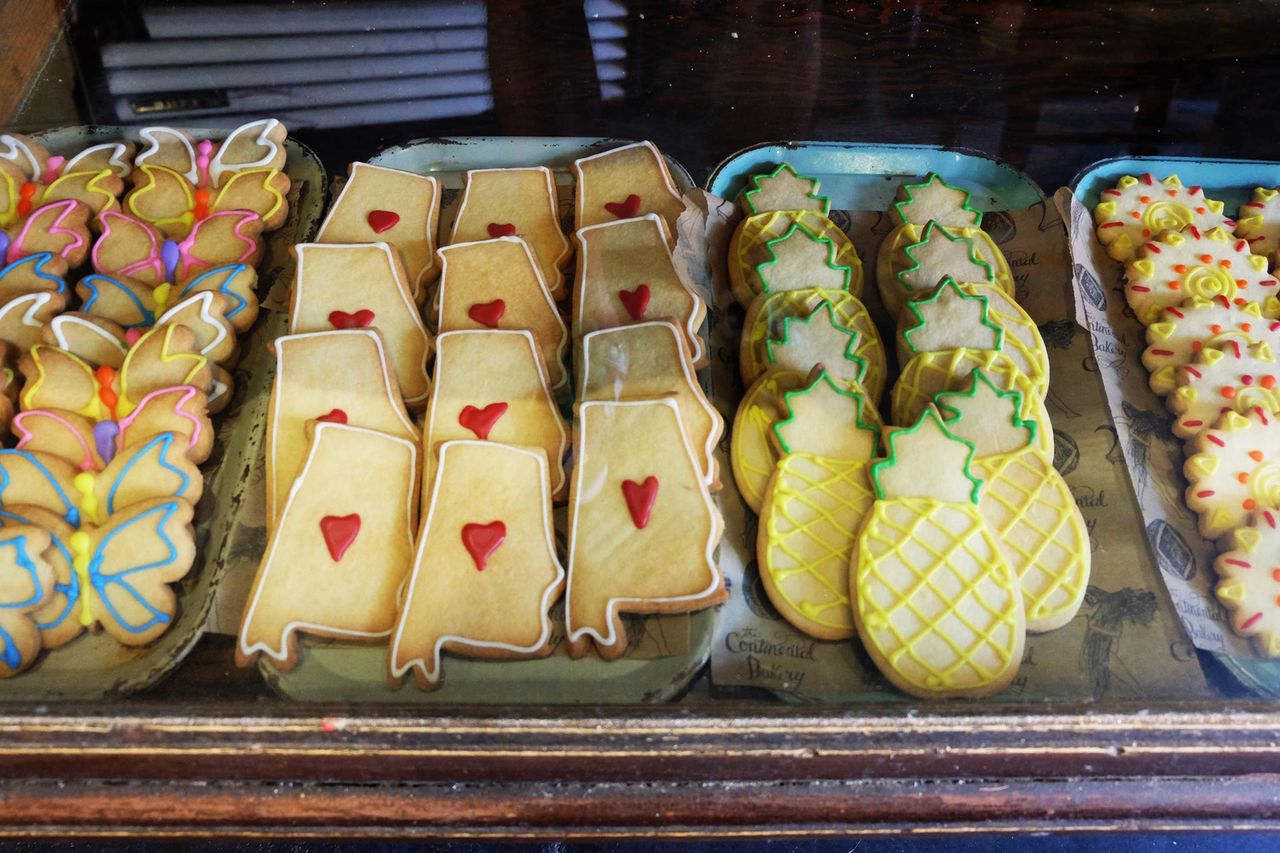 The Japanese Garden in the Birmingham Botanical Gardens. You can find a lot of pokestops and gyms there^^

The University of Alabama at Birmingham (UAB)

This is the second part of flight report and thanks for reading! You should probably know where did I fly next… 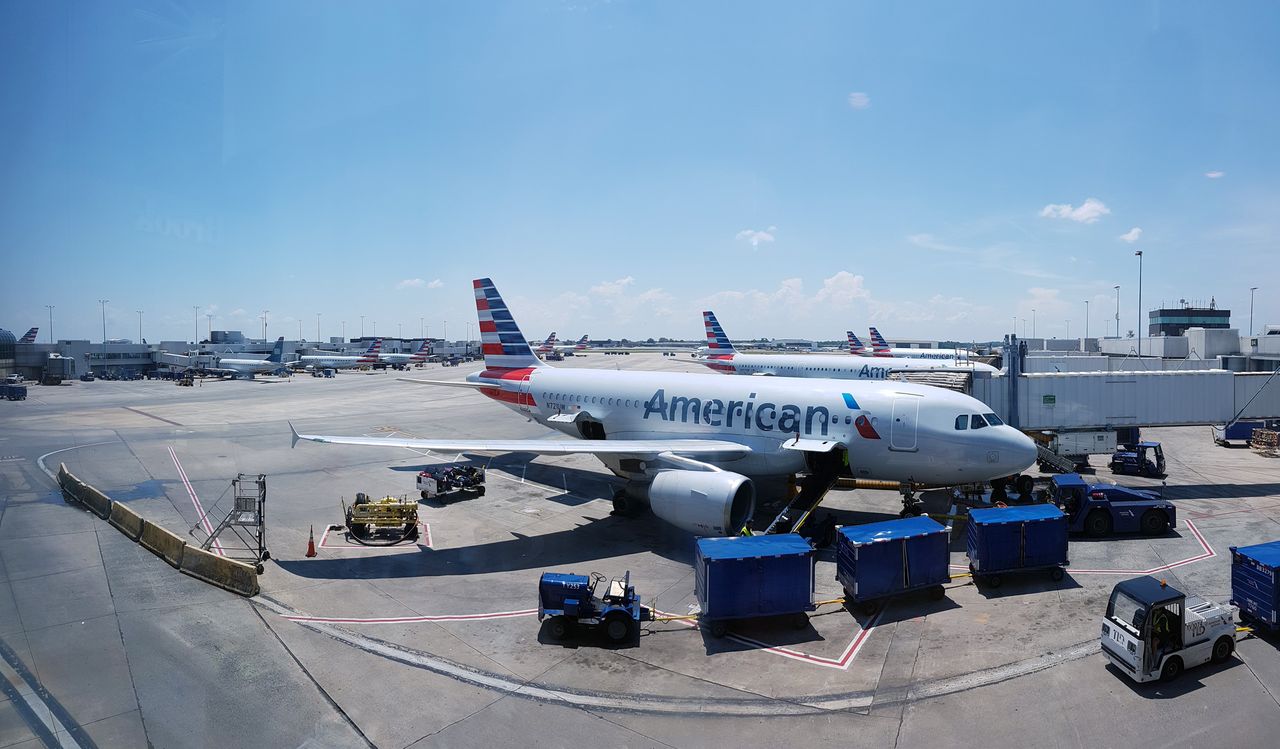 An uneventful domestic flight on AA. My seat is dirty despite it is comfortable. Standard seat pitch and seat back materials. The crews are friendly. We departed late but fortunately arrived on time.
For EWR, the Terminal A is dated but clean. Clearing the TSA is fast in a Saturday morning.

The contributors of Flight-Report published 3 reviews of 2 airlines on the route Newark (EWR) → Charlotte (CLT).

He wrote 24 reviews about 7 airlines and 16 airports.